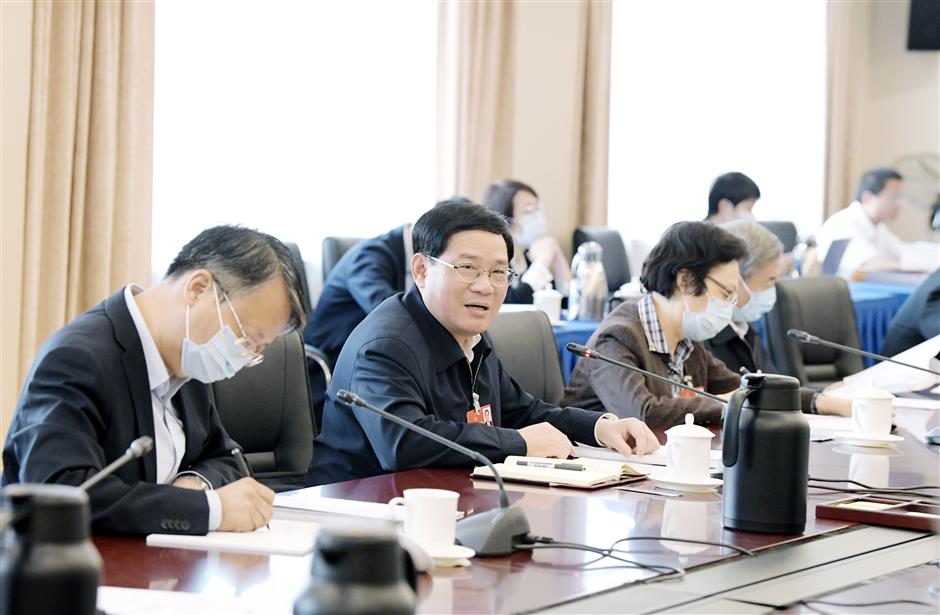 Li Qiang, Party secretary of Shanghai and a deputy to the National People's Congress, speaks during a group discussion.

Shanghai will improve its business environment based on laws and ensure equality, fair play and transparency for all market players, said Li Qiang, Party secretary of Shanghai, during the third session of the 13th National People’s Congress.

Li, who is also a deputy to the congress, made the comments when discussing a civil code draft set to be voted on during the session.

“The code will play an important role in the development of the market economy in China and the protection of legal rights for all civil subjects,” he said.

Li said Shanghai will strive to make the rule of law “a significant mark of the city’s core competitiveness.”

Gong Zheng, acting mayor of Shanghai and Li’s fellow deputy, said the government will improve its functionality and enhance its governing by the law with the new civil code to protect people’s rights and increase their welfare.

Other deputies from Shanghai also expressed their consent to the draft and some gave advice on revisions, especially on business-related issues.

Chen Mingbo, vice secretary general of the Shanghai government, suggested that the civil code further support businesses to secure credit, as China’s ranking in this regard in the World Bank’s annual Doing Business Report has dropped.

“Guarantees on movable assets are a major way for businesses to get credit, but current laws in China don’t offer enough support for this,” he said.

Chen Jingying, vice president of East China University of Political Science and Law and a business law expert, noted that the draft allows shippers to demand from carriers a refund of the freight fees in cases where the goods are destroyed due to force majeure, but in law, parties of a contract should be able to cancel the contract with no obligation, and as a practice of the international shipping industry, prepaid freight fees are not to be returned in any case.