Traffic restrictions will be in place from Friday night on parts of the middle and outer ring roads in Pudong to allow construction of the Jiyang Road Expressway.

The new expressway will have six lanes on an elevated section and six to eight lanes on the ground. The elevated part will have on-ramps and off-ramps on Tongyao, Yaohua, Yangsi, Shangpu and Luheng roads, according to a plan released on Monday.

On completion next year, the expressway is expected to relieve pressure on Lupu Bridge, which is connected to the North-South Elevated Road, one of the city’s busiest roads.

It will allow drivers to quickly transfer between the bridge, Longyao Road Tunnel and the middle and outer ring roads. Together with the current North-South Elevated Road and Yan’an Elevated Road, they will form a new cross-shaped traffic network in downtown Shanghai.

The work will also release development space for the Huangpu River waterfront in Pudong, according to the district’s construction and transport commission.

Du Yuliang, a commission official, said: “Along Jiyang Road there is the former Expo site and other newly developed areas such as Pudong’s New Bund. So, the construction provides major support facilities for urban renewal and city development.”

Nearly 4,500 vehicles pass along Jiyang Road per hour at peak times, far exceeding its capacity, according to the city’s transport authority. The elevated expressway over the road will double its capacity.

As of early this month, half of the elevated road had been completed. Work has also finished on nearby Hanlin, Jiming and Changqing roads.

The construction that starts on Friday is on three key parts of the project, affecting traffic on Lupu Bridge as well as the middle and outer ring roads for seven months.

The Lupu’s approach bridge on Jiyang Road will be elevated to connect with the new expressway. During construction, the Jiyang Road section of Lupu Bridge will be suspended.

The interchange and the Huaxia Road W./Shangpu Road sections of the Middle Ring Road will be renovated and some nearby ramps shut.

“We have put up and pulled down 501 traffic signs to ease congestion, and 23 nearby roads will be involved for drivers to make a detour. We have optimized our plans to minimize the impact on residents and drivers,” said district traffic police officer Zhao Yu.

In some sections, bus lanes will be returned to other vehicles, and a reversible lane will be added on Changqing Road’s section between Huaxia Road W. and Sanlin Road. Drivers will have to detour during the construction through the end of 2020. It is suggested they cross the Huangpu River, for example, through the Dapu Road and Xizang Road S. tunnels, rather than Lupu Bridge.

The north elevated road of the new expressway should be completed and open to the public by the end of the year, while the whole project is due to be finished in March 2021.

To minimize disruption to traffic along the road, over 90 percent of the parts are being prefabricated and will be assembled on site. 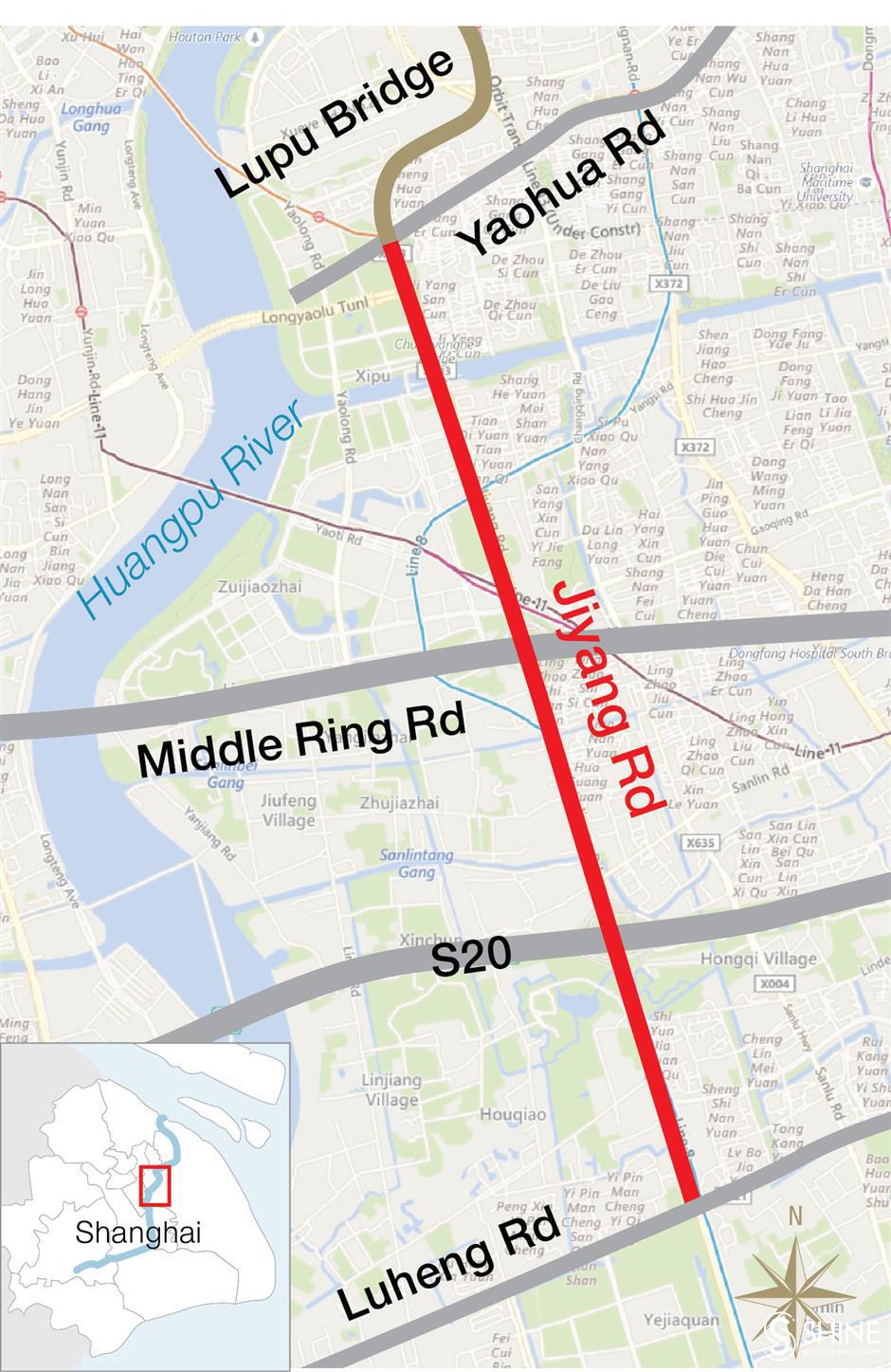