Xuhui cracks the code for successful management of stores and eateries 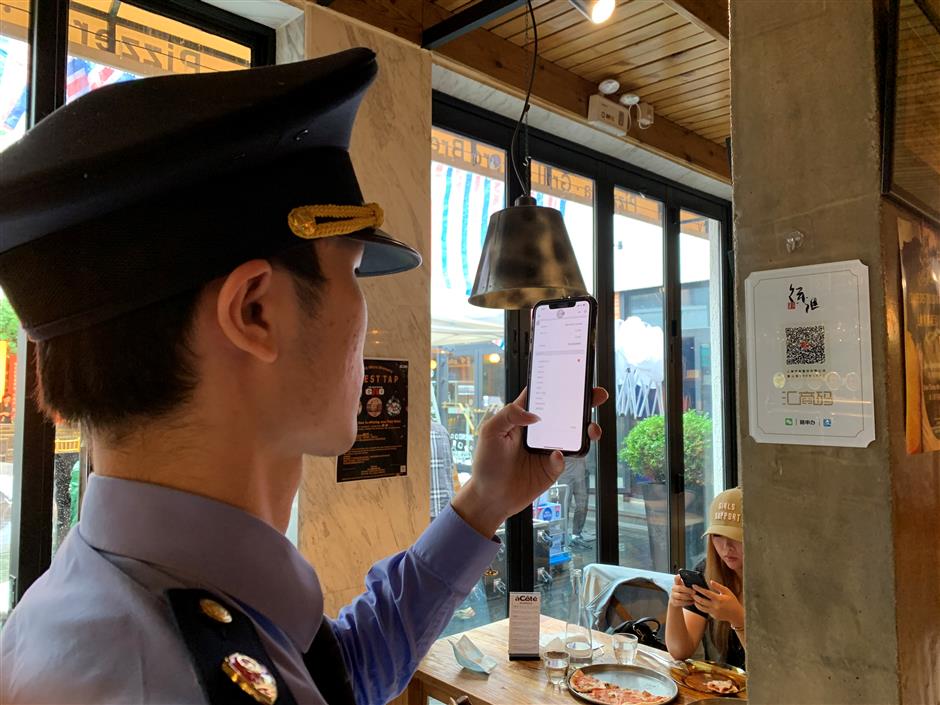 A law enforcement officer scans the Huishang Code at a restaurant in Xuhui to check its information.

An innovative identity code for street shops and small eateries has been launched by Xuhui District to enhance management amid a citywide campaign to boost nightlife business.

Each of the more than 7,000 stores and restaurants across the downtown district has had the "Huishang Code," the first of its kind in Shanghai, posted at the entrance.

Customers can scan the code on their mobile phones to check the licence and certificate, comments from other customers and the health conditions of the staff. Law enforcement officers can also check inspection records and other business information from the same code.

The business operators can also scan the code to upgrade their store information as well as check the latest policies and rules, said Fu Rongjun, deputy director with the Xuhui market regulation administration.

The food carts and stalls at the many night market that have popped up in Xuhui also have the QR code to ensure food safety and management, Fu said.

Xuhui has 235 streets, flanked by nearly 10,000 shops and small eateries. They've become a major attraction for tourists and citizens as well as key to the resumption of downtown business in the wake of the novel coronavirus pandemic.

Fu said all the stores will be included in the network of the Huishang Code, which has been developed based on the system of citizens' health codes, within two months. The practice is expected to be promoted across the city for the better management of the increasing number of small businesses.

"The code has become an effective platform for us to communicate with the government," said Tang Yuanqing, the operator of the Yuanlong Music Bookstore, a popular shop on the ground floor of the iconic Wukang Building (formerly the Normandie Apartments) on Huaihai Road M. "We can ask question or propose suggestions by scanning the code, and the authority will answer promptly."

The small bookstore opened in 1993 on Fuxing Road M. to provide material for teachers and students at the nearby conservatory. It soon became one of the most popular music bookstores in the city. The main entrance of the original stores closed in 2016 amid a crackdown on illegal structures. The new store, on the ground floor of the building, reopened last year and has more than 3,000 categories of books on music, art and philosophy. 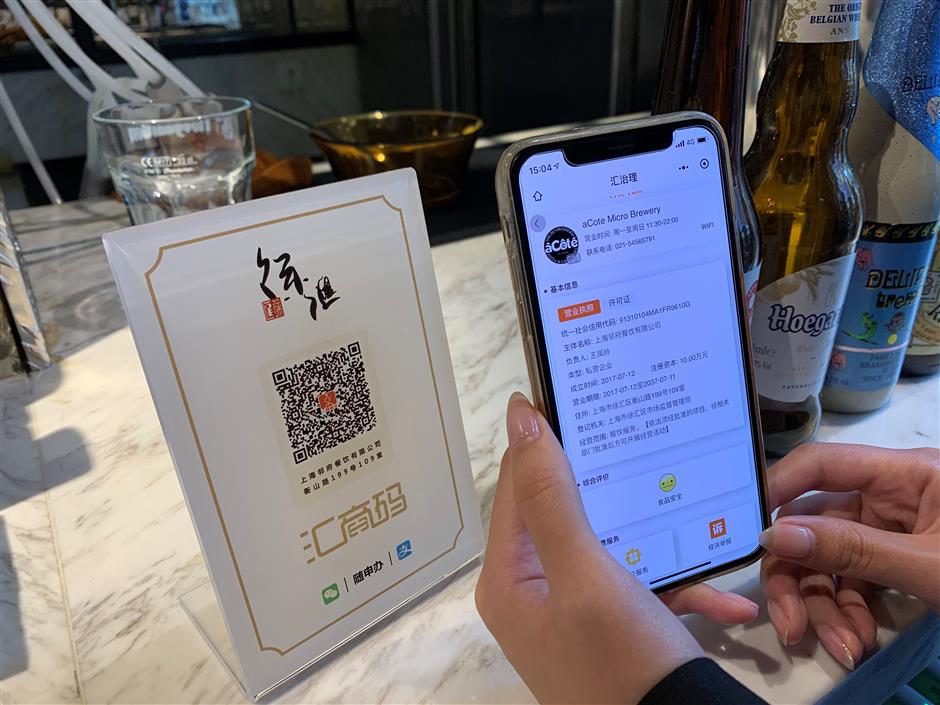 The code includes the licence and certificate, comments from other customers and the health condition of the staff, as well as the inspection records and other business information.

"We can also check anti-coronavirus measures through the code," Li said. The code has also been connected with the 12315 and 12345 hotlines for customers to lodge complaints directly.

The code was launched on Friday night at the Yongping Lane, an up-market commercial hub featuring bars and foreign restaurants. A night market with 22 stalls selling food and innovative products has been launched at the lane. All the stalls display their codes while serving customers.

aCote micro brewery, a popular western food restaurant serving Belgian beer at Yongping Lane, is among the first batch of restaurants to acquire the code.

Jiang Zhenshan, the operator of the restaurant, said the code has made it more convenient to check the health and whereabouts of its staff. He also uses the code to check the treatment of waste oil and the credit information of his restaurant.

The code is part of the city government's plan to integrate its administrative affairs and management into a single network, said Yan Bo, vice director of Xuhui.

The district aims to reach the development quality of world-class commercial streets, and contribute to Shanghai's ambition to become an international consumption destination, Yan said.