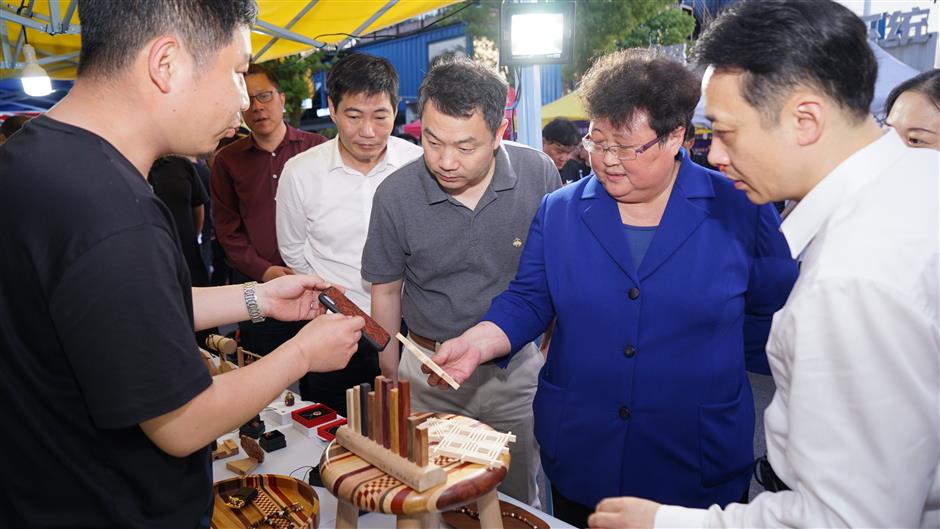 Many village houses and villas at the city's former iron-steel base have been developed into homestay venues. Visitors are invited to enjoy a traditional rural life while sampling authentic delicacies.

Popular restaurants in the Tangwan Village of Luojing, such as Pinshanfang and the Wang’s Courtyard,  are open late and serving the 10 most popular Shanghai rural cuisines.

Outdoor music and beer festivals are being held at Baoshan's landmark commercial hubs over summer, such as the Innovation Galaxy and Wanda Plaza. More than 30 stores and eateries will extend their operations till 2am.

Luojing has also launched a “starry night” project where visitors can stay in a cottage hidden within the agricultural town’s forest and farmlands to lie down look up at the stars. They are also invited to various agricultural events, such as hairy crab fishing and crayfish harvesting.

Children can visit the Mother’s Flower Culture Park, with more than 100 varieties of lilies, which represent filial piety in traditional Chinese culture and date back to Tang Dynasty (AD 618-907).

The Luodian ancient town will present weekend folk performances. The town dates back to the Yuan Dynasty (1279-1368) and was once the biggest marketplace in the area, known as “Golden Luodian.” The “golden” tag gradually faded away in the face of urban development. 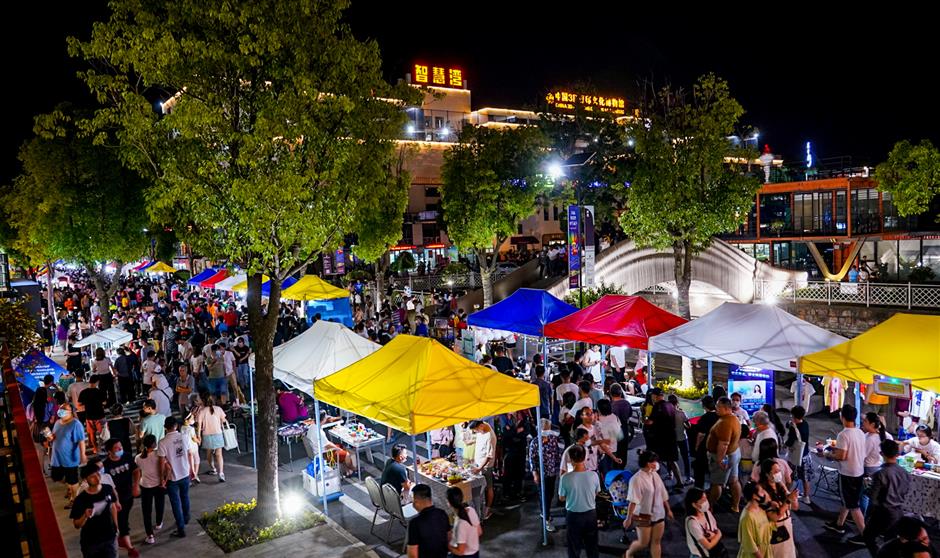 Many citizens and tourists visited the night market.

Immersive stage dramas, musicals and electronic sports games will be held at Innovation Galaxy and Wisdom Bay, along with other cultural activities to attract young customers. Many museums, such as the Shanghai Museum of Glass and the China 3D Printing Cultural Museum, will host night tours, while bookstores will invite customers to read and share opinions.

Many citizens visited the night market, one of the largest in the city, when it was launched at Wisdom Bay on Saturday night. More than 300 businesses have been invited to set up stalls at the innovation park. Bazaars, food carts and cultural exhibitions will be held at the market through June 27.

"I could never imagine that such a cool night market would open near my home," said Luo Tiantian, an office worker living in the Gongfu Community near Wisdom Bay.

The technology-savvy staffer said she was amazed by the many high-tech robots being showcased on the market. They are presented by several robotic start-up firms including CoinRobotics and Titan which are based in the innovation park.

The bay has been transformed from the former site of Shanghai’s No. 3 wool textile mill into the city’s first scientific and cultural complex.

The innovation park at 6 Wenchuan Road has been named Shanghai’s first popular science park. It is home to the world’s only 3D printing museum, more than a dozen artists' workshops along with over 300 global companies engaged in 3D printing, intelligent micro manufacturing, virtual reality/augmented reality and artificial intelligence robotics.

To help bring the economy back on track after the novel coronavirus outbreak, the night market at the bay is open free to all business operators without any lease or charge. Companies, street shops and restaurants are encouraged to set up stalls to showcase their products at the market. 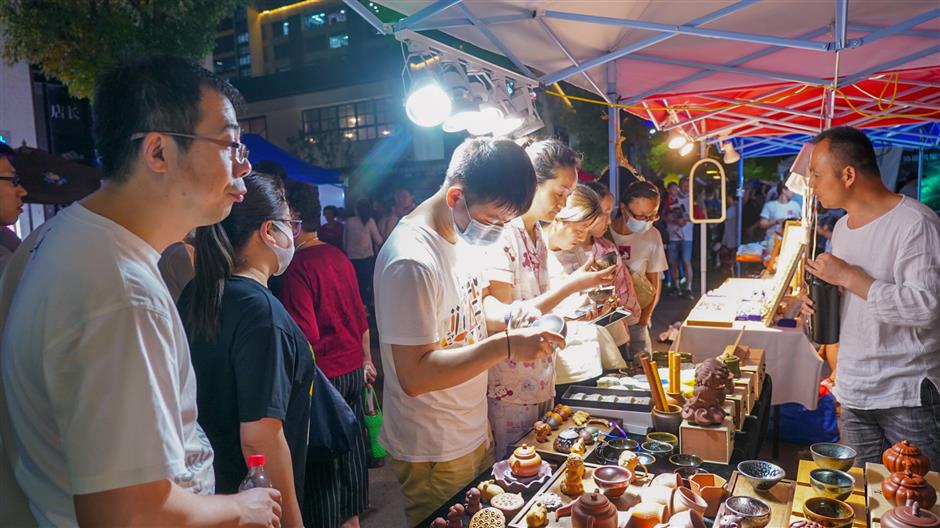 A handicraft master displays his wares. 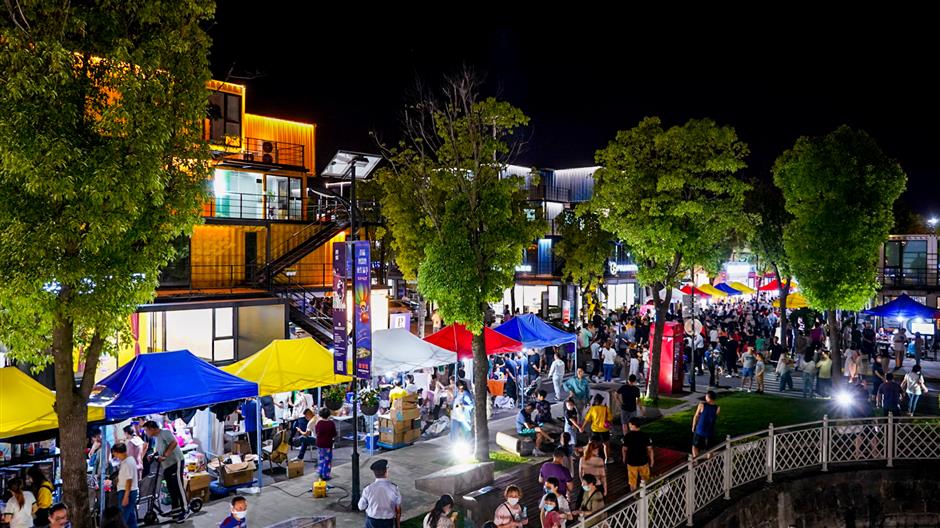 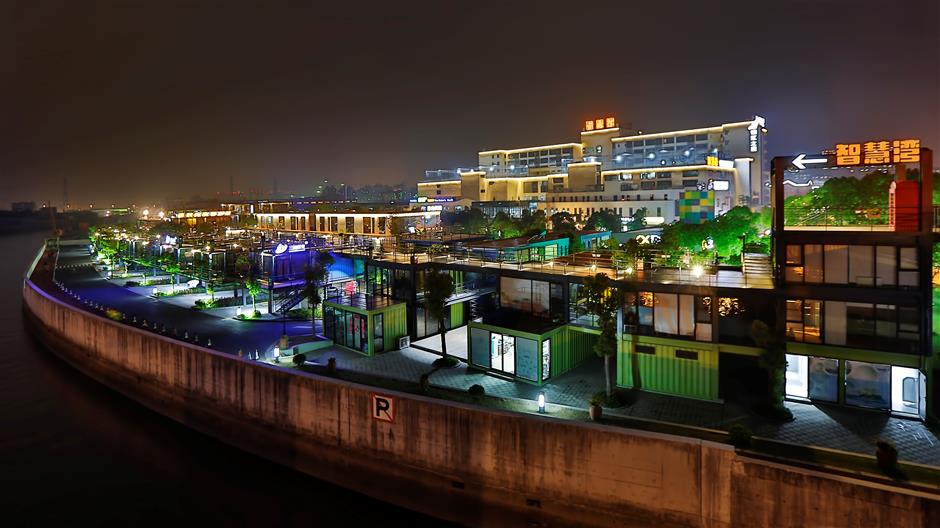 Wisdom Bay along the Wenzaobang River was lit up as part of the city's nightlife festival.