Both sides of the Suzhou Creek riverbank, a total length of 42 kilometers, will be accessible to the public by the end of this year.

On Thursday, Huang Yongping, director of the city's housing and urban-rural development commission, outlined the progress so far of the three-year greenway project for the creek.

Suzhou Creek, the biggest tributary of the Huangpu River, runs through central areas of the city and stretches from the Outer Ring to Waibaidu Bridge near the Bund.

“Due to historical reasons, both sides of Suzhou Creek banks have been occupied by enterprises and residential areas. The riverfront should be a public space that everybody can enjoy, so that’s what we’ve been working on in the past two years,” said Huang.

Currently, nearly 36 kilometers of Suzhou Creek greenway has finished construction. The next steps will mainly focus on some 2.9 kilometers of banks in Jing’an, Changning and Jiading districts.

Three neighborhoods in Putuo District built along the creek will also be open to the public after negotiation with residents.

Huang said that, apart from pathway construction, the project will put emphasis on improving the overall environment along the banks including road sanitation, lighting and public facilities.

“We wish to further escalate the experience and quality of the life along the pathways of Suzhou Creek. The completion of the project will be a gift to every resident in the city,” Huang said.

Each district along the creek will integrate its own unique characteristics with the renovation, such as the architectural restoration of the rowing club near Waibaidu Bridge in Huangpu, and the open waterfront of East China University of Political Science and Law in Changning.

Flood-control walls built in some areas along the creek have blocked people from enjoying riverfront views and that will be improved after renovation. On completion, these areas will all be open to the public except during the flood season.

In the meantime, revamp projects of the 33 bridges along Suzhou Creek will begin this year, including painting, new paving, nameplate replacement and installation of barrier-free facilities. 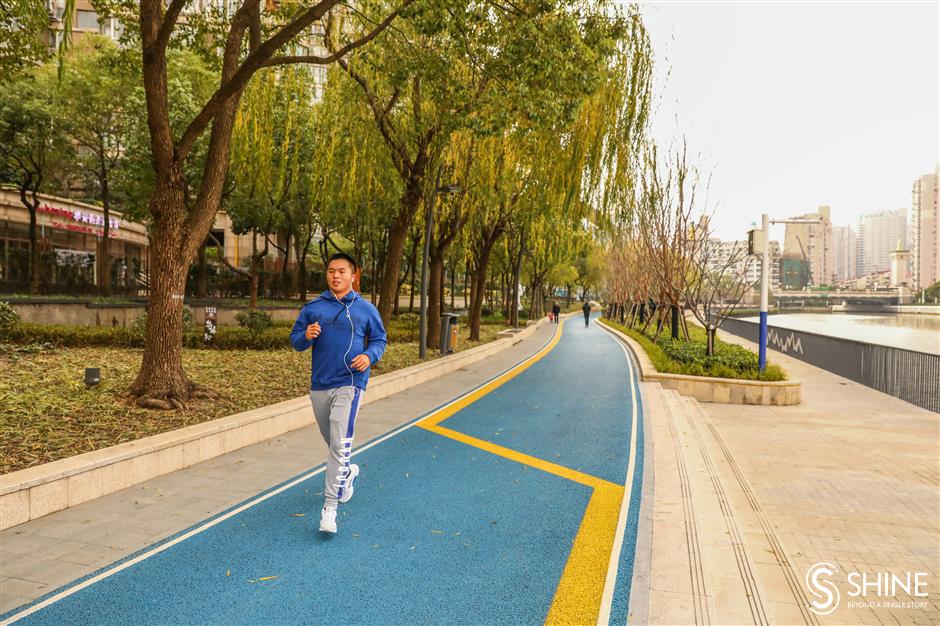 A jogger on the greenway along Suzhou Creek in Putuo District.