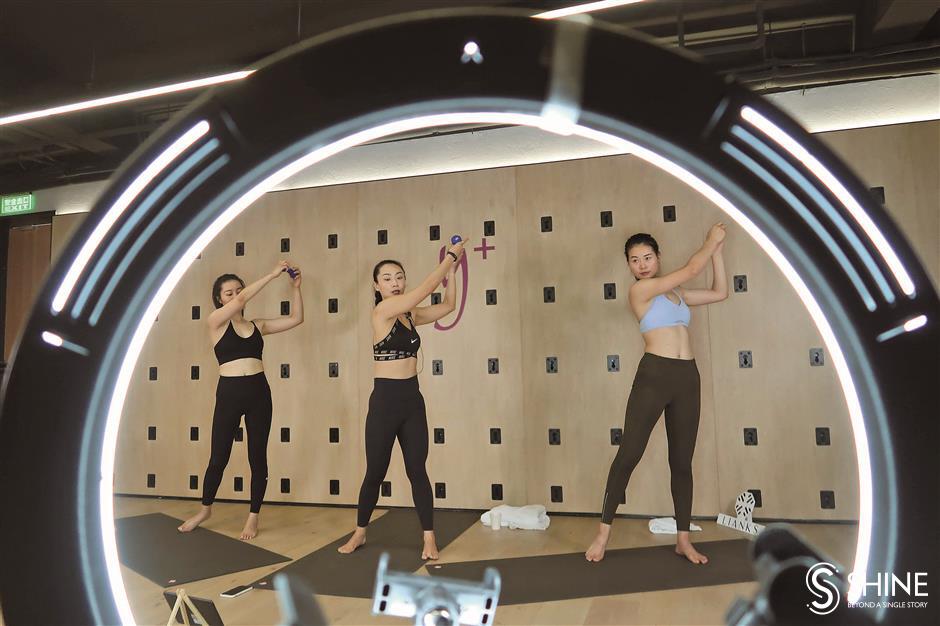 After laying out her yoga mat, and placing foam rollers and myofascial massage balls alongside, Shanghai office worker Rachel Ren opens an app on her iPad and begins her daily yoga session via remote practice with her teacher.

Ren practiced yoga every day at Y+ Yoga Center for one and a half years before the COVID-19 outbreak forced gyms to close. She is now one of the millions across the country who have been working out at home using social media, and reshaping the fitness business ecosystem.

The “new normal” in the post-epidemic period is the emergence of the so-called OMO (online merges offline) services that can meet individualized, tailored and private needs of consumers even though there are skeptics who aren’t convinced by the shift.

“Workouts that only involve individuals, with light-weight equipment, that are convenient to do at home are suited online,” according to Dr Zhang Yehan, from the Shanghai University of Sport’s School of Economics and Management. “High participation, high social interaction and high interactivity training will continue offline.”

“The OMO model of service will become the new normal or mainstream.”

While some gyms and instructors are less enthusiastic about the shift online, Ren is a convert.

“At first, workout alone at home was challenging as I tended to be slack, but I gradually adapted to it,” she said.

Although classes have started again at the yoga center, she is mixing up actual and online lessons.

“Online classes also don’t have a number limit,” Ren said. “The classes can be played back which means I can take classes anytime and anywhere,” Ren said.

Ren said she would also like smaller and personalized livestreamed classes for real- time feedback, rather than just through the comments section. 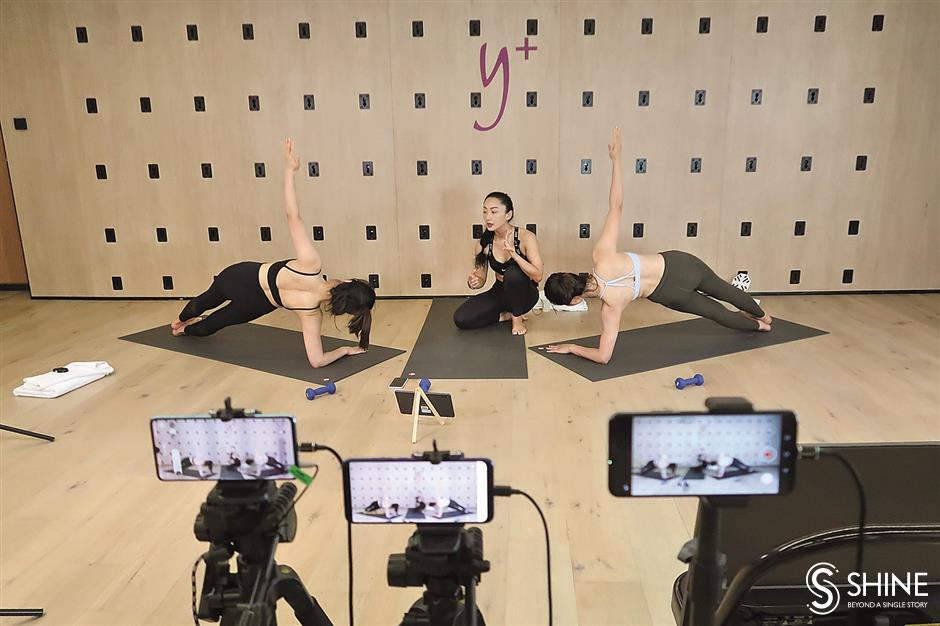 Her trainer Vanessa Shen is also adjusting to the new normal. She told Shanghai Daily that the company was forced to adapt and start online courses in the wake of the epidemic.

“Actually, the center began mulling online courses before the outbreak, but many teachers didn’t have the motivation and interest,” the 38-year-old said.

“We were mobilized to move online. A new team focusing on online tutoring was set up. It’s like crossing the river by feeling the stones. At first, we streamed free classes on apps such as Douyin (TikTok) and Yizhibo in February. Then we launched paid classes on Renrenjiang app. In April, all classes were moved to our self-developed live classroom app Lianks.

“It is quite challenging for yoga trainers, because yoga is different from other physical exercises in gyms. You may go to gyms to attain short-term goals like losing 10kg, but yoga practitioners normally don’t have such specific targets. They have long-term habits which generally require the teacher and students to be in one space and at the same pace. Students need the trainer to be in front of them, listening to his or her voice and feel his or her energy.

“For instance, in one old traditional Indian type of yoga, the teacher observes students practicing the same set of poses without any verbal cues and helps them make corrections when needed. How could this kind of class become digital?”

Shen has developed 30-minute courses for online tutoring, each with a clear and specific goal such as fat burning and waist slimming.

“Our regular offline courses last about an hour, but I find it hard for home exercisers not to be distracted by messages popping up on their phones,” she said.

“It is attractive to price-sensitive customers,” Shen said.

Jing’an District government is promoting in-home fitness through classes accessible on mobile phones. The government’s sports bureau has provided training classes at reduced prices since the outbreak for residents, workers and students in the district.

The bureau said it will continue the subsidized scheme, encouraging more fitness firms and facilities to join its stay-at-home fitness platform to offer more quality and diversified classes.

However, not everyone in the fitness industry whose core business went online during the epidemic, wants to continue classes via social media. 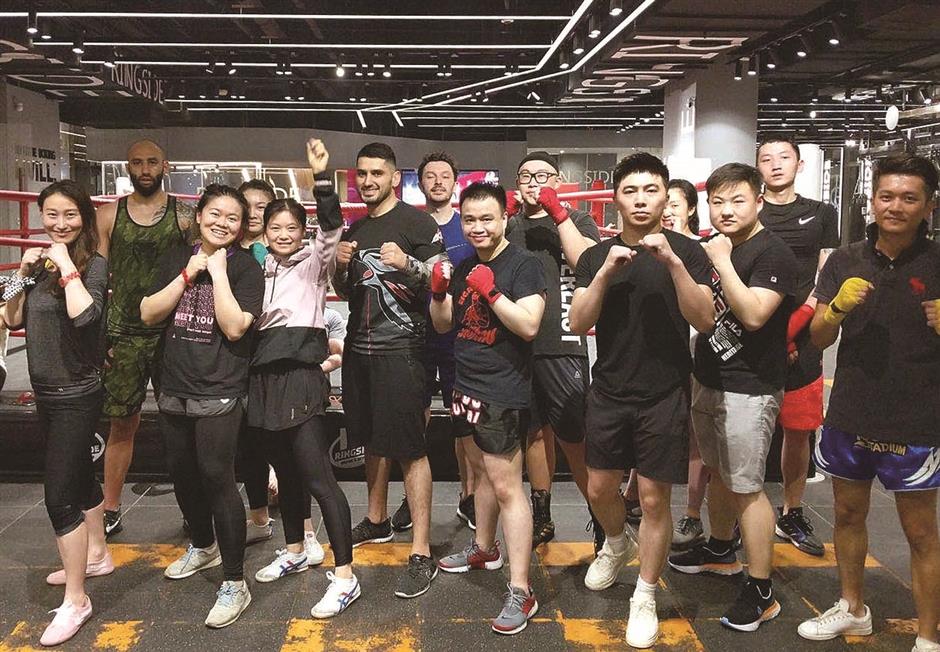 Ringside Boxing & Beyond members are keen to get back in the ring after the lockdown.

For Ringside Boxing & Beyond, a Shanghai boxing club and wellness concept, livestreaming sessions were just a stopgap measure.

“The first step for us was to switch to online classes entirely,” Valentina Palikshanova, senior manager of Ringside, told Shanghai Daily. “Every day we livestreamed four different classes led by Ringside coaches on WeChat and Douyin platforms. We already had 30,000-plus followers on our Ringside Boxing Douyin account so obviously the live sessions were quite successful.”

Palikshanova said they have stopped all livestreaming courses post-epidemic despite the short-term online success, insisting real experience in the gym is necessary for success.

“Doing sports online doesn’t seem very reassuring in terms of human nature,” Palikshanova said. “It’s always easier to do sports in the facilities which were made for them, filled with the spirit to succeed, without excuses, to make yourself stronger and healthier.

“The part of socializing was missed as well as we are creating a quite strong community. People used to stay after classes in Ringside and had a meal together in our bistro to interact more.”

“We are focusing on expanding space-wise, opening new locations … Our main target is to build a community of people dedicated to sports and live a healthy life while also having fun.”

Palikshanova said people are starting to take more care of their health in the wake of the pandemic. 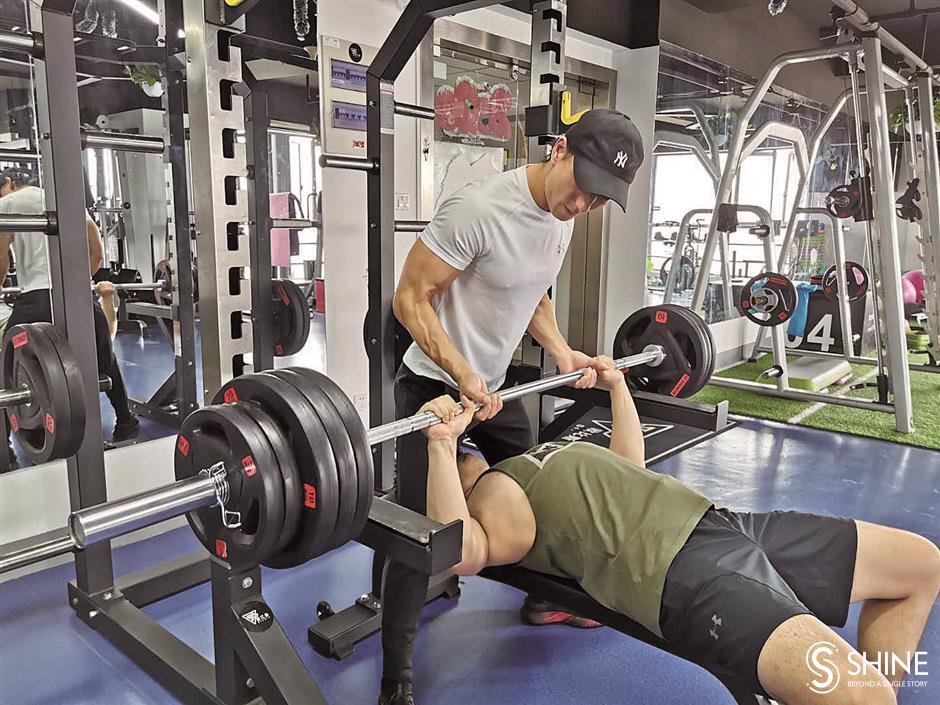 Zheng Yi, the owner and only trainer of O’s Studio in the city, said he didn’t stream classes.

“Those apps don’t watch your every action, and can’t give you tailored and proper instructions. It may lead to injury,” he warned.

He pointed out many people are dependent on personal trainers because their encouragement can get them through tough workouts and keep them motivated.

He is optimistic the fitness industry will rebound.

“Epidemiologist Zhong Nanshan, who became a household name fighting the coronavirus, has said sport should become an essential part of life, like eating and sleeping,” he said. “The importance of health and exercise has taken root in ordinary people, so I’m sure they will embrace more opportunities.”

Dr Zhang also thinks the epidemic had accelerated the move to digital sports and smart sports.

“Companies or service providers which were quick to respond to the changes and spend more on R&D have got ahead of the curve by tapping into new consumer trends,” she said, citing local firm Yue Dong Smart Jump Rope as an example.

Statistics by Alibaba recorded a 255 percent surge in jump ropes between February 11 and March 11 sold by Yue Dong.

Finally, yoga teacher Shen sees the transition online as a good turning point in her career.

“I find online teaching is interesting, for it brings me new challenges,” she said.

With around 30 paying students in each online class, she is thinking hard about how to expand. “I wish I could be a wanghong (Internet celebrity) someday,” she joked.

Who knows, she could possibly even be another Li Jiaqi (a Taobao selling livestreamer and probably China’s most famous social media influencer who always creates sales records)?