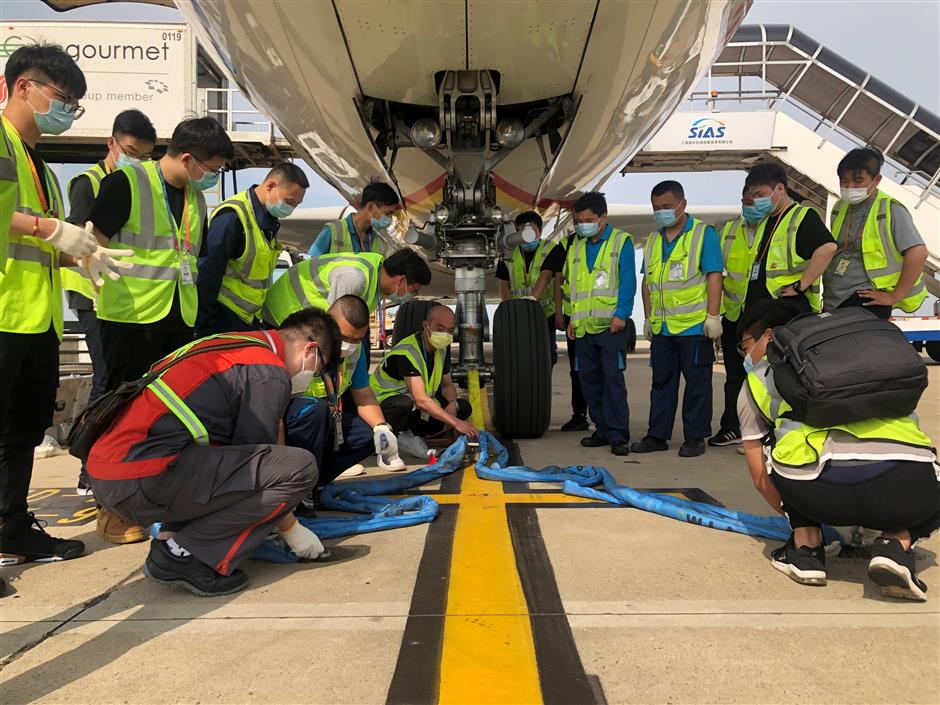 Engineers at Pudong airport fix an Airbus 330 passenger aircraft to the runway to test its stability during typhoons.

Shanghai’s two major airports are preparing for the annual flood season as well as the resumption of normal flight operations.

Measures have been taken at Pudong and Hongqiao international airports to cope with thunderstorms as well as possible flight delays.

And as COVID-19 wanes in China and confidence in travel returns, airlines are deploying additional domestic flights at both airports, the Shanghai Airport Authority said.

At Hongqiao Airport, the number of domestic flights is at 90 percent of normal capacity, and the number of passengers has rebounded to 70 percent.

Pudong Airport has also seen a rapid rebound in domestic flights and travelers, reaching about half of the capacity previously.

Flights and passenger turnover at Hongqiao Airport is expected to return to normal by the end of June, the airport authority said. By then, about 700 flights will take off and land every day along with nearly 100,000 daily passengers.

To ensure smooth operations during the city's ongoing flood season, both airports have upgraded their flood-prevention command platforms, which gather and analyze the data collected by sensors installed to monitor the amount of rain and water levels in runways and creeks.

A remote conference system has also been created amid the novel coronavirus pandemic.

Both airports have also cleared pipes, stabilized outdoor facilities and asked businesses inside the terminal buildings to stay open late in case of flight delays.

More than 38 kilometers of sewerage and rainwater pipes at Hongqiao airport, which are at risk during flooding, have been cleared. 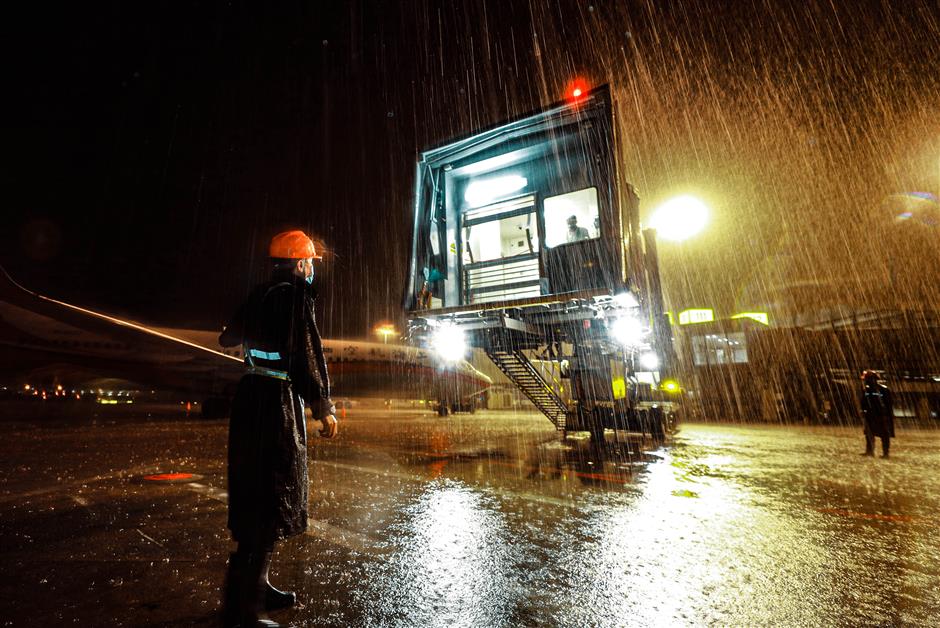 Airport staff operate a boarding bridge amid heavy rain over the weekend.

Waterways around the airport have also been lowered to ensure any accumulated water on runways can be drained off.

Hongqiao and Pudong airports have deployed dredging machines to ensure ditches are clear.

Pumps and other flood-prevention measures have been readied at aircraft maintenance fields and taxi parking areas at both airports. Rooftop facilities, hanging signs, curtain-wall glasses, advertisement boards and nucleic acid detection sites have been stabilized. Airlines have been asked to ensure safe berths for aircraft during typhoons.

In a major exercise, an Airbus 330 wide-body aircraft was dispatched to Pudong airport to test fixture devices. An emergency flood-control team of more 1,000 members took part in the drill.

Temporary resting areas can be set up inside the buildings while the city’s traffic authority will help carriers transport stranded passengers to nearby hotels. Ventilation will be enhanced at rest sites.

Flight information will be published on the airport authority’s social network platforms and official website at www.shanghaiairport.com. Passengers are also advised to check with airlines about flight information before making the trip to the airport, the authority said.

The flood season often comes along with city's plum rain season, called meiyu in Chinese, which began on June 9 this year and will last until early or mid-July.

The season — so called because it is when plums ripen — is characterized by extreme dampness and high temperatures.

Flight punctuality rates at both airports usually slump during the flood season due to the frequent rainstorms and typhoons that reduce visibility for pilots and make it difficult or near impossible for aircraft to take off or land. 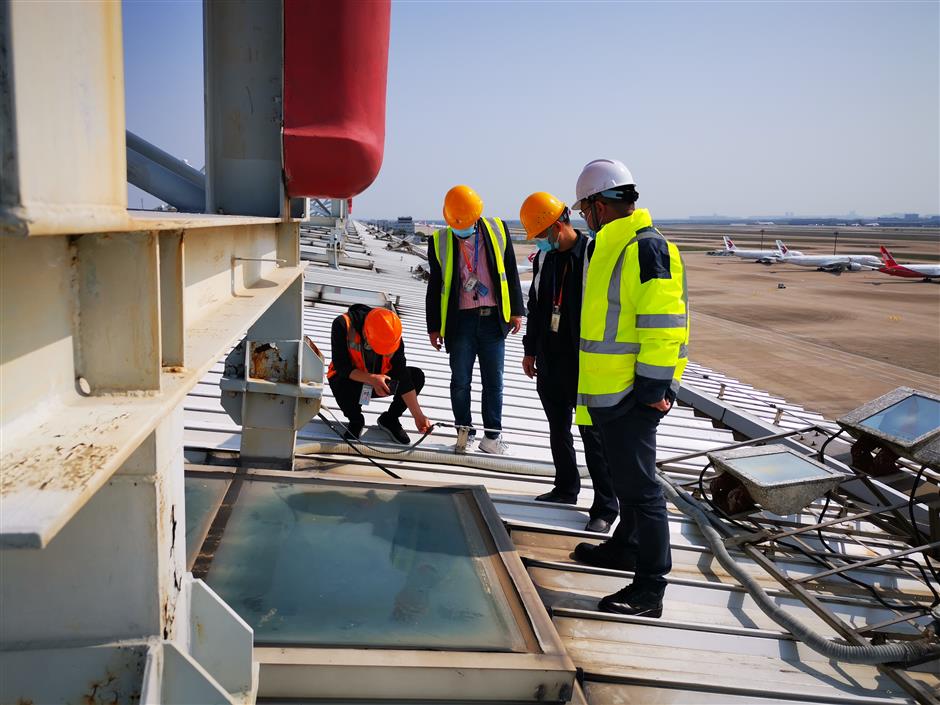 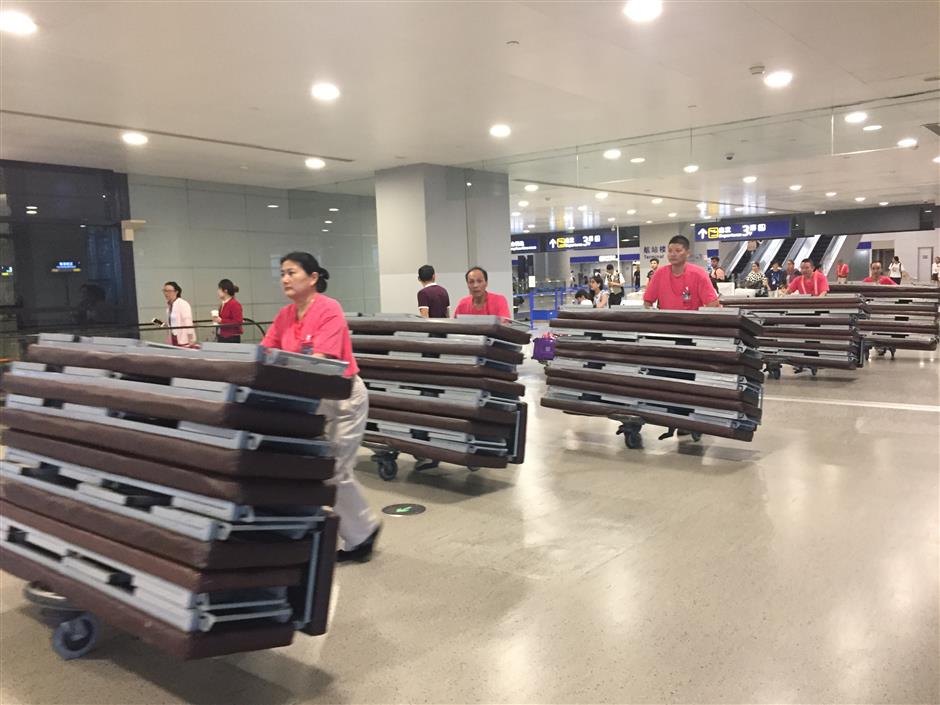