Plenty of sights in museum storehouses for hero medical workers 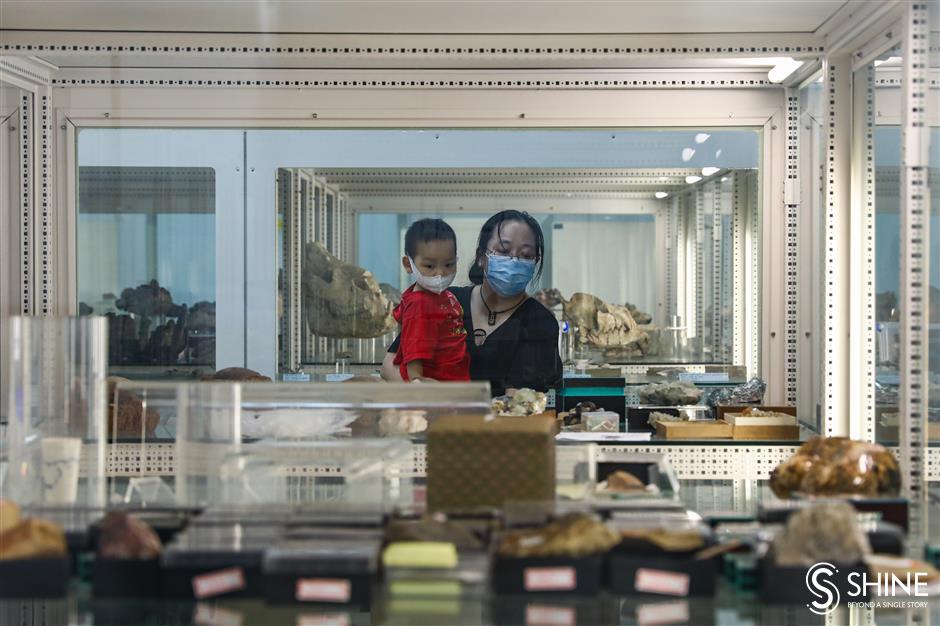 A mother and son visit the storehouse of the Shanghai Science and Technology Museum. 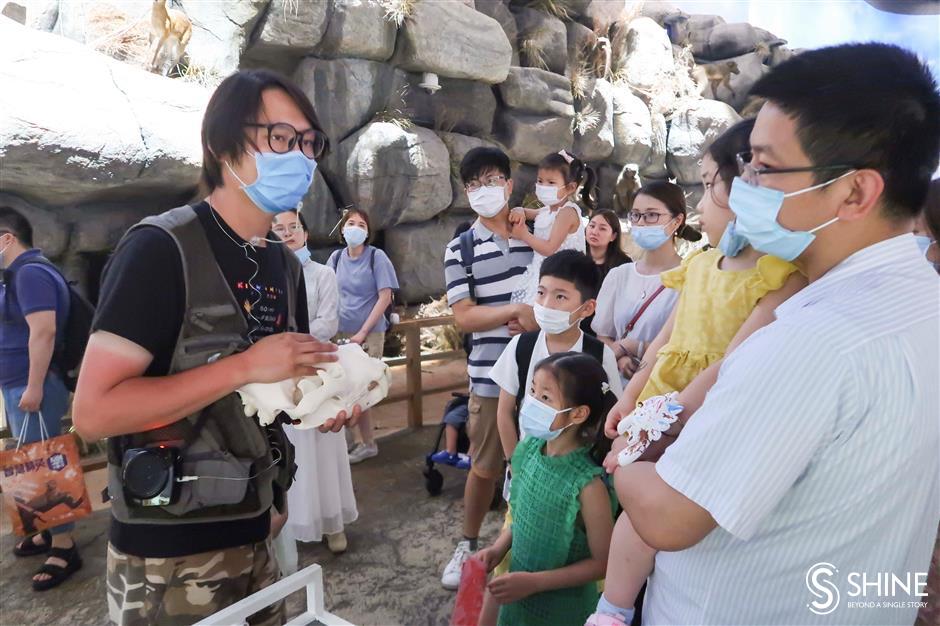 The Shanghai Science and Technology Museum invited the city’s medical workers and their families to visit the storage areas during a special night tour on Friday.

The storehouse, covering more than 3,200 square meters in the basement, has more than 100,000 fossils and specimen of insects, birds, fishes, mammals, amphibians and reptiles. It's also where experts restore fossils.

“For the public, the storehouse is the most hidden and mysterious area of the museum,” said Zhang Yunfei, deputy director of the natural history research center of the museum. “We wanted to show what we have to pay tribute to medical workers in the fight against the coronavirus.”

Forty people were lucky enough to explore the hidden gems of the museum.

One room, which has a constant temperature of 18 degrees, stores some 27,000 samples of insect and mite specimens. A paleontological collection, stored at 20 degrees, includes fossilized dinosaur eggs and marine invertebrates from hundreds of millions of years ago.

The museum has precious examples of insects and birds collected by foreign missionaries about a century ago, which allow today’s researchers to learn about the past ecological environment of Shanghai.

“This specimen of bird collect in Xujiahui area in 1918, proves that today’s bustling commercial hub used to be a rural wetland,” Zhang said.

Gu Haiyan, nurse from the Tongji Hospital who had worked in Wuhan for 55 days during the pandemic, said: “It just opened a new world to me."

“For the first time, I have the chance to see so many beautiful specimens that I used to only learn from books," she said. "The tour raises my interest to learn more about animals."

Besides the special tour, the museum also organized pop-up events such as interactive play with a robot dog, VR-embedded exhibitions and DIY workshops. 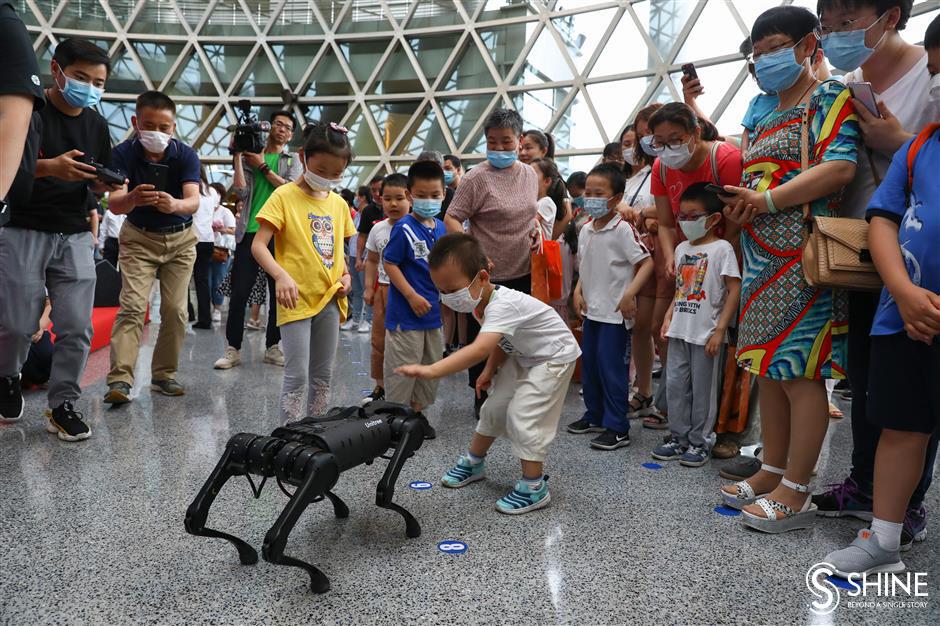 A boy plays with a robot dog at the Shanghai Science and Technology Museum.

“I’m so looking forward to visiting the whale exhibition," said 14-year-old Lu Siqi. "I plan to have an in-depth tour. I’ve been to the museum several time when I was in primary school, but I didn’t know much about science and technology. Now, I have better understanding."

It was her first time out with her parents since her mother Yu Qing, a doctor from Zhongshan Hospital who had worked more than 50 days in Wuhan, returned Shanghai on April 1.

“Now, I cherish every moment with my family. Such family outing used to be so common, but now I think it’s very precious,” Yu said. “I just want to return to normal life.”

The Shanghai Natural History Museum took medical workers and their families on a night tour on Saturday. As well as opening its storehouse, it also designed a variety of activities to combine science and art to celebrate Cultural and Natural Heritage Day.

A stall run by Hua Xingfu, a 73-year-old practitioner of paper art craft, was popular. He showed children how to tear paper to make owls.

“I’ve been preparing for it for about half a month, and finally I decided to teach them to make owls because owls eat pests and medical workers treat diseases,” he said.

“Before scissors were invented, it was common for people to tear paper to make different patterns,” he said.

More than 2,000 people were invited to take part in the night tours over two days. 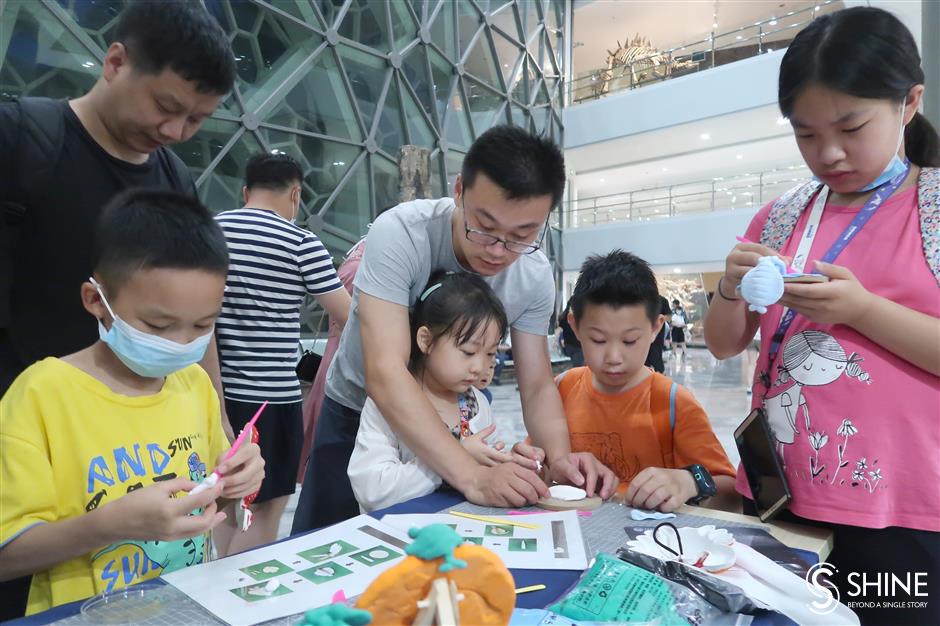