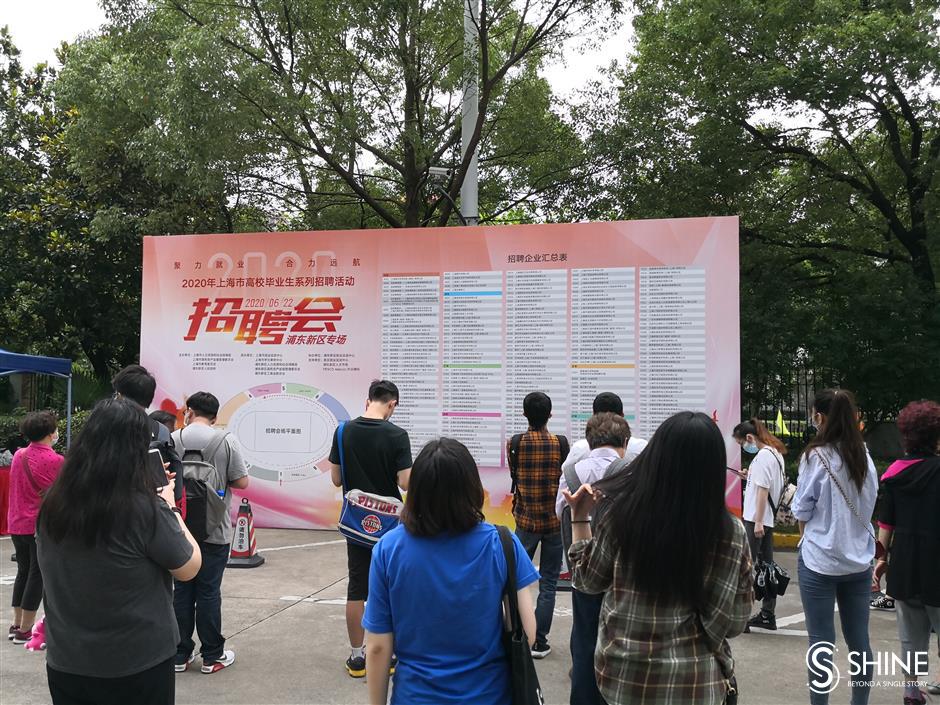 Jobseekers check out information on a board at the job fair in the Pudong New Area on Monday.

The Pudong New Area held the largest job fair for graduates since the COVID-19 outbreak, with 230 employers offering more than 3,600 jobs on Monday.

The employers, including Huawei, Shanghai Disney Resort and Freshhippo, were involved in sectors ranging from Internet technology and artificial intelligence to biomedicine and finance.

The fair attracted 2,272 jobseekers who submitted 5,626 resumes and received 711 offers. They also made 145 inquiries about policies related to employment and entrepreneurship.

The fair was also accessible online with 1,819 resumes submitted.

A long line formed in front of the Disney booth after the fair kicked off at 1pm on Monday.

“I have been submitting resumes and taking part in interviews online,” said Wang Xiuzhi, an undergraduate majoring in German at Shanghai Dianji University. “Some employers have given out offers but some just showed no response. I haven’t made up my mind to take which job and am looking for better opportunities. Shanghai Disneyland is near my home and it seems a happy place to work. So I would like to try my luck with it.”

Wang said the offline fair was a chance to talk to HR staff face to face. 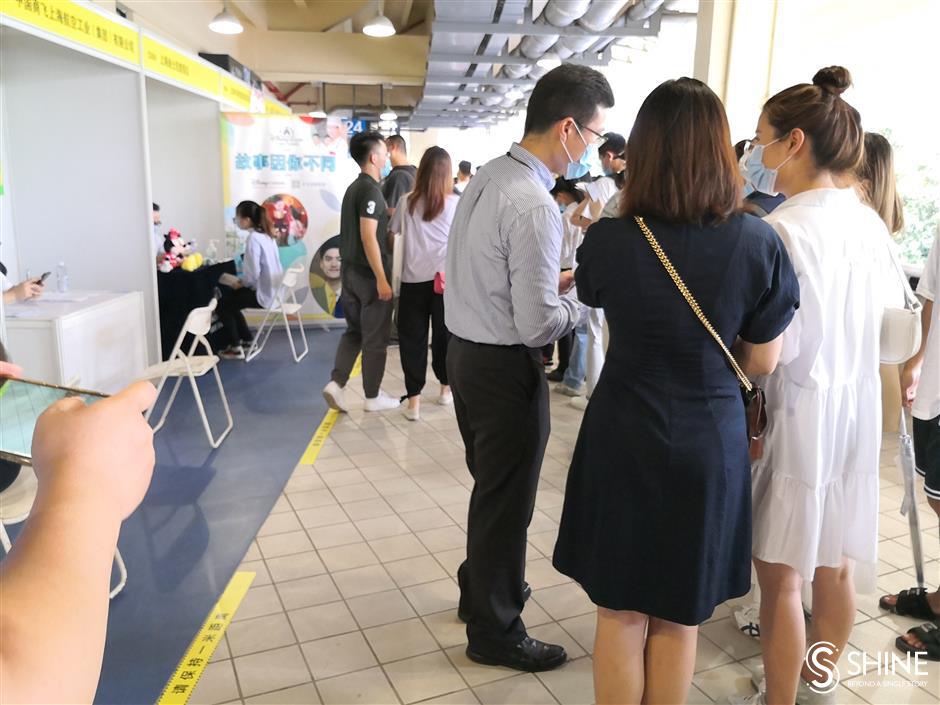 Jobseekers line up in front of the Shanghai Disney Resort booth.

One Shanghai Normal University student, who was at the fair with a friend, said: “We have tried to find jobs online and taken several video interviews as well. However, both of us prefer offline recruitment, so as soon as we heard that this job fair would be held today, we made an appointment to come here together.”

She took information sheets from several employers and was filling out a form about her personal information and career interests to help employment promotion officials provide a more accurate service for her. 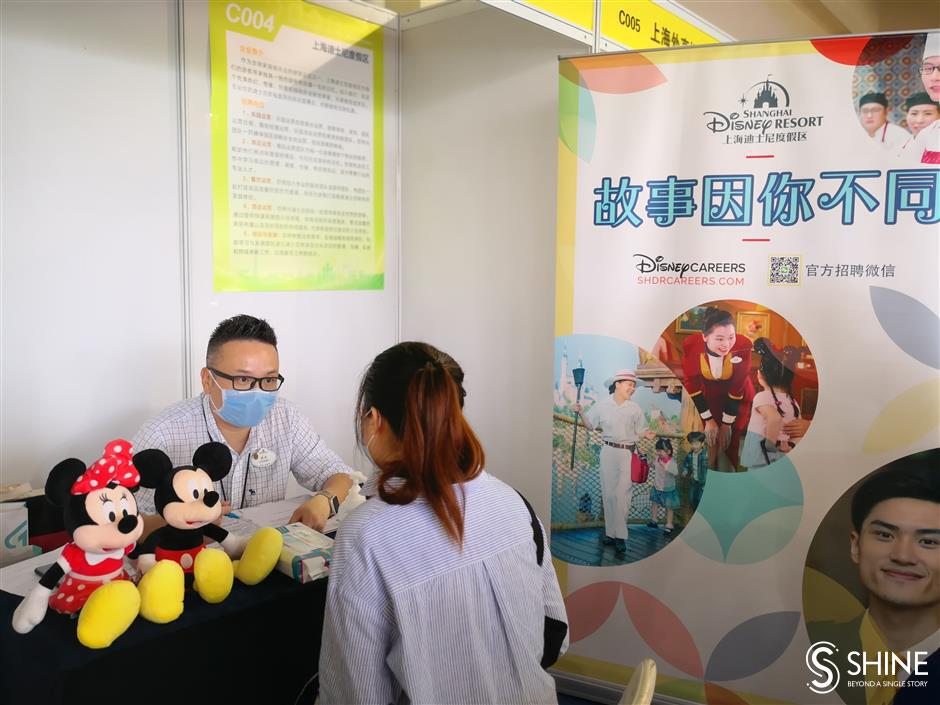 A jobseeker talks to a staff member from Shanghai Disney Resort.

A student surnamed Song said his overseas study plans had been disrupted by the pandemic and he was treating the fair as an opportunity to learn about the job market.

“I had planned to have my further study abroad in the second half of this year, but the novel coronavirus messed up my plans and I can’t go now,” he said. “People around me suggested that I could find a job first and make further plans later. It seems that each plan, either looking for a job or studying abroad, requires more efforts. My preparation for finding jobs is late and there are still a lot of things I don’t know.” 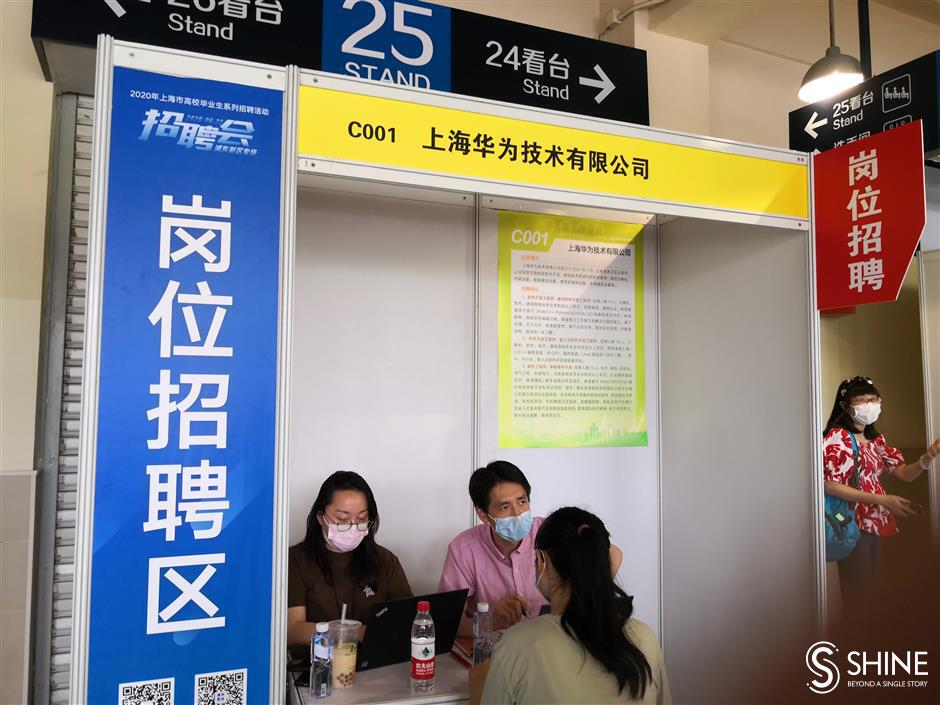 A jobseeker talks with human resources staff from Huawei.

Xu Manhong, director of Pudong’s employment promotion center, said an investigation into about 12,000 graduates who are local residents found that only 45 percent had found jobs while about 14 percent said they needed help from the government. About 500 said they would wait until the pandemic was over before looking for jobs.

Xu said that no matter when students would like to start looking for jobs, they would continue to provide information and help for graduates. She said the area had organized about 80 fairs both online and offline in the past few months at different levels and will organize another 183 in the rest of the year. 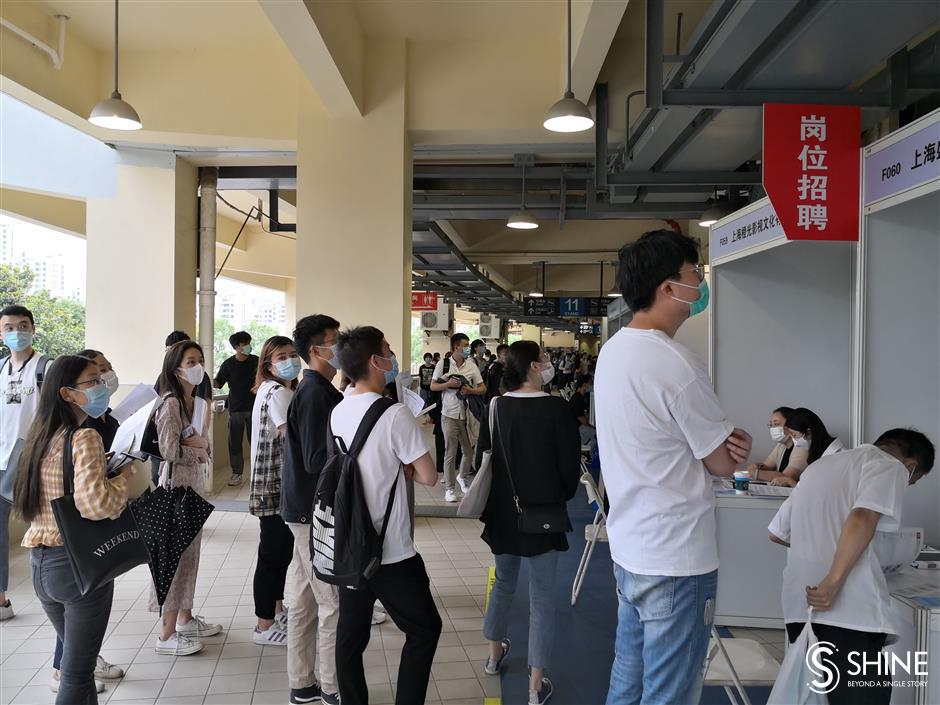 The fair attracted more than 2,000 jobseekers.

Zhou Guoliang, director of Shanghai Employment Promotion Center, said: “The influence of the COVID-19 pandemic has postponed the speed of job seeking of this year’s college graduates, so the employment rate for this special group is relatively low at present.

“But we have been cooperating with other government departments, such as the education commission, to help connect them with employers and explore more jobs for them, so the number is climbing up quickly recently. We restarted organizing offline job fairs in late May and we will organize more, bigger job fairs over the following months, and I believe that by September the employment rate among college graduates will be the same as last year.”