We did it! Trash sorting, one year on, is proving successful

The regulations on garbage sorting that came into effect on July 1 last year in Shanghai have brought changes and challenges to both residents and authorities, but we’ve made them work in the past year with input from the government, residents, volunteers, communities, businesses, researchers and inventors. Shanghai Daily visited some of them recently to see how they have helped turn trash sorting into second nature and make Shanghai a better city. 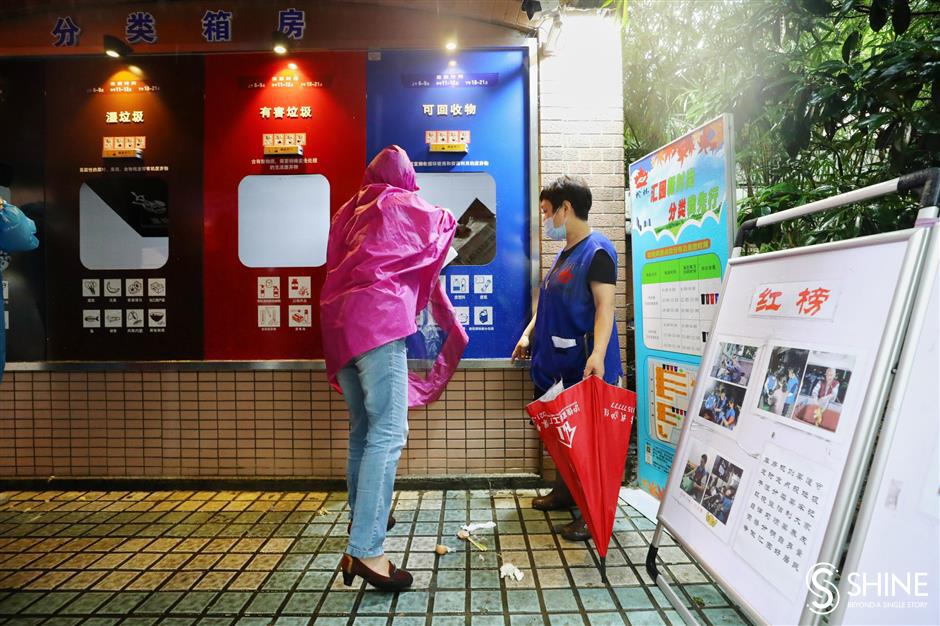 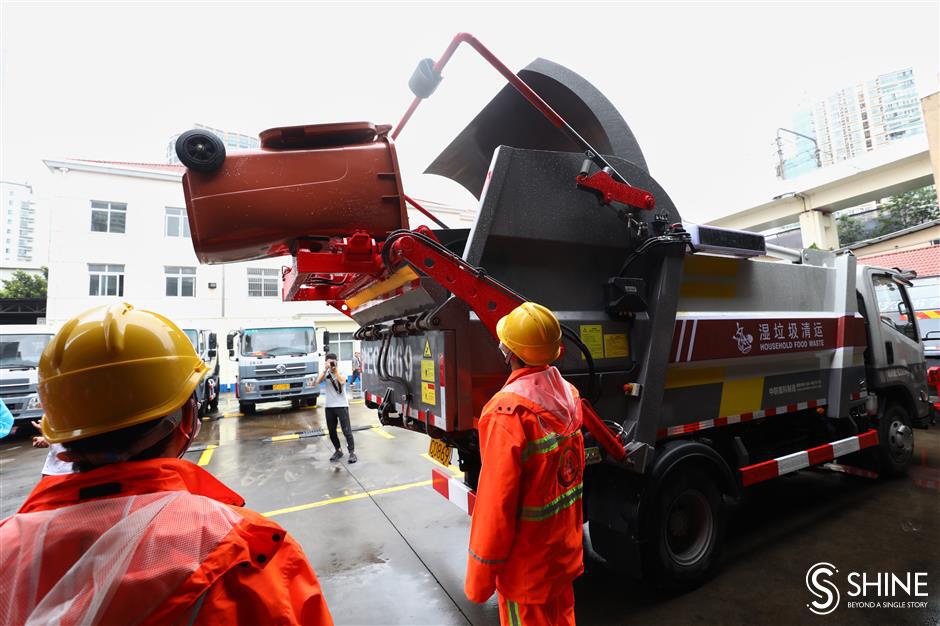 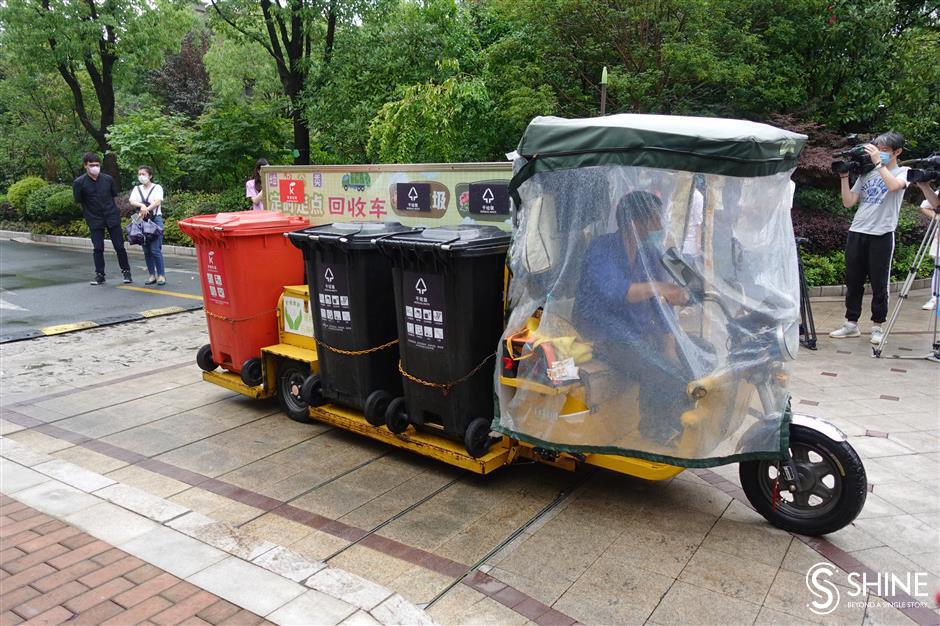 A year ago, Shanghai’s strict new garbage-sorting rules came into effect, entrenching themselves into the daily routines of residents, reducing waste-treatment overload and making the city more environmentally friendly.

The effort has involved the teamwork of government, residents, businesses, new technologies and local creative thinking.

The accuracy rate of garbage sorting by residents has reached over 95 percent, and a team of 30,000 volunteers involved in trash sorting has been established, the Shanghai Greenery and Public Sanitation Bureau said.

"The city has witnessed significant progress in garbage sorting over the past year, and a higher standard of science and technology will be introduced into the process in the next phase," said Deng Jianping, director of the bureau.

When the new regulations went into effect in July 2019, an estimated 15 percent of waste was being recycled or separated into categories for more efficient disposal. By the end of the year, some 90 percent of 13,000 residential communities and villages across Shanghai and 90 percent work units in the city were adhering to the new standards.

Why sorting trash in the first place? Well, some waste can be recycled instead of being dumped at already overburdened waste-treatment facilities. Wet kitchen waste, for example, can be turned into fertilizer or power generation. Old clothing can be used in a variety of industrial uses. And hazardous waste, like batteries and electronic gear, can’t just be dumped in landfills.

Despite the novel coronavirus epidemic and lockdown of residential complexes, trash sorting has been moving ahead without hitches, the bureau said.

Between June 1 and 15, 6,814 tons of recyclable waste were sorted every day, up 71 percent from the same period last year. In the same time frame, the volume of wet garbage rose 39 percent to 9,632 tons, and 3.3 tons of hazardous trash were collected.

As a result, 15,518 tons of dry trash bound for landfills or incinerators were collected every day, a drop of 20 percent, the bureau said.

The city’s target is for more than 6,000 tons of recyclable waste and about 9,000 tons of wet garbage to be sorted every day this year. That would bring the daily average of dry garbage down to below 16,800 tons from 17,731 tons last year.

Meanwhile, treatment facilities are being improved.

Some 21,000 disposal sites have been upgraded, and the city has a fleet of nearly 5,000 vehicles to collect and transport wet, dry, recyclable and hazardous waste. 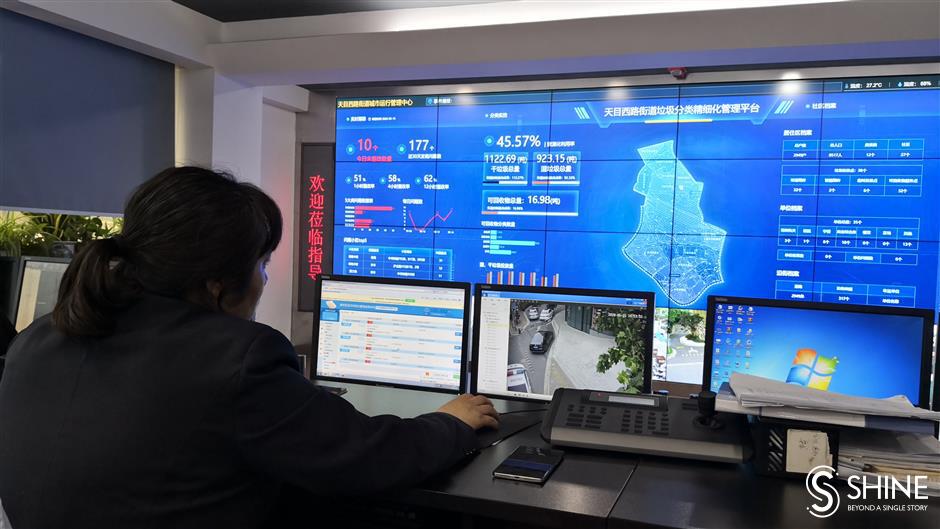 A software tool called Tianmu Elantong can alert neighborhood committee officials on the times and location of garbage-sorting problems and send photos related to the problems to them.

Technology plays a key role in administering such a large system. For one thing, it helps neighborhood officials run smooth operations at the grassroots.

Zhu opened a software tool called Tianmu Elantong on her cellphone. Locations and photos related to the problems popped up immediately.

"The garbage bins at the No. 1 disposal spot have spilled over," Zhu noted.

She directed property management staff to the site immediately and told cleaners to empty and clear the bins.

"More than 10 bins at the disposal spot were out waiting for collection, and the garbage inside the remaining bins almost full,” Zhu said. “Some residents didn’t notice and dropped waste into the full bins, causing the spillage.”

The problem was fixed within half an hour.

Meanwhile, on a huge display screen at the urban operation management center of the Tianmu Road W. Subdistrict in Jing'an, a blue "heart" is divided into 13 sections, with 27 red dots representing different residential communities.

When the monitors click on the dots, garbage-sorting files display recent inspection results and any problems captured by surveillance cameras.

The information is sent to neighborhood committee officials and property managers simultaneously. Problems must be addressed immediately.

"Once problems are spotted, we receive text messages,” Zhu said. “Once the system flags a problem, we have a specified amount of time to correct it.”

There are three garbage-disposal spots inside the Fangualong residential community, and each bears a QR code.

"The code is very practical," said Zhu. "In the past, we were informed of problems only when inspectors raised them. But we lacked details, such as times and specific bins. Now everything is clear.” 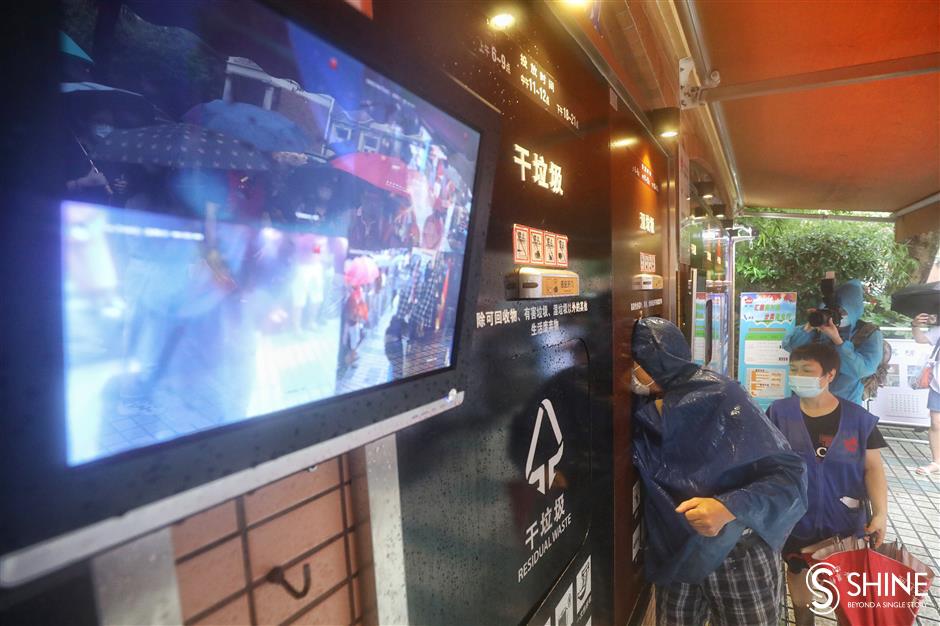 In the Anfeng residential complex in Jing’an, technology is also assisting trash sorting.

"Based on data, we know accurately the disposal times of frequent violators and can adjust our monitoring of the sites,” said Wu Jiaguo, property manager of the complex.

In Xujiahui Subdistrict of Xuhui District, an intelligent measurement system has been introduced for wet trash collection and garbage trucks. Information from each collection site and the weight of garbage collected is recorded in real time. That allows Shanghai Rixu Environment & Cleaning Service Co, which transports the trash, to be more efficient in collection.

Garbage collectors upload photos to the app if they find businesses that have failed to sort out trash properly. The information is then sent to local authorities.

"If garbage-sorting failures are spotted three consecutive times, the app will display red lights, and we will refuse to collect the trash from the businesses until they correct the problem, " said He Jun, a trash collector with the company.

The company's garbage trucks have had larger tanks installed to prevent leakage during collection and transport. 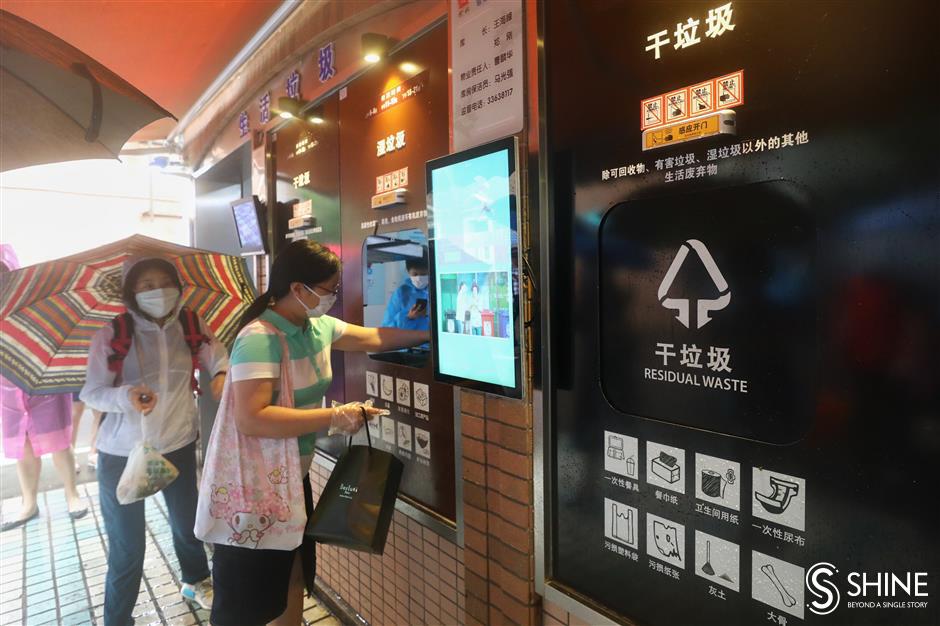 Grassroots creative thinking goes hand-in-hand with technology in devising the most effective systems for handling trash.

“We don't have any trash bins in our neighborhood now," said Zhou Wenlong, Party secretary of the Moli Mingdu residential complex in Minhang District. "Instead, there is a trash bin 'shuttle bus' every day, which waits 15 minutes at each assigned site for residents to dispose of their garbage.

"We have tried to meet all the residents' requirements in choosing four pickup sites and we ensure that every resident can dump trash within four minutes,” he added.

At the Xujiahui Garden residential complex, where 40 percent of 1,208 households are renters and a large number of senior citizens reside, volunteers have been recruited to make trash sorting as easy and pleasant as possible.

"Our volunteer team has been expanded to more than 100 people, including some children, who are role models for other residents, " said Zheng.

Garbage-disposal sites in the complex have been equipped with washbasins, rain protection and adequate lighting. The doors at the sites open automatically when residents approach laden with garbage bags.

"The garbage-disposal spots are more pleasant and smart, and trash management is more people-oriented," said Zheng.

Sheng Hong, Party secretary of the Ronghua neighborhood in Changning District, sums up the work in that area: "We are turning garbage sorting into a new habit, a new fashion.”

During the first half of the year, the neighborhood’s garbage-disposal room was disinfected regularly because of the COVID-19 outbreak. And for returning expats who had to go into 14-day quarantine, community staff showed up at their doors to collect trash.

To help expats, the community issued brochures with multilingual texts and pictures to illustrate how to handle the four types of garbage.

"We wanted to make clear garbage classification because sometimes it can be confusing,” Sheng said. "The rate of garbage-sorting accuracy is now above 95 percent.”

Expats in Shanghai have supported the city’s garbage-sorting rules.

"I think it has definitely helped clean up the city's environment and will improve overall nature and the air in China," said a resident who identified himself only as Kirk D. L., a teacher from the US. “These are positive steps in protecting the Earth. We all need to work together to make a better world.”