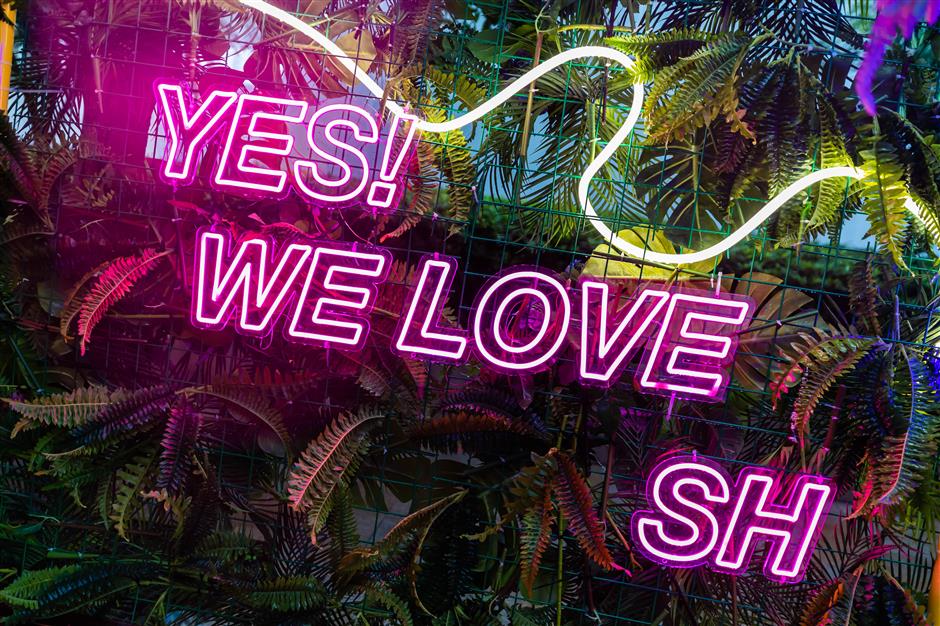 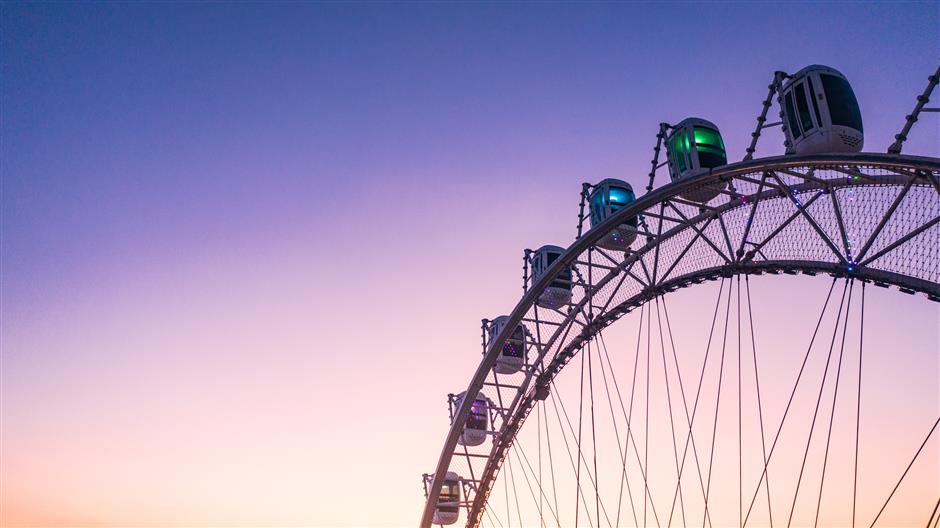 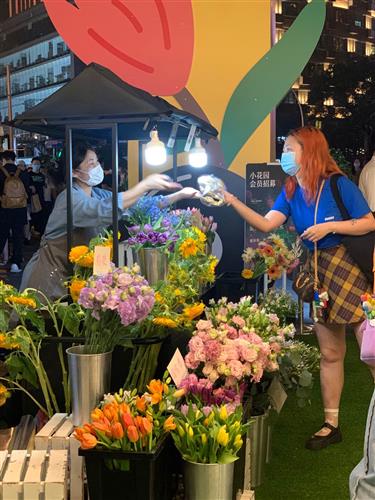 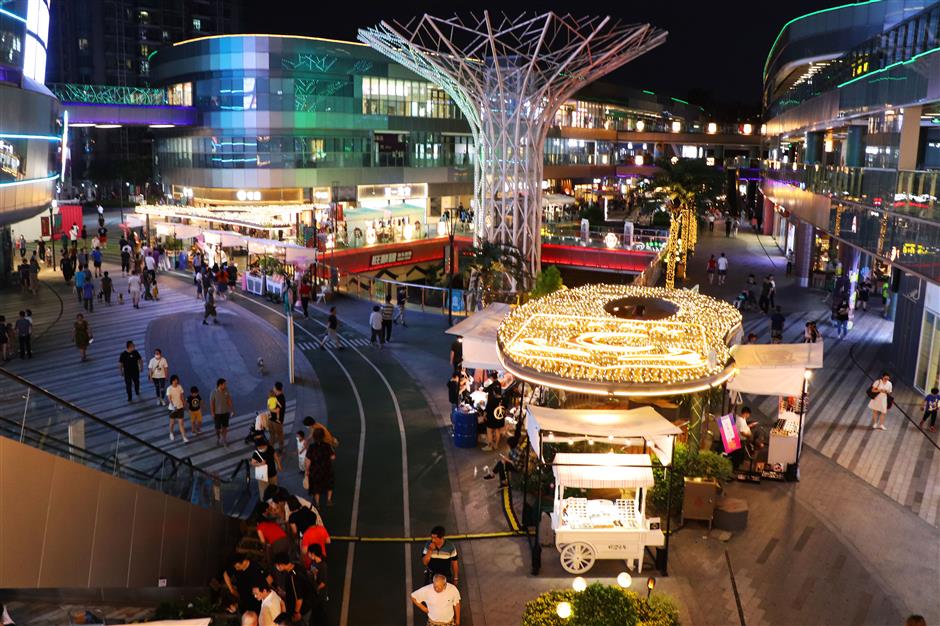 June Keywords: Light up the Sky

Night fairs are back with a vengeance once again in Jing’an District. The shadows of the post-pandemic winter have been cast away and replaced by a shining light, brightening up the city’s summer evening sky, as festivities return to one of Shanghai’s most popular shopping areas after a four-month absence.

Long queues outside Jing’an Kerry Center reappeared to passersby, witnessing eager shoppers line up to explore the charming 264-meter-long Anyi Road street fair. Besides food, drinks and entertainment, immersive activities have been added to the extravaganza, such as interactive games, DIY workshops and photo-taking sites in a neon-lit setting.

Huang Ning from the Kerry Center believes the key to night fair’s success is to offer immersive experiences, create stylish ambience and form a multicultural community.

“More than just a fair, we want to create a place where art, nature and commerce mix, where people can explore trendy things and experience the city’s charms,” said Huang.

“Like Bryant Park in New York and Covent Garden in London, we want our fair to be unique.”

Due to the uncertainty of COVID-19, the fair upgraded measures on June 20.

People are required to measure body temperature, present health QR codes and enter the fair via the six gates of Jing’an Kerry Center, which can greatly avoid crowds in a huddle. And they can leave the fair from Anyi Road’s two ends on Tongren Road and Changde Road.

“I’ve seen long queues about 300 to 400 meters. The new safety measures will make longer queues so we designed a new route to guide people to enter and leave the fair from different entrances and exits,” Huang said.

Outside the HKRI Taikoo Hui mall, skincare boutiques, fragrance stores and designer brands put up stalls to create a “secret garden” for ladies. The Imix Park mall, on the other hand, created a garden party for kids, featuring traditional childhood games, such as goldfish scooping and sugar painting.

Children can also take a Thomas the Tank Engine and Friends’ train around the mall. A wide variety of outdoor activities, including trampoline and karts, are available for active kids.

Gonghexin Road Subdistrict has opened a community night fair at an outdoor parking space outside the Daning International Tea City mall. Tea, of course, is the theme of the night fair.

city, says the parking space is empty on evenings, and the night fair just injects some new blood to it.

“What we want to promote is not only tea but also tea culture. We have designed many interactive activities to bring people closer to tea,” she said.

Joy City shopping mall has also joined the night fair gala. It is famous for its 56-meterin-diameter-by-98-meter-high Sky Ring Ferris Wheel on the eighth floor, which has been called Shanghai’s version of the famous London Eye.

At night neon lights illuminate the sky and live jazz music is performed by the city’s renowned JZ Club in Joy City. What better way to experience a romantic ride on the Sky Ring and enjoy a bird’s-eye view of both sides of Suzhou Creek with a cocktail or beer?

“It’s not a simple decision for a metropolis to open night fairs. Starting last year, authorities began to get more involved in organizing and managing night fairs. We are trying to find the best way to revitalize night fairs without disturbing nearby residents,” said Lin Xiaojue, director of the Jing’an Commerce Commission.

Lin says the nightlife economy is not only about night fairs but also about other venues where people can gather and relax until midnight.

“Nighttime reading venues, running clubs and even museum activities are all part of that economy,” she said. 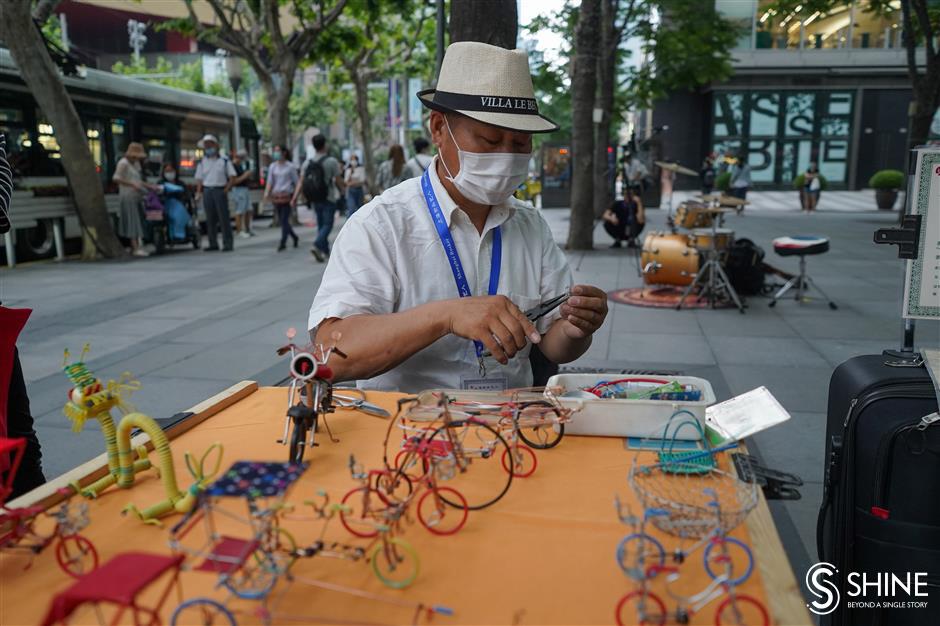 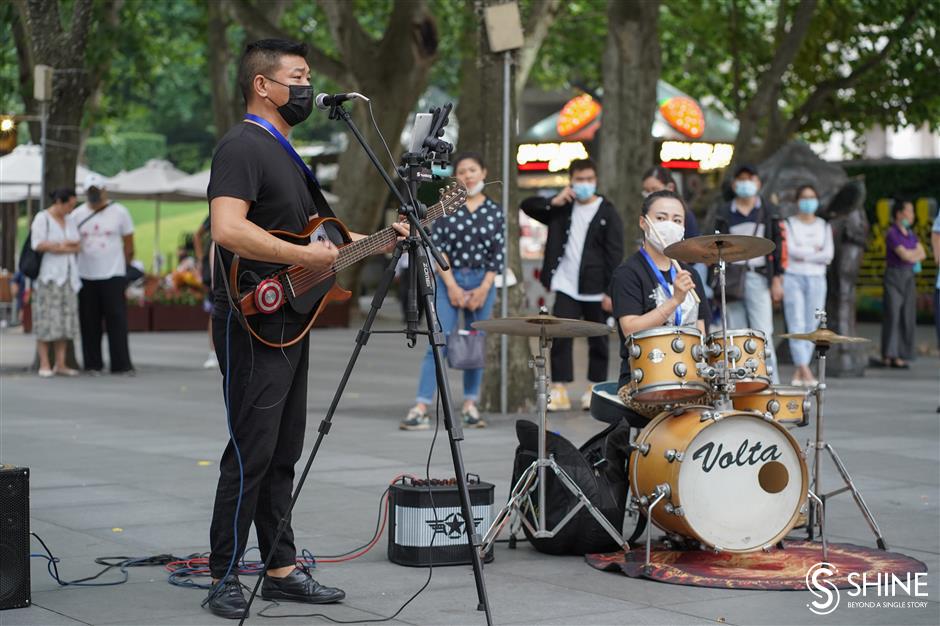 Outside Jing’an Park, comedians, handicraft workers and live bands have put a spring in the step of shoppers as street performers returned to the stage.

One of them, Chen Chaoyou, puts up his stall before it gets dark. He uses recycled electric wires, iron wires and tin cans to make vehicle models, from motorcycles to vintage cars. His stall is popular among youngsters, as an environmentally friendly lifestyle has become a trend following the city’s garbage-sorting drive last year.

Chen came from Anhui Province to Shanghai in early 1990, and in 2015 he obtained a certificate for being a street performer.

“I’ve found my position in this inclusive place which allows us to put up roadside stalls,” he said.

This month, Shanghai Natural History Museum, in Jing’an, has organized a nighttime tour.

Besides a guided tour of its great collections, it has designed a variety of activities to combine science and art to celebrate this month’s Cultural and Natural Heritage Day.

One stall opened by Hua Xingfu, a 73-year-old practitioner of paper art craft, was popular. He showed children how to make owls.

“I’ve been preparing for about half a month. And finally I decided to teach them how to make owls because owls eat pests like medical workers treat diseases,” he said.

Hua is a haipai (Shanghaistyle) paper-tearing inheritor, listed as one of the city’s intangible culture heritage.

“Before scissors were invented, it was common for people to tear papers to make different patterns,” he said.

Paper-cutting isn’t the only art show on view: Crowds of children gathered around students from Shanghai Academy of Fine Arts (Shanghai University) to have their faces painted. And, within minutes, children’s faces resembled swans, peacocks and other fascinating animals much to their joy.