Around The Delta
Shot by Jiang Xiaowei. 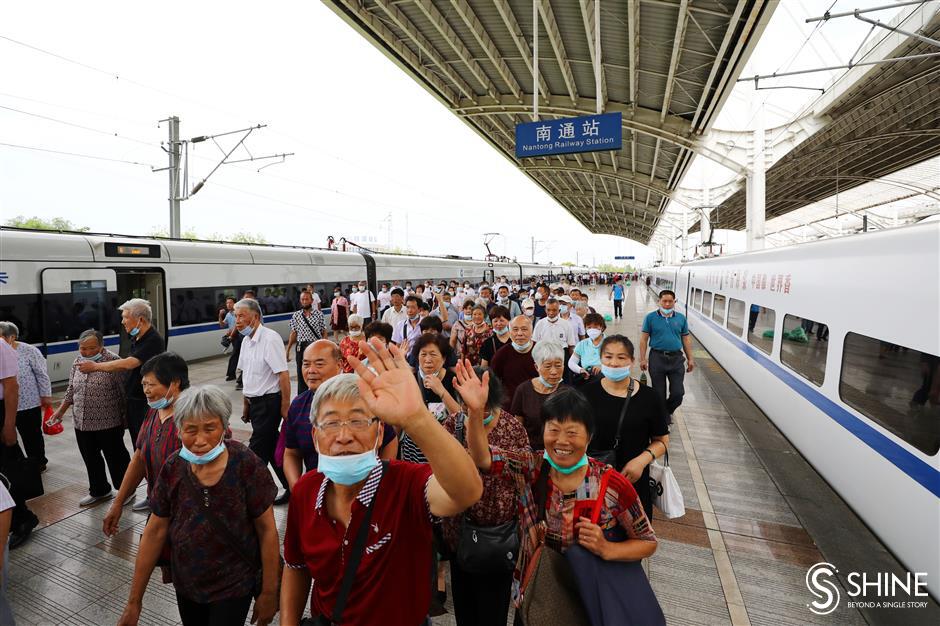 Passengers get off C3836, the first train from Shanghai to Nantong as the Shanghai-Suzhou-Nantong railway goes into operation on Wednesday.

The first train on the Shanghai-Suzhou-Nantong railway departed Shanghai Railway Station at 11:28am on Wednesday.

The railway cuts the travel time between Shanghai and Nantong City in neighboring Jiangsu Province to as little as one hour and six minutes, down from three-and-a-half hours. The train arrived in Nantong on 1:09pm.

Huju Opera and pingtan (storytelling to music in Suzhou dialect) performances were staged on the inaugural trip.

A total of 18 trains were arranged on the railway from Shanghai on Wednesday. By noon, business and economy tickets on five trains had sold out.

Li Juan, a native of Nantong, was excited about the new service. She started working in Shanghai in 2016 but her parents still live in Nantong. Even when driving back home, the trip was not easy.

"It sometimes takes two-and-a-half hours to three hours by car from Shanghai to Nantong on weekends because of traffic congestion on the G15 Expressway," she said. Crew member and passengers take photos in front of C3836.

It took the couple 12 hours to drive from Shanghai to Nantong during the National Day holiday in 2015, Li recalled.

Li still remembers when she started dating with her now husband in 2003 when he was working in Shanghai. The journey between the two cities took six hours by coach and boat.

At that time, the Sutong Yangtze River Highway Bridge was not opened for traffic, and bad weather would suspend the operation of boat service, said Li.

"The two cities are close, but inconvenient traffic cost a lot of time, which even made my parents hesitant about the marriage," she said.

The opening of the Sutong Bridge in 2008 cut the time to one and a half hour, at the fastest, when traffic was light, which eased Li's parents' attitude on the marriage.

Over the years, Li closely followed news on whether a high-speed railway connecting the two cities would be built, and now her dream was fulfilled.

"Traffic congestion is in the past, and I will take my parents on the train to Shanghai," she said with a grin. 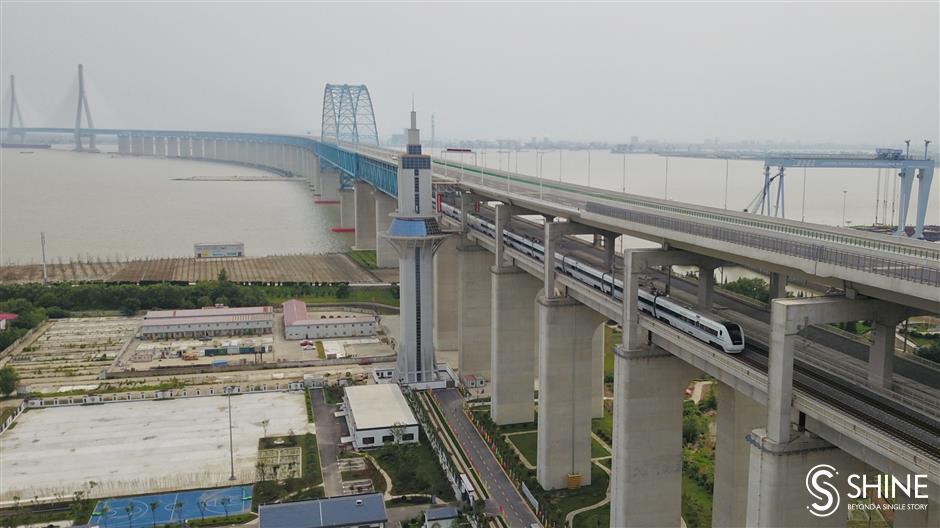 The first phase of  the Shanghai-Suzhou-Nantong railway project is the Zhaodian-Huangdu section, stretching 143 kilometers. It starts in Nantong and ends in Shanghai's Jiading District.

The railway will connect northern Jiangsu and Shandong provinces via the Yancheng-Nantong railway (which is at present under construction), Lianyungang-Yancheng railway, Nanjing-Qidong railway and Xinyi-Changxing railway, and link Zhejiang Province via Shanghai-Kunming high-speed railway, China Railway Shanghai Group said.

Su Changqing, a Yangzhou native, works at Shanghai Railway Station. His grandmother, in her 90s, also lives in Shanghai. She wants to see her hometown, but the four-hour car trip has delayed her plans. 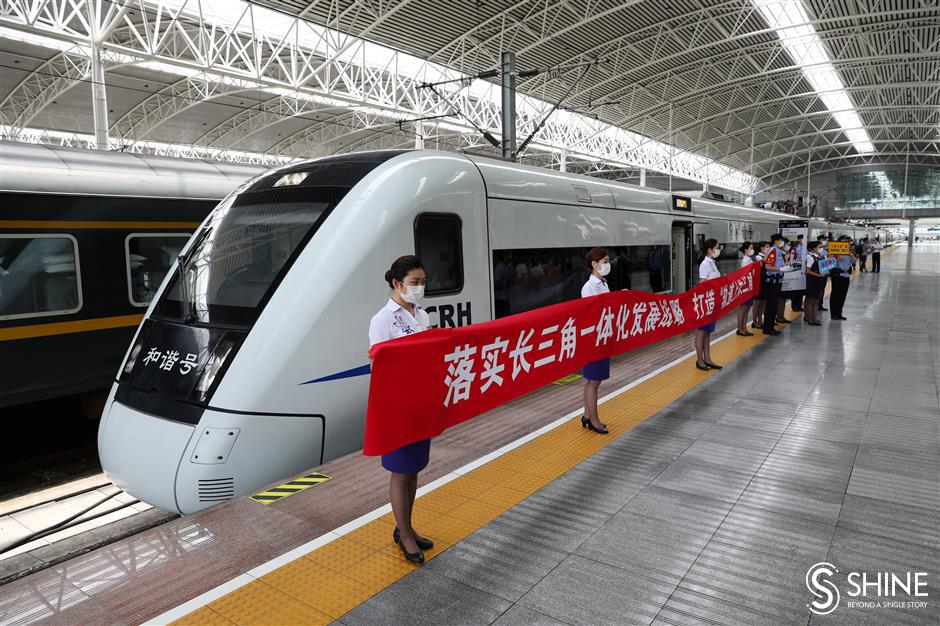 C3836, the first train from Shanghai to Nantong, as the Shanghai-Suzhou-Nantong railway goes into operation on Wednesday.

"We are concerned about the long journey, but she is home-sick as her age grows," said Su.

"The train operation is great news for our family, and I will take my grandma back to Yangzhou soon and experience the beauty on the train," he said.

"I still remember when I took the coach home in my childhood. I needed to leave early, when it was still dark, and arrived in Yangzhou after lunch, which was very inconvenient," he said.

Song Quanzhen, a university teacher in Shanghai who has been working in Nantong for one year, took the train on his latest trip from Shanghai to Nantong with his family.

"I have been driving to work for one year and I will be back to my post in Shanghai this summer. Since the new railway opened to traffic today, I'd like to experience it and take my family there to have a look at my working place and travel around," he said. 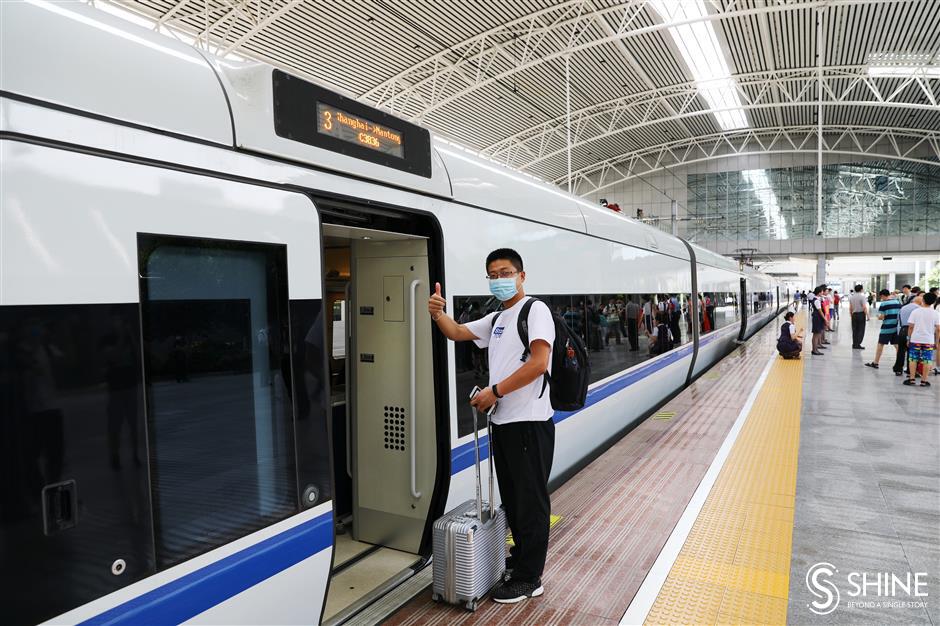 A passenger gives a thumb-up before boarding the train. 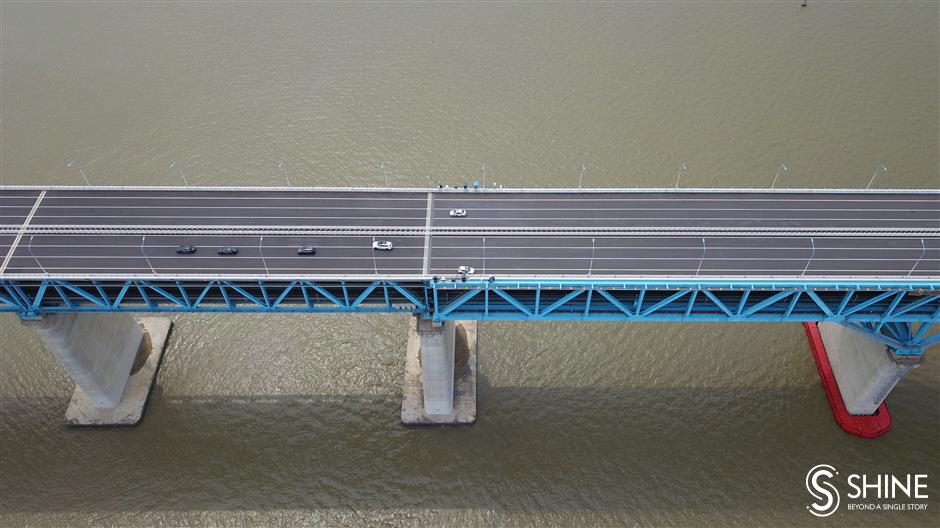 Zhang Wangyi, a Nantong native now working in Shanghai's Zhangjiang area, could not hide his excitement for the new railway opening.

"I used to spend a whole afternoon going to my rented apartment in Shanghai, and I have already got tired of it," he said.

"All of my family members are in Nantong and I tried my best to go home as frequently as I could, but the journey was too long somehow. This new route can save a lot of time for me and the journey becomes much more relaxed. The price is appropriate for me as well."

"I can have a more comfortable journey home now and I will do my best in Shanghai and try to bring my family there in the near future," Zhang said.

Zhou Meiying, a 67-year-old woman, was traveling with a tour group which was formed specially for the new railway.

"I live near Zhangjiagang and I joined the group with my friends," she said excitedly.

"This time I'm travelling with my friends, and you can find that my friends are so excited to see the new bridge (the Shanghai-Suzhou-Nantong Yangtze River Railway Bridge),” she said.

"We will adjust the frequency of trains on the route for working days, weekends and festivals," said Lu.

The design of stations on the railway incorporate cultural features with the introduction of Jiangnan gardening landscapes.

The construction also gives consideration to the protection of the Tianfu National Wetland Park, located along the track.

"Its design and construction has achieved several breakthroughs," he said.

At 11,072 meters long, it is the world's first cable-stayed bridge with quadruple-rail-track, six vehicle tracks, and with over 1,000-meter main span.

The second phase of the Shanghai-Suzhou-Nantong railway project is the Taicang-Situan section, starting from Taicang and ends in Shanghai's Fengxian District. Its timetable is yet to be announced. 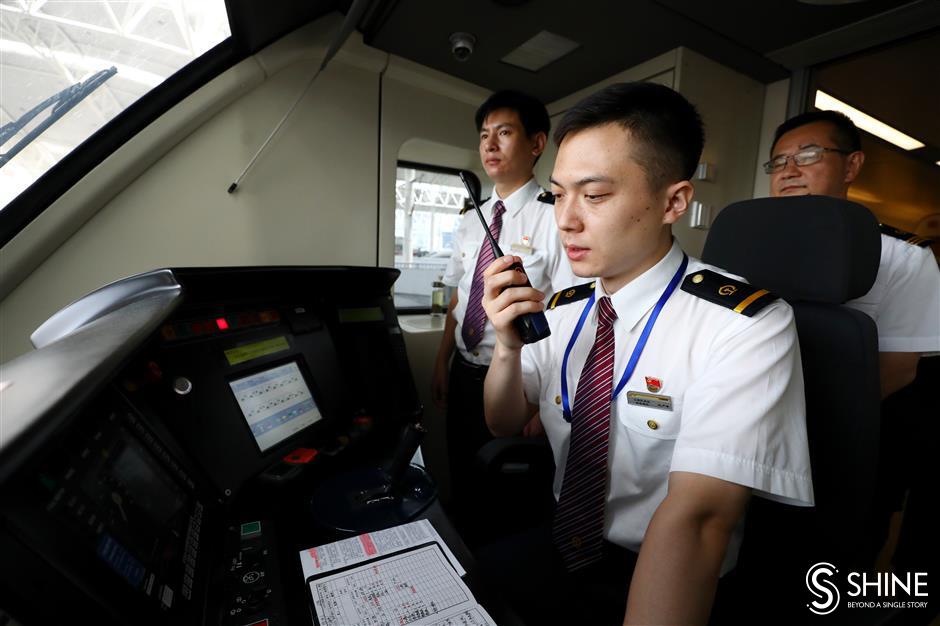 Cabin of the train. 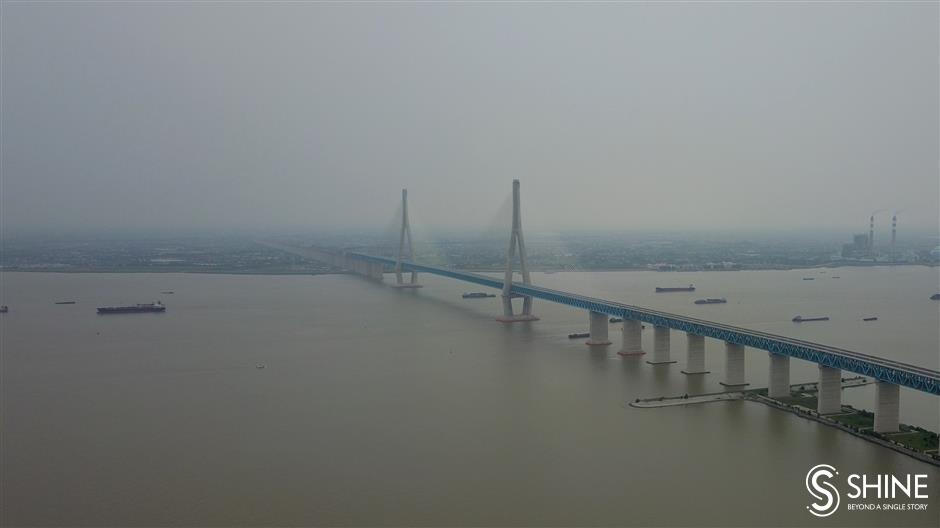 The Shanghai-Suzhou-Nantong Yangtze River Railway Bridge captured during the trip.