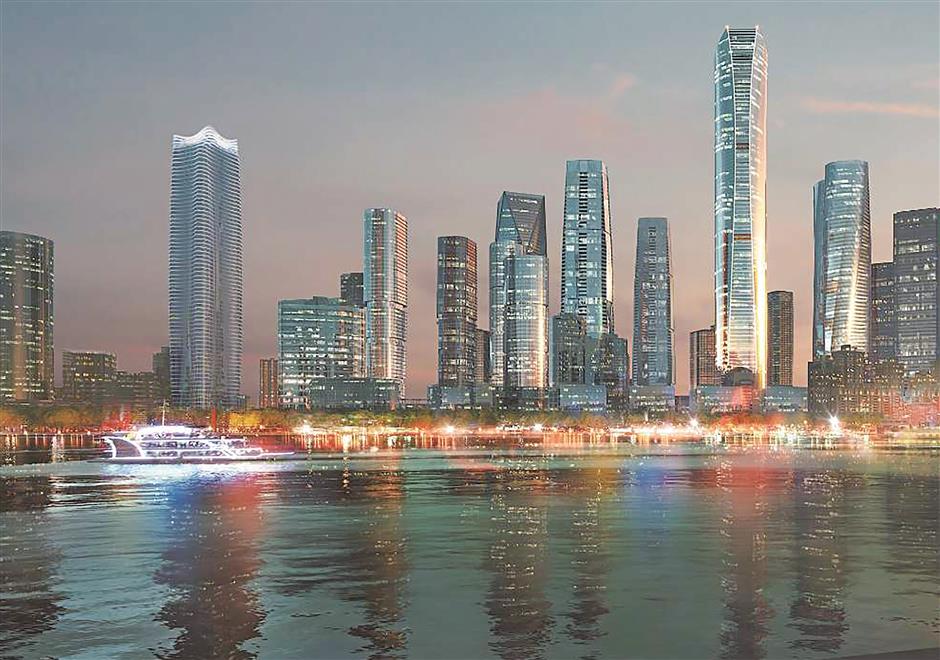 An artistic rendition of the future North Bund waterfront in Hongkou

Global investors and foreign consuls were invited to the North Bund in Hongkou District in late June to learn about the new round of regional development, a new engine of growth in Shanghai.

The global promotion meeting for the development of the North Bund was held in the west tower of Raffles City Hongkou, where guests took in a panoramic view of the riverside region along the Huangpu River.

Standing on the building’s 56th floor, Hongkou District officials and Shanghai’s urban planners spelled out their vision for the North Bund to become the city’s “most beautiful parlor.”

Along with the Lujiazui financial hub on the east bank of the river across from the Bund, the North Bund forms downtown Shanghai’s “golden triangle.” Riverside regions have already been transformed with greenery and walking paths.

Rows of shikumen, or stone-gate residences are being renovated. Some plots have been cleared for constructing skyscrapers that will reshape the city’s skyline.

It will be flanked by regions around Tilanqiao and the Hongkougang River, where places of historical and cultural importance will be completely preserved.

The riverside region, covering about 4 square kilometers, will be on par with the Lingang Special Area and the Pudong New Area in the eastern part of the city and the demonstration zone for the integrated development of the Yangtze River Delta region and the Hongqiao Business District in the west.

About 8.4 million square meters of new construction have been designated for the North Bund, equal to the total area of buildings in Lujiazui and both sides of Century Avenue in Pudong.

The new development will consist of more than 200 office buildings, including dozens of top-level office towers accommodating up to 100 multinational corporations’ headquarters, international organizations and functional institutes. 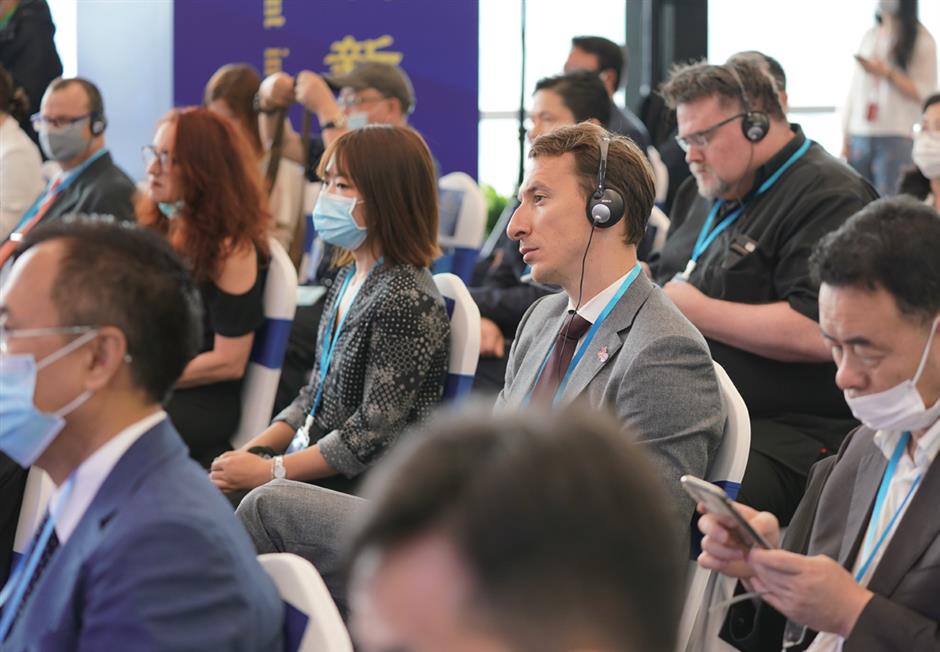 Investors attentively listen at the investment promotion conference for a new round of development for the North Bund.

The North Bund is already home to more than 1,600 financial companies with 5 trillion yuan (US$705 billion) of assets under management, including one-ninth of China’s mutual funds and more than 4,700 shipping-related companies, including COSCO Shipping, Shanghai International Port Group, the China Shipowners’ Association and Costa Cruises.

Ten new financial, shipping and industrial Internet companies signed agreements to base themselves in the North Bund area this month alone. These include the asset-management arms of TF Securities and Baibu, a cloud factory platform for the textile sector.

“We plan to develop into an international platform, so we chose Shanghai as our new headquarters for its leading position in industrial Internet and international atmosphere,” said Guan Ruifeng, vice president of Guangzhou Zhijing Information Tech, which owns Baibu. “We’ve learned the North Bund will become the future ‘sitting room’ of Shanghai and play a core role in the city’s development, which is in accordance with the company’s blueprint.”

The signing ceremony was held in the 320-meter-high Sinar Mas Plaza tower, currently the tallest structure in Puxi. In the future, a 480-meter landmark structure is planned for the North Bund to echo the Lujiazui skyscrapers across the river.

The new building will become the tallest structure in Puxi and the third-tallest in the city, after the 632-meter Shanghai Tower and the 492-meter Shanghai World Financial Center in Lujiazui.

An investment guideline for the North Bund to attract additional corporations from across the world has been released.

“The North Bund will become a key development driver for future Shanghai and reach top international standards with its industrial atmosphere, environment, infrastructure and medical and education systems,” Hao said.

Zhou Qun, a senior official with Sinar Mas Paper (China) Investment, an arm of the Indonesian conglomerate, said her company is proud to be involved in the master plan and development of the North Bund.

“We think highly of China’s economy and Shanghai’s development,” she told reporters from the top of Sinar Mas Plaza tower.

Wang Yilin, general manager of King Cool Media, a virtual-reality technology firm based in Hongkou, said his company is poised to capitalize on the rapid development of the area and advances in 5G technology.

The company cooperated with China Central Television to launch a virtual-reality live broadcast of the grand military parade on National Day in October of last year.

“With the help of 5G technology, we are able to provide real-time, panoramic, live broadcasts,” Wang recently said at the world’s first 5G application innovation center in the North Bund.

Shanghai General Hospital, for example, has been working with China Mobile on patient-information transmission and communication between ambulances and hospitals via 5G, said Yu Hua, information director of the hospital.

The waterfront is fully covered with 5G signals, Wang said.

The Chunyangli neighborhood near the North Bund, a shikumen community built between 1921 and 1936, is under renovation, with many apartments rented to employees working at nearby office buildings.

“Young office workers are welcome to be our neighbors,” said Hong Guozhen, a senior resident who has rented her renovated apartment to young employees. “I will ask them to dinner if they are too busy to cook themselves.”

For residents’ and office workers’ convenience, there will be 10 subway stations on four Metro lines.

The planned Line 19 will further connect the waterfront region, and a public transport hub will be located on Haimen Road. Down the road, waterfront visitors will be able to take a bus and get to within 600 meters of the river or walk for eight minutes from a Metro station.

The planning authority has also designed an underground and overhead walkway system connecting Metro and bus stations. A two-story skywalk will connect office buildings, subway stations and commercial facilities on the riverside.

A “slow walk zone” for pedestrians — nearly half of which will be off limits to vehicles — has also been planned.

An underground rain-collecting system will be installed to recycle water and prevent the waterfront from being deluged during the rainy season.

“The North Bund is expected to become the development model for Shanghai for the next 10 to 20 years,” said Wu Jiang, executive vice president of Tongji University and a member of the planning team for the North Bund.

Hongkou Party chief Wu Xinbao said the district aims to make the region fully functional in five years. Waterfront redevelopment is due for completion within 10 years.

“Redevelopment of the North Bund will create a new miracle,” Wu said. 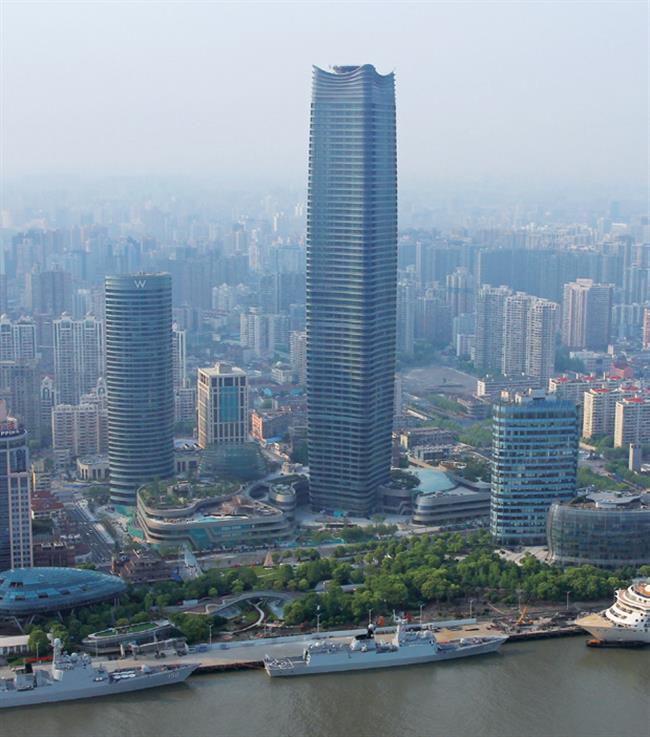 China opened its eyes to see the world from the North Bund, said Wu.

The North Bund possesses other distinctions as well. China’s first electric lamp was illuminated there, and it was also the site of the nation’s first telephone call and movie. Due to its ports, the area absorbed culture from China and the rest of the world in the 20th century.

During World War II, shikumen structures in the North Bund offered safe haven for many Jewish refugees fleeing the horrors of Nazi Germany. About 23,000 Jews took shelter in the city, particularly in Tilanqiao.

Many historical structures have been preserved and turned into cultural venues. They include the Shanghai Jewish Refugees Museum, which incorporates the historic Ohel Moishe Synagogue, the Dock Culture Museum and the China Securities Museum, renovated from the famous Astor House Hotel. Dating back to the 1930s and known as the largest storage site in the Far East, the Yung Shine Warehouse is being converted to Shanghai Fintech Park.

Historical structures are also under renovation along the Hongkougang River, from which Hongkou gets its name. A 3.4-kilometer riverside path along the river is under development.

A section featuring the history of Shanghai’s Jewish refugees will be developed in the North Bund as a new cultural landmark.

The “Ark on the Sea” will be created around Tilanqiao. It will include the century-old Tilanqiao Prison, formerly known as Ward Road Gaol, the Xiahai Temple, dating back to the Qing Dynasty (1644-1911), and neighborhoods that once harbored Jewish people fleeing Nazi persecution.

Within the region, the Shanghai Jewish Refugees Museum will expand to almost four times its current size to accommodate new exhibitions and visitors that have increased 10-fold since the museum opened its doors in 2007.

Remarks from the experts’ panel to guide the North Bund development:

“We need to tell more stories about the North Bund’s past, present and future to showcase more Chinese wisdom, charm and outlooks as well as the spirit and quality of the worldclass parlor.”

“The ongoing urban renewal of the North Bund is expected to be the beginning of a new development pattern for the city. Urban renewal can never be done with a single mission but with eternal and continuous development.”

“The top agenda for the North Bund is to serve people with urban renewal while inheriting traditional culture.”

“There are still 15,000 residents living in the derelict residential houses on the North Bund. By 2022, they will be relocated to improve their living conditions while sparing additional redevelopment space for the region.”

“The new round of development on the Bund is another milestone in Shanghai’s urban development following the opening-up of the Pudong New Area three decades ago.”

“The North Bund represents the rich modern history of Shanghai and China. It is a truly original place for Haipai (Shanghai-style) Culture.”

“Every building and every corner on the North Bund have their own stories.”

“Most part of the North Bund will be preserved during its redevelopment to retain the heritage of Hongkou.”