An art performance is staged at the Mid-Lake Pavilion on the Zigzag Bridge at the Yuyuan Garden Malls.

Yuyuan Garden Malls is launching a retrospective event from Friday to invite visitors to experience its historical vibes dating back some 400 years.

The dining and shopping facilities near the historic Yuyuan Garden originated from a prosperous temple fair market around the City God Temple and a drill ground in the Ming Dynasty (1368-1644). Typical local-style woodblock prints named Xiaojiaochang, literally meaning "small drill ground," depicted prosperity in the Ming and Qing dynasties.

The landmark site now plans to restore the bustling temple fairs of several centuries ago with traditional lantern shows, art performances, food bazaars and various events such as night jogging.

A series of shows and performances will be held at the malls, featuring upgraded classic decorations, until the end of the year. In July and August, most events will be held between 2pm and 10pm on weekdays and 10am to 10pm on weekends.

Jiujiaochang Road, which means "old military drill ground," will be renovated as a main attraction to highlight the history of the malls. An immersive fair about traditional Chinese culture will be held along the 300-meter street.

Performers in traditional hanfu clothing will parade across the malls and interact with visitors. Their traditional clothing styles will be adjusted according to the solar terms and traditional festivals. Citizens and tourists are also encouraged to dress in hanfu to better experience the historical atmosphere.

"The event aims to bring the customers back to some 400 years ago to feel the city's historical temple fairs while learning about traditional Chinese culture," a malls official said. 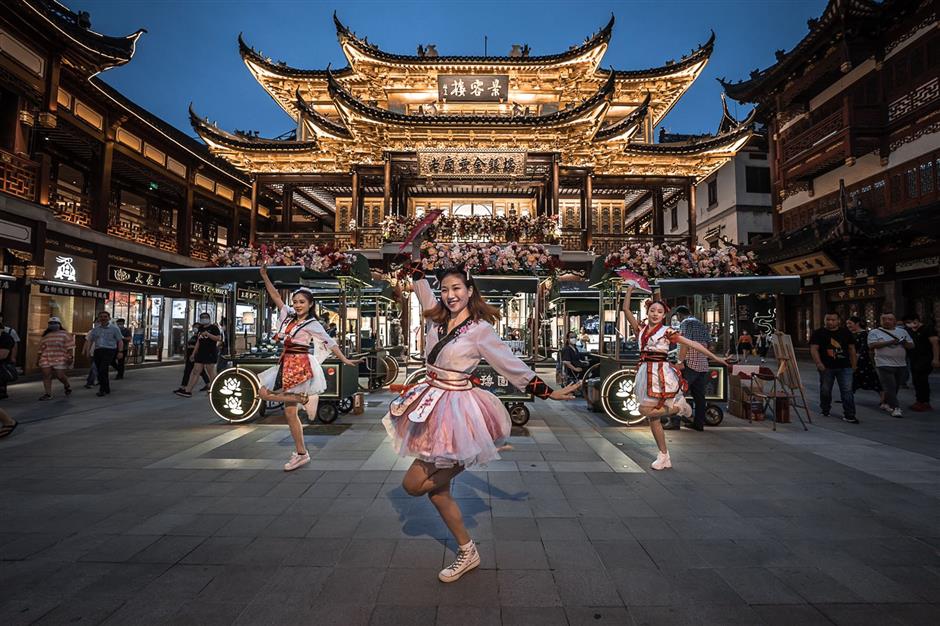 Traditional performances are staged at the Yuyuan Garden Malls.

The Central Plaza resembles the scene at classic kung fu movies where swordsmen can gorge themselves with delicacies and wine. The Zigzag Bridge will be turned into a ferry port market to mainly show Jiangnan culture from south of the lower reaches of the Yangtze River.

Over a thousand lanterns made with the city's listed heritage skills will illuminate Ninghui Road.

Many modern performances such as street dances, magic shows, puppet shows and outdoor concerts will show the city's haipai or East-meets-West culture, the official said.

A night market will have over 40 carts offering traditional food as well as wine and drinks. Visitors can also play traditional games such as touhu, or arrow throwing at the market.

The malls will also host a cooking competition to invite famous chefs from local Michelin-starred restaurants to compete with their counterparts at the malls.

Popular Yuyuan eateries, such as the century-old Nanxiang Steamed Bun Restaurant, the Shanghai Classical Hotel which opened in 1875, Chunfeng Songyue Tower, the oldest vegetarian restaurant in Shanghai, and Ningbo Sweet Dumpling Restaurant will take part in the contest.

Night jogging will be held regularly in a joint event with the Fengjing Road Night Market on the Bund. Joggers will be organized to set off from the malls toward the Bund and run back to fully enjoy the night scenery of the Bund and the malls, according to organizers.