Breakfast on the go in Zhangjiang High-tech Park 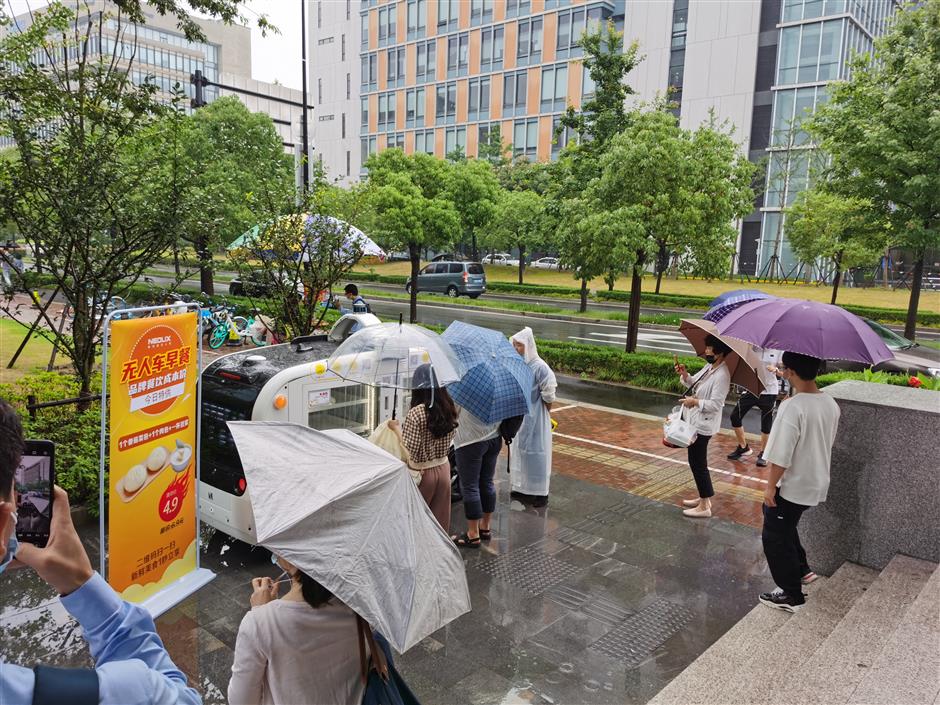 Neolix’s vending-machine vehicle is selling breakfasts outside a Metro station in Zhangjiang.

The vehicles were launched by domestic technology company Neolix in Zhangjiang last month after the company incubated at Zhangjiang AIsland, an emerging hub for the artifiical intelligence industry.

Zhangjiang is every AI company’s dreamland to pioneer cutting-edge technologies and new applications, according to the company’s co-founder Ren Beini.

Neolix’s vehicles, equipped with cameras and radar detectors, start the day as a breakfast stand outside a nearby Metro station. By scanning a QR code, customers can buy a traditional breakfast of two steamed buns and a cup of hot soy milk for 4.9 yuan.

“In a trial operation late June, our vehicle sold out products in half an hour despite a downpour,” Ren said.

They then return to AIsland.

At lunchtime, they hit the road again. They stop outside office buildings with box lunches on offer. In afternoon, they act as a mobile beverage stand and move around. Like hailing a taxi, people can wave their hands and they will stop to sell a variety of drinks.

“We hope to help food brands get closer to customers, and also offer convenience to local workers,” Ren said. “But our vehicles are more than deliverymen. As smart robots, they can also take body temperatures of passersby, disinfect the area and patrol around.”

As the trial operation had proved a success, the company has decided to develop more functions in Zhangjiang. It has also decided to move its East China headquarters to Zhangjiang, according to Ren.

AI is revolutionizing traditional industries. In Zhangjiang AIsland, local technology companies have empowered AI in many sectors, from health care to management.

A wearable exoskeleton helps with lower limb rehabilitation and a robotic hand allows paralyzed people to control movements. Smart fridges will alert users about expired food, and a gas cooker will automatically close to prevent boiling over.

There are also patrolling drones, remote-control irrigation systems, and a smart litter bin that can sort garbage.

“When traditional industries receive support from AI, they will be granted a new lease of life and even create new trends,” said Yuan Tao, chairman of Zhangjiang Group.

Zhangjiang is now focusing on accelerating the combination of AI and other industries. A near-future example is an AI future community, a 46,000-square-meter AI pilot community near the Zhangjiang AIsland, according to Yuan.

It will be complementary to Zhangjiang AIsland, where technology companies can display and put their latest technologies to use. Walking around, people will feel as if they are living in the future, with robots all around, Yuan said.

Construction of the future community is estimated to be complete by the end of this month. Several companies, such as Neolix and IHG’s new hotel providing AI services have signed up.

Zhangjiang AIsland, launched in 2018, is home to more than 90 companies and institutes, including Alibaba Shanghai R&D Center, IBM's Shanghai headquarters and research and development facility, and Microsoft Artificial Intelligence and Internet of Things Laboratory.

By the end of the year, it will have more than 100 companies, making Zhangjiang AIsland a star in the city’s industrial parks featuring most AI companies and talents, as well as the most advanced technologies, Yuan said.

In a year, Microsoft Artificial Intelligence and Internet of Things Laboratory has offered leading intelligent technology tools to more than 300 companies, helping to make innovation faster and more accessible.

“We provide algorithms and help clients to reach different resources to solve their difficulties. So, they don’t need to pay additional attention to take care of what they know less about,” she said.

TMiRob, a robot maker based in Zhangjiang, has benefited.

The company has sent disinfection robots to Wuhan to aid local hospitals in the anti-virus fight. As public awareness of hygiene grows, the company has found a bigger market, such as classrooms and airports. However, it needs complicated AI algorithm calculations, and TMiRob turned to Microsoft

“It has helped us to save a lot of time,” said Pan Jing, the company’s chief executive officer. “My company is just an epitome of how technology startups benefit from Zhangjiang’s great innovation ecosystem.”

“Zhangjiang will play the role as a platform to provide rich resources and great application scenes to accelerate this industrial revolution,” Yuan said. “By 2025, we hope to form about 20 open innovation platforms, backed by industrial tycoons, and at least 15 Unicorns. Also, we want to attract more than 50 industrial leaders to Zhangjiang.”