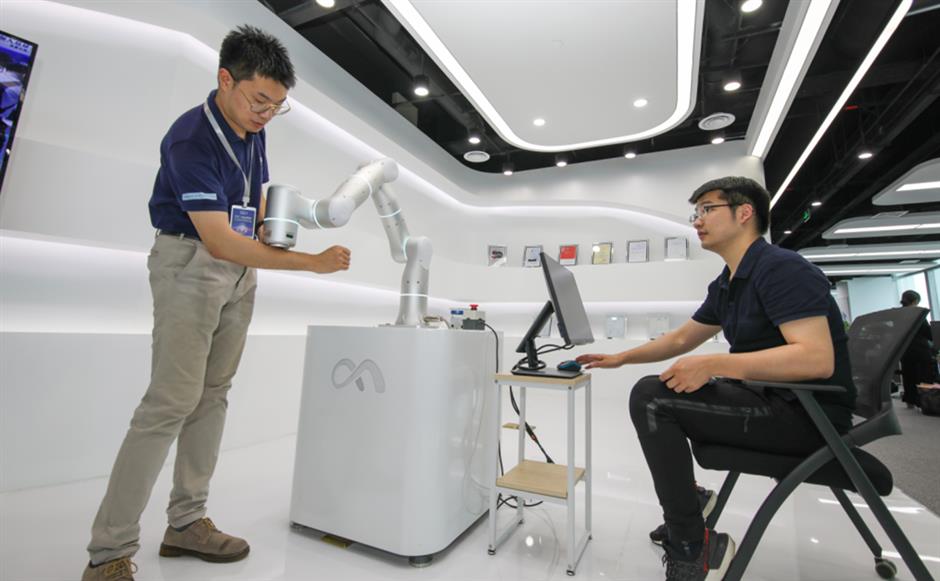 The West Bund waterfront in Xuhui District not only attracts tourists for its scenery of the Huangpu River, but it’s also a center that attracts some of the world's top scientists and companies working in the realm of artificial intelligence.

The riverside region reflects the city’s early industrial heritage, once encompassing a coal wharf, a cement factory, several giant fuel tanks and an aircraft hangar. Today, it has ambitions to become the “Artificial Intelligence Valley” of Shanghai.

Twenty leading companies in the sector from home and abroad — including Microsoft Research Asia, Huawei and Alibaba, and startups like United Imaging and Yitu — have offices in one of the buildings. The idea is to create a “vertical AI industrial chain” of production, study, research and application.

Driven by the city government’s ambition to lead the world in the development of artificial intelligence, downtown districts like Xuhui are turning historical industrial sites into innovation parks related to the burgeoning technology.

Residents are now becoming more aware of artificial intelligence, a concept new to most of them when the World Artificial Intelligence Conference was held three years ago.

Wu Minghui, president and chief executive of Mininglamp Tech, which focuses on AI-driven marketing strategies, relocated the headquarters of his company from Beijing to the AI Tower in Xuhui this year. It occupies the 29th to 32nd floors of the building. 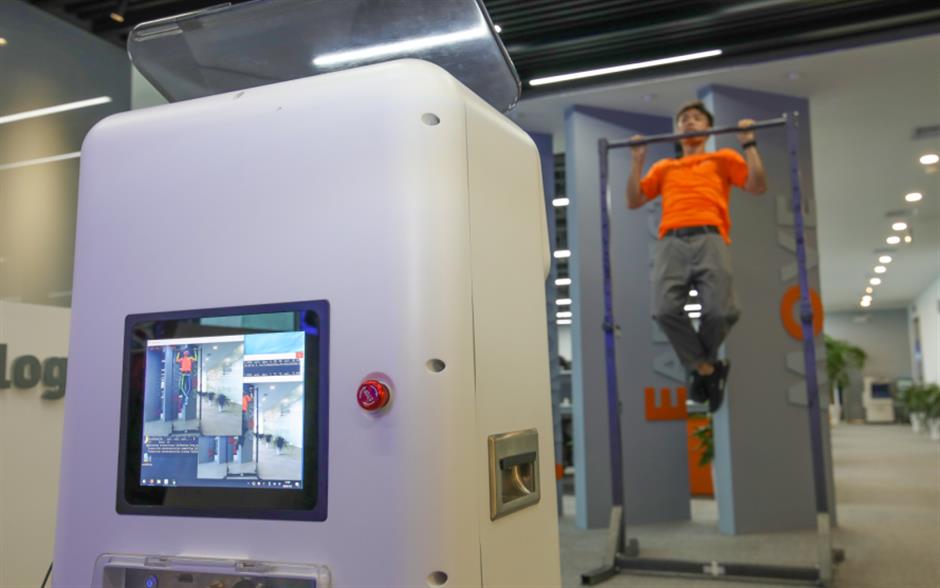 A robot serves as personal fitness trainer at the AI Tower.

“Many of the world’s top 500 enterprises are based in Shanghai,” Wu said. “We need to stay closer to our clients. We have many neighbors in the building that are leading companies in the AI industrial chain, and cooperative opportunities exist.”

The company Wu founded in 2014 is now developing marketing strategies for global enterprises such as L’Oréal, Coca-Cola and KFC, as well as offering smart management solutions for Shanghai’s Metro system.

Upstairs, the 43rd floor of the 45-story east tower has been taken over by Microsoft Research Asia. An office there with the best riverside view serves as a training room. Top AI scientists in the research institute share the latest AI technologies with interns and young engineers.

“The institute has trained over 6,000 interns since it opened China’s first research center in Beijing in 1998,” said Liu Kangping, an official in charge of the institute in Shanghai.

“Many have become leading AI scientists or successful entrepreneurs working in the same building now.”

Elsewhere in the building, Huawei has created an innovative center for its Kunpeng processors, and Alibaba is developing artificial intelligence solutions for cultural, entertainment and retail sectors. 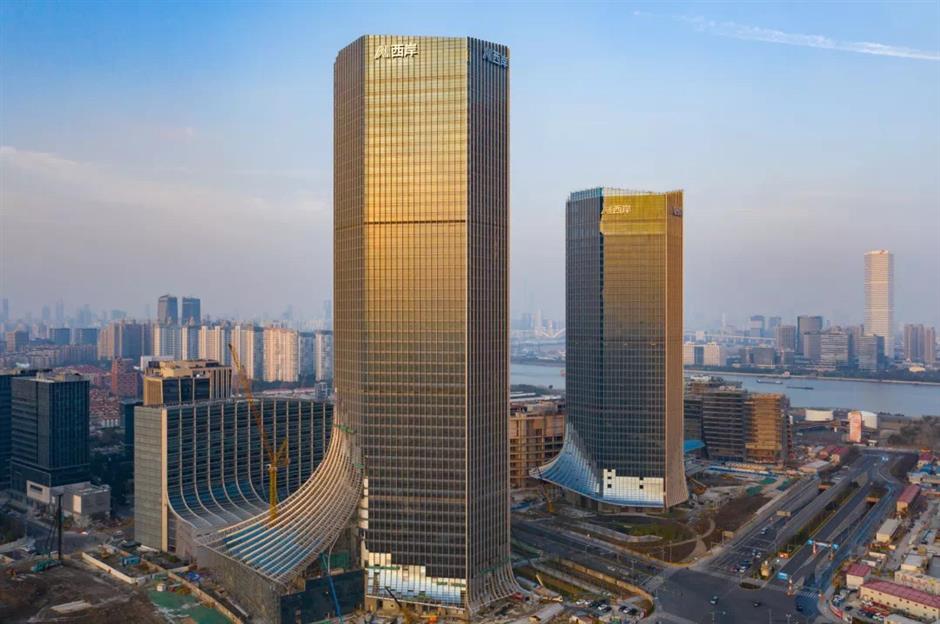 Also on the Huangpu River waterfront, the Changyang Campus in Yangpu District has been designated as Shanghai’s first downtown artificial intelligence park. It was renovated from the old Donghua cotton mill, built in 1920.

Intelligent robots, gadgets incorporating facial recognition, automated driving and the Internet of Things are everywhere you look on the campus. An unmanned shuttle bus known as Apollo carries people around.

About 20 AI specialist companies have moved into the campus, comprising about half of enterprises there. They include linguistic teaching app Liulishuo, AIWays Auto, which is working on self-driving vehicles, and Rontgen Medical, a company involved in medical imagery.

Accenture’s Digital Hub, the company’s second research center in China, is working on the latest in robotic arms, an automated bus and manufacturing processes that will help local enterprises achieve higher levels of efficiency.

Three security robots patrol the campus around the clock, with facial recognition cameras to detect unwanted intruders. They automatically alert the police the instant any suspicious person is detected.

Employees at the park can play table tennis with a robot or utilize an unmanned store, café and gym, were robots make coffee and serving as personal fitness trainers.

In Putuo District, near the riverside of the Suzhou Creek, the China-Israel Innovation Hub aims to become a testing site for a smarter urban-management system empowered by artificial intelligence.

The innovation park was renovated from Shanghai’s Hero pen factory, a company established in 1931. Such industrial heritage is being incorporated into an AI park jointly operated by the Putuo District government and the Lingang Group.

During the renovation, Internet of Things technology has linked up the park’s lighting, energy, elevator controls and environmental monitoring. 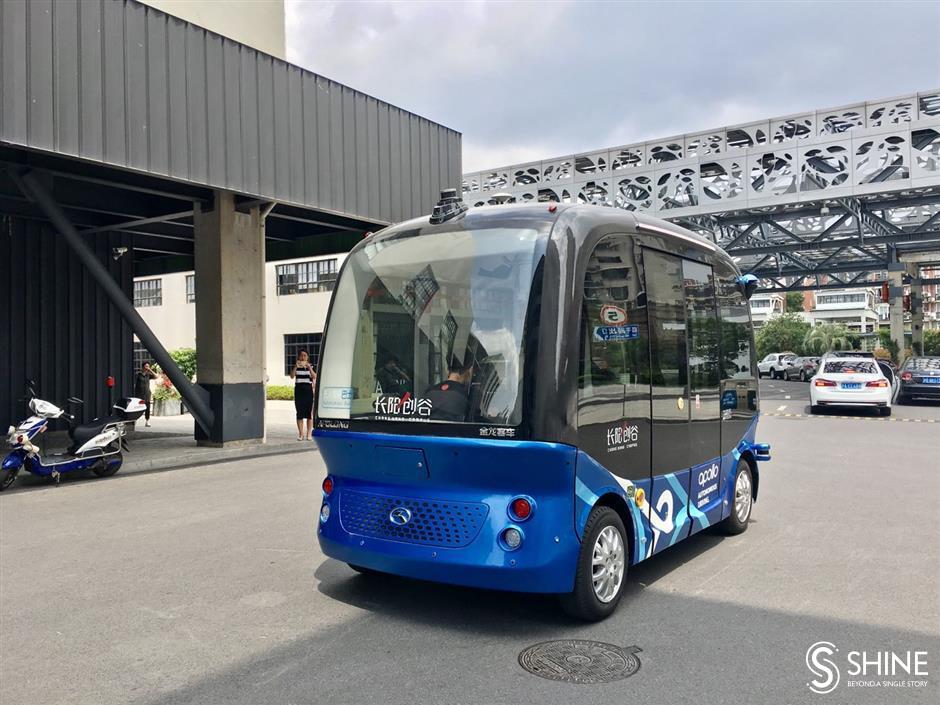 The Apollo unmanned shuttle bus ferries visitors around the Changyang Campus in Yangpu. 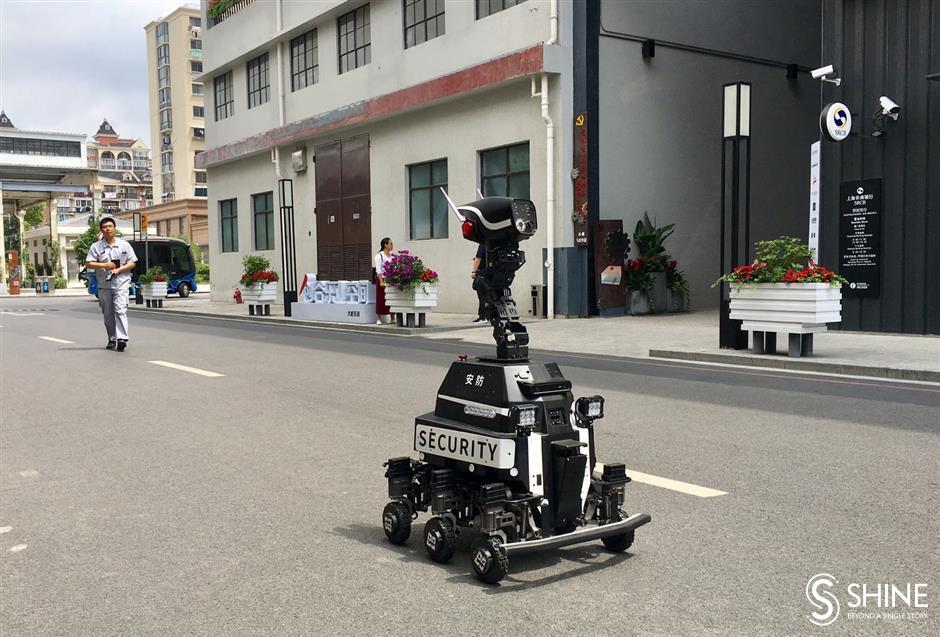