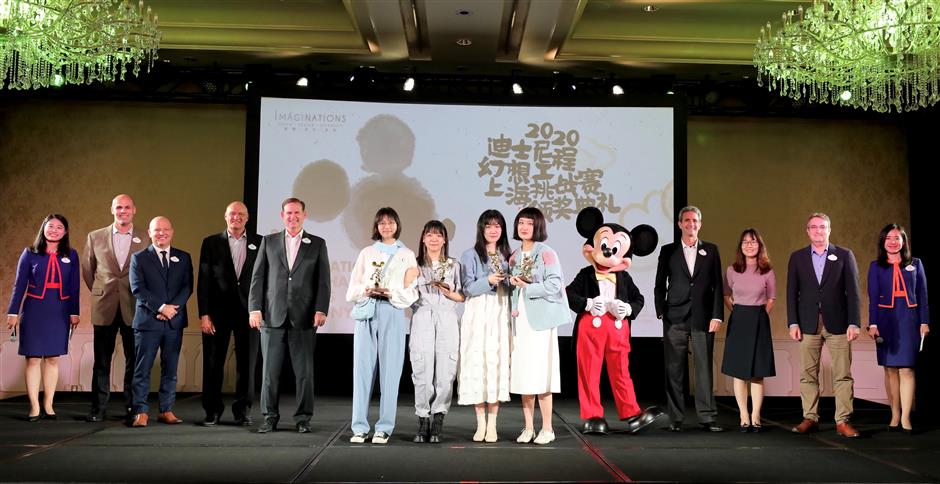 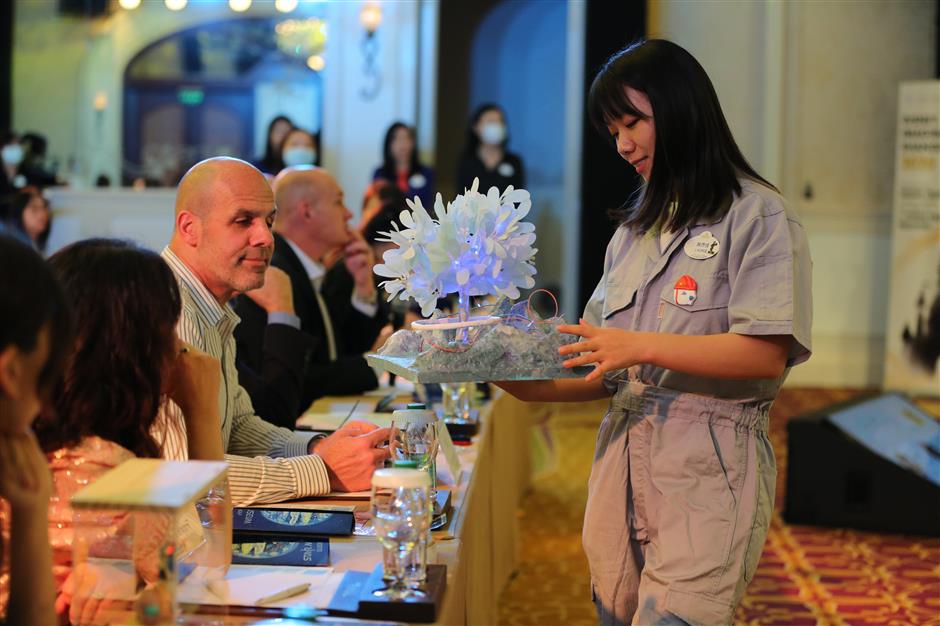 Students from Donghua University won first prize in a Disney design competition with their proposal for a new attraction.

Winner of the 2020 Disney Imaginations Shanghai design competition, “Galaxy Valley” is designed to raise people’s awareness of environmental protection and offer an escape from social loneliness.

“When the natural resources run out on the Earth in the future, people send spiritual animals to find a new home in the universe. Galaxy Valley appears to be a perfect place,” team member Yang Fan said of the team’s concept of creating a future wonderland.

In Galaxy Valley, visitors can ride a solar-powered roller coaster, or board manually-operated mine cars, stopping anytime during the tour to dig in artificial mines. Spiritual animals accompany and interact with visitors, including planting trees together..

The four-woman team said they decided to focus on the environment based on their experiences.

Cai Yiran said: “I was impressed by a tour to Yosemite. It was my first time to cook in the wilderness. Previously, I never had the chance to be so close to nature.”

Yang said: “I went to Norway last year. We drove in mountains and swam in rivers. We felt so free. In the metropolis, we are far away from nature. Big cities are well planned, but they lose wild beauty.”

She added: “Also, today, many people say they feel left out and less understood. So, we created cute talkative spiritual animals to offer comfort to lonely hearts.”

The winning team will enjoy a three-day trip to Shanghai Disney Resort, where they will go behind the scenes to learn from with Disney Imagineers.

The team will also continue their creative journey by interning at Shanghai Disney Resort, where they will learn from some of the most creative minds in the industry.

“Today’s presentations showcased incredible creativity, innovation, and an impressive understanding of what it takes to design the kind of industry leading attractions that Disney offers our guests worldwide,” said Joe Schott, president and general manager of Shanghai Disney Resort.

“Shanghai Disney Resort has always been committed to developing local talent, and the exceptional quality of the work produced by today’s participants is a testament to the limitless potential of students across China. We look forward to working with more universities in the years to come to bring the Disney Imaginations Shanghai design competition to more students than ever before.”

The second Disney Imaginations Shanghai design competition, supported by the city’s education commission and science and technology commission, was launched in 2019 with a series of roadshows.

“All the judges were deeply impressed by the quality of the designs and presentations we heard,” said Howard Brown, general manager of Walt Disney Imagineering Asia.

“Imagineers are all about creating innovative and immersive experiences, and these students demonstrated a keen understanding of how to achieve this. This program is an incredible way to inspire and encourage local talent, and I can’t wait to see these young designers grow — they all have extremely bright futures.”

In the final on Thursday, “Star Wander” from the Shanghai Institute of Visual Arts took second prize, while “Star Beat” from the China Academy of Art won third place.

The final was held at the Shanghai Disneyland Hotel, where five finalists pitched their ideas.

The judges looked for excellence in conceptual design, technological innovation, creativity and storytelling, and after questioning the teams on their designs, made their selection based on teams’ ability to work together and to tell a compelling and engaging story.

“I have learnt from Disney’s movies a lot because they created magic worlds and built up unique world visions,” said Xu Luwen from “Star Wander,” which offered an immersive ride similar to Pirates of the Caribbean Battle for the Sunken Treasure.

“I’ve wondered how drinks in the cartoons taste, and theme parks like Disney make dreams come true,” she said.

Instead of having projects launched, it was more important to learn from the process, according to Ding Wenjia, whose team took second prize in the first competition.

After graduating from the East China University of Science and Technology, she joined the public affairs department Shanghai Disney Resort in March. Another team member, Bei Dianhui, now designs products for Disney.

“We received so much training before the competition, especially presentation and communication skills which has benefited me a lot during my work,” Ding said. "Also, we had the chance to explore hidden stories behind design of Shanghai Disney Resort."

The Disney Imaginations Design Competition was launched in the United States in 1991 with the purpose of seeking out and nurturing the next generation of Imagineers, and has grown around the world. Committed to bringing the best of Disney’s creative practices to local industries and to cultivating young talent in China, Shanghai Disney Resort launched the Disney Imaginations Shanghai design competition in 2018.