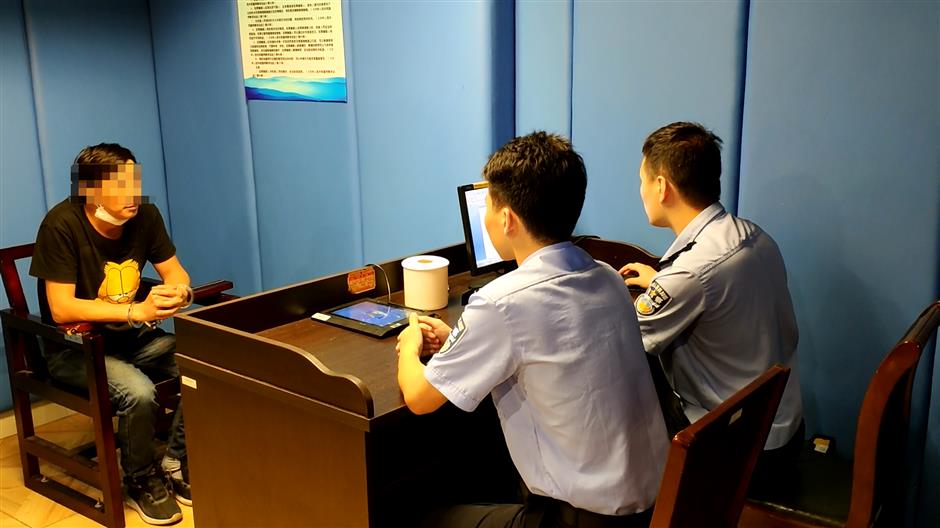 A man surnamed Yin, a suspect in a murder case in Fengxian District 26 years ago, is questioned by police who caught him in June this year.

A man alleged to have killed his girlfriend in Shanghai 33 years ago was caught in southern China, Shanghai police said on Thursday.

The man surnamed Wu was apprehended in the Guangxi Zhuang Autonomous Region at the end of last year for another offense but is said to have confessed to the murder to Shanghai police in May this year.

Wu is said to have killed his girlfriend in a residential complex in Putuo District on the evening of October 8 in 1987.

He was immediately identified as a suspect, but fled the city seven hours after the incident and police couldn’t track him down.

After a call from their colleagues in Guangxi, two police officers from Putuo District traveled to Guangxi to question Wu, finally gaining a confession.

Wu has now been charged with murder, police said.

In one case, a suspect in a murder that took place in a village textile factory in Fengxian District 26 years ago was finally tracked down.

The suspect, a man surnamed Yin, is alleged to have killed two colleagues together with another colleague on May 20 in 1994 and fled. The other suspect was caught in 1999 but Yin was still at large.

This year, police in Fengxian District renewed their search for Yin and noticed that at the end of May a person surnamed Yin in Dongguan in Guangdong Province had been in contact with his family in Zhejiang Province.

Suspecting that this was the Yin they had been looking for, police caught him in a factory in Dongguan in June.

Yin, who is said to have confessed, is under detention in Shanghai.