Hongqiao airport back on track, with prevention measures 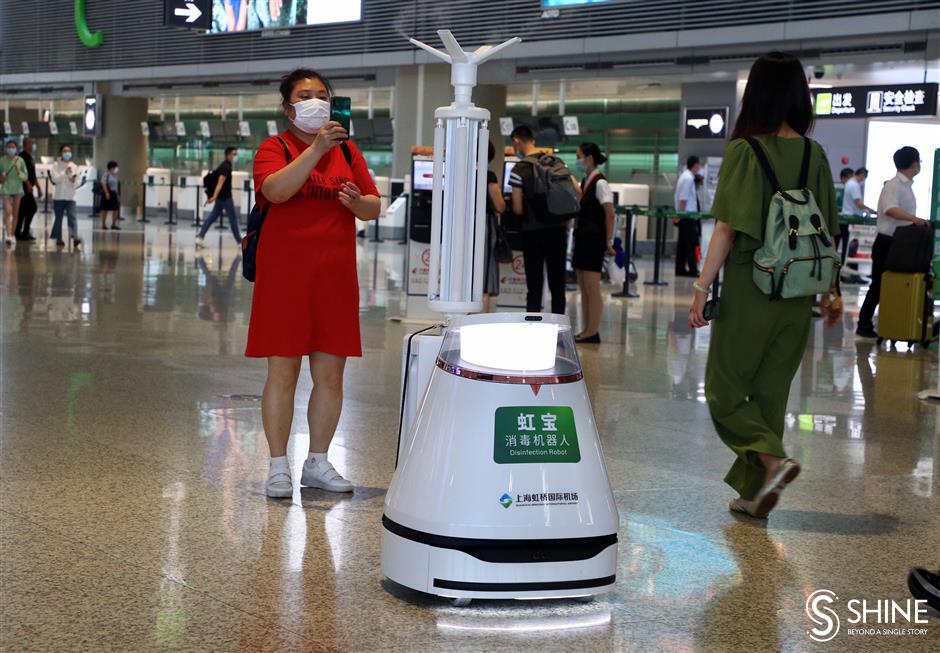 A disinfection robot named Hongbao works at the T2 terminal of the Hongqiao airport on Friday.

Hongqiao International Airport released China’s first epidemic prevention standards for its airport terminals on Friday as the number of flights and travelers rebounds.

The airport has handled about 87,000 passengers per day since the start of July, about 80 percent of its average capacity. About 630 flights had taken off and landed at the airport by the end of June, about 90 percent of the volume on year.

Five domestic airlines, including China Eastern, Spring Airlines and Juneyao, have released ticket packages allowing customers to fly freely through the end of the year, or upgrade their tickets, which has also brought more travelers back, said Tang Yicheng, an airport manager.

The volume of travelers is expected to further increase at the airport as the gaokao, or national college entrance examination, has ended and the summer vacation has begun, Tang said.

“As the COVID-19 pandemic wanes in China, the Hongqiao airport has begun its normal operations with regular coronavirus prevention measures,” Tang said.

An antibiosis nanometer material has been sprayed on the airlines’ counters and seats, while staff disinfect and clean public areas once every six hours. All security check staffers are asked to disinfect their hands once every 10 minute. Disinfection mats have been set at entrances to both terminals at the airport.

A staffer operates an ultraviolet sterilizing machines to disinfect trolleys at the Hongqiao airport. 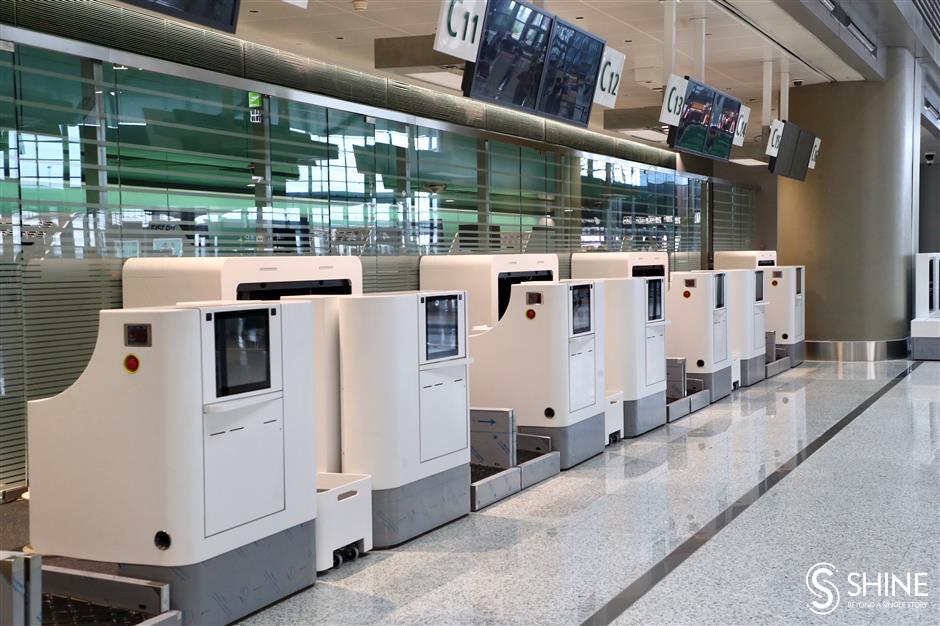 Eighteen new self-service check-in machines have been installed at the T2 terminal, which will be put into use by the end of July.

A disinfection robot has been deployed at the T2 terminal to spray disinfectant on about 10,000 square meters of public space. Ultraviolet sterilizing machines are working continuously to disinfect luggage trolleys.

To reduce contact, the airport has turned 80 percent of security check channels into self-service ones, where passengers can scan their ID cards and faces to complete certificate inspection. Passengers are reminded to keep at least a meter between each other when waiting for the security check.

A green channel has been opened on a trial basis for travelers with single bags to further distribute passengers and shorten the waiting time, said Zhang Jun, director of the airport’s security check management center.

Eighteen new self-service check-in machines will be put into use by the end of July, allowing passengers to check in tickets and luggage without the help of others.

The ventilation systems at the terminals have also been enhanced to 210 cubic meters of fresh air for every passenger per hour, far beyond the national standard of 30 cubic meters per hour per person.

Travelers can also buy masks and hand sanitizer at information centers at both terminals of the airport. About 60 masks are sold every day to those who forget to wear them or want to replace one, said Xie Fang, another official with the airport. 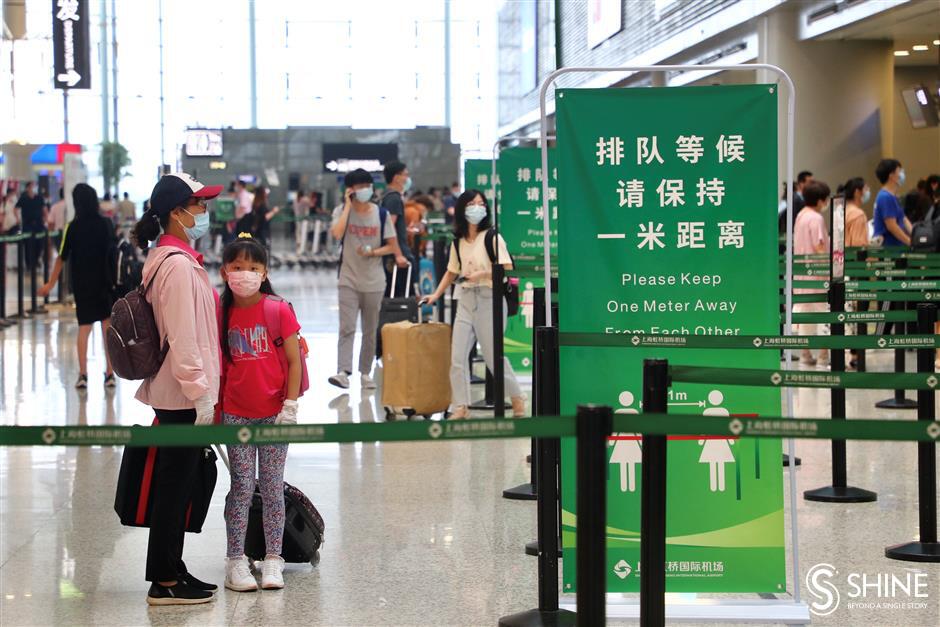 Reminders in both English and Chinese are placed at security check channels at the Hongqiao airport. 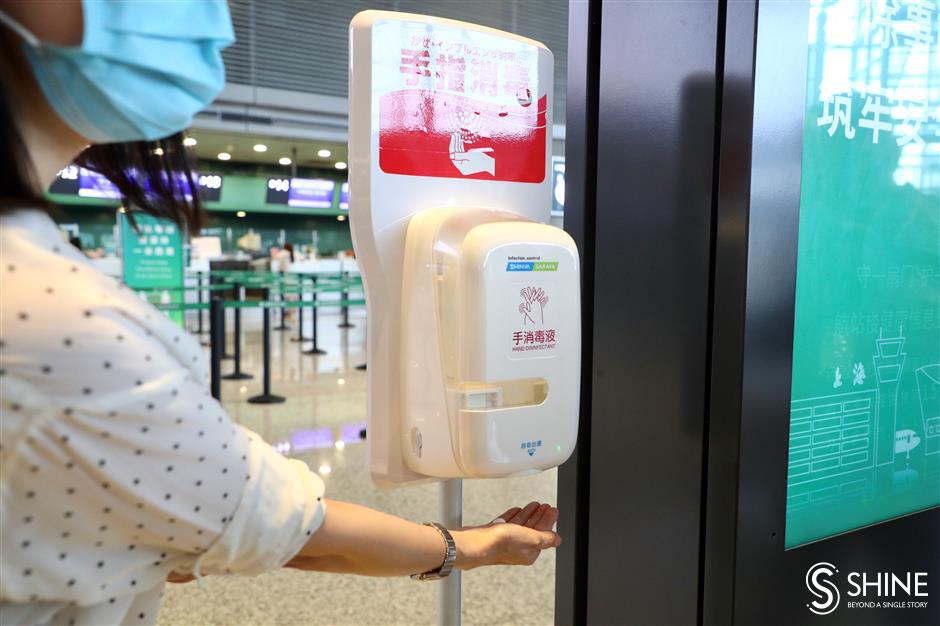 Hand sterilizer machines are installed at the T2 terminal of the Hongqiao airport. 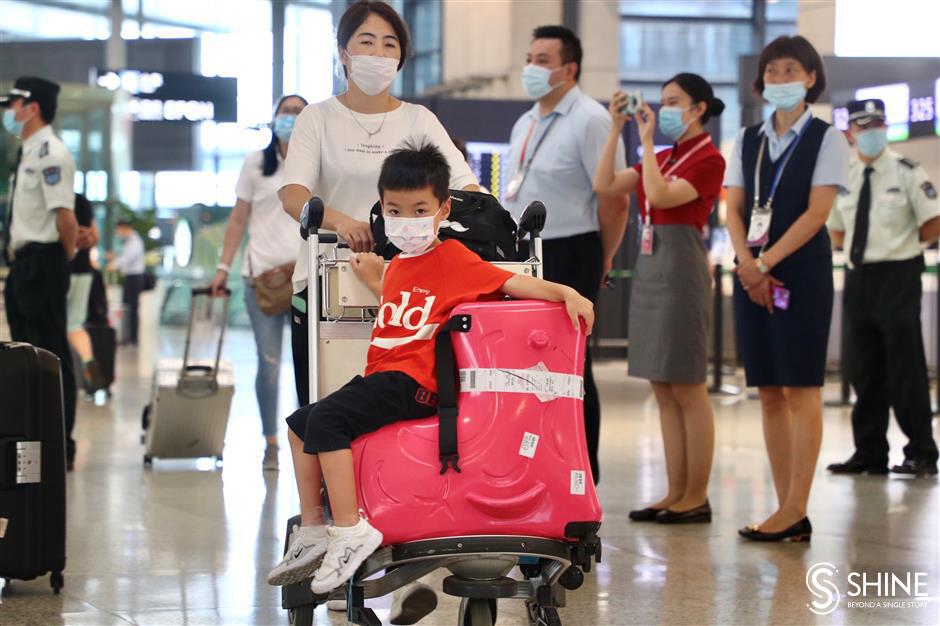 The number of travelers is rebounding at the Hongqiao airport.