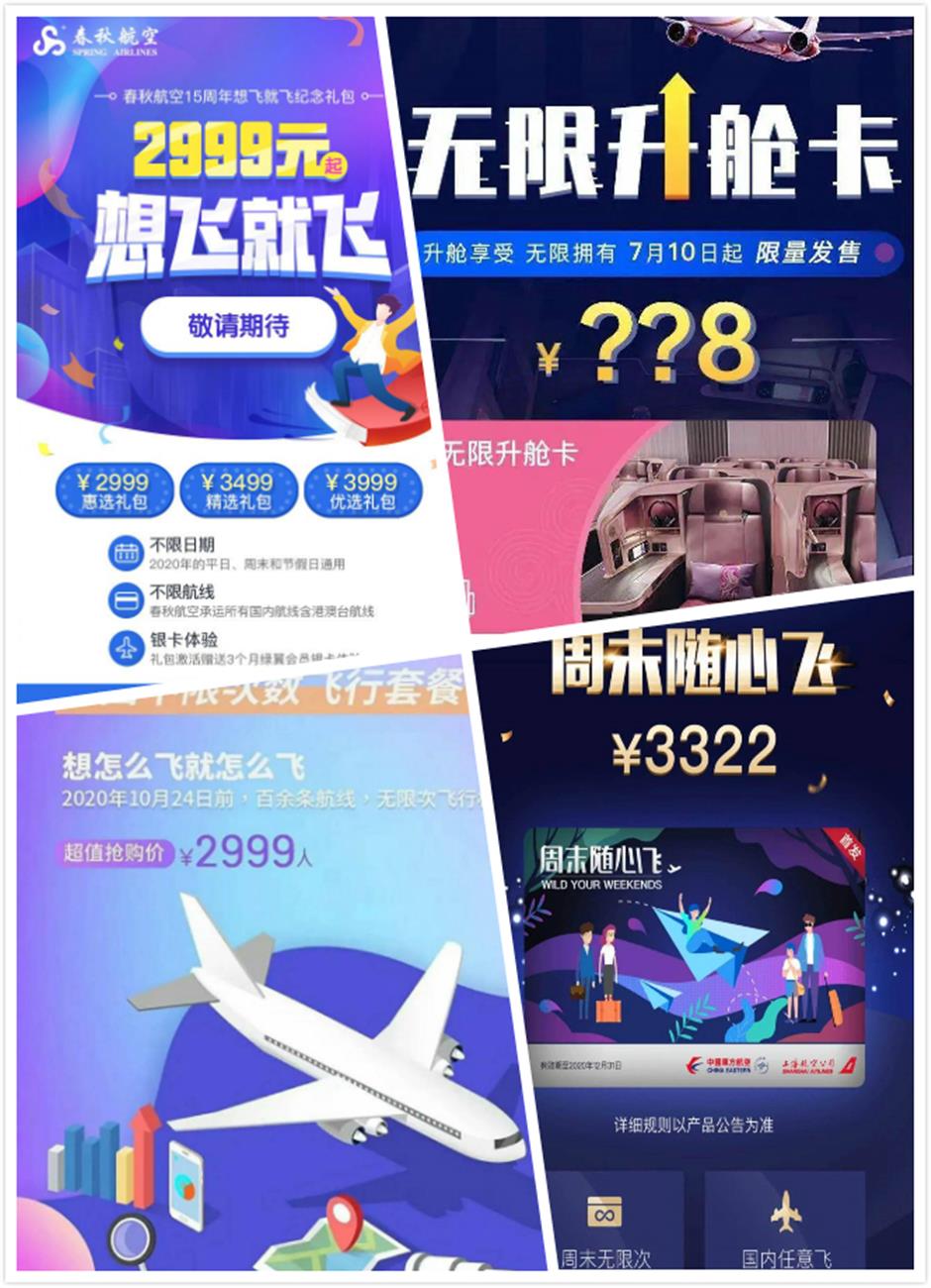 Multiple domestic airlines have launched ticket packages offering free flights or seat upgrades to make up for  business lost as a result of the novel coronavirus outbreak.

At least five carriers, including three based in Shanghai, are offering the deals.

Priced at 2,999 yuan (US$429), the package which is set to hit the market in mid-July, covers all the domestic routes of the budget carrier, including Hong Kong, Macau and Taiwan. It is also the first such package launched by a Chinese airline that has no limit on the frequency, date or route.

Passengers can choose more expensive packages at 3,499 or 3,999 yuan, which have additional luggage quotas or can be exchanged for business economy seats.

Spring Air said a return ticket from Shanghai to popular travel destinations, such as Chengdu in southwest Sichuan Province, Chongqing and Xi'an in northwest Shaanxi Province, can pay off the cost.

A single ticket to Chengdu, famous for its Sichuan cuisine and pandas, is priced at 1,880 yuan on the official website of the airline. Spring Air has more than 170 domestic routes.

Severely impacted by the COVID-19 outbreak, China's civil aviation sectors have seen the loss of nearly 40 billion yuan in the first quarter. Domestic airlines suffered a total loss of 33.6 billion yuan, according to statistics from the Civil Aviation Administration of China.

Worldwide, the total economic loss of global airlines has reached US$84.3 billion. The expected total revenue in 2020 will be only half of that of 2019, the International Air Transport Association said. More than a dozen of carriers, such as Brazil's LATAM Airlines, have filed for the Chapter 11 bankruptcy.

The year 2020 has been called the "darkest period" for global airlines. They have had to lay off staff or reduce wages, while offering discounts, shifting passenger jets to cargo flights or operating charter flights.

Air Asia  launched the fly-free product in late February. Passengers can pay US$118 to fly from Kuala Lumpur to Australia, Japan, India and several other designated destinations. 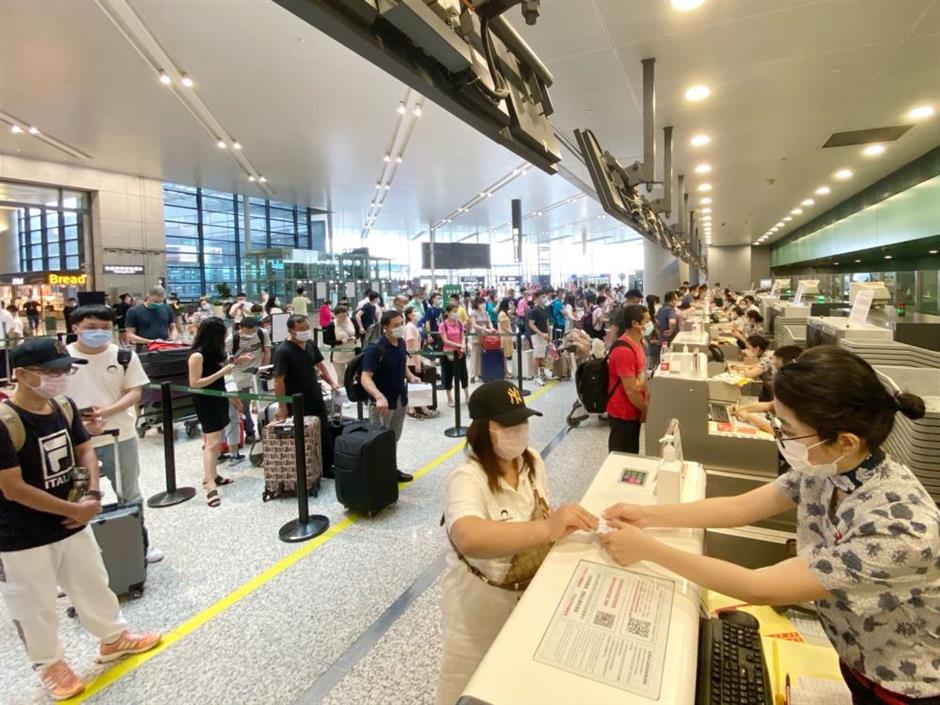 Hongqiao airport is busy on June 28, the first weekend after China Eastern launched its fly-free package.

China Eastern's package sold at 3,322 yuan allows travelers to fly free only on weekends through the end of the year. It was so popular the carrier halted the "first phase" of sales on June 30 when the sales had "reached its plan."

More than 65,000 tickets had been exchanged on the first weekend of June 27 and 28, which coincided with China's Dragon Boat Festival holiday. The load factor of some popular routes is above 90 percent, comparing the average load factor in May at 65 percent.

Peng Guoxing, one of the first batch of buyers and the boss of the popular Dragon Restaurant in Sanya, south Hainan Province, said the package makes him able to "take care of both of his business and family."

He often needs to travel between Sanya and Shanghai.

"It not only meets the demands of frequent business travelers like me, but will also boost the nation's tourism business," Peng said.

The popular fly-free package has even boosted the rebound of passenger numbers at Shanghai's Hongqiao International Airport. Since July, some 87,000 passengers are being handled every day at the airport, almost the same as that of 2019, the Shanghai Airport Authority said.

Other carriers, including Hainan and China Express, soon followed their competitors with fly-free packs priced around 3,000 yuan.

Hainan Airlines allows customers to exchange at most 20 tickets for each domestic route. They are allowed to travel every day, except the Mid-Autumn and National Day holidays in October.

Lin Zhijie, a civil aviation analyst, recommends those who like traveling to Hainan or shopping at the duty-free shops on the island to choose the package.

"It is a good deal for those who plan to fly at least five times to Hainan," Lin said.

China Express, a regional carrier based in southwest Chongqing, only allows medical workers and the airline's new members to buy the fly-free package which can be used through October 24. The product is more suitable for people living in Chongqing, Lin said. 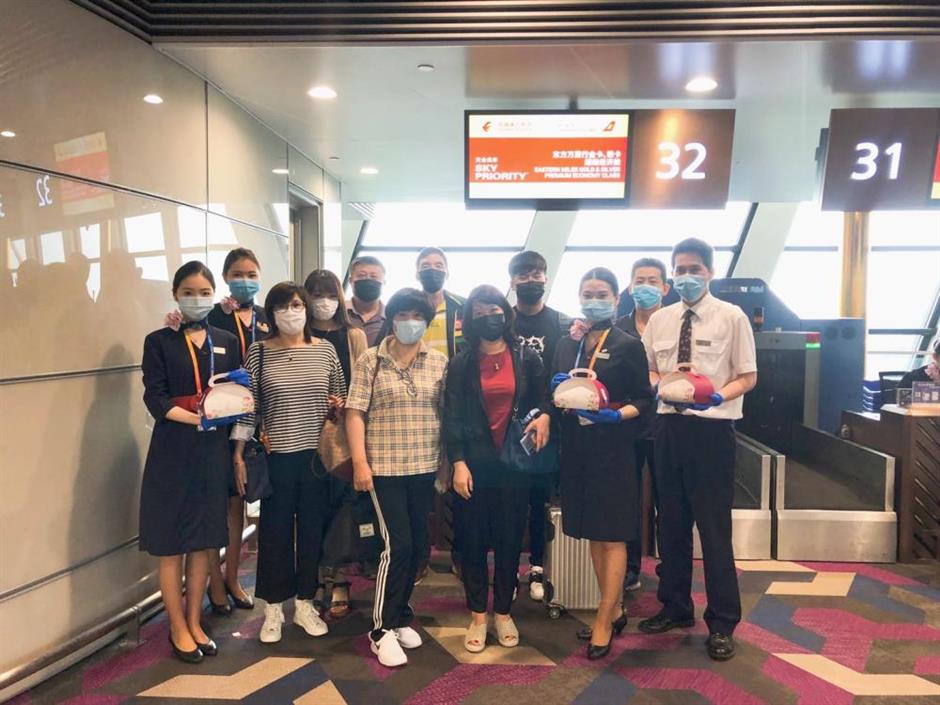 A local Wu family poses with flight attendants. The family purchased eight fly-free packs from China Eastern and fly to Hainan Island together on June 28.

Shanghai-based Juneyao Airlines launched its unique promotion package on Friday, which allows customers an unlimited upgrade to their tickets through the end of 2020 on all Juneyao's domestic routes including Hong Kong, Macau and Taiwan.

More than 60,000 customers have booked the product sold at 888 yuan as of 4pm on Friday, only six hours after sales began. Nearly 2,000 travelers used their newly purchased upgrade card to upgrade their tickets on Friday.

However, there are also some complaints about the conditions the tickets come with.

Some customers complained it was hard to exchange tickets after buying China Eastern's package. The airline's app often showed "sold out," when there were abundant tickets at some third-party platforms.

Furthermore, after the flights were cancelled or delayed, which happens frequently, it was difficult to change to other flights. Many had to cancel the trip planned for the weekend or buy the ticket from other airlines to fly back.

Analyst Lin suggested consumers stay calm and only choose the most suitable product.

"If a traveler bought multiple 'fly free' packages from different airlines, it would be difficult to pay off the cost," Lin said.

Yu Zhanfu, partner and vice president for China at Roland Berger consultancy, asked consumers to remain tolerant because they were the first to try the packages.

"Airlines can make further improvements according to the requirements of travelers and launch better second and third generations of products," Yu said.

Qi Qi, another civil aviation expert, noted the fly free packages are actually the airlines' "helpless choice" to boost the industry with low prices during the difficult period.

"The civil aviation industry can only truly recover when the pandemic is under control and the economy is back on track," he added.