Shanghai police crack down on jaywalking 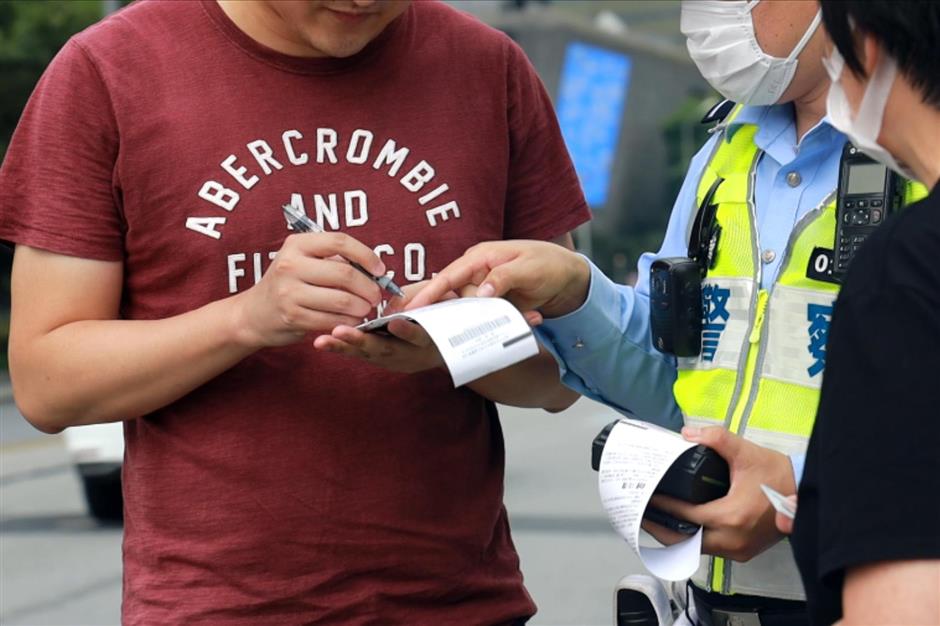 A man is fined by police for jaywalking when crossing Huayuanshiqiao Road between Yincheng Road M. and Dongtai Road in Lujiazui on Monday.

From Monday, police are fining all jaywalkers they spot in Shanghai.

Since 2017, jaywalkers have been educated on the rules if first-time offenders. They received a warning if caught a second time, and fined from the third offense.

But they say fines are no longer a deterrent with a large number of people breaking the rules in the past three years.

According to the rules, pedestrians must cross a street at zebra crossings.

On Monday morning, traffic police in the Pudong New Area stopped over 20 jaywalkers between 10am and 11am on Huayuanshiqiao Road between Yincheng Road M. and Dongtai Road in the Lujiazui business area.

There are no zebra crossings on this part of Huayuanshiqiao Road, about 200 meters in length, and pedestrians are supposed to cross the street at the two intersections at the end of the street. However, many still cross the street in the middle.

Some offenders said that more zebra crossings were needed because it was such a long street.

Police officer Liu Wenxuan said: “Some people walk through red lights because they’re impatient to wait for the lights to turn green, and once one starts, others often would follow.”

Zhu Rongxue, an official in charge of traffic law education, told Shanghai Daily that zebra crossings in the middle of a street, between two intersections, are usually painted in parts where there are a relatively large number of people crossing, such as in front of residential complexes.

At this part of Huayuanshiqiao Road, Zhu said most offenders are people working in two office buildings on the road and tourists.

"There are no residential complexes here, and the street is wide with fast passing cars, which makes it impossible to paint zebra crossings in the middle of it," he said.

Meanwhile, the city has a number of cameras that can identify jaywalkers. Letters of punishment will be sent to offenders after offenses are confirmed by police.

What are the rules? The traffic police explain:

Q: Is it illegal to cross the street in the middle of the road where there are no zebra crossings?

Q: How much is the fine and do I have to pay with cash?

A: In most cases, an offender is fined 20 yuan (US$2.90). But in the cases where the offender crosses the street by climbing over fences in the middle of the street, refuses to be fined or causes traffic accidents, the fine could amount to 50 yuan.

Both cash and payment through Alipay or WeChat are acceptable. There is a QR code on letters sent to offenders for Internet payment.

A: No, you can pay within 15 days from the day you receive the letter of punishment. If you fail to do so, you will have to pay a daily surcharge of 3 percent of the fine beyond the 15 days.

Q: What if I don’t agree with the police decision?

If you dispute the letter of punishment sent to you after you were caught on camera, you can go to the police to see the evidence against you. If you’re still not convinced, then you can seek the above legal remedies. 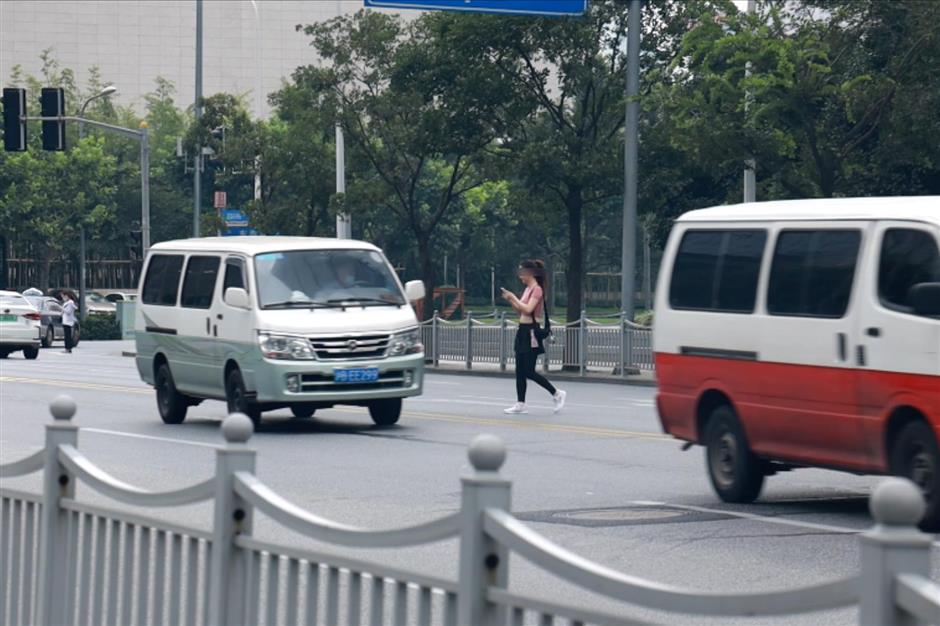 A woman is spotted jaywalking on Huayuanshiqiao Road on Monday morning. 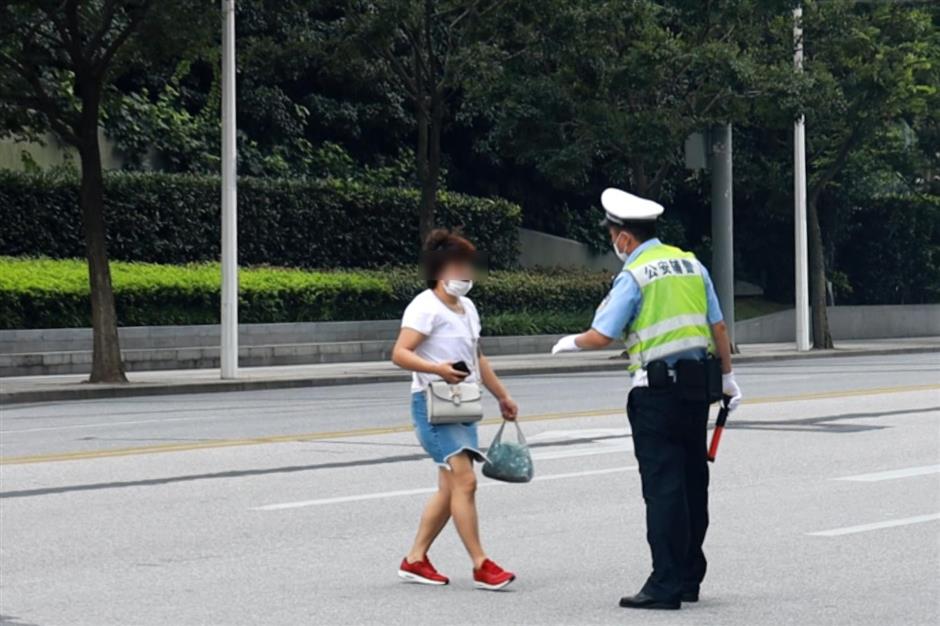 A police assistant stops a jaywalker on Huayuanshiqiao Road. 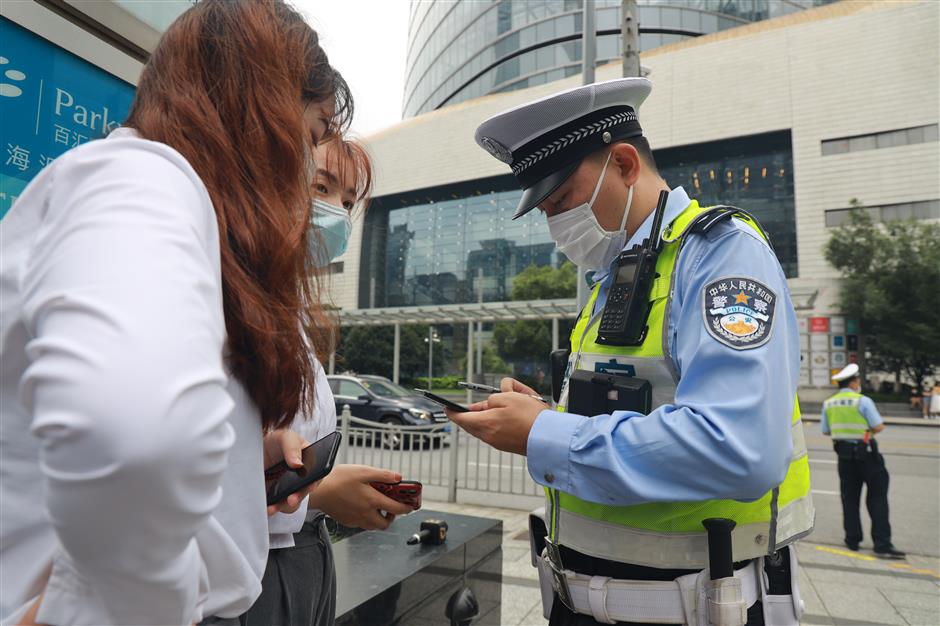 Two women are fined for jaywalking on Huayuanshiqiao Road on Monday morning.