Part of the Nanjing Road Pedestrian Mall extension has opened to the public, with the project to reach to the Bund due to be completed in September.

It is part of the Huangpu District government's efforts to create a world-beating commercial district with global influence and contribute to the city's ambition to highlight its shopping brand, Gao Yun, Huangpu’s Party secretary told a press conference on Tuesday.

A series of press conferences is being held through the end of September featuring top officials from the city's 16 districts introducing their developments.

Apart from the pedestrian mall, facelifts and upgrading are underway in other key business districts such as Huaihai Road and Yuyuan Garden Malls in Huangpu, Gao said.

Nanjing Road E., originally built in 1851 as one of the city’s first modern roads, is being extended eastward to the Bund from its current end at Henan Road M. to accommodate a growing number of visitors in the future.

The street currently stretches 1,033 meters between Xizang and Henan roads. Half of the pavement on the 500-meter extension has been completed, with people now able to walk from Xizang Road M. to the Bund without interference from vehicles.

New greenery, small gardens, additional garbage bins and specially designed benches will be installed along the extension, while new illuminations will light buildings on both sides, including the Peace Hotel.

Chao Kejian, director of Huangpu, told the press conference that businesses along the road will also be upgraded to attract world famous brands to open stores.

"The pedestrian street attracts over 150 million visitors annually, who consume some 18 billion yuan (US$ 2.56 billion), which means average spending is only 100 yuan per person," Chao said. The extension and business upgrading are expected to boost consumption and drive the city's economic development, he added.

In one eye-catching project, Huawei has opened its biggest flagship store at the beginning of the new extension, showcasing its products and latest 5G technology applications.

The 5,000-square-meter store with 220 full-time staff is in a building built in 1935 by Silas Aaron Hardoon, a British real estate tycoon. Huawei says it hopes it will become a place where people can have fun, learn, share and innovate.

"Huangpu has attracted 216 flagship or first stores of international brands, such as Nike and M&M's," Gao said.

Peet's Coffee, for example, founded in 1966 in Berkeley, California, opened a new store at The Central, a new commercial project near Nanjing Road E. developed from four buildings — Central Mansion, Meilun Building, Xinkang Building and Huaqiao Building — dating from 1924 to 1930. The grand opening in May attracted a long line of customers.

Gao said department stores in Huangpu had seen total sales triple in May, a sign that the city was returning to normal following the COVID-19 outbreak. 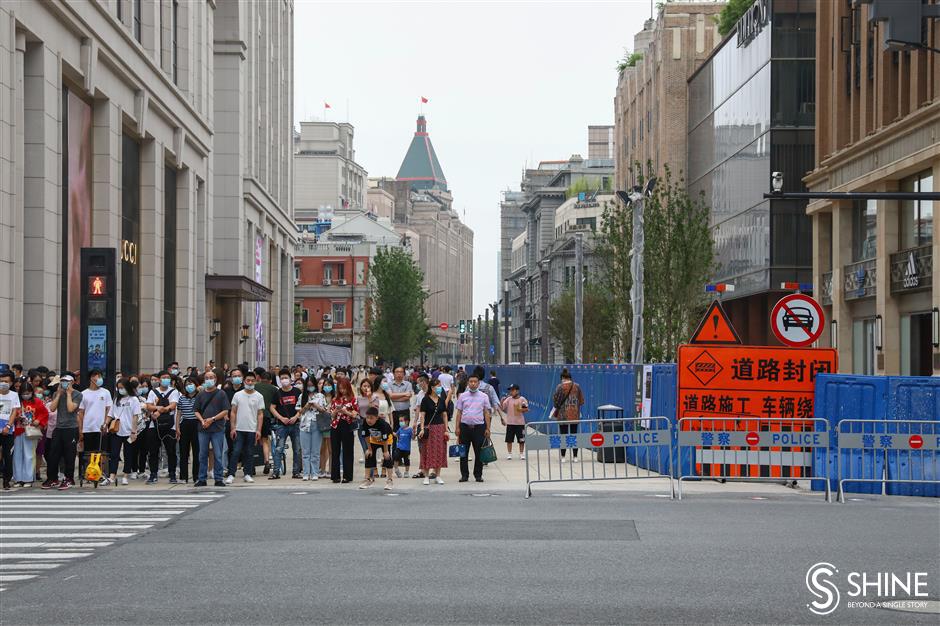 More cultural and tourism events will be held in the shopping complexes to further drive consumption, Chao said. Intelligent technologies will be used to allow consumers to experience the latest 5G, artificial intelligence and virtual reality technologies.

A big data analysis system on Nanjing Road E. shows that 36 percent of the consumers are in their 20s, spending about 28 minutes on the road. Some 6 percent of visitors go to Yuyuan Garden from the pedestrian street.

Chao said the landmark Century Plaza in the middle of the pedestrian mall will undergo a major renovation by the end of the year for international brands to launch new products and become a popular wanghong (online celebrity) site.

"The renovation blueprint has been changed repeatedly to make it on a par with Times Square in Manhattan," Chao added.

Nanjing Road was constructed in 1851 as Park Lane from the Bund to a race track on today’s Henan Road. It was extended to Zhejiang Road in 1854 before being further stretched to Xizang Road in 1862. Nanjing Road E. was converted to a pedestrian street and unveiled to the public on the evening of September 20, 1999, when it quickly became an attraction for tourists and local residents alike.

Last year, the walking street was listed by the Ministry of Commerce as one of China's first batch of pedestrian roads to receive high-quality, tasteful renovations and improvements. The entire road is now covered by 5G, the next generation of mobile communication technology, a key factor in its future development.

By the end of 2019, the gross regional domestic product of Huangpu reached 258 billion yuan, double that of 2010. Every kilometer of land in Huangpu generated 12.6 billion yuan, ranked the first among local districts, Gao said. 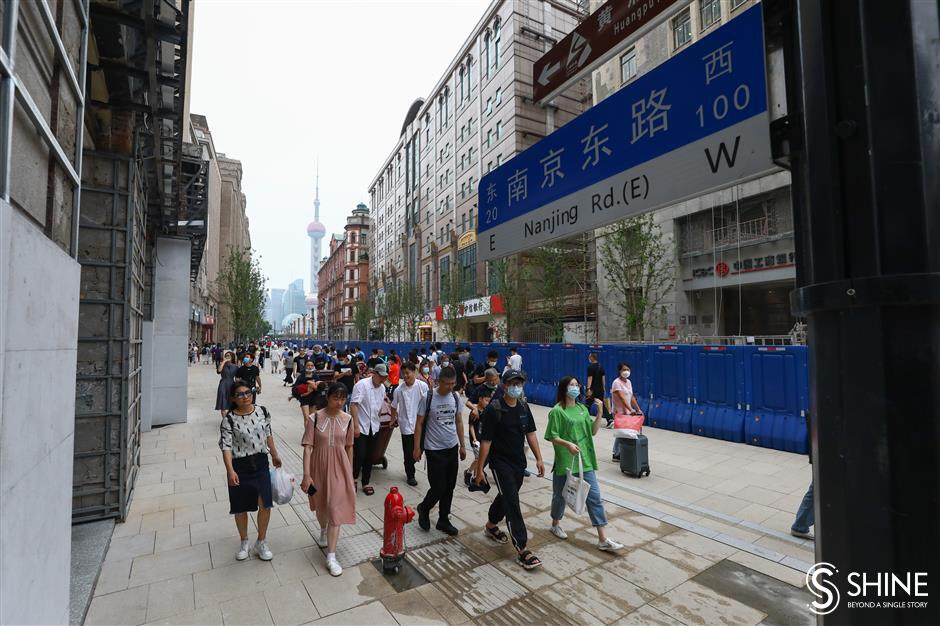 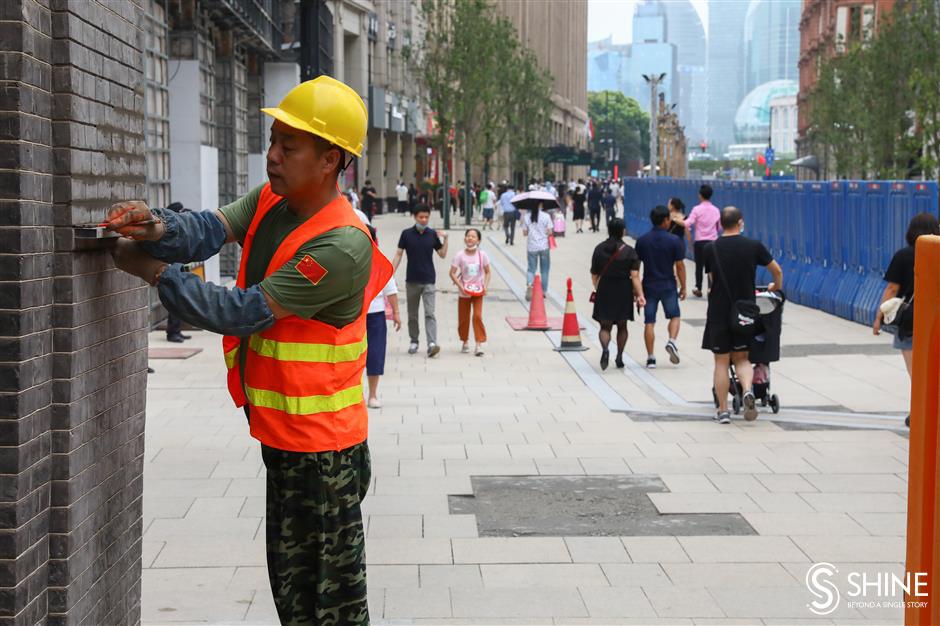 A worker refurbishes a historical building on the extension of Nanjing Road Pedestrian Mall. 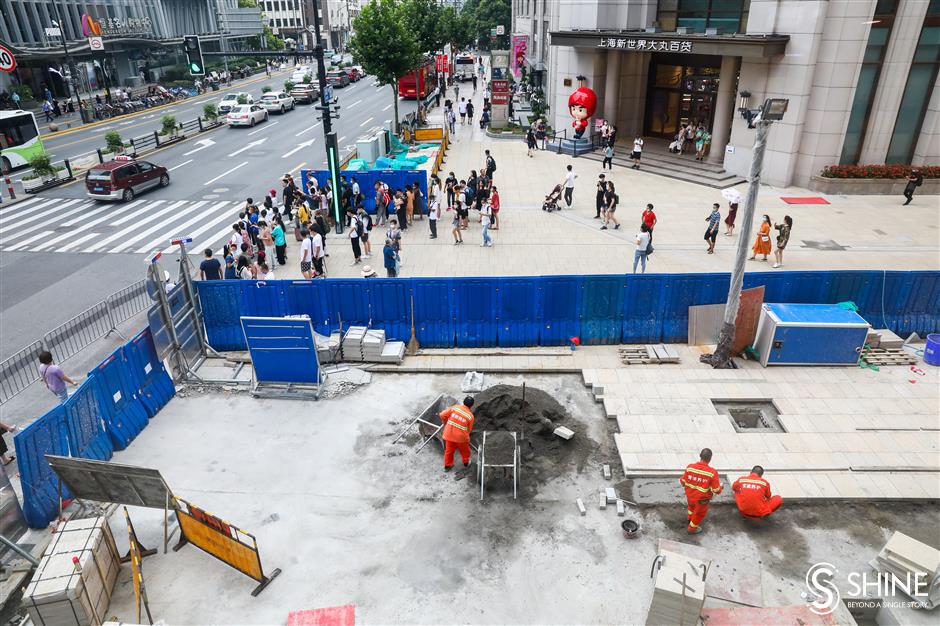 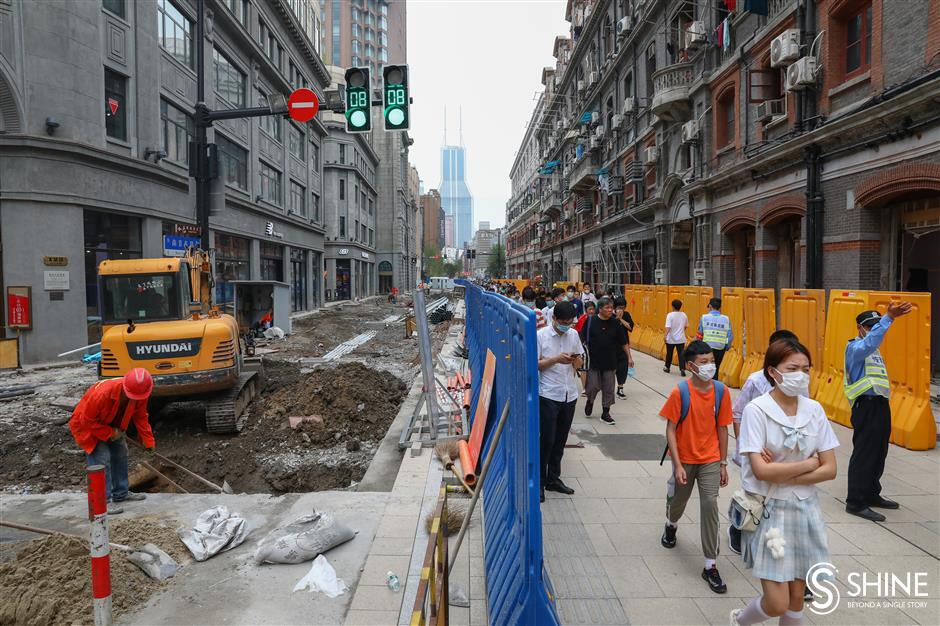 Part of the Nanjing Road Pedestrian Mall is still under construction.