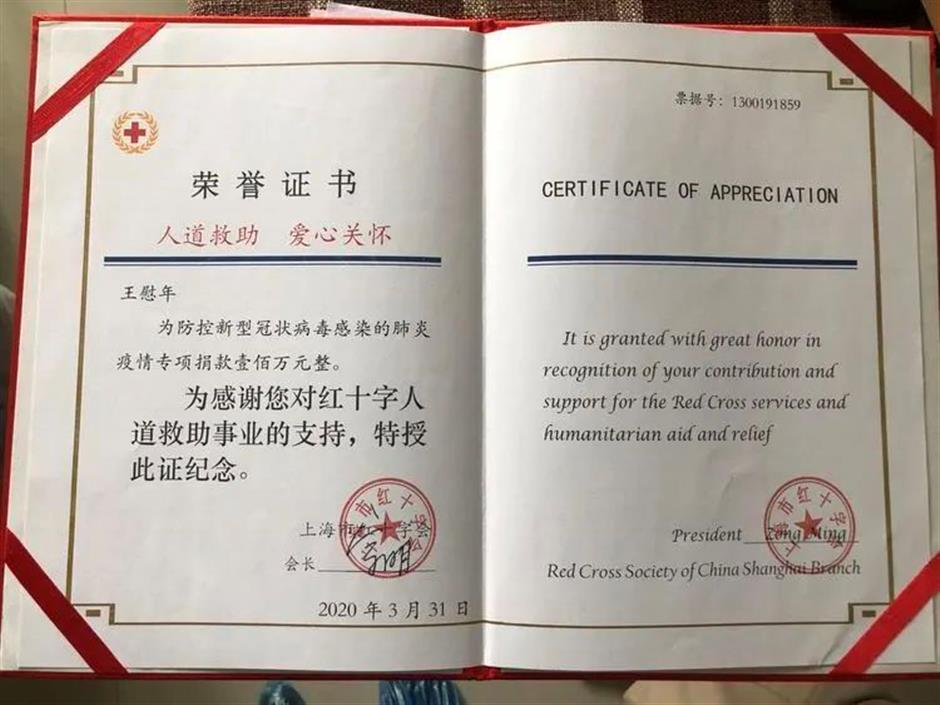 A certificate granted to Wang Weinian for his charity deed

An 84-year-old man in Songjiang District has been recommended for a China Charity Award by the Red Cross Society of China Shanghai Branch after donating 1 million yuan (US$141,395) to support the country’s coronavirus pandemic prevention and control.

Wang Weinian, a retired medical professional, lives in the Jiuliting Community’s Aoyuan Neighborhood. He and his family have been closely watching the development of the pandemic since it broke out in the central city of Wuhan in January.

Wang saw batch after batch of Shanghai medical workers leave to join the battle in Wuhan and felt moved by their sacrifice and wanted to use his savings to support them.

Then he reached an agreement with his family members and donated the money.

“My wife and I love our country. We saved some money through honest income and would like to donate it to our country and society,” Wang told the Red Cross.

A graduate of the Shanghai No. 1 Medical College (now Shanghai Medical College of Fudan University), Wang furthered his studies and has worked in clinical medicine practice and research in Germany since 1979. After his retirement at the age of 63, he opened a clinic in Germany and would return to Songjiang to live in his hometown for seven or eight months.

A thrifty person, Wang still drove a second-hand car he bought in the 1990s.