New look for old bridge as lights are turned on 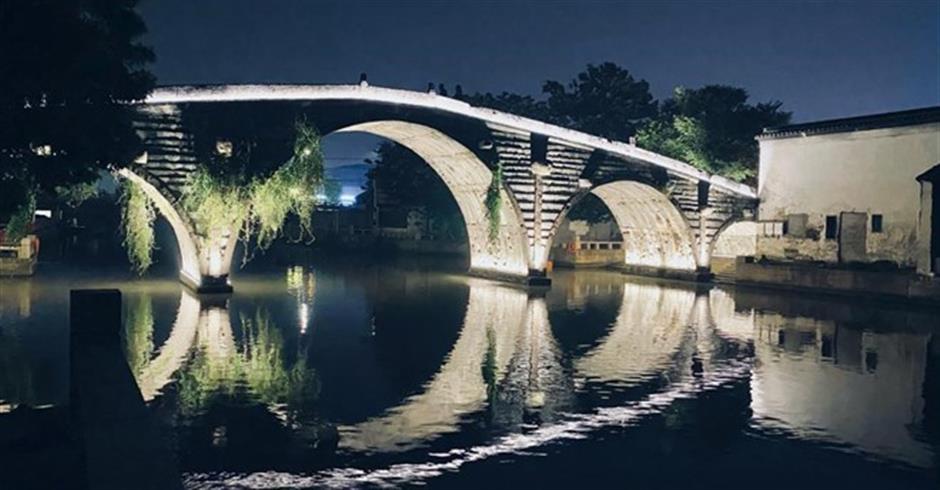 Landscape lighting on Songjiang’s Dacang Bridge was turned on for the first time on May 28 and will continue to be illuminated from 7pm to 11pm every day.

At 7pm on May 28 lamps on the bridge railings and at its base slowly lit up, transforming the bridge into a new look under the yellowish light. Under the curtain of the night, the light and its reflection looked especially elegant, attracting a number of people to stop and take photographs of it.

Two rows of LED light bars about 120 meters in length have been installed on both sides of the bridge, with wall washers and 10 floodlights installed on the arch and the piers, respectively. To protect the bridge, engineers didn’t use a single nail in the entire lighting project.

“Lots of memories are related with the bridge. In our childhood, rice firms, shops selling sauce and pickles and various stores were located on the banks of the bridge, with boats traveling to and fro the river,” said an elderly Songjiang resident.

“The landscape lighting offers residents and tourists a brand-new experience. The district also plans to renovate other historic houses and blocks,” said an official of the Yongfeng Community where the bridge is located.

The Dacang Bridge, built during the Ming Dynasty (1368-1644), got its name because a grain storehouse used for water transport of grain to capital city in ancient China was located south of it.