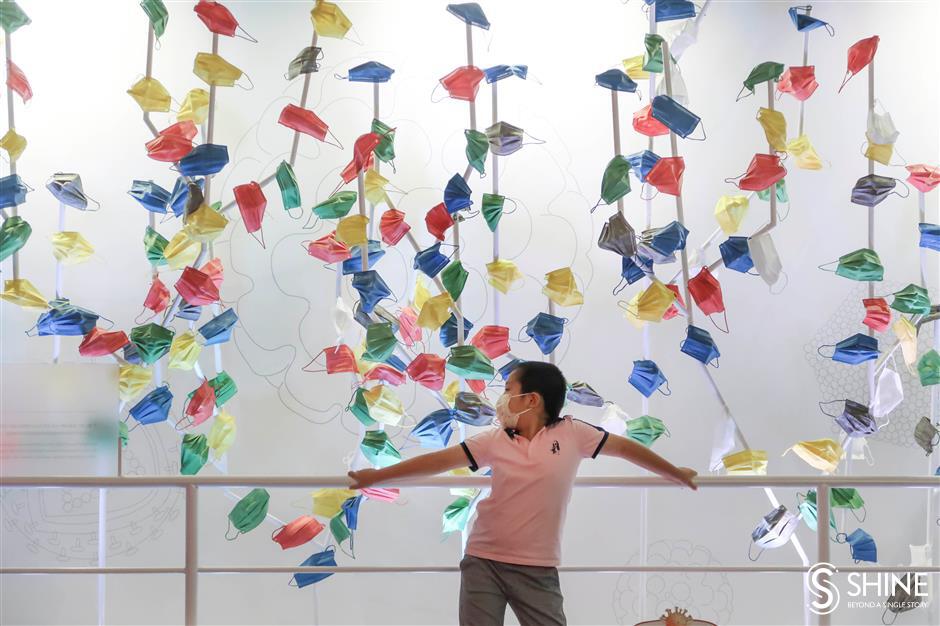 A boy stands in front of an art installation called Magic Mask Forest. 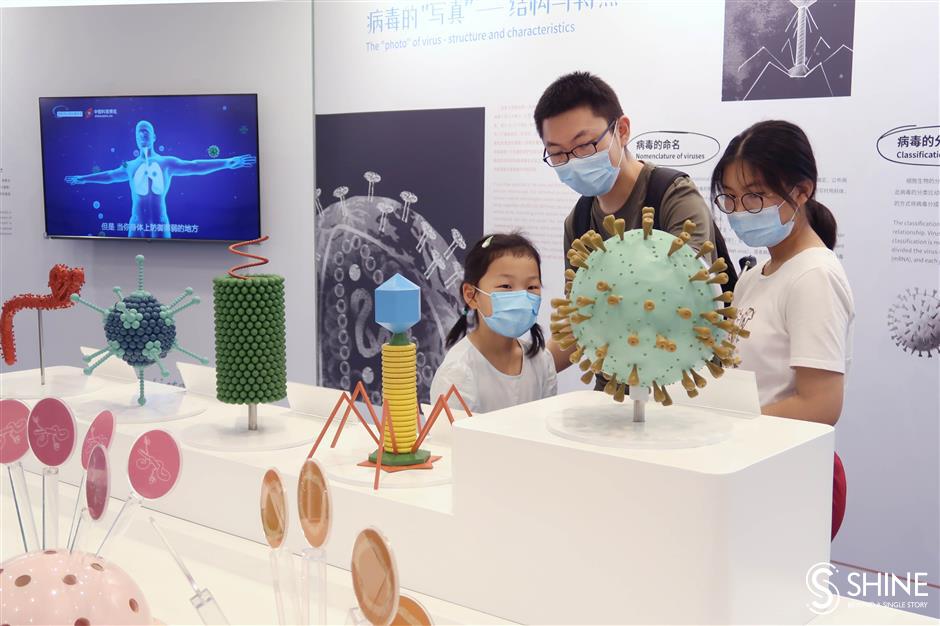 Virus structure models are on display. 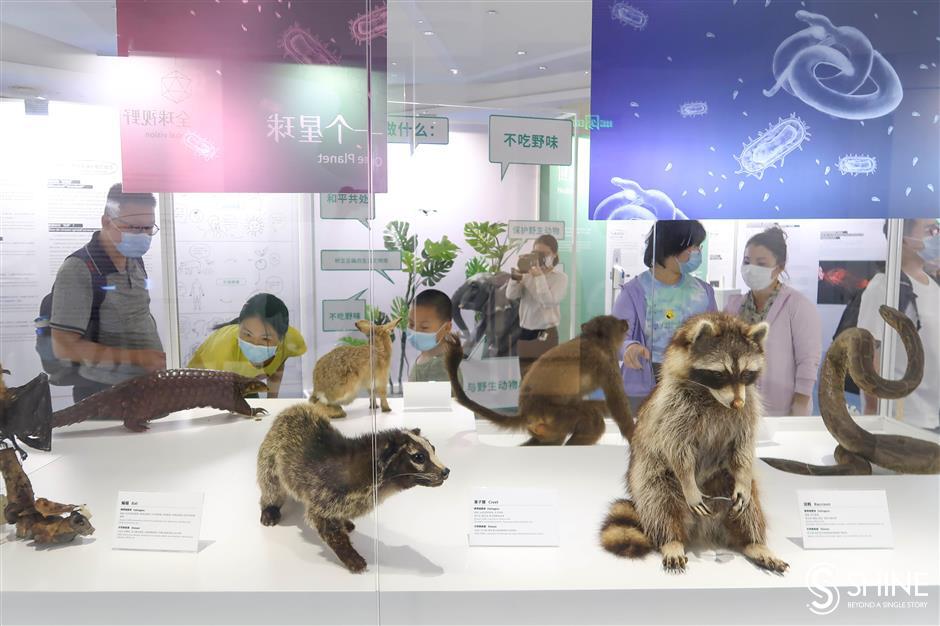 Animal specimens are on show, along with information about which viruses they carry.

COVID-19 caught the world off guard, yet accelerated progress in health. An exhibition about the love-hate relationship with viruses opened at the Shanghai Science and Technology Museum on Wednesday.

Text, graphics, videos and models, explain the essence of viruses and tell the history of our fight against pandemics. Interactive games and art installations inspire people to think about proper co-existence with viruses.

Special exhibits, such as nuclear acid test equipment, passes to gain access to neighborhoods and paintings drawn by children to cheer up front-line medics, remind people of the hard times just gone through.

One highlight of the exhibition is an art installation made of colorful masks to indicate masks providing a haven free from infection.

The public had never valued masks as much as they do today after the first surgical mask was invented in 1895. Masks have become a symbol and a necessity in the COVID-19 pandemic, according to artists from he China Academy of Art.

The exhibition will run for four months. Some of the exhibits will also be displayed at the third China International Import Expo.

Viruses survive through replicating inside living cells, and can infect all types of life forms including plants, animals and humans. They are hard to kill, according to the exhibition.

Considered the most abundant biological entities on Earth, viruses are everywhere, according to the exhibition.

The world’s oceans contain a massive amount, including many still unknown to us. Some 200 liters of seawater can contain 5,000 viruses with different genetic backgrounds, and there could be a million in every kilogram of marine sediment.

Even in extreme conditions, viruses survive. They are found in lakes beneath Antarctica and in cactuses in deserts.

According to the exhibition, human activity has close ties with the spread of viruses.

Around 9500 BC, with the domestication and cultivation of plants, the sobemovirus genus of viruses started to spread. Around 8000 BC, humans around the Mediterranean basin began to domesticate wild animals, and animal diseases spreading to humans increased.

New viruses keep emerging and they transmit faster than ever due to urbanization and globalization. It’s of vital important to not eat wild animals and to protect ecosystems, according to the exhibition.

Animal specimens are on show at the exhibition to demonstrate how dangerous wild animals can be.

However, effective counterattacks have been launched in the past century, the exhibition shows.

In 1935, American biochemist and Nobel laureate Wendell Stanley’s work on the tobacco mosaic virus led to a great leap toward in the understanding of viruses.

However, viruses can also be used in biological control to kill pests and in genetic engineering for precision medicine, according to the exhibition. 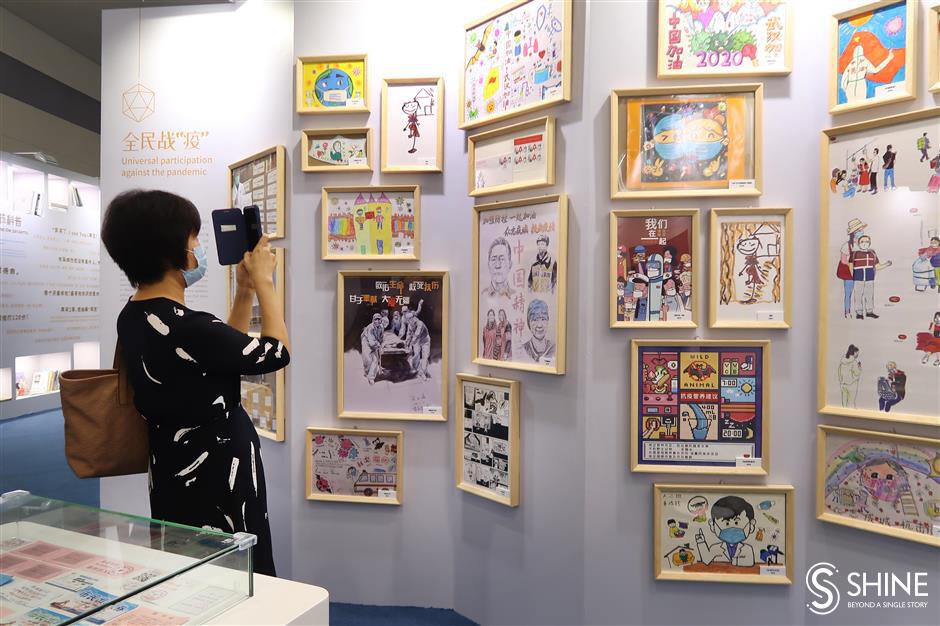 A woman takes a photo of paintings drawn during the pandemic to cheer up front-line medics.