Activities to celebrate World Youth Skills Day and promote the 46th WorldSkills Competition in Shanghai in September next year were held in the city on Wednesday.

The day highlights the importance of youth skills development and its role in social and economic growth and has been observed every year since the United Nations General Assembly declared July 15 as World Youth Skills Day in 2014.

This year’s celebrations featured promotions for next year’s event to attract more young people to develop a passion for skills.

On Tuesday evening, landmark buildings in Lujiazui were illuminated with competition mascots and slogans along with information about World Youth Skills Day.

On Wednesday, a skills fair was organized at the China (Shanghai) Entrepreneurs Public Training Base in Yangpu District where 15 masters demonstrated their prowess in activities ranging from making small steamed buns and painting ink sticks to operating robots and decorating cakes. Visitors were invited to try their hand.

Students were offered the chance to learn about making thumb pianos and model vehicles. 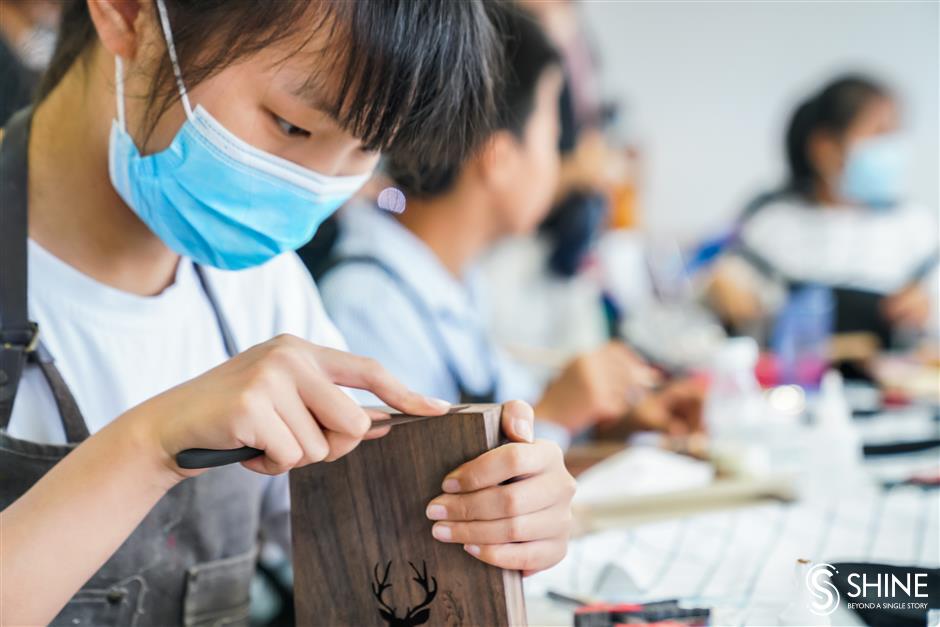 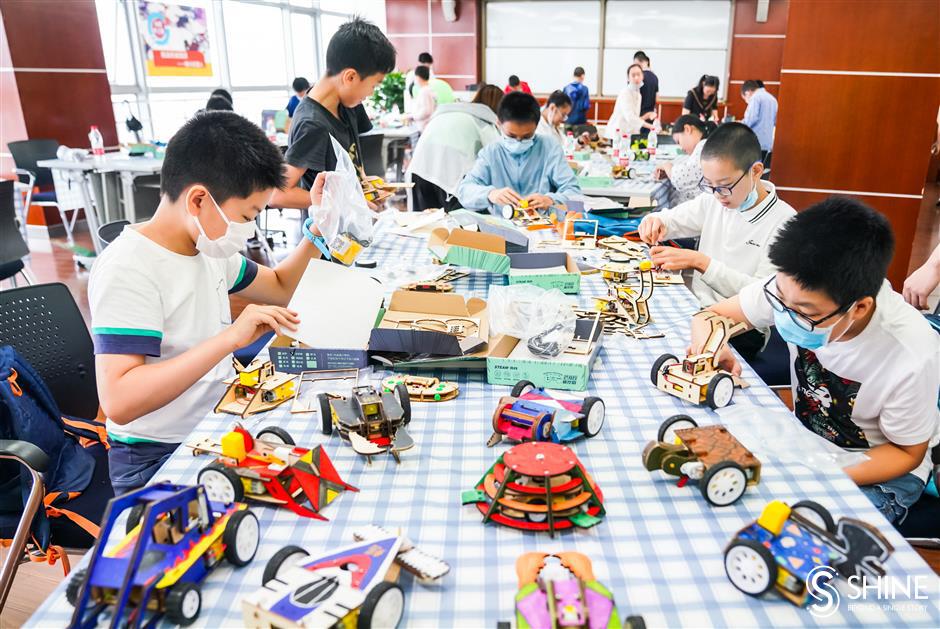 Students learn how to design and make model vehicles.

Peng Chenlei, vice mayor of Shanghai, announced the launch of the 2020 vocational skills competition in Shanghai.

According to the organizing committee, this year’s competition will serve both Shanghai’s development strategies and preparation for next year’s 46th WorldSkills Competition.

As Shanghai is promoting its manufacturing, services, culture and shopping brands, a contest will be held in December in the four areas according to WorldSkills Competition rules.

To serve the city’s efforts in developing a scientific and technological innovation center of global influence, more than 60 government organizations, enterprises and industrial associations are holding some 500 skills competitions around the city from July to the end of year.

Next month, Shanghai is sending people to a skills competition on the theme of poverty alleviation in Datong in Shanxi Province. In December, it will attend China’s national first vocational skills competition in Guangzhou in Guangdong Province, which will include 63 skill categories in the 45th WorldSkills Competition.

An artisanship relay kicked off in Shanghai on Wednesday to mark the World Youth Skills Day and prepare for the opening of the WorldSkills Museum in September next year during the 46th WorldSkills Competition.

The museum is being built by China’s Ministry of Human Resources and Social Security, the Shanghai government and WorldSkills International.

The relay started from Yangpu District, the cradle of China’s modern industry and where the museum is to be built. It will go to skills landmarks in Shanghai, China and around the world.

Zhao Zhuping, vice secretary-general of the Shanghai government, handed over a large model of a bus key, a token of the relay, to the museum on Wednesday. 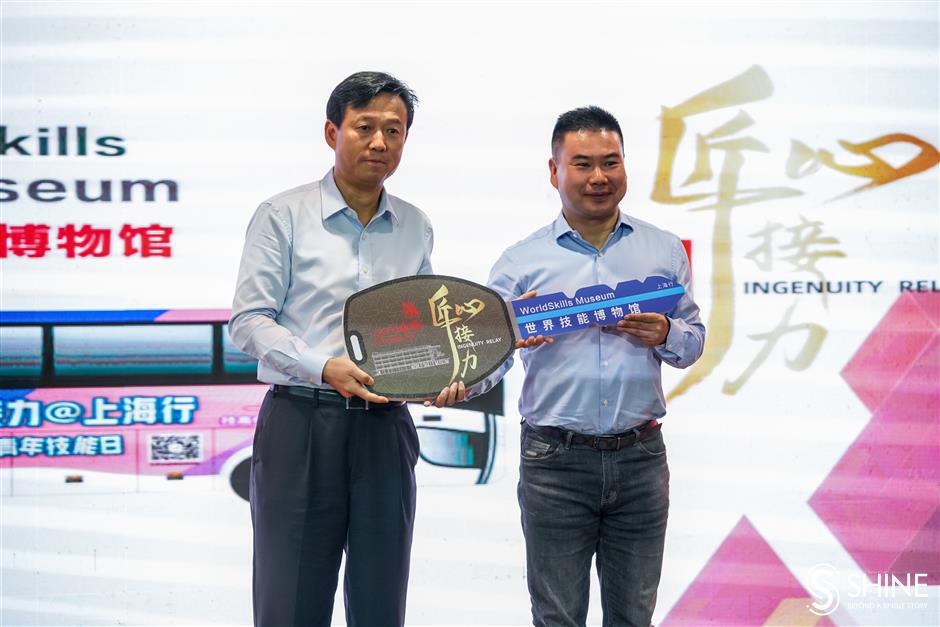 Zhao Zhuping (left), vice secretary-general of the Shanghai government, presents a large bus key model, a token of the artisanship relay, to the WorldSkills Museum.

The museum received other exhibits during the relay launching ceremony, including a crystal sculpture made especially for it and a championship medal from a World Skills Competition.

The crystal sculpture was created based on an octagonal prism concrete reinforcing bar that was used in building the Wing On Warehouse, which is being developed into the WorldSkills Museum.

The sculpture is 66 centimeter long, with a 46-centimeter concrete reinforcing bar at its core and the number “2021” on top to wish success for next year’s competition. 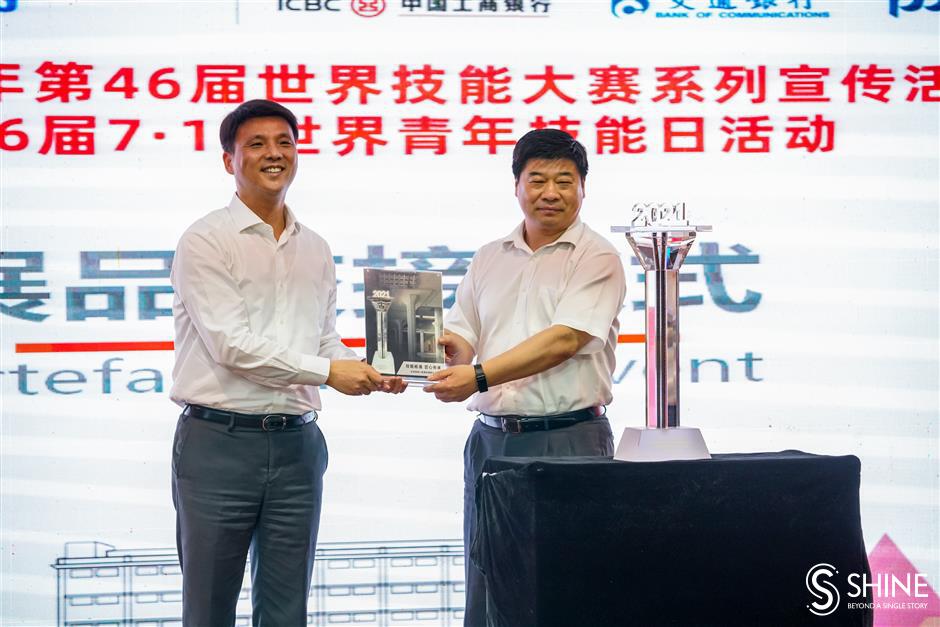 A specially made crystal sculpture is presented to the WorldSkills Museum.

The medal was given by Xu Aomen, champion of auto-body repair at the 45th WorldSkills Competition in Kazan, Russia, in 2019.

“I decided to donate my medal to the museum immediately after I got to know that it was seeking exhibits,” said Xu. “If I keep it for myself, it can only be put in a cabinet at home. But if it can be displayed at the museum, more people will see it and I will feel proud of that. And also, I hope it can inspire more young people to develop a passion in skills and purse excellence by hard work.”

Xu, 21, said he decided to learn auto-body repair at Yangpu Vocational and Technical School when he graduated from middle school after he heard the story of how Luo Liang, a former student of the school, had won a silver medal in the 43rd World Skill Competition.

By the end of June the museum had received more than 4,000 exhibits, now being assessed by experts. It is continuing to seek items from around the world. 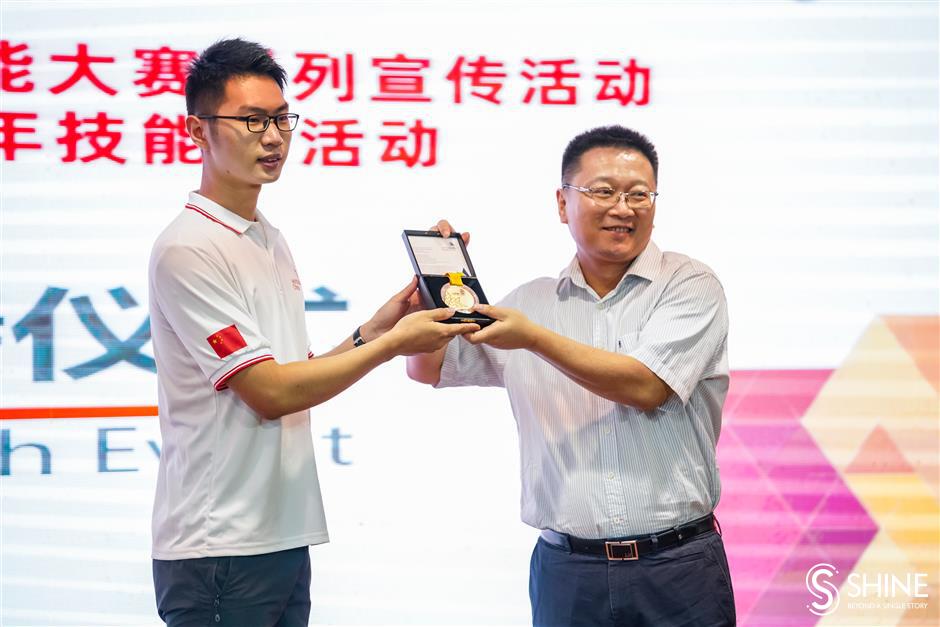 Xu Aomen, auto-body repair champion at the 45th WorldSkills Competition, donates his medal to the museum.

Videos of between 30 seconds to 4 minutes long are being sought with content ranging from skills categories in the competition or which promote next year’s competition.

Works should be submitted to info@shvfs.cn before October 15 and winners will be announced in November.

Winning videos will be shown online and on the WorldSkills Competition Shanghai 2021 website. They will also feature at the Shanghai International Film Festival. 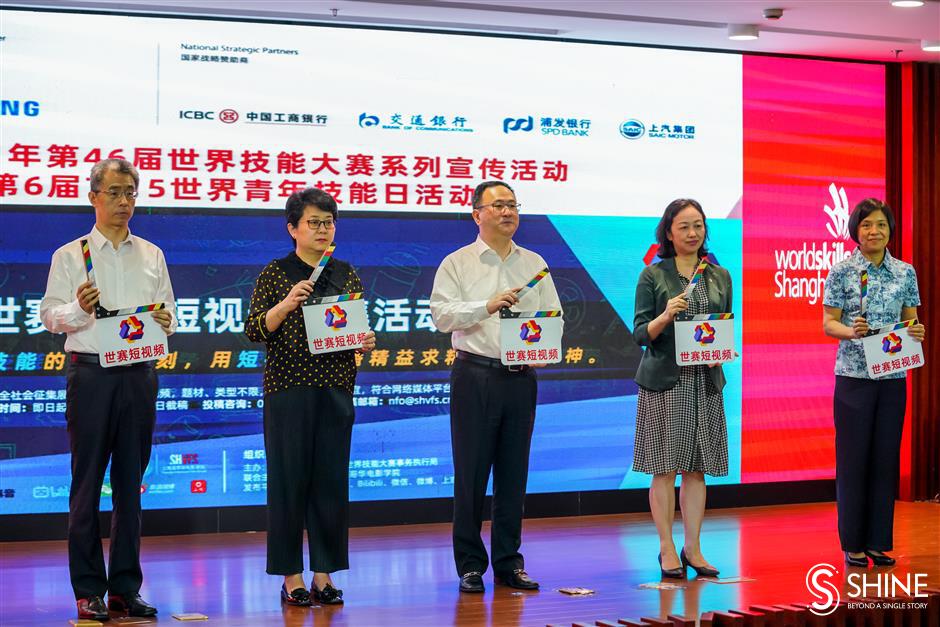 A competition for short videos on theme of the WorldSkills Competition is launched on Wednesday.