No more leaky pipes, no more punishing stairs to climb

Living in old residential buildings in Shanghai can be a test of endurance, especially when apartments leak, staircases are the only way up, medical care is inconvenient and community services are sparse.

A community in Changning District has finally solved all those problems for once and for all, using artificial intelligence technologies to create a model for residential rehabilitation.

At the No. 6 Xinjing Community, six new elevators have been installed, with another on the way. They will be especially beneficial to the 1,000 elderly residents who comprise half the occupancies and can’t navigate stairs easily, if at all.

Rusty sewage pipelines have been replaced by PVC pipes, ending problems of leakage that often led to disputes among neighbors.

A three-story activity center has been built in the middle of the neighborhood, featuring the newest artificial intelligence applications, including self-service machines that allow residents to handle hundreds of banking, permit and other transactions.

"I feel like I am living in a brand-new community,” said Sun Jihong, 72, who has been in the complex since it was built over two decades ago. “Life here gets better by the day."

Sun recalled the environment when she moved in. Roads were narrow, the atmosphere was dreary and life was inconvenient. Due to a broken sewage pipe, the kitchen and wooden floor of her apartment were deluged in 2018.

There are about 220,000 residential buildings in Shanghai that were constructed more than two decades ago. Many of earliest of those were built to house the burgeoning working class in the city, and many older complexes have become outdated.

Nearly 40 percent of people living in the 1 million households lodged in these buildings are 60 years or older, according to the city's housing authority.

The accommodation isn’t as dire as the derelict neighborhoods found in some back lanes. Residents do have separate toilet and kitchen facilities, so they weren’t in line for relocation under urban renewal projects. But that didn’t mean their lives couldn’t be improved. 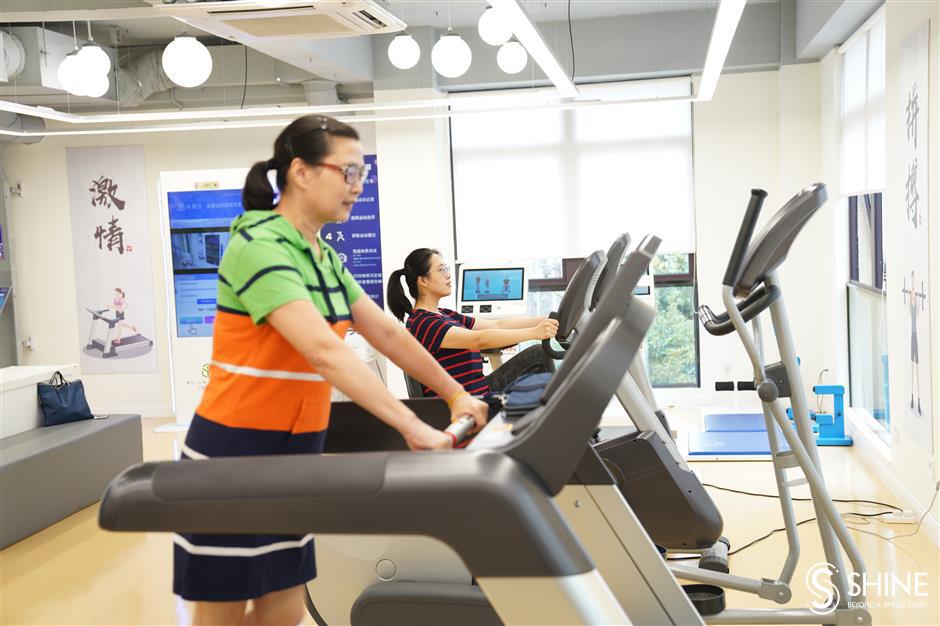 Residents do exercise in a gym equipped with AI technologies at the No. 6 Xinjing Community.

To address this segment of the population, the city government initiated various rehabilitation campaigns. In 2016, it cut red tape in the process of getting approvals to install elevators in old apartment complexes that lacked them.

Artificial intelligence has played a key role in renovation work. Technologies such as facial recognition and Internet of Things have been deployed in the projects to make life easier for residents.

The No. 6 Xinjing Community has become a model of how multiple problems can be addressed effectively and efficiently, according to Li Zhibin, deputy director of Beixinjing Subdistrict.

The community’s new 1,800-square-meter activity center, rebuilt from a former card-playing room two years ago, uses some of the trendiest new technologies. In fact, it was duplicated for an exhibition at the World Artificial Intelligence Conference in 2018.

In the center, residents can receive remote medical diagnosis and buy medicines any time of day.

Shi Hongying, 73, said she used to have to walk 2 kilometers to the nearest community health center to buy her hypertension pills every week. Now she has a video session with her doctor and can pick up a prescription at the center.

Residents scan their fingerprints to buy coffee or other drinks in a shared sitting room, where they can also cook or host banquets for friends or relatives.

Over 300 services are available by just scanning ID cards or smartphones on a self-service machine. The most common transactions are checking the amount deposited in pension accounts, renewing residency permits and printing out medical records.

Touch screens at a small public library on the second floor give residents access to tens of thousands of books. They can scan a QR code to read selected books on their phones or rent an e-ink reader free.

The community’s gym has become the most popular site for young residents. There, too, artificial intelligence plays a big role.

A digital system can check a user’s medical records and recommend the most suitable fitness equipment. While exercising, a user’s heartbeat and other vital data are collected and sent to a medical room downstairs.

"More AI companies are voluntarily bringing their latest applications to the activity center to display their products to the residents," Li said. 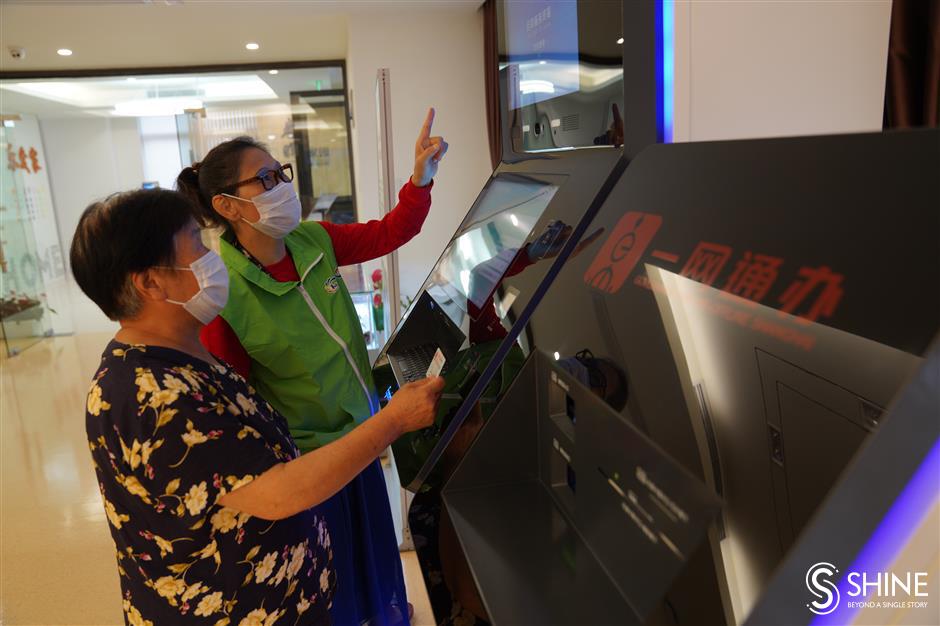 A senior resident scans her ID card on a self-service machine that allows residents to handle hundreds of banking, permit and other transactions.

The big makeover of the community started in 2018 when sewage pipes in every household were replaced, Li said. Workers had to break through floors and walls to replace the rusty pipes. If even one resident balked, the project for that whole building had to be put on hold.

Among the 63 disputes mediated at the community in 2018, leakage accounted for over 90 percent, so the subdistrict was determined to finish the project, Li said.

To persuade the residents to get on board with the project, the neighborhood committee displayed a piece of dismantled pipe, which was rusty and cracked, to show residents why new pipes were needed. In fact, the old pipe segment is still displayed in the activity center.

During the project, many mobile toilets were set up in the community while pipes in bathrooms were being replaced. The Changning District government covered all the costs and ensured that all home interiors were restored to their original look when the work was done.

The number of complaints about leakage fell to zero his year.

Pipe replacement was followed by the elevator installation project.

The subdistrict used the same strategy. The first two elevators were opened so residents in all buildings could ride them. That convinced any recalcitrant resident to sign up for a new elevator in their building. The project requires at least two-thirds of approvals from residents since they have to bear part of the cost.

Xu Xianneng, an 80-year-old who lives alone, can now go downstairs in a wheelchair without the help of others.

There are 10 newly installed elevators within the jurisdiction of the subdistrict, and installation of another four is underway.

Li said the rehabilitation of the community is being promoted to other areas of the city, where valuable experience can be shared. 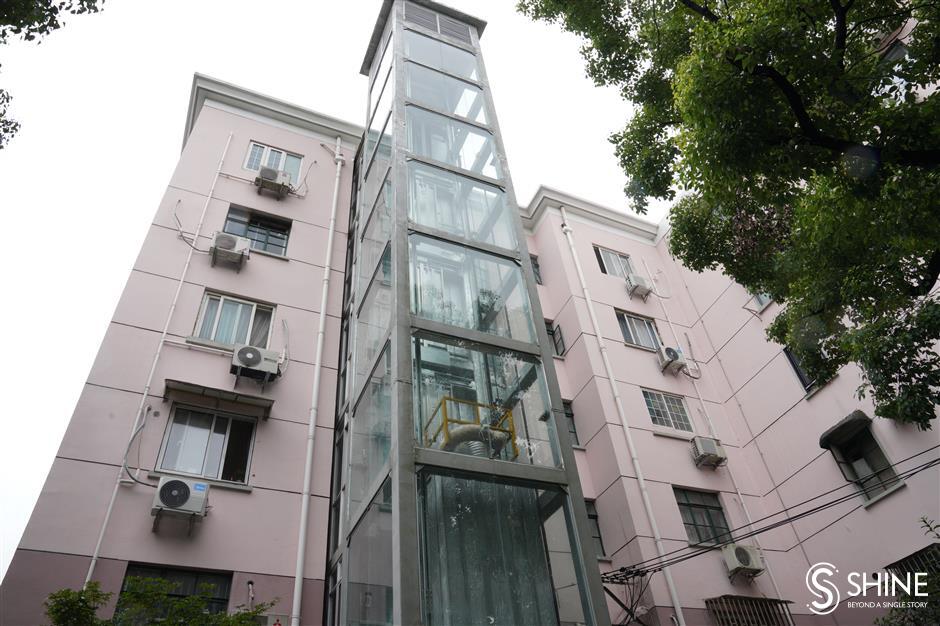 A newly installed elevator at the No. 6 Xinjing Community