Fan, the 53-year-old patient, was found to have nodules on both breasts during a health check. She had underdone breast nodule surgery some years ago and was admitted to Yueyang for the same procedure.

However, checks there also revealed she had a nodule on her lung.

Doctors suspected lung cancer and advised both surgeries as soon as possible.

Fan was anxious about anesthesia, as she had suffered serious complications, including nausea, dizziness and vomiting, after her previous operation.

“I spent a long time in bed to recover from the surgery and I worry about the possible influence on my body of two major surgeries in a short period of time,” she said.

Doctors decided to use acupuncture.

Acupuncture anesthesia is considered an effective replacement or supplement to conventional methods. Doctors said that using acupuncture could reduce the use of anesthetic by up to 70 percent to protect organs, reduce complications and enhance recovery.

During surgery, doctors made three small cuts (3 centimeters each) to the patient’s chest and breasts. They used 30 percent of the anesthetic they would normally use.

Fan was able to walk unaided from the intensive care unit to her ward 24 hours after surgery and she was discharged five days later.

Dr Zhou Jia, president of Yueyang and an expert on acupuncture anesthesia, said enhanced recovery after surgery, or ERAS, focuses on quicker and better recovery while ensuring safety and quality of surgery.

“We are studying tubeless surgery under the support of acupuncture anesthesia. Tubeless surgery means that we avoid or reduce the use of the various tubes before, during and after surgery to reduce damage and infection risks from the tubes and enhance quicker recovery,” he said. “It is also a super minimally invasive surgery. Acupuncture anesthesia is an important method to help us reduce the use of tubes." 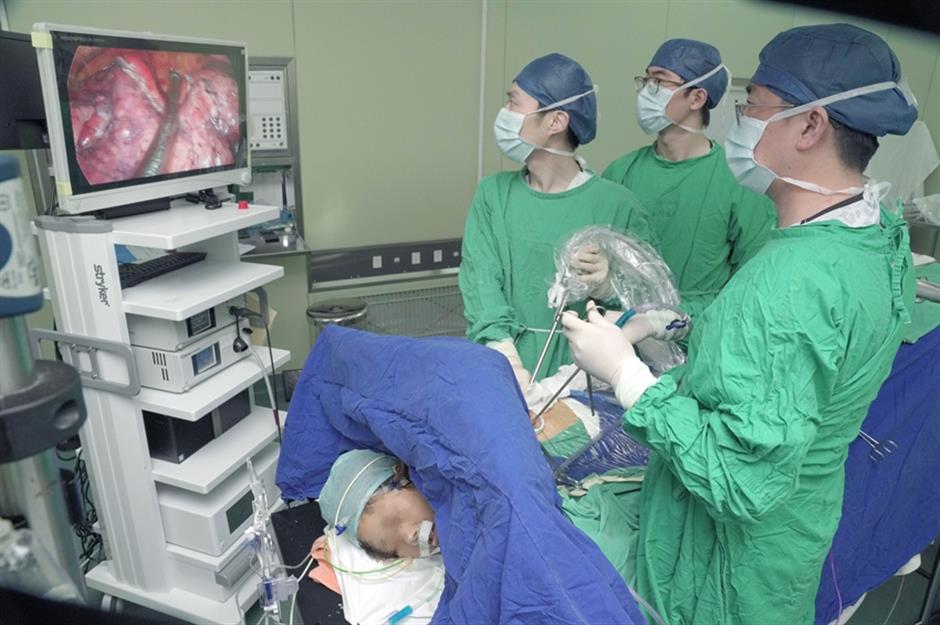 Doctors in the minimally invasive surgery through acupuncture anesthesia.