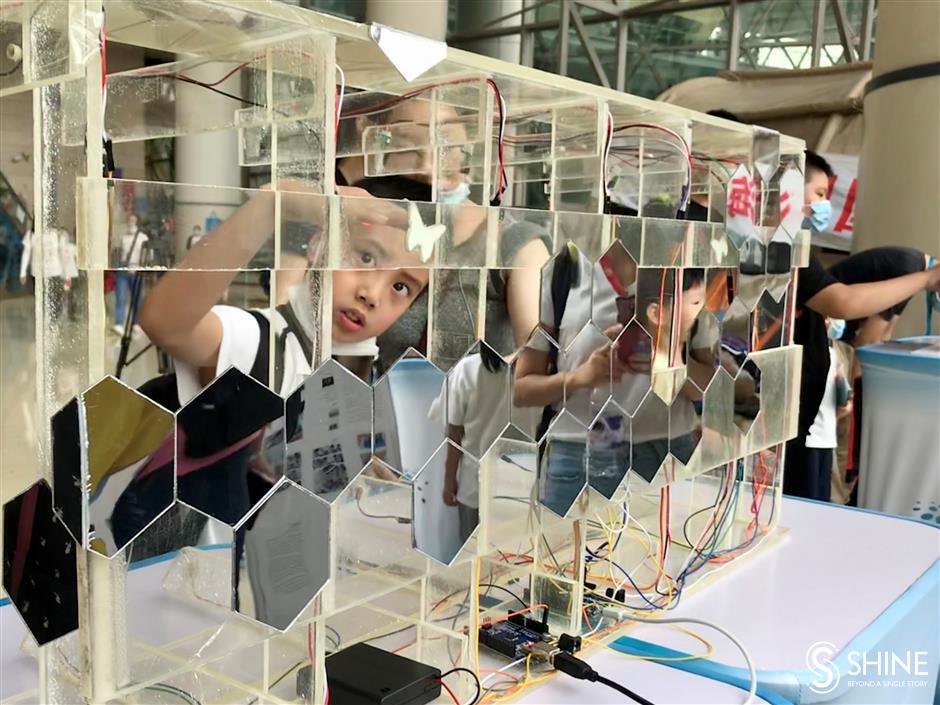 A boy looks at a version of a laser harp designed by local students.

The city’s budding inventors are using their talents to help their poverty-stricken peers in China’s remote regions.

Based on the large scientific installations at the Shanghai Science and Technology Museum, 43 middle school students have designed easily assembled versions which can be transported to rural schools.

They used simple and cheap materials such as cardboard and sticks as well as modern technologies such as 3D printing and computer programming to make 13 pieces.

Six-grader Zhu Zixuan and two schoolmates from the Shanghai Huaer Private Middle School won the “Best Creative Award” for their design of a laser music display.

“We were inspired by a huge laser harp exhibited at the museum,” Zhu said.

Laser beams hit materials and cause electrons to be emitted with light controlling an electric circuit. The electrical signal is then translated to audible sound, he said.

“Based on that principle, people block laser beams to play the laser harp, like plucking the strings,” he said.

“It looks simple and rough. But it can play 21 musical scales,” Zhu said. “Also, we chose materials that are easily accessible. And we use strong yet easily removable fasteners to put up our work.”

Zhu said he wants to do something related to aerospace when he grows up, and the event is just part of his experience toward that goal.

The museum’s Cai Yichao said: “Our exhibits are our treasure and we hope to bring them to children in remote areas. However, these exhibits are too big and complicated, and thus we invited local teenagers to make mobile versions.”

He added: “They were required to use cheap materials and write down every step and the scientific principles involved. So, teachers in rural schools can make the exhibits by themselves.”