No new policies that would prohibit pets from being brought into China have been introduced, Shanghai Customs and Shanghai’s Center for Disease Control and Prevention (CDC) said on Thursday.

They made the statement after German airline Lufthansa temporarily canceled pet boarding services and said it was because of recent rulings by local customs and the CDC.

Customs told Shanghai Daily on Wednesday: “The matter has been reported to the local government, and further investigations are underway.”

Passengers wrote about their experience on Weibo recently, saying that on July 8 they were due to take a Lufthansa flight from Frankfurt to Shanghai with their pets, but were told by an airline official at the check-in counter that their pets would not be allowed on board.

The airline explained that this was because of a request from the “local customs and CDC.” After several hours of negotiation, the passengers had to cancel their tickets, even though they had also booked a seat on the plane for their pets.

Only July 9, customs authorities in China and Shanghai announced on their Weibo accounts that pets could still be brought from foreign countries or regions to the Chinese mainland under regulations introduced in 2019.

The same announcement was also available on the Shanghai government’s 12345 hotline last Sunday.

However, on July 16, Lufthansa claimed that because certain hotels in Shanghai and Nanjing in Jiangsu Province were designated for quarantining arrivals for observation and some didn’t allow entry of pets, it had suspended its pet boarding service for people traveling to the Chinese mainland.

A day later, it said on its WeChat account that, according to a ruling by the local CDC, pets could not come to the mainland via international airlines so it had to stop the service. 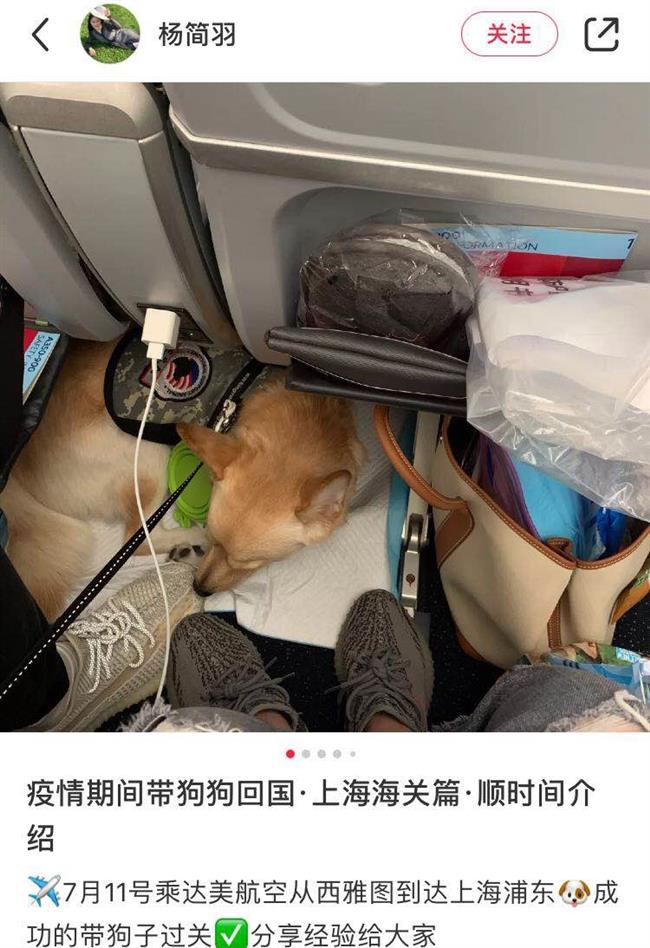 A screenshot shows Yang Jianyu's dog sitting beneath a seat during her flight to Shanghai in July.

Customs authorities in Shanghai responded on Wednesday that they are in charge of pet entry clearance, not the CDC.

Lufthansa told Shanghai Daily last Sunday that the hotels were following orders from the city’s CDC. But the CDC said different designated hotels had different rules and reiterated that there was no rule that would ban pet boarding services.

Statements from customs and the CDC were backed up by a number of people who had recently brought their pets with them when returning to Shanghai from abroad.

On July 11, she brought her dog on a Delta Air Lines flight from Seattle to Shanghai. She said the dog met all the requirements of local customs.

She said if owners had to stay at a designated hotel for quarantine, they could negotiate with the hotel and some might agree to allow pets.

However, some may refuse. Wang, who brought her cat on a Delta flight from Detroit to Shanghai on July 26, said the designated hotel she stayed in wouldn’t allow her cat in so she called a friend to pick it up. Wang preferred not to give her full name. 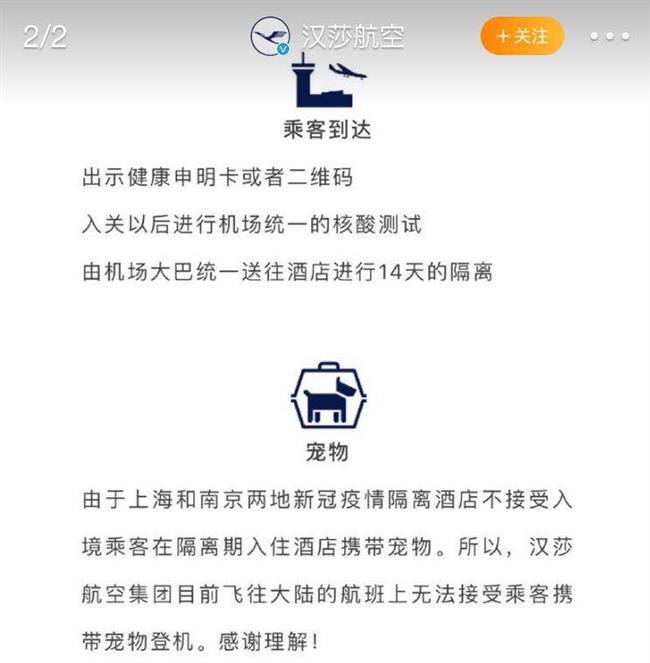 A screenshot of a Lufthansa post on its Weibo account says because designated hotels in Shanghai and Nanjing for quarantining arrivals refused the pets, it had stopped its pet boarding service for people flying to the Chinese mainland.

Zhen, another pet owner whose full name was not provided, agreed with Yang. She said that she took her cat on a Korean Air flight from New York to Shenyang in Liaoning Province on July 17. She is quarantined at a hotel with her cat, paying 1,000 yuan (US$143) in total as an extra cleaning fee for her cat.

“It is reasonable because the cat fur makes it harder to clean carpets and beds, especially during this special period,” Zhen said. “Due to the pandemic, many cleaners are overworked.”

She was told by her designated hotel that at the beginning of the outbreak, some designated hotels didn’t allow pets to stay with their owners. However, after a woman cried every day because of missing her dog which she had brought with her from overseas, it had started to rethink the issue.

She said: “I am so glad that the hotel approved of my cat accompanying me. But I also understand some places do not welcome pets.”

Some people also mentioned on Weibo that other airlines, including Air France, had also canceled pet boarding services on flights to the Chinese mainland.

Air France told Shanghai Daily last Sunday that this was a service issue between aviation companies and China’s departments, but not related to customs or the CDC. People could apply to have small pets in the passenger cabin but applications were likely to fail.

The airline was not able to provide more details about the issue and whether the service could be provided as before is also uncertain.

Wang told Shanghai Daily on Wednesday that because some airlines had halted pet boarding services and that airplane tickets for those who want to return to China were still hard to get due to the coronavirus pandemic, some people were stuck abroad with their pets, feeling confounded and helpless. “Even if the owners can buy tickets, the airline cannot provide the service, and we cannot abandon our pets and return home,” Wang said. “They are our friends and family.” 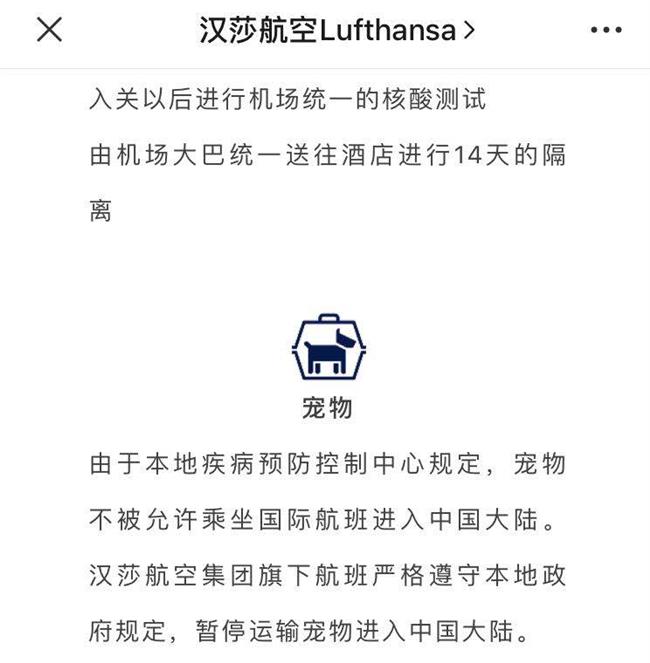 A screenshot of Lufthansa's post on Wechat says according to local CDC rules, pets cannot be flown to the Chinese mainland. 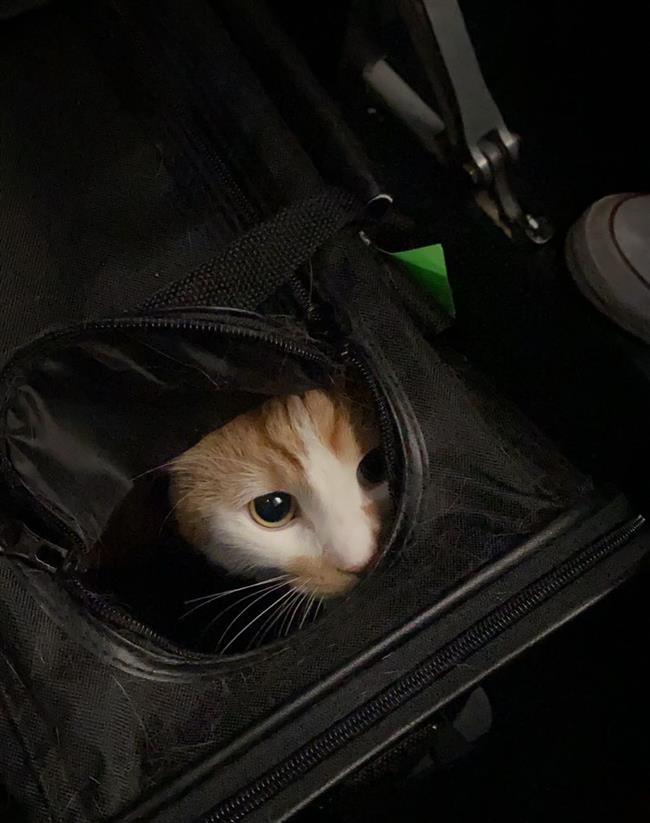 Wang's cat on a Delta Air Lines flight from Detroit to Shanghai on July 26.

According to the city’s customs, here are some tips for passengers who want to bring their pets back to the Chinese mainland from overseas.

2. One passenger can only bring one pet.

3. Pets should have an identification microchip.

4. Pets should have official animal quarantine and vaccination certificates.

Process of bringing pets into the Chinese mainland

At foreign countries or regions

The pet should be implanted with a chip and have a clinical inspection within 14 days before coming to the Chinese mainland for official animal quarantine and vaccination certificates.

1. The pet owner should declare to customs.

2. The authority will check the microchip and carry out a clinical inspection.

3. If a pet with an infectious disease or parasites cannot pass the clinical test or hasn’t been implanted with a chip, it will stay at a designated place for observation for 30 days.

4. If a pet still can’t pass the test after 30 days or hasn’t got certificates, they will not be allowed to enter the mainland and will be sent back to where they came from.

5. Once all requirements are met, the pet can be allowed to enter the country.

(Note: There are only 10 airports providing a designated place for 30-day observation in Shanghai, Beijing, Guangzhou and the Xinjiang Uyghur Autonomous Region. If a pet owner arrives at other airports, a pet that needs further observation will not be allowed to enter the Chinese mainland.)

Additional requirements for those from non-designated countries or regions

1. Pets should have a rabies antibody titer test report issued by 62 laboratories recognized by China’s General Administration of Customs.

2. Those without a report will also be quarantined at a designated place for observation for 30 days.

The 62 laboratories recognized by China’s General Administration of Customs