The Shanghai International Advertising Festival kicked off last week to spark a restart of the city’s major cultural events.

Since the novel coronavirus pandemic hit China in January, almost all cultural events had been suspended. But now the lockdown has been eased and the city hopes to get back on its feet and open the door to many more cultural activities.

The opening ceremony of the festival, which began on July 21, was held at the Bellagio Shanghai Hotel, on the North Bund waterfront in Hongkou District. It was the city’s first large-scale event in the advertising industry since the COVID-19 outbreak.

The festival invited dozens of industrial leaders from all over the world to share opinions on new advertising trends.

“The advertising sector is always deemed as a barometer of the economy,” Shanghai Vice Mayor Xu Kunlin said. “This year’s festival has a special meaning and is expected to help restore market vitality and confidence.”

Hongkou is developing an advertisement and cultural innovation industry cluster at the Music Valley along the Hongkougang River. The cluster is being extended to Financial Street and the North Bund area to combine cultural innovation, scientific innovation and the fintech industries based on the 5G Innovation Harbor.

Shanghai Music Valley welcomes a flood of travelers, tourists and locals on a daily basis keen to embrace its historical architecture, renovated buildings and the city’s unique ecosystem of rivers and canals.

The valley in south of Hongkou, close to the Hailun Road Station of Metro Line 10, covers 280,000 square meters.

The area, with three rivers stretching 1,200 meters and eight century-old bridges, is known for its historical buildings and an old lilong, first built in the 1840s. A lilong is a community of lane houses with narrow alleyways.

One of the most famous historical buildings in this area is the 1933 Shanghai, also known as the Old Millfun. It was once home to the Shanghai Municipal Council Slaughterhouse, the largest abattoir in the city at that time.

The most famous studio is the SNH48 Star Dream Theater, which holds more than 150 performances throughout the year by the Chinese girl idol group SNH48. The theater building, formerly known as the Tiantang Theater in the 1930s, was designed by the famous British Atkinson & Dallas architects in 1932.

Hongkou has established a 2+4+X industrial system based on finance and shipping, along with commerce and trade, cultural innovation, professional and information services.

As a major site for the city’s ambition to become a core global central activity center, Hongkou has various innovative and cultural resources.

A world-class conference and exhibition space is being developed at the historical Yangzijiang (Yangtze River) Wharf of the North Bund region, covering about 70,000 square meters. It will be connected to a multiple of cultural sites and projects on the riverside region to become a business and commerce center on the north of the Suzhou Creek.

The new-look North Bund will include a central business district with office buildings and commercial facilities. The riverside region, covering about 4 square kilometers, will be on a par with the Lingang Special Area and the Pudong New Area in the city’s east and will become a “new engine” for Shanghai’s future development.

“The theme of the advertising festival coincides with Hongkou’s development orientation,” Xu said. 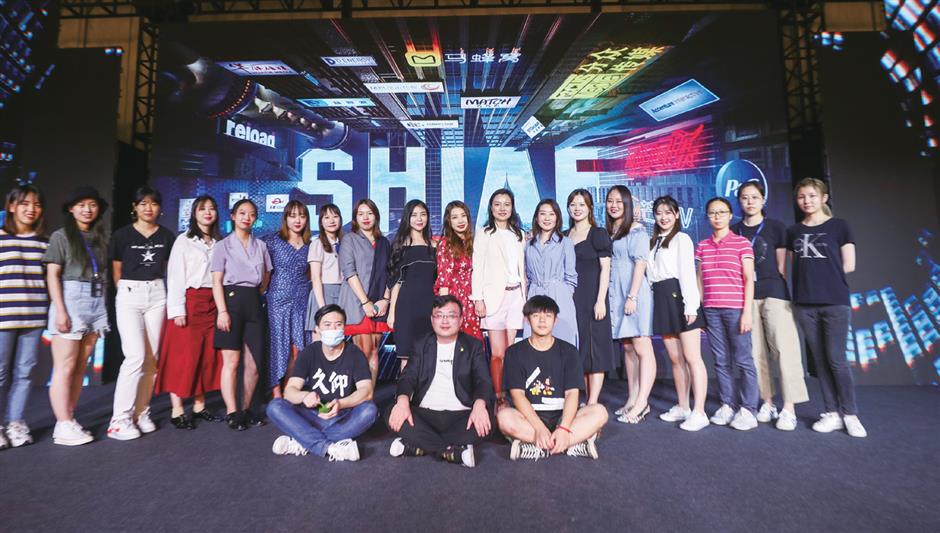 Participants pose for a picture at the awards ceremony of the Shanghai International Advertising Festival.

The advertising festival includes a summit forum, exhibition, awards ceremony and training camp. Another two forums will discuss the relationship between traditional media and new technologies and digitalized consumption and marketing.

Due to COVID-19, a cloud session was held for international guests who could not participate in person.

“We’ve been watching what is happening in China and taking great encouragement from how quickly the economy seems to be recovering,” said Janet Hull, IPA Director of Marketing Strategy and Chair of UK Advertising Export Group (UKAEG).

“We look forward to bringing you a virtual experience to showcase the best of UK advertising and seek ways to form new friendships with Chinese agencies and brands.”

Ellen Smyth, CEO of New York Festival Advertising Awards, said, “The coronavirus has impacted the US advertising industry. Although advertising has been affected, agencies and brands continue to create ads.

“The advertising relationship between China and the US will continue and flourish.”

Hwanjin Choi, chairman of Advertisement Stars (AD STARS) in Busan said, “South Korea and China are a community with a shared future where many industries are interconnected.”

“Since the outbreak, Shanghai’s advertising industry has taken an active part in the promotion of anti-coronavirus knowledge and encouragement,” said Du Guigen, president of the Shanghai Advertisement Association. “Local companies and professionals have posted a large number of public service advertisements in newspaper, television, mobile phone, subway and other platforms.”

Posters of the winning advertisements of the Shanghai International Advertising Festival Awards were exhibited on the sidelines of the opening session. Many included the fight against COVID-19.

A short video entitled “Missing Wuhan” shows the daily life of folk and landmark sites of the central China city, which was the worst affected area of the COVID-19 outbreak. The video was launched during Wuhan’s darkest period and has been posted over 350,000 times on the Internet.

Other award-winning works include a series of 32 posters from the cultural and tourism administration of Wuhan to express gratitude to medical teams assisting the city from across the nation. The posters were shared on social media around 280 million times.

A training camp was set up for 120 students, from 33 colleges from across the world, to study and compete with each other under the guidance of top media groups, such as Accenture Interactive, McCann Worldgroup and Havas Group China, and a winning team were be selected and announced during the awards ceremony on July 23.