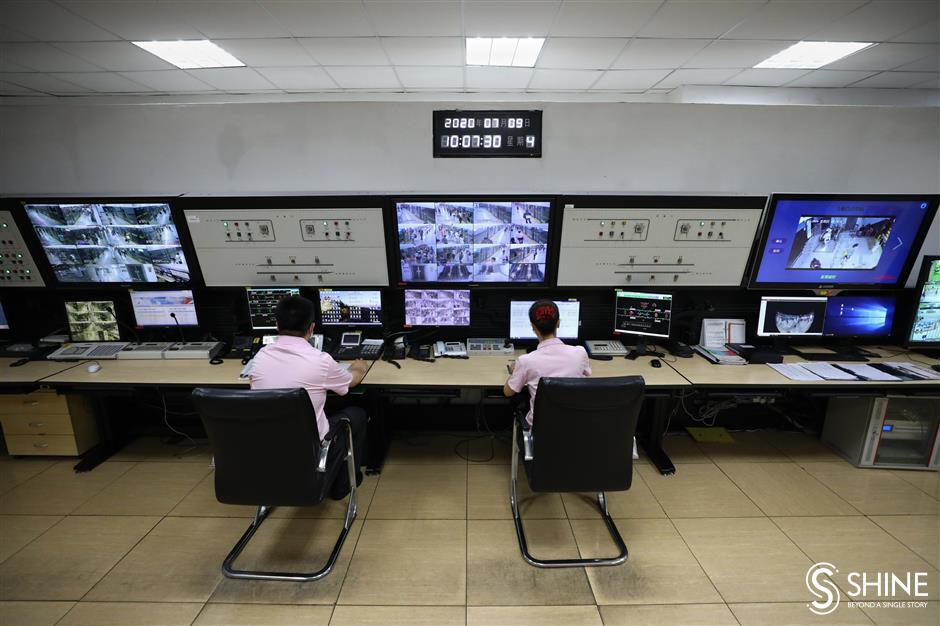 Metro staff work in the monitoring room at Hanzhong Road Station on Metro Lines 1, 12 and 13.

Metro train delays have been significantly reduced over recent years thanks to the application of smart technology, said Song Bo, vice president of Shanghai Metro, during a smart Metro forum held in Shanghai on Thursday.

The average train-travel kilometers per delay of over five minutes was 7.1 million last year, up from 2.3 million in 2016, and the number of train door errors reported last year was reduced to 577, from 951 in 2016, Song said.

For every million train-kilometers covered, the number of errors reported was reduced to 41.3 last year, from 71.2 in 2016, according to him.

The ambitious new smart project, first introduced in 2017, aims to use cutting-edge technologies to enable visualization of data collected from all smart devices, automatic troubleshooting and the creation of different apps to manage the Metro system with less manpower.

On Metro Line 17, for example, daily performance checks for trains have been reduced from 2.4 hours to 1.1 hours with 20 percent fewer workers needed, as new smart devices can finish 67 percent of the job on their own, Song said.

Also, the average reaction time to errors has been reduced to under 10 minutes, from 60 minutes previously, and the average train-kilometers covered per error has risen to 10.5 million from the previous 3 million, he said.

Besides, it takes 80 percent less time for workers to react to an error in power supply, and the power supply system is now checked six times per day instead of four times previously, with 30 percent fewer workers needed, he added.

“It has hardly ever happened to Metro Line 17 passengers that a train on the line was delayed for over five minutes,” he said of the line that started operating at the end of 2017.

Song said 30 percent of the smart project is expected to be completed by 2025, up from 18 percent at the moment, covering 20 Metro lines.

Song said the company seeks smart solutions to the maintenance of Metro trains as its manpower will forever lag behind the expansion of the Metro network.

The company currently has over 8,000 employees working on train maintenance, and human resource costs account for 70 percent of all costs of maintenance. The new solutions are expected to cut the company’s costs by 8 percent, he said.

Another problem is that a few lines constructed earlier are more susceptible to errors due to aging and a relatively larger number of daily passengers. Song said that in 74 percent of all delay incidents from 2010 to 2018, trains were delayed for over 15 minutes, which was not satisfactory.

There are currently 17 Metro lines in Shanghai with 415 stations and a total rail length of 705 kilometers, making the city’s Metro network one of the world’s largest.

Last year, Shanghai Metro had a daily average of 10.6 million passengers, with the peak number being 13.3 million.

By the end of this year, the number of trains running on the city’s Metro network is expected to surpass 7,000.

The first Metro line in Shanghai started to carry passengers in 1993.