A new bilingual book about the stories behind the buildings along Shanghai's iconic Nanjing Road was released at the ongoing Shanghai Book Fair on Sunday.

'Shanghai Nanjing Road', by Qiao Zhengyue, or Michelle Qiao, columnist and chief reporter of the Shanghai Daily, has more than 30 articles in Chinese and English. It relates how Nanjing Road developed from a small country lane to what people now call the "Busiest Shopping Street in China." It also features historical photos and illustrations. And there are reports from Shanghai's old English newspapers as well as the latest research. 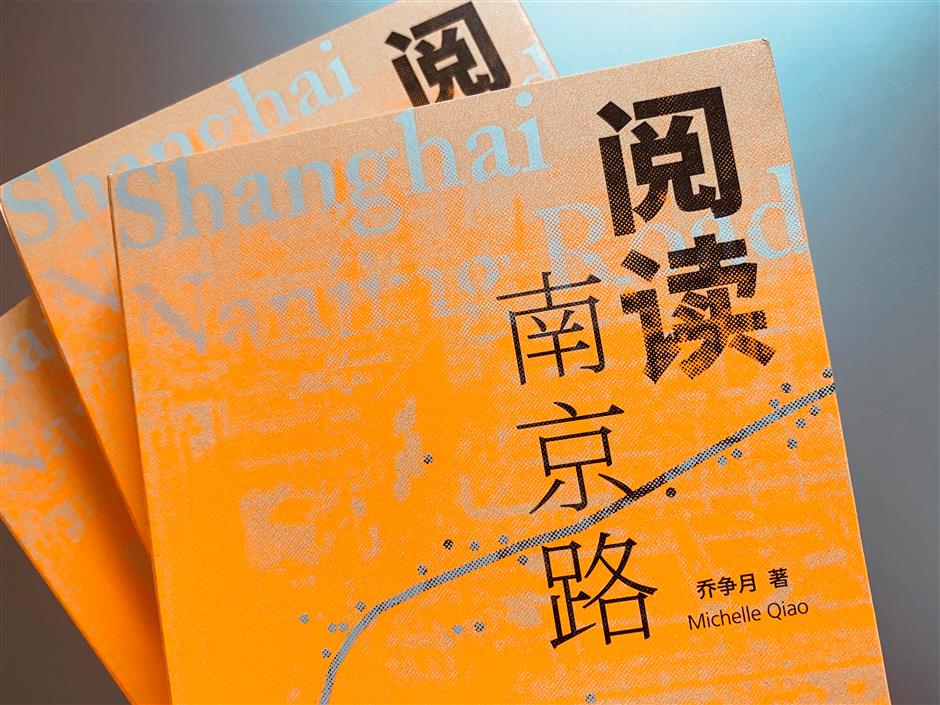 The book Shanghai Nanjing Road by Michelle Qiao makes it's debut at the 2020 Shanghai Book Fair.

If the curve of the Huangpu River at the Bund is the "bow" of Shanghai, Nanjing Road, a straight thoroughfare connecting the Bund and Jing'an Temple, is its "arrow" on the east-west axis. It is a slice of both the city's history and modernity with old and new structures.

The history of Nanjing Road dates back to the mid-19th century when it was originally named Park Lane in the British Concession. Foreigners would stroll or exercise their horses in the street. Later with the expansion of the concession's road network and the extension of the Bund's business growth, which brought large volumes of imported foreign goods, it became a street of retailers and was named Nanjing Road.

It was the country's first asphalt road, paved in 1852, and was host to the city's first car in 1901 and first tram in 1908. Paved with Indian lignum from the Bund to today's Tibet Road, it became the most beautiful street in the Far East, Qiao writes in her book. She was also captured by its charm.

"When I was doing my previous book about the Bund, I often took Metro Line 10 and stopped at the Nanjing Road E. Station to head to the Bund," Qiao said.  "In 2017, I noticed this street was receiving a change with several of its historical buildings under restoration and upgrading. Then I did some investigation and learned many stories about the buildings that people may have never heard."

She then wrote this book, believing it can show the public the direction of the city's development from a glimpse at its busiest business street.

"I think a city's architecture can always mirror the city," she said. "The 33 buildings in my book show the changes of Nanjing Road along with the city's growth.

"And I would never miss any prime location in Shanghai under my pen," she joked at the launch ceremony.

She kept up with the historical buildings' changes right up till before the book went to print. When she heard that the former home of silk emporium Laou Kai Fook would turn into a flagship store for domestic technology giant Huawei after its tenant American fast fashion retailer Forever 21 exited the Chinese market, she persuaded her editor to postpone printing. 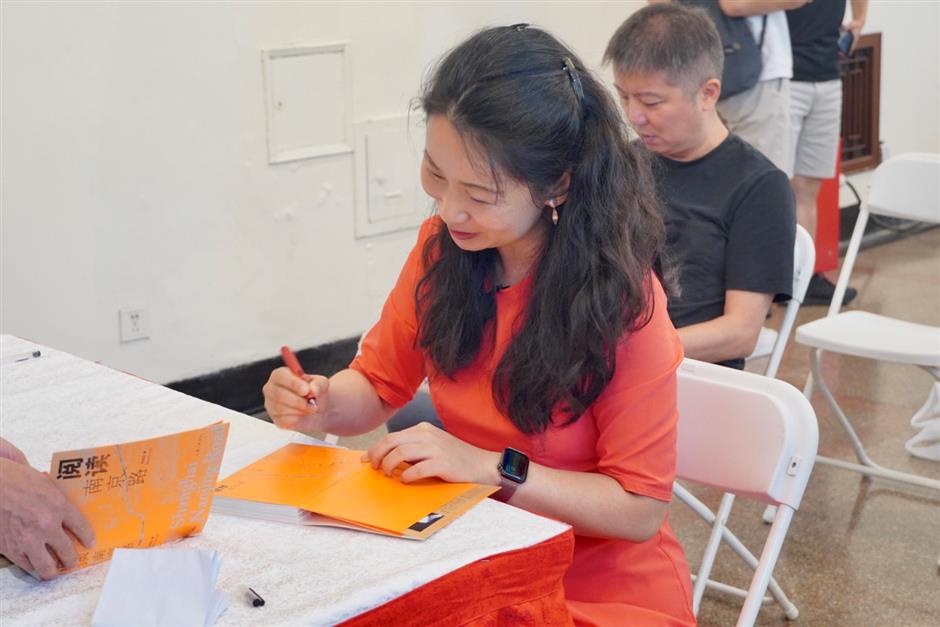 Michelle Qiao signing a book for a reader.

During the novel coronavirus pandemic, she went to the site in early February this year and took a picture of the building, which was under construction. On June 24, she visited it again when the flagship store opened and sent the latest pictures to the editor.

According to Zhang Xuefei, a design director in Nanjing who contributed to the photos in the book, the structures along Nanjing Road show different looks at day and night. Sometimes they had to wait until the night for the right look. That could be a hard work because of the complex conditions of light at night.

Another difference is that due to the epidemic, there was no face-to-face conversation and they had to communicate closely online before the publication.

Liao Fang, a local architect who drew sketches of the buildings, said he started to cooperate with Qiao when she was writing columns about Nanjing Road. The sketches in the newspaper now serve as illustrations in the book.

"The building that left me deepest impression is the Wing On Department Store, which was established to revitalize the home-made goods in China," Liao told Shanghai Daily.

With its name Wing On, whose Chinese characters literally mean "forever peace," Liao thinks this Baroque building also expressed the wish for peace of the Chinese.

"The building's western-style lines and calligraphic shop sign is also a mix of the East and West, which is a feature of Shanghai," Liao added.

Nowadays, Nanjing Road still lights up the city with its neon signs, just like American missionary and educator F.L.Hawks Pott described in his 1928 book 'A Short History of Shanghai'. 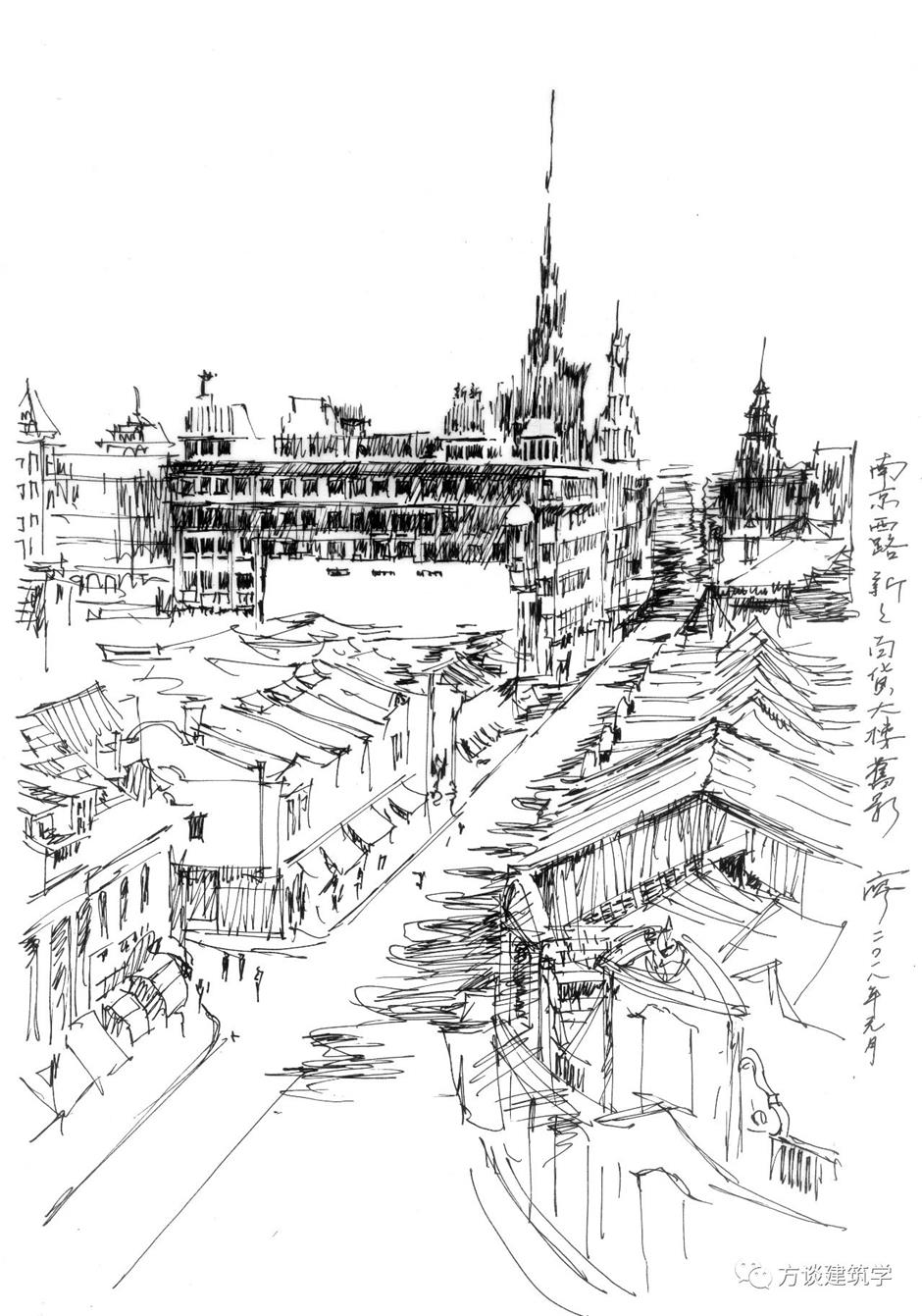 A sketch of Sun Sun Co, one of the four big Chinese department stores on Nanjing Road, is drawn by architect Liao Fang.

"At night they were illuminated by thousands of electric lights, and helped make the upper part of Nanking Road a 'great white way'," he wrote. "Most significant of all, they answer to a demand and are crowded by shoppers, many of whom were visitors to Shanghai from other cities. They mark both the gradual process of the modernization of China and the growing prosperity of Shanghai."

On Sunday, the city's culture and tourism administration also launched a new book 'Stories of Shanghai Architecture' about local landmarks. The administration has designed ten routes with the buildings and structures  selected  for tourists to enjoy.