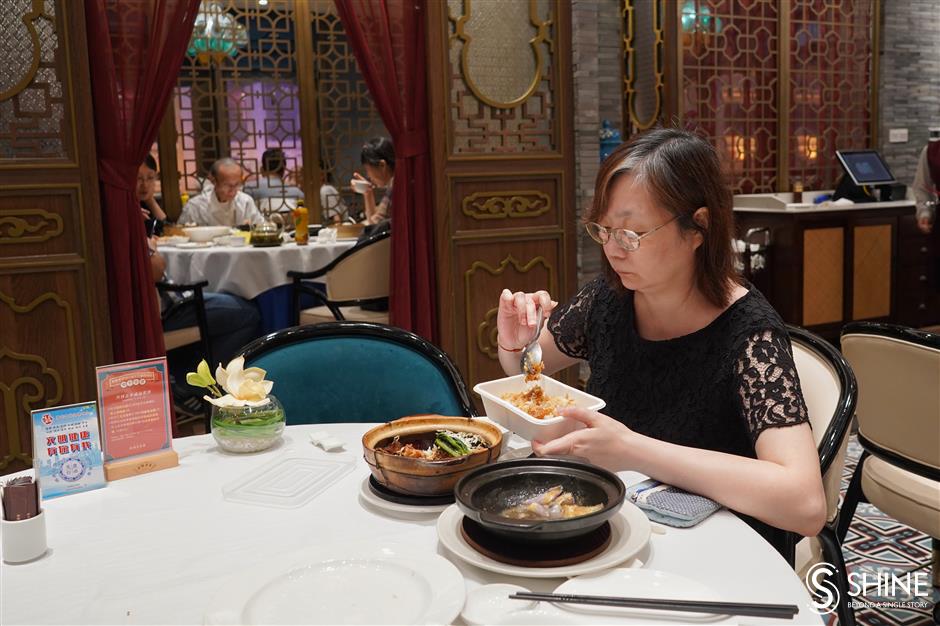 A woman packs her own leftover food at Sunya Cantonese Restaurant on Monday.

Food waste in online orders and online broadcasts of people eating are to be brought under greater scrutiny in Shanghai.

The city government launched a campaign against food waste on Monday, after President Xi Jinping urged efforts to curb food waste throughout the country.

Local guidelines have been issued which ask restaurants to indicate the amount of food and the recommended number of diners for each set of dishes on their menus and to offer food at smaller portions than standard.

Good food waste management is also expected to factor in the government’s official recommendations of restaurants through various awards. Restaurants that do a good job could potentially pay less to the authorities for garbage sorting.

Travel agencies are asked to remind tourists not to waste food on group tours.

The campaign will also be carried out in schools, hospitals, factories, government organizations and communities.

Pan Min, director of the office of the city’s social morality construction commission, the government organization in charge of coordinating other government departments in the campaign, said the campaign will target certain key groups of people and key venues.

The major groups targeted are government officials, teenagers, office workers and public figures, and the major venues targeted are restaurants and tourist attractions with dining options.

“Food waste is less a problem in households and canteens of government organizations, companies and schools than in restaurants where people tend to order more food than enough when they have guests at the same table,” Pan said.

He also said the campaign will focus on seeking systematic mechanisms in curbing food waste so as to make the effort sustainable.

The Shanghai Commission of Commerce said on Monday local efforts on food saving over the past eight years had seen great results, with the amount of kitchen waste now down half of that before 2012.

The commission said it will introduce industry service standards for restaurants in the provision of different kinds of food, such as meals, fast food and canteen food, based on consultations with businesses and consumers.

The government of the Pudong New Area said it will provide lunch with better recipes and more precise portions to over 500,000 middle school, primary school and kindergarten students in the upcoming semester and to educate some 1.08 million households on food saving.

Meituan, an online food ordering platform, will have table mats printed with slogans encouraging people not to waste food with orders.

Shanghai Daily visited some restaurants on Monday and found a willingness to support the campaign.

“We will remind our consumers when they have ordered enough dishes and ask whether they need to pack leftovers at the checkout,” said the manager of Xibo Xinjiang Cuisine on Maoming Road N. in Jing’an District surnamed Chen. “Also, I will remind our workers not to waste food while having meals.”

Sunya is a restaurant offering Cantonese dim sum down the same street. As there are usually multiple buns or bites on a dim sum dish, the restaurant has already started to mark the number of those on a dish on the menu to let consumers know whether they have ordered enough food. 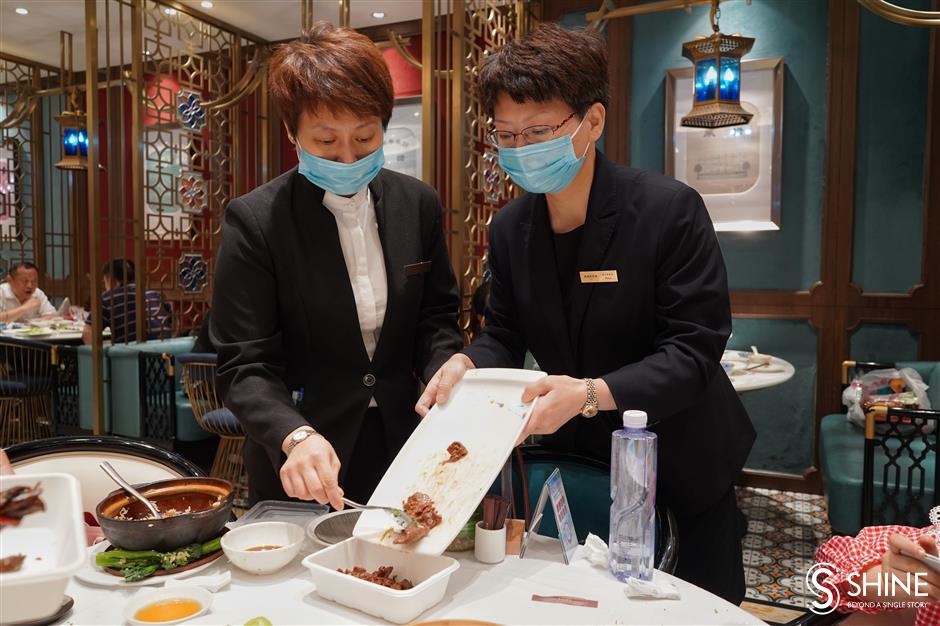 Some residents said they chose to order fewer dishes and pack the leftovers nowadays.

Kem, a man from Nepal, got a takeout from Xibei restaurant on Wujiang Road in Jing’an District at noon on Monday.

“I enjoy tasting various types of dishes from different restaurants. I used to buy a lot but now I know that I should not waste food, so I order less than before,” he said.

Zhou Hui, a resident, gave her suggestion for saving food in company canteens.

“I think they should have a better estimation of the number of people who need to have meals and be preparations according to that,” she said.

“People may think that they should order a full table of dishes when they invite someone to dinner, but this idea needs to be corrected,” she said.