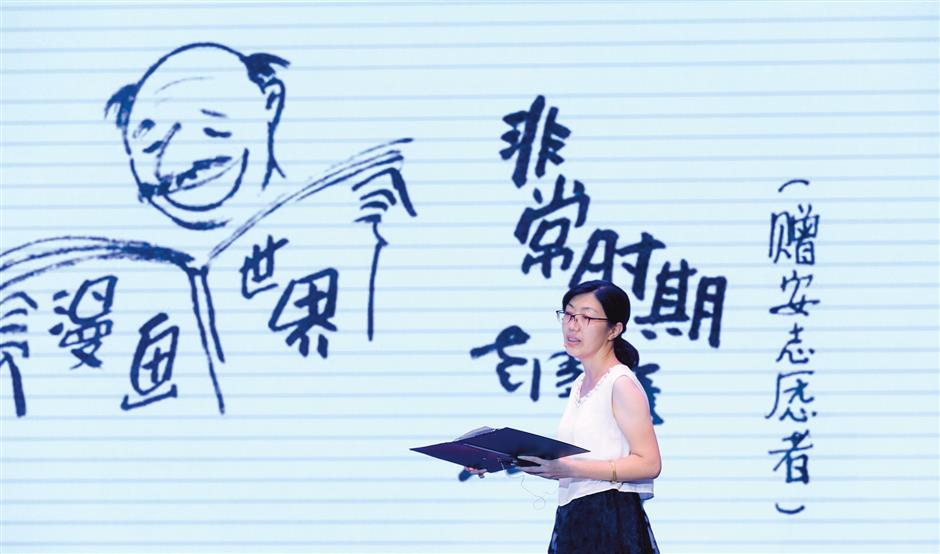 An Chenxia, an employee working for the Hongkou medical insurance center, recommends the second-hand book sharing program that had benefited her and her daughter. An was among the seven residents who shared their reading experience at the sharing event organized by Hongkou District during this year’s Shanghai Book Fair.

Hongkou District, once a popular place for many famous Chinese writers, is striving to revitalize its public reading and cultural ambiance.

The downtown district aims to build on the influence of the annual Shanghai Book Fair, which ended on August 18 this year, by creating a “reading highland.”

The district has introduced a number of public activities to promote reading and culture. Reading rooms, clubs and poetry reciting have been encouraged in the local neighborhoods. The district government has released a list of recommended books to the public.

The owners of many popular bookstores in Hongkou, who became online sensations during the COVID-19 lockdown, have been invited to produce a series of short videos on classic literature to share with their online audiences.

During the height of the coronavirus outbreak, there were many online reading activities and public lectures to meet the public’s cultural demands.

As a key event of the Shanghai Book Fair, a reading and sharing event was held in an activity center in Hongkou on August 17. People from all walks of life shared their reading experiences with each other. The event was guided by the publicity department of Hongkou and hosted by the district’s culture and tourism administration and Jiaxing Road Subdistrict.

“Such an event aims to find reading clubs and enthusiasts to encourage public reading,” the organizers said.

Several citizens shared reading experiences at the event as well as favorite reading sites near their home or work places.

The Hongkou publicity department also released its latest Rainbow Booklist to the public. The government body introduced a reading list in 2018 and 10 new books are recommended every year.

The newly released list includes books about the history of the Communist Party of China and the country, as well as history and culture related to Hongkou. The books under the theme were sent to libraries, community service centers and office buildings for the public to read.

Hongkou has long been regarded as a gathering place of cultural celebrities, as well as the birthplace of haipai culture, the unique Shanghainese culture of East-meets-West.

Over a dozen reading rooms have been opened near community wet markets across Hongkou for migrant workers and their children. A number of book exchange programs have been initiated. A youth reading festival, for instance, has been in existence in Hongkou for nearly a decade.

Yang Huyu, whose parents are migrant workers from central China’s Henan Province, shared his reading experience in one of the reading rooms within Liyang Wet Market, where Yang’s parents operate a meat stall. Most of the readers are stall operators.

“The reading room and books have not only enriched my extracurricular life but also made me feel the warmth of the city,” said Yang, whose name Huyu comes from the abbreviation of the city Shanghai (hu) and his hometown Henan (yu).

An Chenxia, an employee working for the Hongkou medical insurance center, recommended the second-hand book sharing program that had benefited An and her daughter.

The Hongkou District Library launched the book sharing program in 2016 to encourage readers to exchange books they had read. The library’s original collection came from readers’ donations.

An said she had exchanged over 100 books from the program over the last 12 months.

“We can not only read a lot more books but make friends with the owners of the books as well,” An said.

Luo Qi, the operator of Kaijuan Bookstore tucked away in the Ruikangli neighborhood on Jiaxing Road, introduced the private library’s story.

Luo’s partner Fan Dongwei, who was born in a shikumen, or traditional stone-gate house, community in Hongkou, opened the bookstore with over 5,000 books on literature, philosophy and art. It focuses on public welfare events, photography, painting and innovative markets.

The bookstore also publishes a newspaper to share the latest news and notices mainly for senior residents in the community.

There are eight subdistrict-level libraries in Hongkou and several book clubs established among the libraries’ patrons.

The members of the Jiangwanyuan Book Club, which means the origin of Jiangwan, have launched a series of painting and calligraphy exhibitions. The Jiangwan Subdistrict Library has encouraged retirees to take part in various activities.

Zhu Fang, the head of the club and a retired senior accountant, said club members had shown great passion and enthusiasm in art creation and various other voluntary events. For instance, they serve as guides for children at the subdistrict library during the summer and winter vacations. 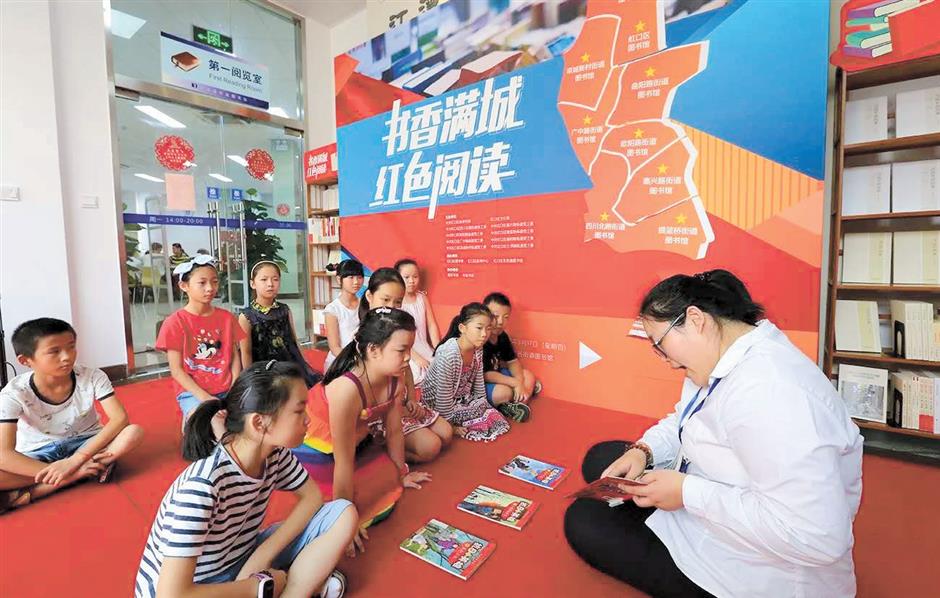 Young readers listen attentively at an activity held at a Hongkou library.

Hongkou has organized many online reading activities during the coronavirus pandemic. Jointly organized by the district’s publicity department and Guangxi Normal University Press Group, the two-month Rainbow Reader online activities, which ended on April 23, attracted 2,047 readers from across the country, who shared around 4,500 reading comments.

Famous writers, such as Zhao Dongmei and Chen Fusheng, led online participants to read five selected books during the event.

An online class on Lu Xun was held during the book fair this year. Zhan Dan, a professor with Shanghai Normal University and teacher with Shanghai High School gave several classes on the Internet introducing the “father of modern Chinese literature.”

Lu, whose real name was Zhou Shuren, influenced the thinking of many 20th-century Chinese people with his biting short stories, poetry, essays and literary criticisms. Chairman Mao Zedong called him “the saint of modern China.”

Lu lived in No. 9 building at 132 Shanyin Road in Hongkou between 1933 and 1936 with his wife Xu Guangping and son Zhou Haiying. He wrote many influential essays in the three-story apartment, as well as meeting Communist Party leader Qu Qiubai (1899-1935) and other left-wing writers.

On August 14 during this year’s book fair, Hongkou hosted a poem reciting event at the Sinar Mas Plaza, also known as the White Magnolia Plaza, the tallest building in Puxi.

About 10 poetry lovers gave recitals, some of which were about the COVID-19 fight. Famous local bard Zhao Lihong shared his new work “Review in Spring,” also on the anti-coronavirus campaign theme.

Gu Yajie, a medical worker from Hongkou’s disease prevention and control center, recited a poem she penned during her fight against the disease on the front line.

“I have a deep feeling to every word and sentence of the poem,” she said.

Other poets expressed their affection for Hongkou and Suzhou Creek. Liang Kun, a firefighter of the Hongkou fire prevention brigade, recited the “Loving Song of Suzhou Creek.”

“Whenever I saw the flowing Suzhou Creek, I feel like sleeping in her arms and listening to her chant,” Liang said.

He has been safeguarding the safety of the city at the North Bund waterfront since 2018.