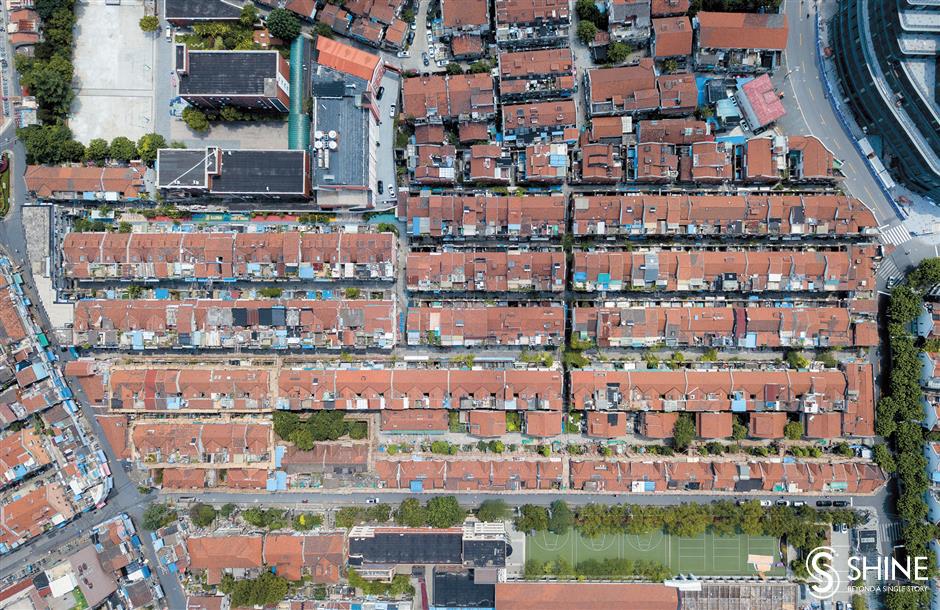 An aerial view of the Hengfengli community in northeast Hongkou District.

Hongkou District has launched a major renovation on a century-old neighborhood. The government is introducing a series of projects to restore the historic ambience on Shanyin Road.

The Hengfengli community, in the northeast of Hongkou, is within Shanyin Road Historical Conservation Zone, which includes the Duolun, Shanyin and Tian’an roads and its accompanying characteristic residential houses.

The neighborhood facelift aims to restore its historic appearance and improve the living conditions of its residents.

Yan Yumei remembers the glory days of the Hengfengli community, when she got married in the traditional neighborhood three decades ago.

The rows of shikumen, Shanghai’s unique stone-gate buildings, on Shanyin Road were built in the 1920s where most of the residents were intellectuals and successful businessmen, Yan said.

“The region around Shanyin Road was once an affluent community, with many celebrities living nearby. I’m looking forward to the facelift to revive the glory of the area,” she said.

The brick-and-wood structures have become out-of-date, and the living space is cramped by an increasing number of inhabitants. Yet, Shanyin Road is considered to be an “open-air museum” because of its rich variety of building styles, including shikumen and those built in the 1930s and 1940s.

The first road built in Hongkou in 1911, formerly known as Scott Road, features houses and villas in English, Japanese and shikumen styles.

The 651-meter-long street is lined with leafy plane trees that were planted in the 1970s which give the street a certain romantic charm.

Hengfengli at Lanes 69 and 85 of Shanyin Road has nearly 100 three-story shikumen houses, which are listed as city heritage structures.

The liaison office of the headquarters of the third uprising of local workers in 1927, led by the Communist Party of China against warlords occupying Shanghai, was based there. The Party School of Central Committee of CPC and the CPC Jiangsu Province Committee were once set up in the neighborhood.

The renovation, scheduled to be completed by the end of the year, will repair exterior walls, rooftops and supporting structures.

Wooden pillars and mortise-and-tenon supports have become decayed or broken. These will be fixed during the project based on original blueprints.

Some shared kitchens and toilets, as well as public areas, will be renovated to improve the living conditions of residents.

To restore the historical ambience of the traditional community, the project will replace the aluminum alloy windows on the ground floor with wooden windows. 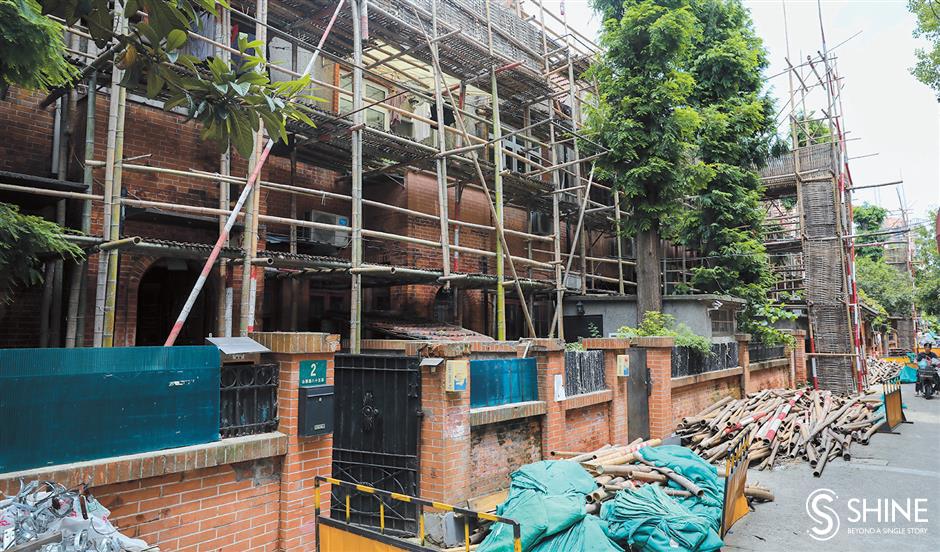 Scaffoldings outside the century-old shikumen buildings.

Renovations will involve the use of unique “water-washed stones” and “fair-faced bricks” that increase wall waterproofing while preserving the historical look. The concrete paths within the neighborhood will be restored to original brick tiles.

Yan lives in a three-story apartment building, one of the best-preserved in the community. Other buildings are usually shared by multiple inhabitants. The house was purchased by her husband’s grandmother and the original decor has been kept.

“It’s a dilemma for us, to keep our ancestor’s heritage, or improve our living condition with a thorough renovation,” Yan said.

Some of her neighbors have redecorated their homes and they look a lot better than modern residential apartments, said Yan. The ongoing facelift will partially solve her problem. The creaking stairs and floors will be stabilized and the house will look beautiful from the outside, Yan said.

Every year she invites family members, who used to live together in the building, for a banquet on Chinese New Year’s Eve.

“I’m looking forward to the family reunion next year when the house has a brand-new look,” Yan said. “Many residents hope to get relocated by the government, but I would rather stay in a traditional community where I can talk with old neighbors and take part in various community activities.”

Yan joined the COVID-19 prevention volunteer team organized by the neighborhood committee in February. Part of their job was to check temperatures and make registrations for residents at the entrance. She has strong emotional bonds with the many time-honored brands and eateries on Shanyin Road and Sichuan Road N., such as the West Lake Restaurant, Sixin Dumpling, Wanshouzhai Small Steamed Buns and a small mutton restaurant. They are about to be renovated to restore the buildings to their former glory.

The Sixin Dumpling restaurant, for instance, has reopened after a three-month renovation. The traditional eatery serving sesame and meat dumplings dates back to the 1930s. All dining tables have been moved to the ground floor for the convenience of senior patrons, while the upper floors will be able to host banquet or family gatherings.

Other nearby time-honored businesses will soon get an upgrade. The renovation project on Hengfengli is part of a campaign to revitalize Shanyin Road.

Several blocks away from Hengfengli, a historic neighborhood, where Lu, the “father of modern Chinese literature,” spent the last three years of his life before death in 1936, has been given a facelift.

The lane at Continental Terrace, built in 1931 on Shanyin Road, has preserved the new lane-style buildings while celebrating the man of letters.

Lu lived in No. 9 building at 132 Shanyin Road between 1933 and 1936 with his wife Xu Guangping and son Zhou Haiying. He wrote many influential essays in the three-story apartment, as well as meeting Qu and other left-wing writers.

Renovation has been completed on the nearby League of the Left-Wing Writers’ Memorial Site in Shanghai, which was established in the 1930s with the guidance of Lu to fight Kuomintang at home amid a worsening international situation.

The British neoclassic-style garden villa, a listed heritage structure, was built in 1924 and converted into an exhibition site in December 2001.

The renovation repaired leaks, eliminated termites and fixed many broken parts to restore the building’s original appearance. The interior and original decor, such as the ceiling, fireplaces, iron window frames and colorful floor tiles, have been restored.

The exhibition space, featuring historical photos, original publications, artifacts and furniture once belonging to China’s most famous modern writers, has been expanded to 350 square meters from its original 100 square meters.

“The new exhibition introduces the full history of the league and China’s left-wing revolutionary literary activities,” said He Ying, curator of the memorial. “It aims to showcase the contributions of the league to Chinese literature and culture as well as for the nation’s liberation, independence and people’s happy lives.”

Many new exhibits were donated by the descendants of left-wing writers and citizens over the past two decades. The third floor of the building has been opened for the first time, along with a visitor’s center, a souvenir shop and a reception room.