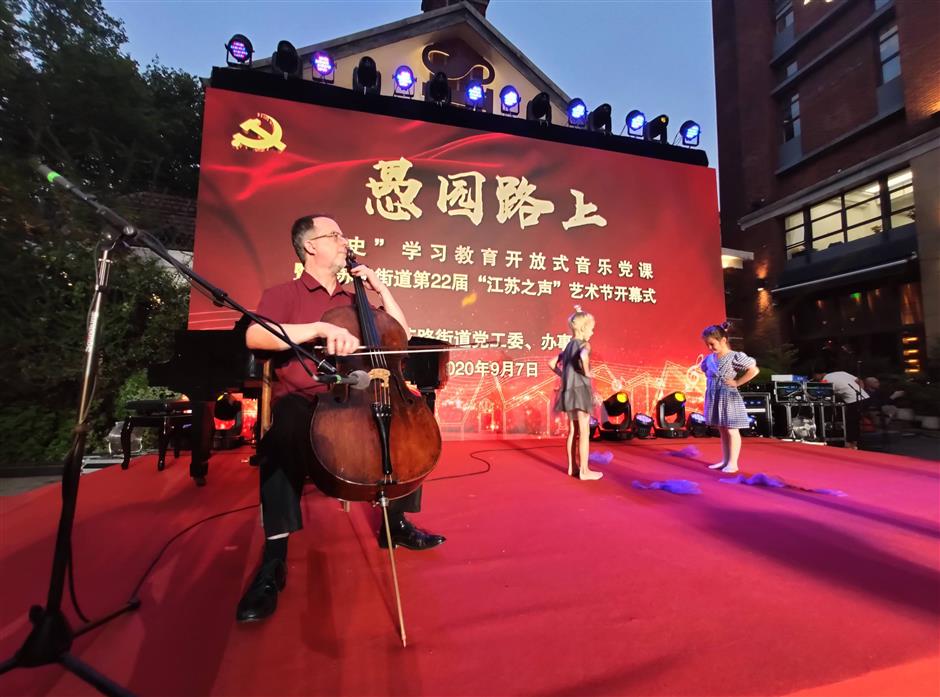 Artists perform at an open-air concert and lecture on Yuyuan Road on Monday.

Residents and employees on historical Yuyuan Road were invited to an outdoor concert and talks on Monday night to learn about the road’s history relating to the Communist Party of China and China’s reform and opening up.

People who lived on the road and community workers told of their experiences on the road, while classic songs such as “Ode to the Red Flag” and "My Motherland and Me" were performed.

The event, organized by the Jiangsu Road Subdistrict, was the first of its kind to introduce the over-century-old downtown road and promote the history of the CPC and China’s reform and opening up as well as its socialist development to the public, the subdistrict said.

The subdistrict also released a walking map that incorporates key historical sites and has organized a volunteer team to guide visitors touring the road.

Yuyuan Road, which runs through Shanghai’s Changning and Jing’an districts, dates back to 1911. It features well-preserved historical villas once home to big names such as scientist Qian Xuesen (1911-2009), writer, translator and scholar Shi Zhecun (1905-2003) as well as New Zealand-born writer Rewi Alley (1897-1987), who came to Shanghai in 1927 and was later involved in China’s revolution and reconstruction.

The former site of the editorial office of “Bolshevik,” an official magazine of the Communist Party of China Central Committee, is also on the street. 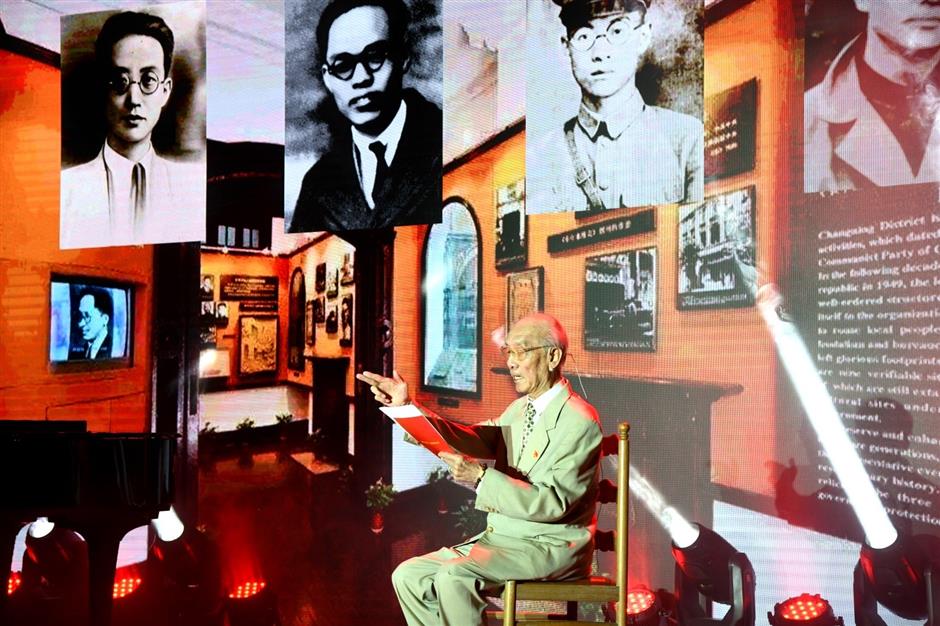 Chen Chun, one of China’s earliest broadcast hosts and a senior resident on the road, introduced the former CPC sites such as the editorial office and Shanghai Bureau of the CPC central committee.

Wang Jingwen, a former official with the famous “Good Eighth Company on Nanjing Road” of the People’s Liberation Army shared stories about when he led the company which was based on the road.

Ying Minghong, former president of the Shentong Group, the city’s subway operator, talked about how the Metro Line 2 and 11 were built beneath a road that featured numerous protected structures.

Stores about what is happening to the road today were also heard. Community workers of a nearby neighborhood committee recited a poem about how they worked together with volunteers and residents to fight the novel coronavirus pandemic.

While highlighting the road’s history and culture, the subdistrict has also been improving the living standards for residents of out-of-date houses.

A coordination room is hosted by subdistrict officials to solve all kinds of problems for residents. Multiple seniors’ canteens have been developed along the road, while the subdistrict has also released the city’s first community-level caring standard for seniors with cognitive disorders. 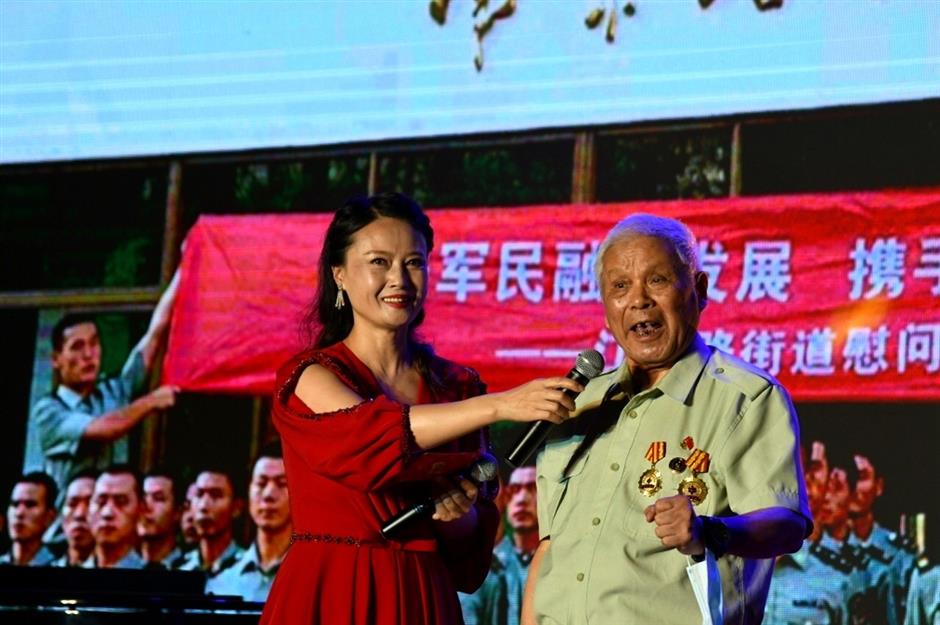 Wang Jingwen (right), a former official with the famous “Good Eighth Company on Nanjing Road” of the People’s Liberation Army. 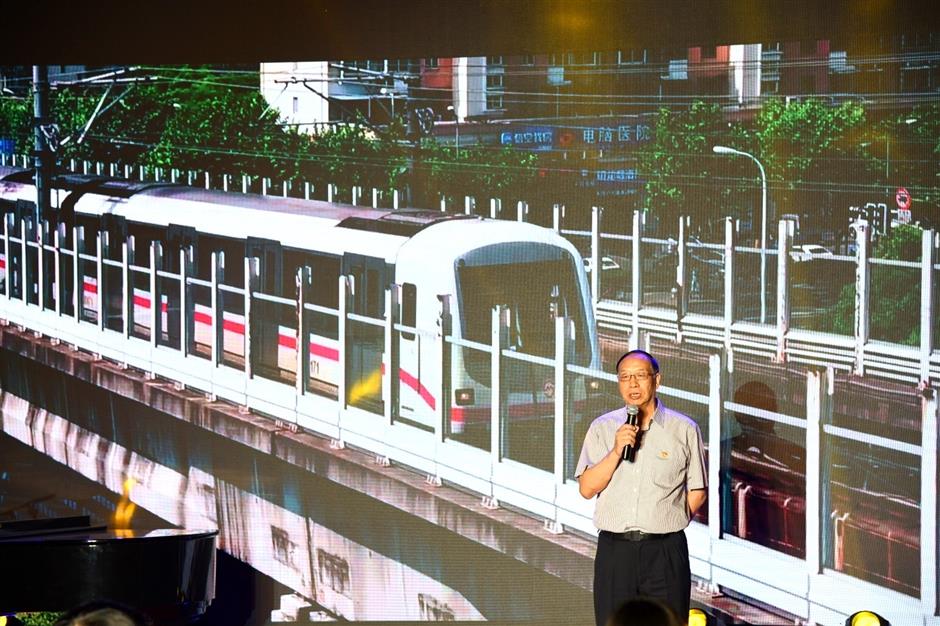 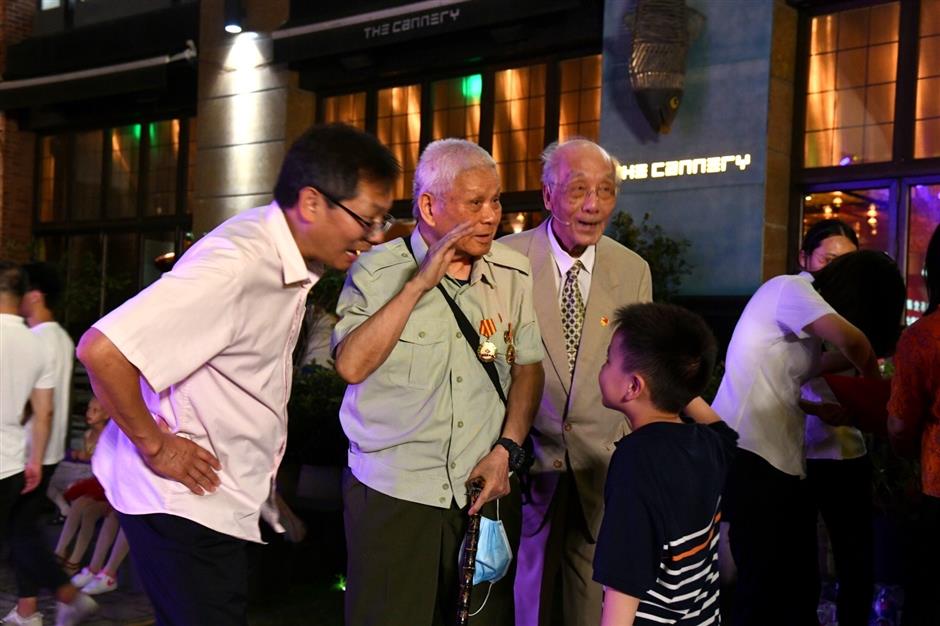 Speakers at the event interact with members of the audience.