Students start life without their parents 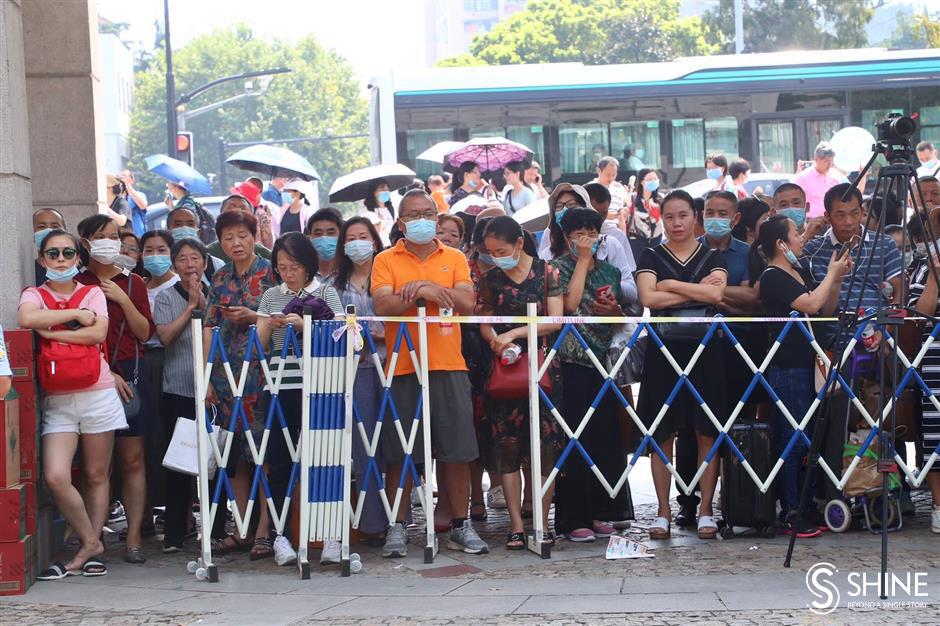 Parents and relatives stay at the gate as their children enter Tongji University on Siping Road on Monday.

Universities in Shanghai are stepping up efforts to help new students settle down in their new environments as parents are not allowed on campus because of COVID-19 prevention measures.

At Tongji University, 730 volunteers and 100 shuttle vehicles were on standby at its two campuses in Yangpu and Jiading districts to transport students and their luggage to dorms.

When students arrive, volunteers put their luggage on trolleys and take them to a stop to wait for shuttle vehicles. There are also volunteers at the dorm to help them with their luggage. 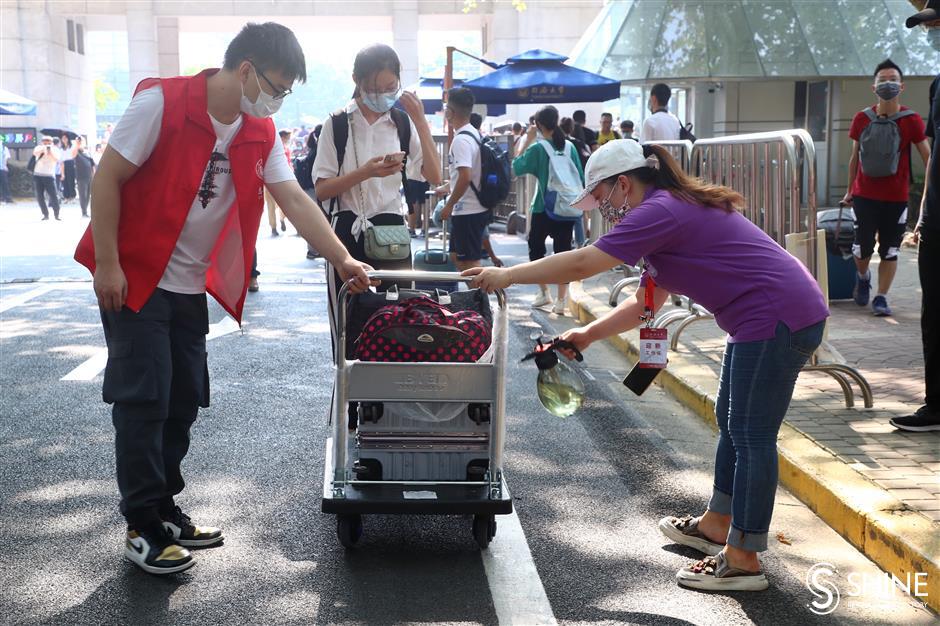 A faculty member (right) disinfects a student's luggage carried by a volunteer in red vest.

Zhong Yihong from Chengdu in southwest China’s Sichuan Province, arrived at the university entrance on Siping Road in Hongkou District at around 10:30am on Monday with her parents, two aunts and two uncles.

They asked a photographer to take a group photo under the university gate before Zhong walked in with her luggage.

“She is the youngest child of her generation in our family, 20 years younger than her eldest cousin, and we promised to accompany her when she entered university,” said an aunt. “Although we’ve been told that relatives cannot enter the campus during the pandemic, we decided to come with her to keep the promise. And we will come to visit the campus when it’s allowed in the future.”

Zhong said she had lived in a dorm in her high school, so she was not afraid of campus life. 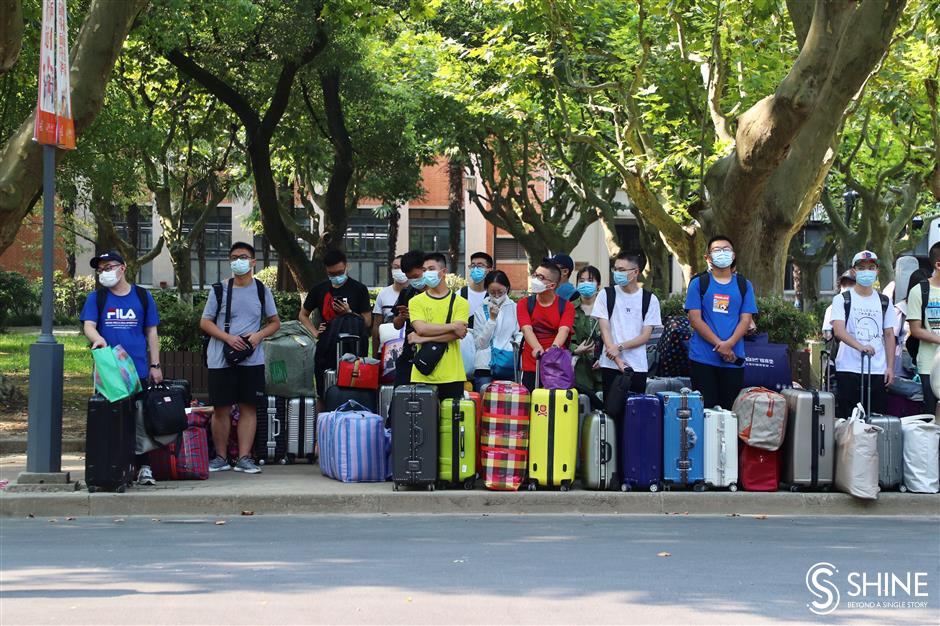 Students wait for shuttle vehicles to transport them to their dorms.

Zheng Liwei, another new student from Fujian Province, arrived with her mother with three suitcases, two sets of quilts and other items.

Volunteer Zhou Tao took Zheng’s luggage, put it on a trolley and walked her to the shuttle stop.

Zhou said he started work at 7am to welcome new students and help with their luggage.

“Yesterday we welcomed new postgraduates and I walked more than 30,000 steps between 7am and 1pm,” he said. “It’s tiring but I’m happy to be able to help them and ease their anxiety at the new environment and a new start of their life.” 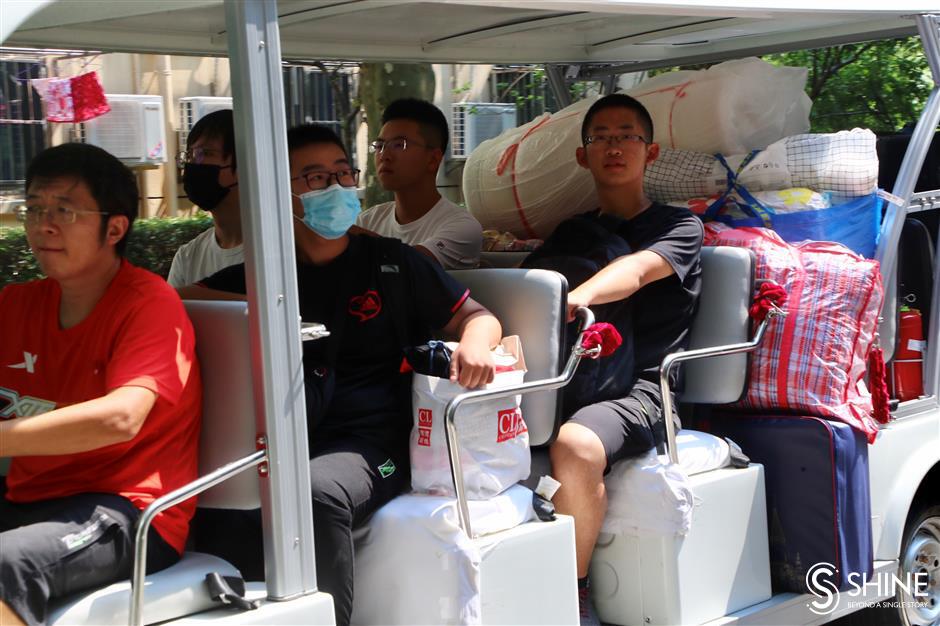 A total of 100 shuttle vehicles were on standby in Tongji.

In one dorm building, students registered at the hall to take their room keys and began to arrange their personal belongings and make their beds.

Liu Zheng from Hebei Province said: “My parents were worried whether I can look after myself. But I think it’s a good opportunity for me to learn how to live independently without their meticulous care.” 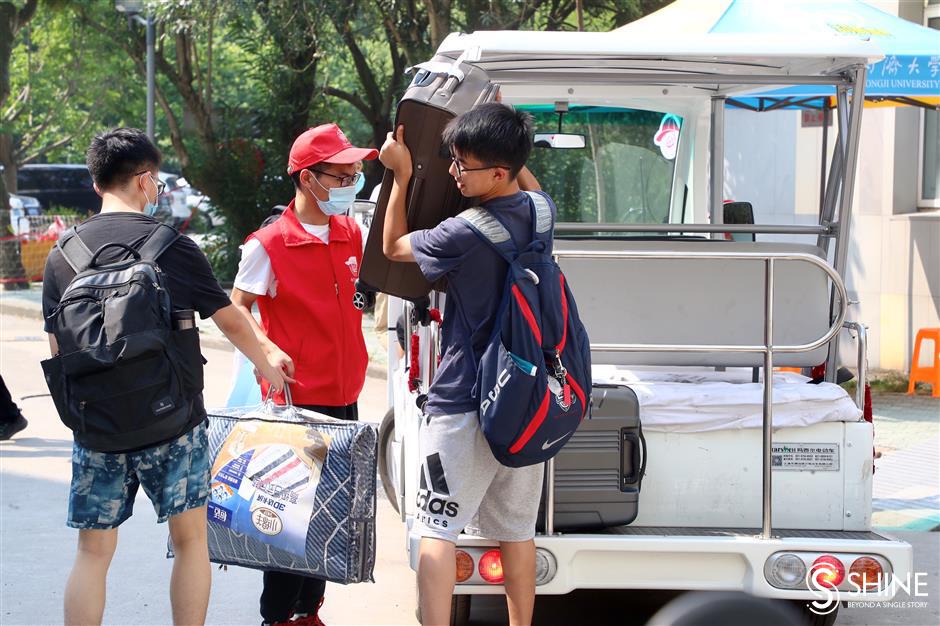 Students collect luggage from a shuttle truck as they arrive at a dorm building.

In another room, Jin Han from Anhui Province had already cleaned the room, made his bed and put his belongings in his closet. He only brought one suitcase and two small bags with him.

“I only brought some clothes and wash supplies,” he said. “All the other things can be bought here so I need not to bring them from home. I began living on campus since middle school years, so boarding life is not a big deal for me.” 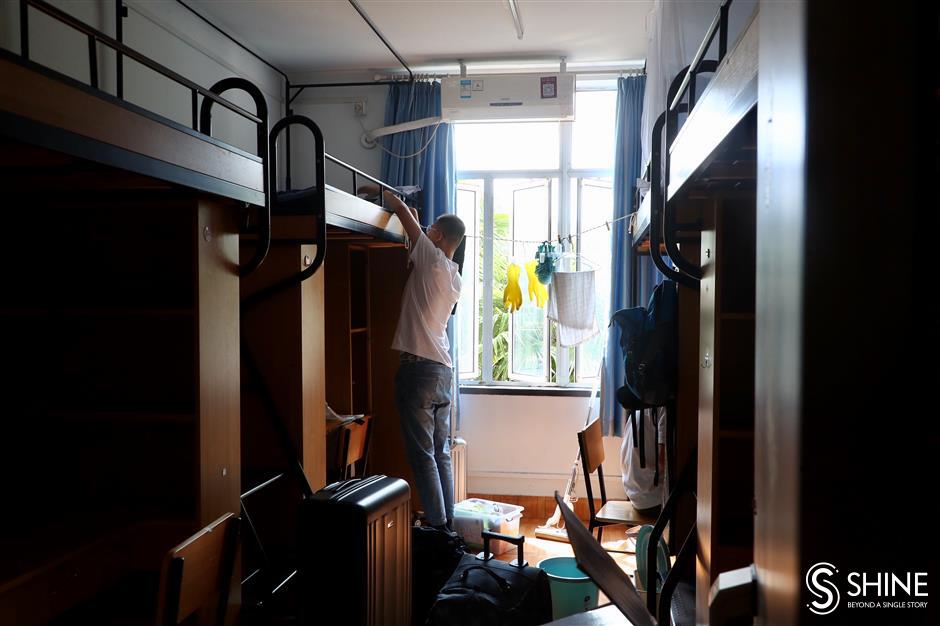 A student makes his bed in a dorm room.

“I think parents should learn to let go. There are 695 freshmen in the dorm, by now only one student came to me asking for help as he could not handle a mosquito net,” said Dong. “Last year, each student had at least two parents accompany them, and one had eight relatives come with him. They did all the things in the dorm and the children just watched. They should trust their children that they can do very well.”