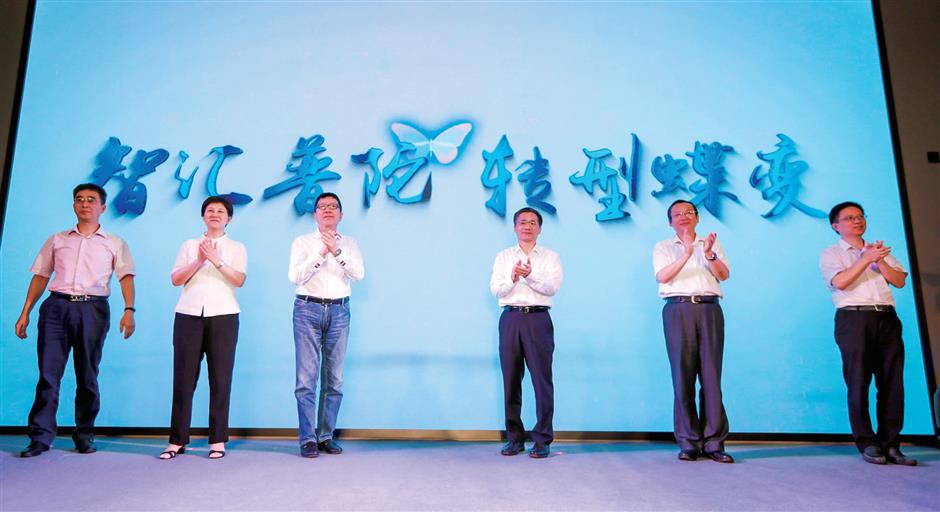 The 2020 Putuo Science Festival features a launching ceremony as well as sections on public welfare, scientific innovation, energy saving and many other things.

The 2020 Putuo Science Festival, held on August 23-29, featured public welfare, scientific innovation and energy-saving ideas, while an online festival ran alongside the fair to meet public fears amid the COVID-19 pandemic.

Among many things the festival showcased the role science played in the fight against the COVID-19 and the city government’s scientific innovation campaign. The online session promoted technology related to people’s lives, while enhancing public awareness and participation.

The opening ceremony was held at the China-Israel Innovation Hub in Putuo’s Taopu Smart City on August 24. Nearly 100 people attended the event, including top computer scientist He Jifeng, a member of the Chinese Academy of Sciences, as well as government officials, science promotion workers and children.

The opening session, hosted by Putuo District government, was organized by the district’s science commission and association, publicity department, health commission and the China-Israel Innovation Hub.

“The festival is expected to enhance communications, gather intelligence and share scientific achievements of Putuo with citizens,” Wei Jing, deputy director of Putuo, said at the opening ceremony.

The northwest downtown district is ambitious to become a hub for a global innovation cooperation, a cluster of multinational headquarters across the Yangtze River Delta region, a comfortable place for living and working along Suzhou Creek and a new-energy base for Shanghai’s scientific innovation center by 2025, added Wei.

There was background music made by artificial intelligence software and cellos, and performers recited a poem to tell touching stories during Putuo’s fight against the pandemic. Children presented flowers to famous scientists in Putuo-based companies and institutes, while a local kid’s troupe performed its award-wining operas to the attendees.

After the opening session, 10 scientists and company officials gave a TED-style lecture about their latest scientific products and achievements.

Hu Guibing, an official with JD Cloud & AI, introduced the new technologies used during the fight against the pandemic.

Putuo signed an agreement with JD Cloud & AI to help develop the downtown district into a digital economy leader in the Yangtze River Delta region.

The company under Internet giant JD.com will establish online sellers’ services and network operations at a digital economy industrial center in Putuo.

Aoshida, the East China headquarters of Shenzhen-based Orbbec, a unicorn enterprise in the AI industry, showcased its three dimensional visual technologies, while the founder and president of Celepixel released its self-developed dynamic vision sensor, which can help automated cars dodge obstacles in high-speed driving.

One of the highlights was the China-Israel Innovation Hub, which displayed over 30 high-tech products developed by 20 companies based inside the hub.

After entering the hub, visitors received a quick temperature check with the facial recognition and scanning facilities developed by Aoshida. A concierge robot from Tigorobot chatted with guests and guided them to various exhibitions.

He from the Chinese Academy of Sciences unveiled China’s first C-language test tool SmartRocket Unit, a key software to ensure safety on the subway, aerospace and in cars. 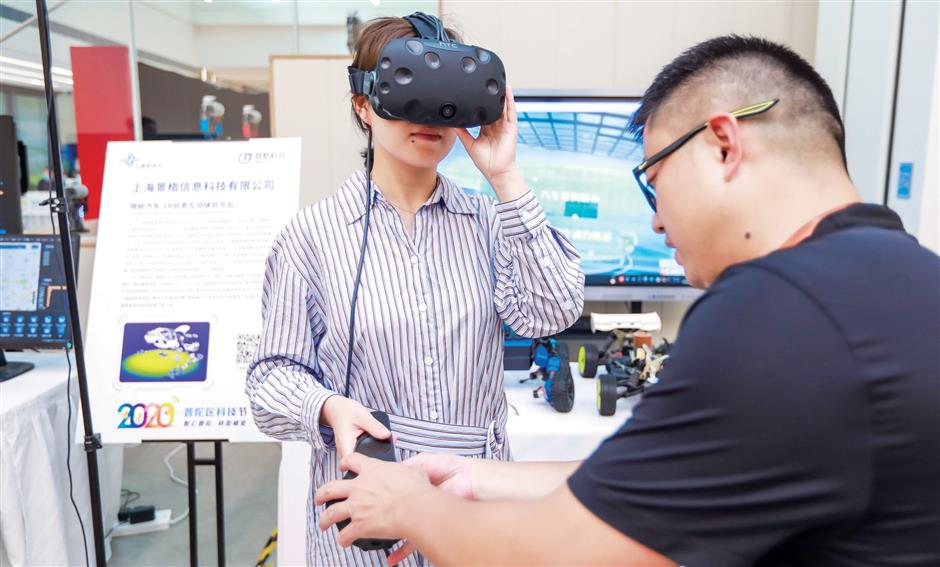 A visitor tries augmented reality technology via a headset during the Putuo Science Festival.

During lunchtime, visitors could order through a self-service machine developed by Shanghai Caifu, which has been widely used in Putuo communities to resolve dining difficulties for the elderly living alone.

Another robot developed by Chinetek IOT can check the health code, temperatures and identity cards of every guest to ensure safety during the pandemic.

Some cutting-edge chips were released on the opening day to showcase China’s chip development capabilities. Celepixel unveiled its visual sensor chip CeleX, while Shanghai Thinkforce released its latest product, TF16110, and a demo to display its functions to the visitors.

Putuo introduced the blueprint for the innovation hub, which was officially launched in December 2019.

Eight city-level science promotion venues opened to the public for free during the festival, along with a number of research institutes. They included: the Shanghai Textile Museum, Shanghai Research Institute of Chemical Industry and Shanghai Robot Research and Transformation Platform. The subdistricts and towns across Putuo launched over 30 popular science activities, which attracted over 30,000 residents.

A “science night” event for local families was held for children and their parents at the Shanghai Textile Museum, where various scientific experiments and small classes were availed.

Families were invited to select their favorite styles of hanfu (traditional Chinese clothing) and make them into bookmarks. They also learned to make a Chinese knot and tie-dye, a listed intangible cultural heritage of the country.

The final competition and forum of the “ICode” juvenile international coding contest was held at Shanghai Thomas School as a warm-up event for the festival.

Some 400 outstanding contestants showcased their talent on coding during the final competition. They were selected from over 30,000 participants.

To ensure safety during the pandemic, the online section of the festival featured a livestream on various activities, and talk shows of leading scientists.

Over 2.4 million online audiences witnessed livestream webcasts and interacted with the scientists