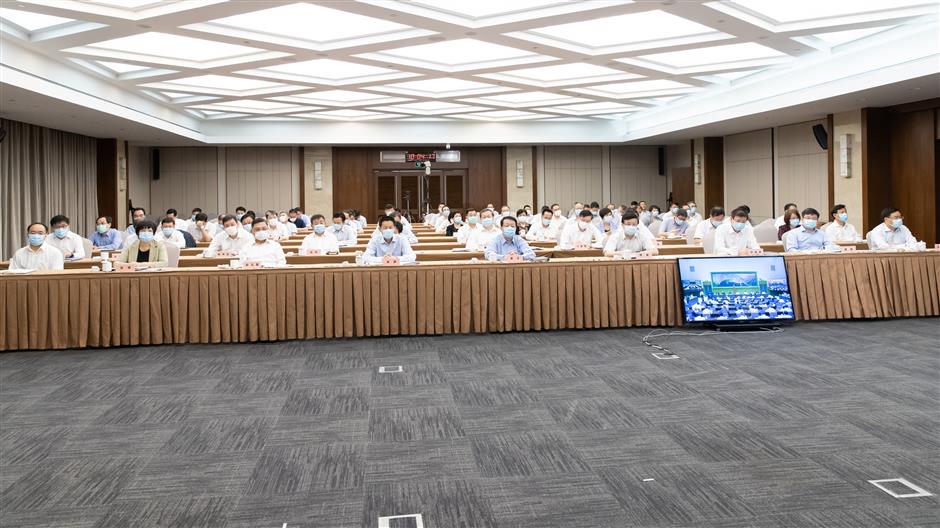 Shanghai Mayor Gong Zheng and other city officials at the video conference.

The conference hosted by the State Council, or the nation’s cabinet, asked to accelerate creating a top-level business environment, build power institutional engines to drive quality economic development, as well as keep elevating the city’s core competiveness and soft power.

The conference noted the regional government should focus on shifting functions, enhancing efficiency and optimizing the business environment.

The government should remove barriers for investors by further driving the approval and institutional reforms for major projects, such as the separation of certificates and business licenses as well as the delegation of power.

"The Tesla speed shall become the Shanghai speed," the conference resolved.

Tesla rolled its first cars off the assembly line just a year after groundbreaking for its mega-factory in the Pudong New Area. The practice is to be copied for all major construction projects across Shanghai.

The conference also asked to keep conducting tax reduction and simplifying administrative procedures to help companies get through this difficult period and gain more benefits.

Supervision during and after events should be further enhanced and regulated, while a new “Internet plus supervision” method should be developed.