A collection of antiques, ancient ink-wash paintings, calligraphy, ancient books, contemporary artworks and jewelry will be previewed on Friday and Saturday for Poly’s auction at Shanghai Yan’an Hotel.

The preview event will later travel to Shaoxing in Zhejiang Province and Shenzhen in Guangdong Province.

This year is the 15th anniversary of the opening of the Poly auction house.

Nearly 7,000 items will go under the hammer at the Poly auction, which will be held from October 13 to 20 at China World Summit Wing in Beijing.

The highlight of the preview is "Ten Views of a Lingbi Stone" — an ink-wash scroll created by Wu Bin, a master from the Ming Dynasty (1368-1644). Wu was noted for his landscape and Buddhist paintings. Despite being a royal painter, he had disdain for power, which is partly reflected in his paintings.

In 1989, this scroll first appeared at a Sotheby’s auction and fetched US$1.21 million.

Apart from the auction, a special exhibition of the scroll will be showcased from September 21 to October 7 at Poly Art Museum in Beijing, along with a series of seminars of this piece, the artist and other related subjects. 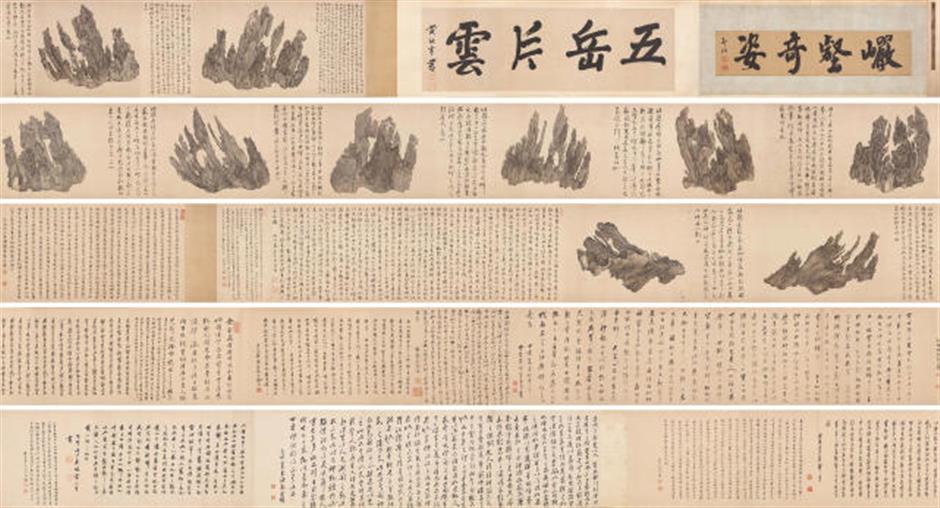 "Ten Views of a Lingbi Stone" created by Ming Dynasty master Wu Bin is the highlight of the preview.