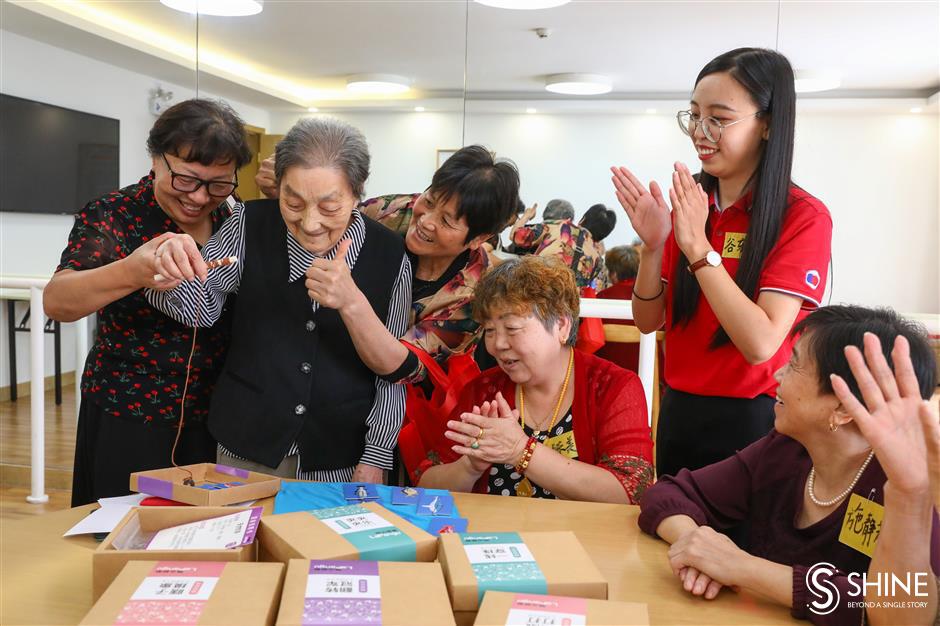 Playing games at the No. 3 comprehensive senior service center of Daning Road Subdistrict on Monday. 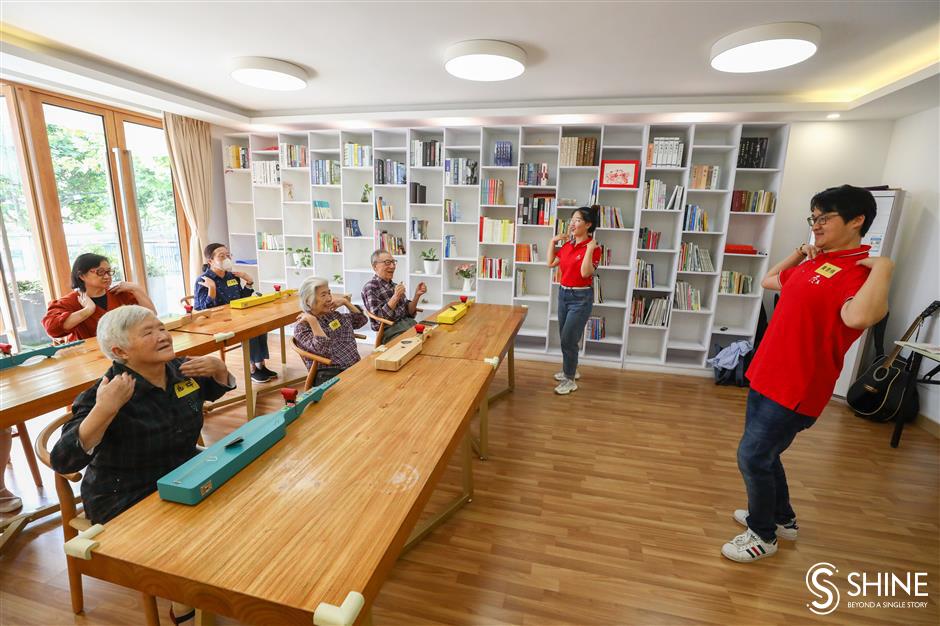 Music and movement at the center in Jing'an District.

Shanghai is to begin a trial of a second batch of friendly communities for senior citizens with cognitive disorders after the success of the first, the city's civil affairs authorities announced on Monday, World Alzheimer's Day.

By the end of 2025, a standard for the construction of such friendly communities will be released in Shanghai and most subdistricts and towns in the city will meet the criteria with efforts rolling out citywide, the Shanghai Civil Affairs Bureau said.

The trial of the first batch of friendly communities in 28 subdistricts and towns began a year ago, the bureau said.

The trial will last three years for each batch of friendly communities and a guideline has been released.

Financial support of 9.105 million yuan (US$1.34 million) has been earmarked so far, according to the bureau.

Twenty-seven subdistricts and towns in the scheme have established support centers totalling more than 8,000 square meters to create a friendly environment for elderly people with dementia.

"Medical treatment plays a role, but it is also important to create a proper and comfortable environment for these seniors," said Chen Yuebin, director of the senior work department at the bureau.

The centers use signs with bright colors that are easy to recognize and senior-friendly facilities to ease the confusion and concerns of the elderly, the bureau said.

"Many seniors and their families are not aware of cognitive disorders, ignoring early signs until seniors show behavior such as getting lost or even hurting others, which makes them miss the golden time of intervention to delay the dementia process in many cases," said Chen.

"Professional training can delay the development of cognitive disorders and lift seniors' living quality," he said.

Over the past year, senior care workers said there had been an increasing number of seniors with mild and moderate level of cognitive disorders they serve under the scheme, the bureau said. 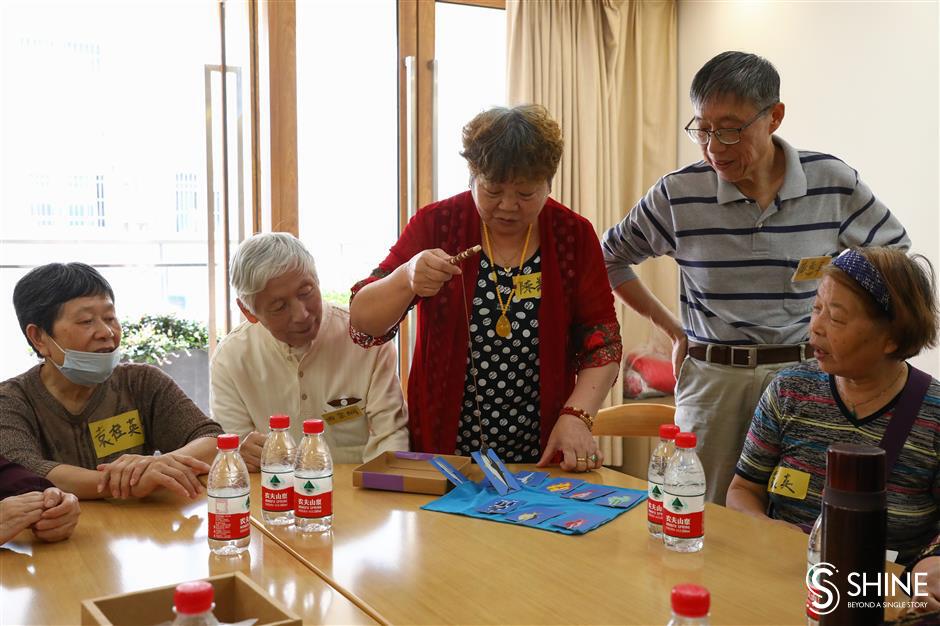 The subdistricts and towns have introduced non-medical interventions such as brain activation activities, music and art therapies based on the cognitive disorder level and habits of senior citizens.

Training in memory, language, logic, sensation and perception, and limb control can delay the worsening of the condition, promote seniors' social intercourse and keep them healthy psychologically, the bureau said.

Training and psychological support are provided for families who have remembers with dementia to ease their pressure and equip them with the skills needed to take care of them.

"Many seniors with dementia and their families have a sense of shame due to misunderstandings and prejudice, and these communities are disseminating information on dementia to raise awareness among residents," said Chen.

"Making people aware of cognitive disorders is important to eliminate such misunderstandings, and a friendly atmosphere is among the evaluation criteria of the trial," said Chen.

Science populartization is conducted at these subdistricts and towns to help the public establish friendly attitudes toward these seniors, the bureau said.

Although progress has been made, authorities also found some problems.

The capabilities of social organizations providing services vary, and some are not competitive enough in some professional services such as early intervention and family support, the bureau said.

It said it will deepen training in subdistricts and towns in the trial and social organizations.

Shanghai residents over the age of 60 comprise more than 35 percent of the permanent population. It is estimated that about 300,000 people in the city suffer from dementia and the figure is rising.

"Shanghai has a huge population of seniors with cognitive disorders, and we are calling for more attention and care for this group of people," said Chen. 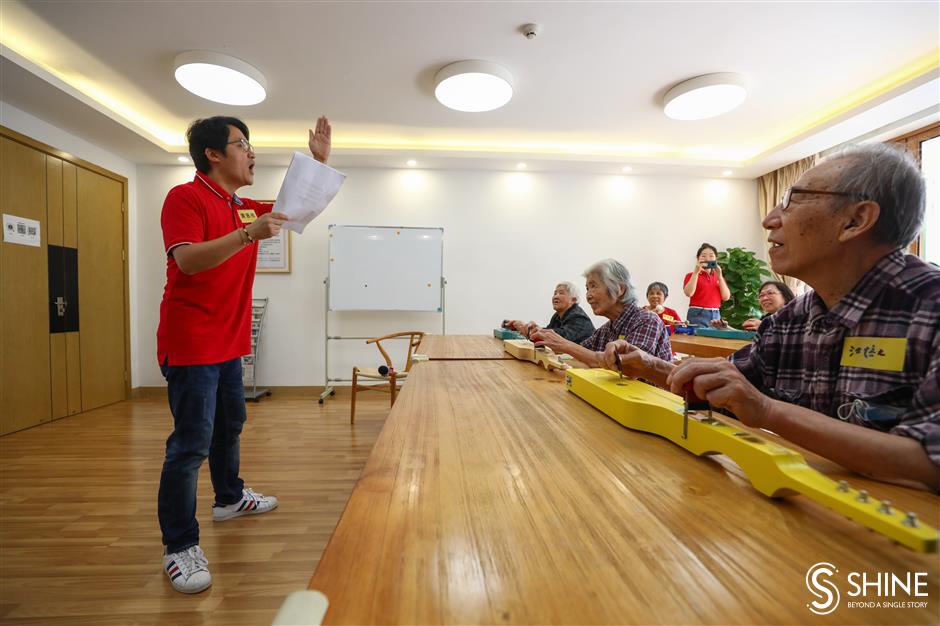 At the No.3 comprehensive senior service center in the Daning Road Subdistrict in Jing'an District, seniors with cognitive disorders were playing games and taking music therapy classes on Monday.

The subdistrict in the first batch of trial relies on Shanghai Jinmei Elderly Care, a social organization, to create a friendly community for these seniors with one-stop services such as early intervention, screening, knowledge popularization and training.

"My mother is 93 years old and she is happy here," Zhou Qiang said, watching his mom playing games at the center.

"She suffers from serious dementia and is looked after by three children in turn," he said. "We have an ayi to cook and clean for her, but she is lonely at home.

"Seniors are like children, and the environment here makes her open her heart.”

In another room, a group were experiencing music therapy.

"It is a fresh experience," Le Meifen, 83, told Shanghai Daily. She has been going to the center for a couple of years.

"I visit here very frequently as we can participate in diversified activities such as Huju Opera singing, dancing and knitting," she said.

"I have made a lot of friends here. I have a very poor memory, and the teachers are very patient when I fail to remember how to knit.

"It brightens my life," Le said.

A 70-year-old woman surnamed Chen who was suffering from dementia and had difficulty in communicating with others had kept herself at home and had become depressed.

At the subdistrict’s support center, she took part in a variety of activities and after six months her situation had greatly improved.