An artist’s rendition of the North Bund in Hongkou District after a new round of development.

Construction will start in early 2021 on Shanghai's third tallest skyscraper on the North Bund waterfront in Hongkou District.

The 480-meter landmark structure will echo the Lujiazui skyscrapers across the Huangpu River.

The new building will become the tallest structure in Puxi, surpassing the 320-meter-high Sinar Mas Plaza tower, the current tallest also on the North Bund and the third-tallest in the city, after the 632-meter Shanghai Tower and the 492-meter Shanghai World Financial Center in Lujiazui.

More than 10 companies from both home and abroad are negotiating with the North Bund to set up headquarters or offices in the new building, said Liu Jun, executive vice director of the North Bund Development Office.

Other key projects near completion on the North Bund include the city's third Raffles City mall and the city's first Broadway-style theater.

The mall which will open to the public next year will cover 120,000 square meters of shopping area with three stories above ground and two underground levels. It will feature the world’s trendy brands, entertainment and recreation sites, art space and boutique supermarkets, Liu said.

The theater, named North Bund SIIC Center, will finish its structure by the end of the year to cover a total of 240,000 square meters. It will feature a 2,000-seat theater which will mainly stage Broadway musicals to locals, he added.

The new-look North Bund, listed as a “new engine” of growth for Shanghai, will include a central business district with high-density office buildings and commercial facilities. The riverside region, covering about 4 square kilometers, will meet the same high standard already set at the Lingang Special Area and the Pudong New Area in the east of Shanghai.

These include dozens of top-level office buildings to house about 100 headquarters of multinational firms, international organizations and functional institutes, according to the Hongkou government.

Thanks to the new round of development on the North Bund, Hongkou has managed to reverse the economic slowdown since March amid the COVID-19 pandemic and achieved rapid growth on the financial, shipping and other sectors, said Wu Xinbao, the Party secretary of Hongkou.

"The growth rates of GDP and tax revenue of Hongkou in the first half of the year rank the top among downtown districts. The financial sector has increased by nearly 40 percent on year," Wu told a press conference on Sunday.

The shipping industry of the district, mainly based on the North Bund has reversed the loss since June and made an 8.9 percent increase on year in August.

Since the blueprint for the North Bund was publicized on February 20, the waterfront has attracted increasing global attention. A total of 171 projects have signed to base on the riverside region with total investment of 100 billion yuan, Wu said.

The district has organized an expert panel and a chief architect office to guide the development and construction of the site. A number of the world's top architects and urban planners have been appointed, while seven leading global architecture design institutes have been invited to take part in the development campaign.

Over 20 skyscrapers, including the 480-meter landmark, have begun soliciting design plans from across the world.

“Every building on the North Bund will be green and intelligent as well as  connected with each other,” Wu added. 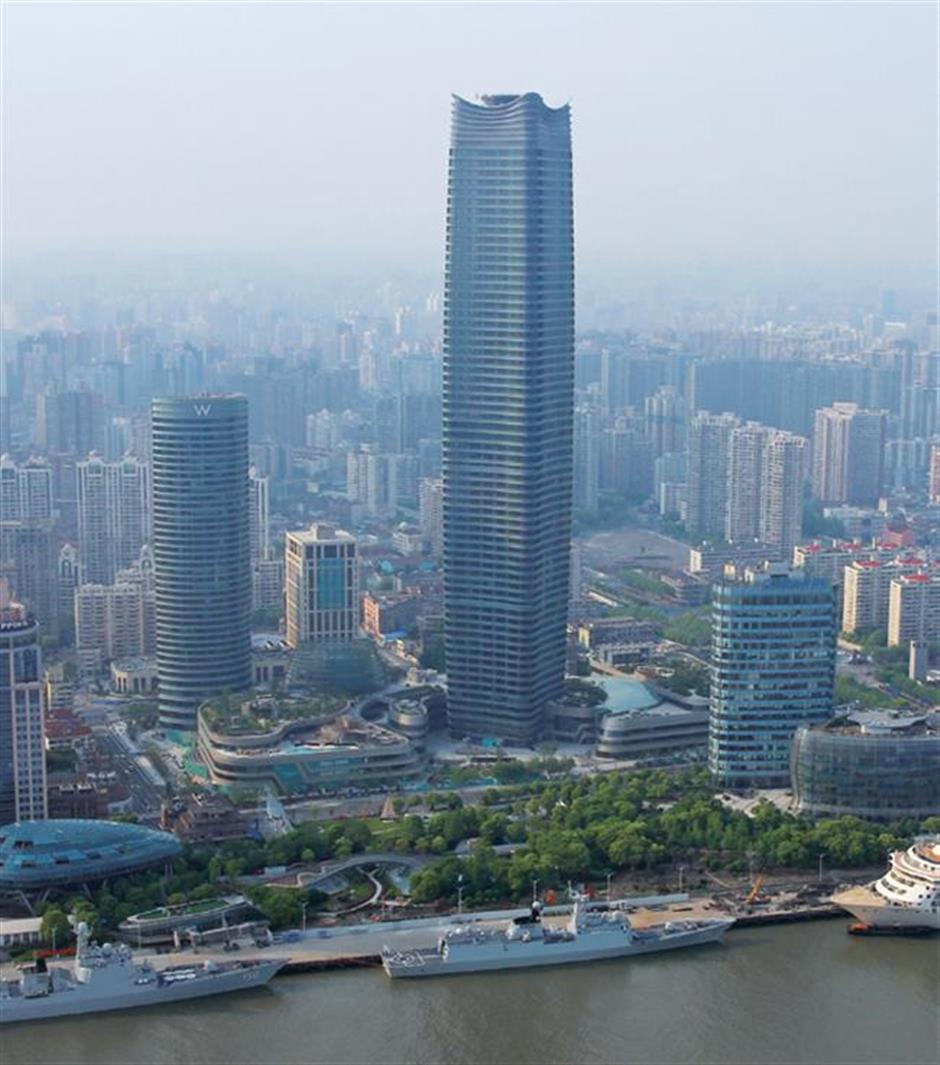 The 320-meter-high Sinar Mas Plaza tower, is currently the tallest structure in Puxi.