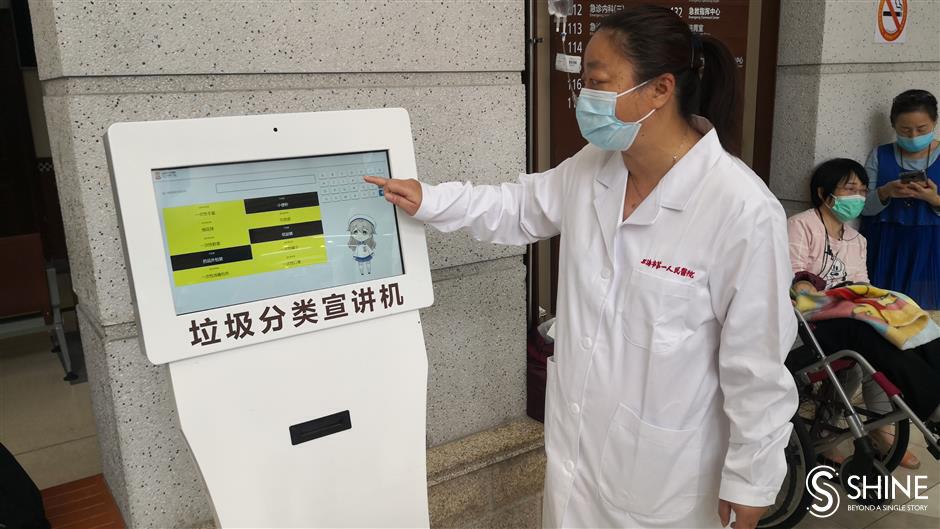 A staff member at Shanghai General Hospital demonstrates the use of a machine allowing people to check specific types of trash. 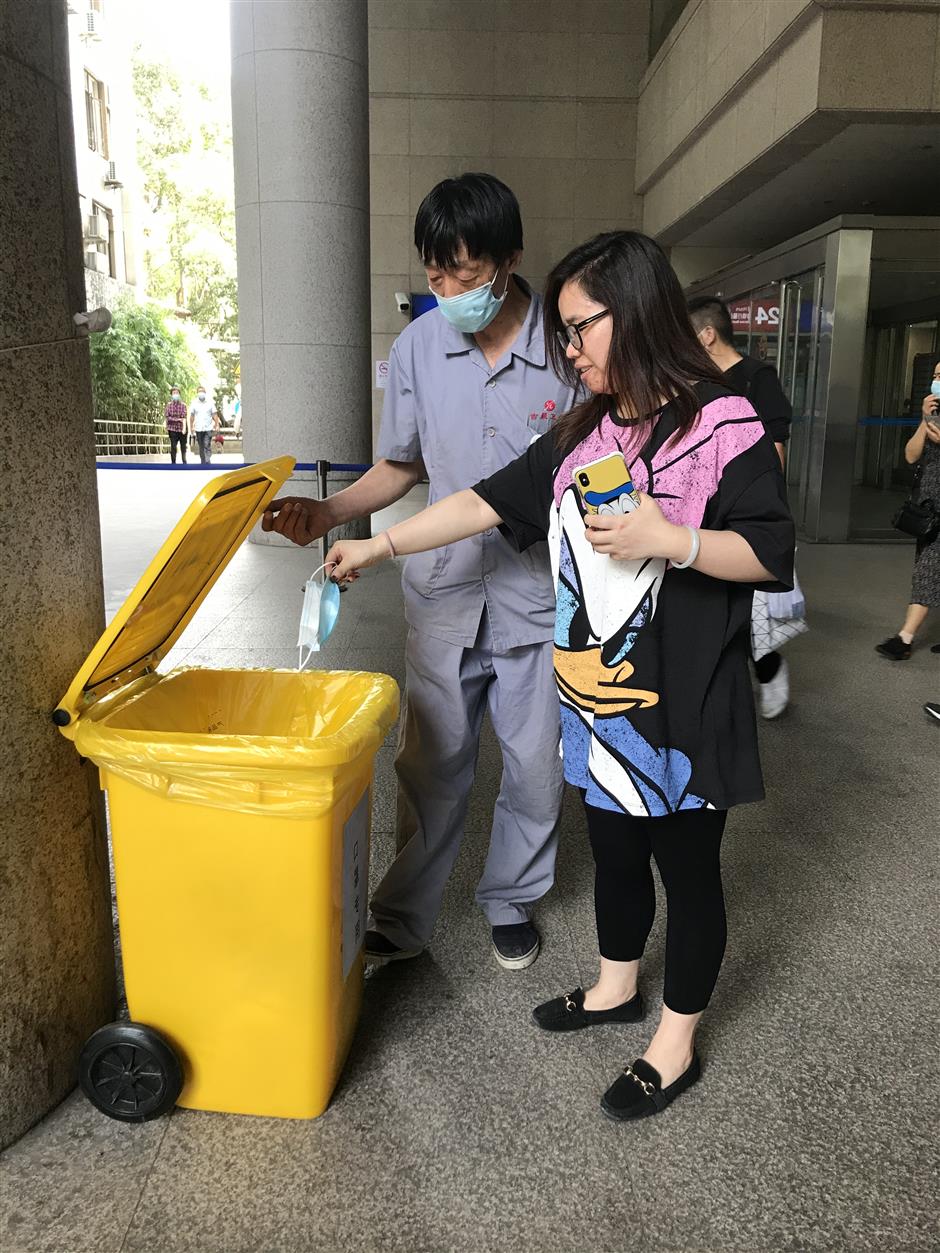 A woman disposes of a mask at Ruijin Hospital.

Shanghai's hospitals and universities have been taking innovative approaches in garbage sorting.

They used to be poor performers in Shanghai's trash-sorting campaign but efforts are underway to improve the situation.

"In the past, we spotted a large amount of domestic garbage such as water bottles and breakfast packages inside bins for medical waste," said the hospital’s Shi Hui.

It is difficult to constantly educate patients and families from across the nation in garbage sorting, and some mixed medical waste with household waste, the hospital said.

“It’s impossible to dispose such garbage in the containers due to their slot design, tackling the problem effectively," said Shi.

The containers are placed near blood test windows where cotton balls are used more often, she said.

"We need to empty the containers four to five times daily because they are full quickly," she added.

The hospital also has a blue container for used face masks. The slit blocks other trash from being disposed of.

"We found most trash inside the container are used masks," said Shi.

The container has an ultraviolet sterilization function. 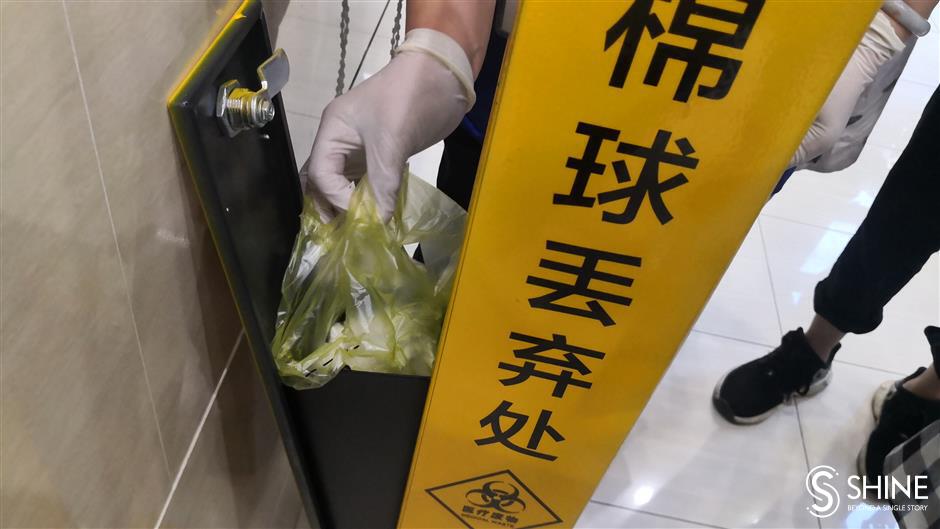 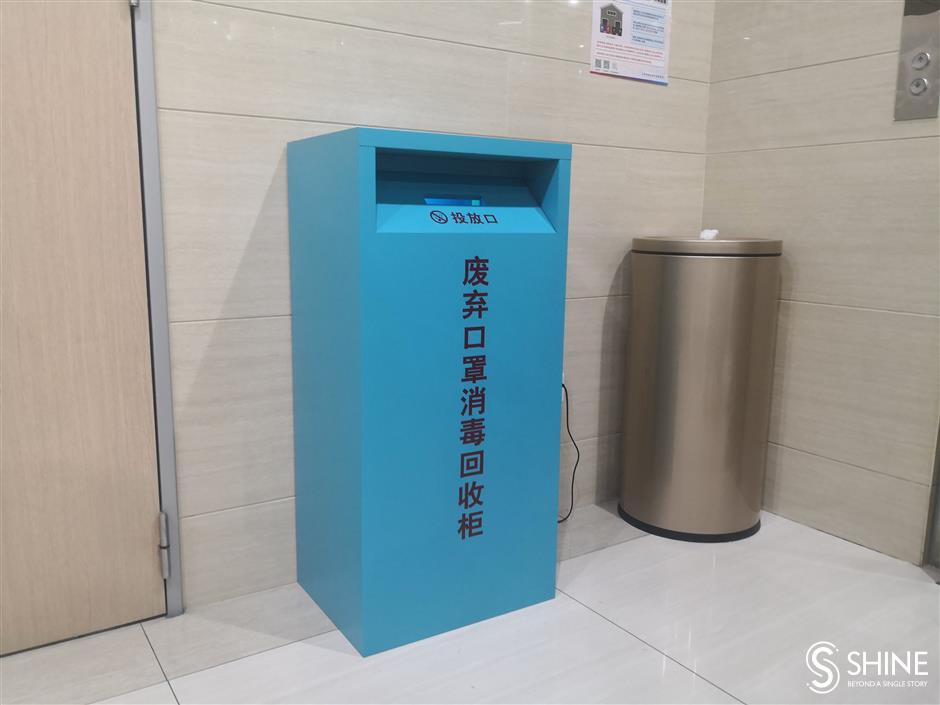 Patients being admitted are given a notice informing them of the garbage-sorting regulations.

At the entrance to the hospital, a machine enabling patients and their families to check the categories of different kinds of trash to raise their awareness.

The hospital has built a new site for sorting and placement of domestic garbage, and it has introduced a garbage compactor to compress dry trash to avoid contact with cleaners and curb pollution.

At Ruijin Hospital, cleaners carefully record the dates of trash collection and sources of garbage, pasting a note on each bag of trash.

"We have conducted training involving about 110 nurses and 170 workers, and distribute garbage-sorting promotion materials to hospitalized patients who come from all across the nation to help people from outside Shanghai to be aware of the city's trash-sorting regulations," said Shen Yiping, deputy director of the general affairs department of the hospital.

As a result, the amount of dry garbage dropped to 10,000 kilograms from 13,750 kilograms a day at the hospital. 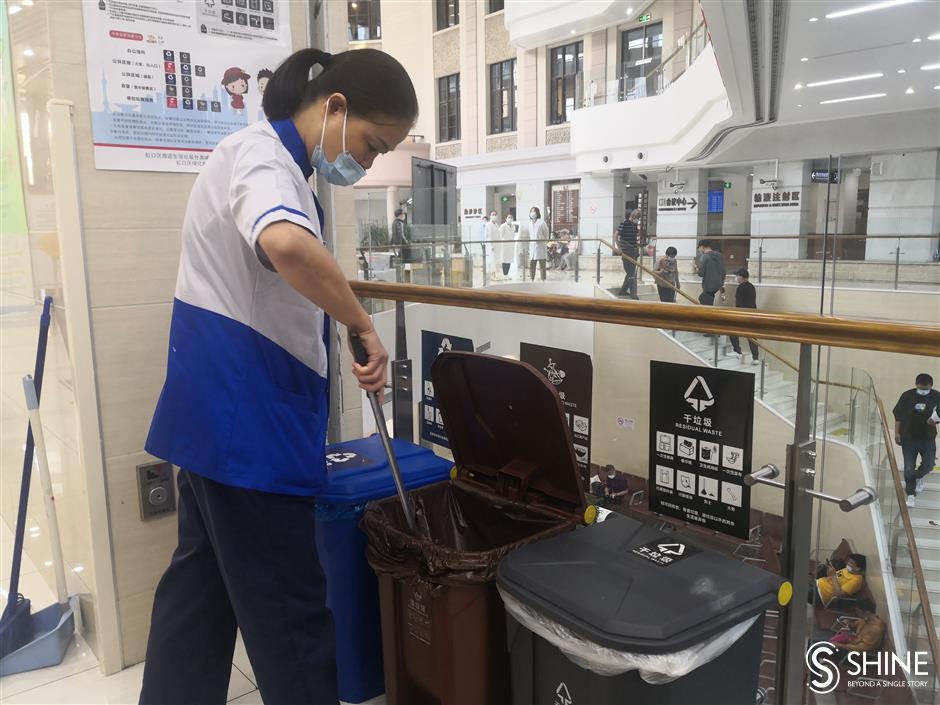 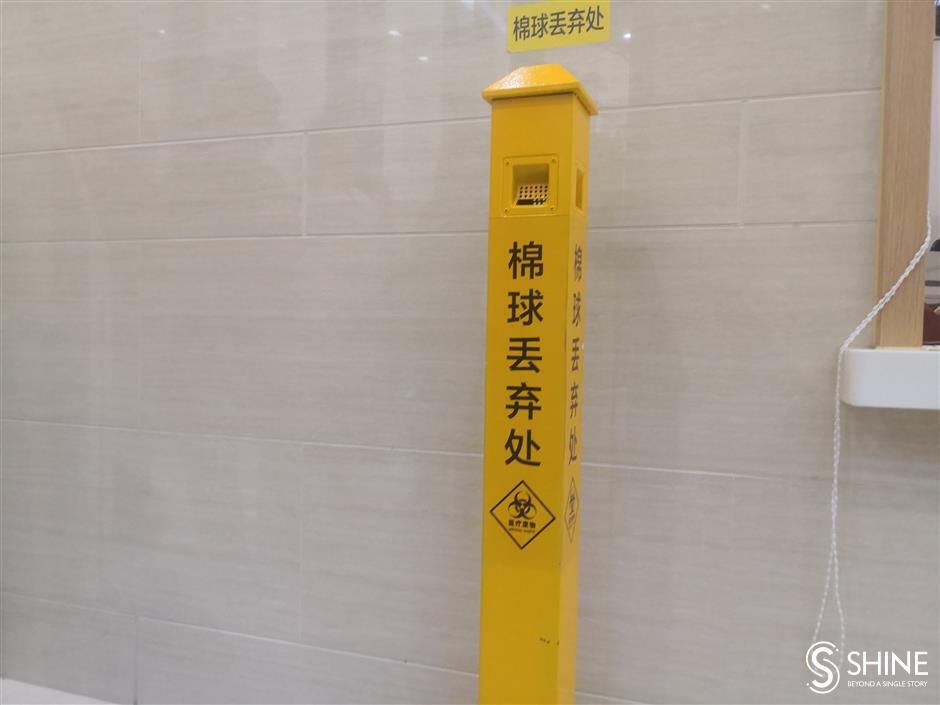 At Shanghai Jiao Tong University's Xuhui campus, garbage disposal spots have been installed with ultraviolet disinfection, spray and deodorization system to tackle bacteria and odors. Students and faculty members can dispose of trash three times a day. There are volunteers and surveillance cameras monitoring the disposal process.

Every freshman received a guidebook on waste sorting when the autumn semester started, with an English version this year for the first time.

"Our students come from across the world, thus we publish the guideline to raise their awareness on garbage sorting," said Lu Qi of the university’s general affairs center.

"Most students do a good job, but it is not always correct, and it takes time," said Lu.

Dormitory buildings with the best performance in trash sorting are announced monthly to encourage students to get involved.

Students are also able to win specialties from Eryuan County in Yunnan Province by uploading photographs showing their empty plates after meals.

Zhang Jin is a volunteer guiding garbage sorting at the university.

"If students are spotted with frequent violations, they will be identified and educated," said Zhang. 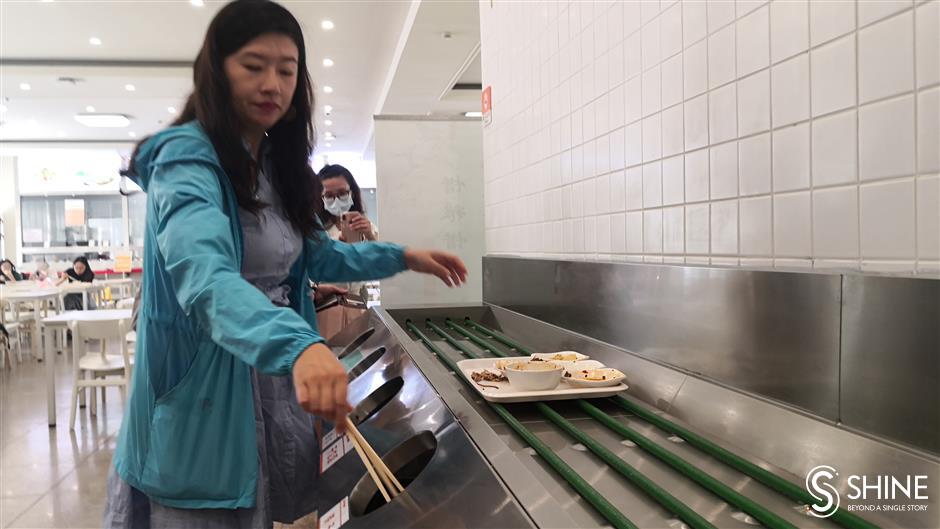 A woman clears up after her meal at Shanghai Jiao Tong University's Xuhui campus. 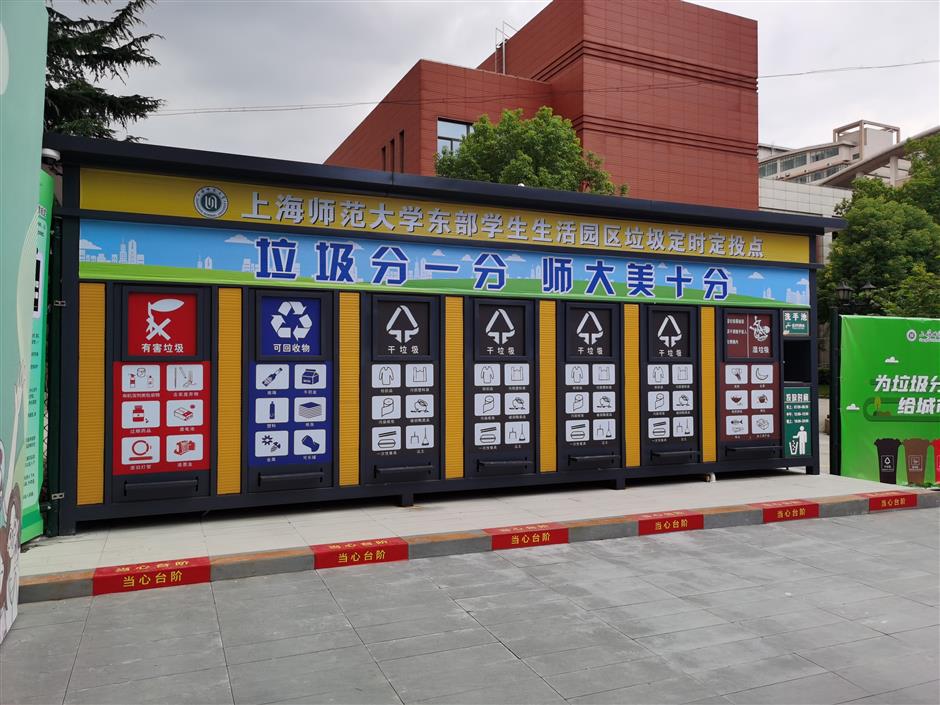 It has set up a garbage sorting experience pavilion showcasing the art and scientific innovation works of students.

A sitcom by students and posters makes trash sorting no longer boring.

"It is my first time to get involved in garbage sorting when I arrived in China because in Russia we don't sort garbage, and I keep learning," said Malysheva Anna, a postgraduate student.

"It is not complicated and difficult if you keep it in mind," she said.

Zhang Xu, an official with the Shanghai Education Commission, said it assesses on universities' performance in garbage sorting monthly and the results are made public.