Yasuteru Hirai, chairman of Mitsubishi Corporation China, was honored as an Honorary Citizen of Shanghai on Monday for his contributions to the city.

Shanghai Mayor Gong Zheng presented him with a medal and certificate.

The award is the highest in acknowledgement of foreigners in Shanghai.

Gong said the honorary citizenship represented the inclusiveness of Shanghai and was also in recognition of expats’ contributions to promoting the city’s development.

Since 1997, 45 expats have become honorary citizens of Shanghai.

Hirai, 59, said Monday was his birthday and the honor was the best birthday gift he had received.

“I feel honored to have received the Magnolia Silver Award in 2014, the Magnolia Gold Award in 2017, and the honorary citizenship today,” he said. “I always feel that there is more for me to do for Shanghai and the highest award in Shanghai has brought me a sense of mission to do better in my job and make more contributions to the city.”

Hirai began promoting Mitsubishi’s business in China soon after he joined the company in 1984. Under his leadership, Mitsubishi Corp China moved its head office from Beijing to Shanghai in 1995.

He has also contributed his knowledge in promoting green and strategic emerging industries in Shanghai and sponsored activities for autistic children.

After the COVID-19 outbreak, Mitsubishi donated more than 200,000 masks to China and he returned to Shanghai to lead the resumption of the company’s work, including pushing forward the establishment of a chemical research and development center in the Shanghai Hangzhou Bay Development Zone in Fengxian District.

Hirai said he loves the city, its life and culture.

“Shanghai is an ideal place for foreign businesses with explicit policies and high government work efficiency,” he said. “Meanwhile, the government is willing to communicate with foreign businesses like Mitsubishi Corporation to find out what needs to be improved and solve found problems efficiently, which is one of the biggest advantages of Shanghai in terms of business environment.”

“There are so many galleries and museums in Shanghai and they have frequent exchanges and cooperation with their counterparts around the world to bring cultural enjoyment to Shanghai residents including me,” he said. “I will definitely continue to work and live in the city in the following years and wish to make a lifelong contribution to the city.” 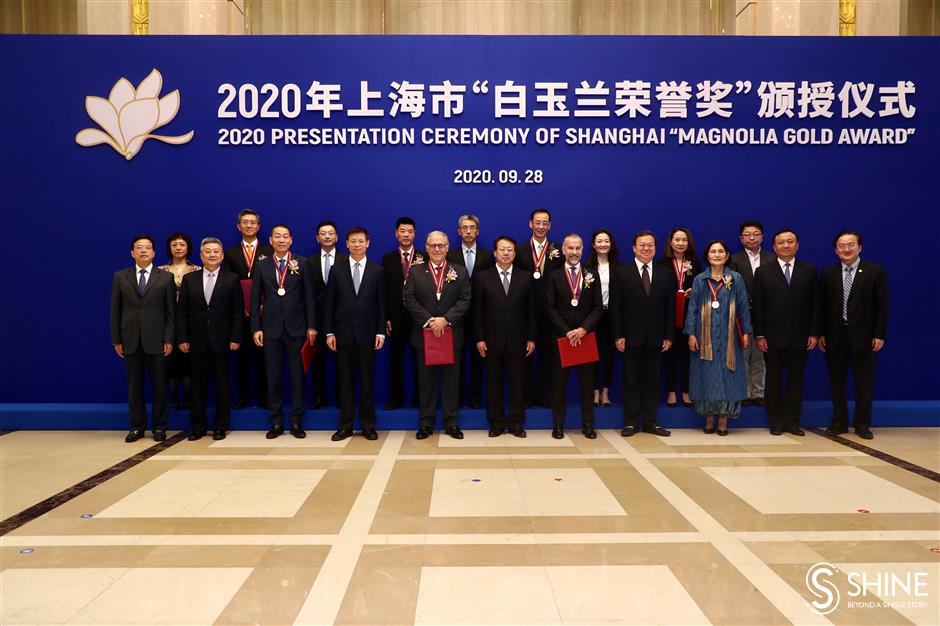 The winners of the Magnolia Gold Award pose for a group photo with Shanghai officials.

The city also presented Magnolia Gold Awards to 10 expats from Spain, Japan, Canada, South Korea, Brazil, the US, the UK and France. They come from fields including trade, finance, services, science, health care and culture.

Since 1992, 342 foreigners have received the Magnolia Gold Award.

Gong presented the medals and certificates and Xu Kunlin, vice mayor of Shanghai, on behalf of the city government, thanked them for their contributions.

“All the recipients of the award represent the best of the best in their own industry. One thing in common is that many have been living and working in Shanghai for a lot of years and become good friends of the city,” he said. “The outbreak of COVID-19 has caused a lot of disruption to everyone’s life, I would like hereby to thank the award winners and the foreign community for working with us to contain the pandemic.”

He said Shanghai was continuing its reform and opening up and was going all out to become a global center for finance, trade, shipping and scientific innovation. 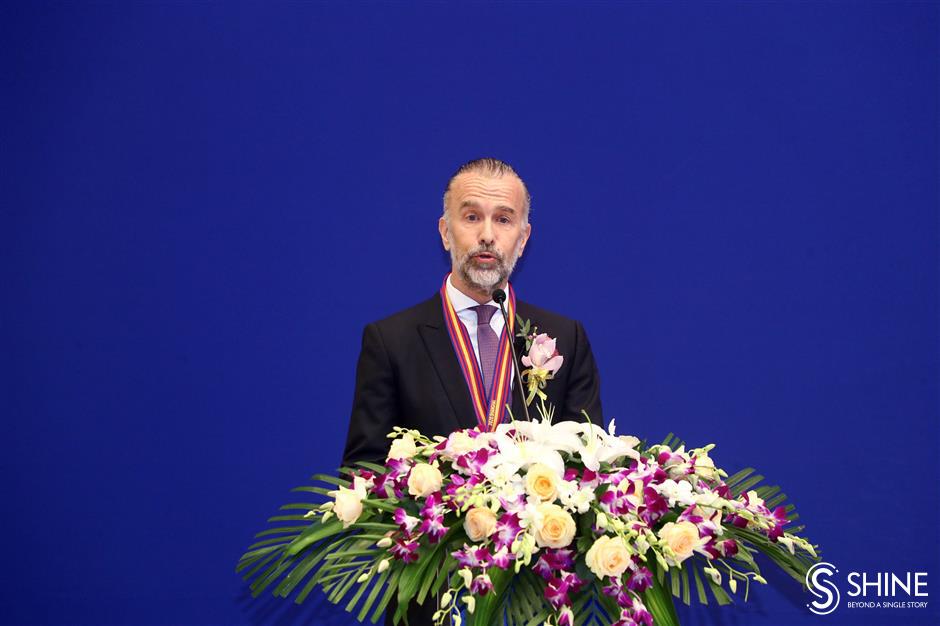 Francisco Javier Gimeno Alcala, the Spanish CEO of Asia-Pacific of French multinational Saint-Gobain Group, delivered a speech on behalf of the recipients.

“All of us feel extremely honored by the great recognition that the city of Shanghai has so generously awarded us,” he said. “You have welcomed us with open arms, by creating excellent business and life conditions. After so many years working and living here, each of us has developed a very vital and sentimental relationship. Definitely, we all feel Shanghainese. Shanghai is our city, and we are part of this place. There is nothing more natural than working hard for the city that you love.”

Gimeno was honored for promoting economic development and innovation in the city, as well as exchanges between China and France.

Gimeno, his wife and two children have lived in Shanghai for 10 years.

“Since our arrival in the fall of 2010, we have witnessed the amazing acceleration of the transformation of the city. In the years after our arrival, Shanghai has become a global benchmark in terms of social vitality, business dynamism and collective and individual creativity,” he said.

He added: “We have no doubt that the future of Shanghai will be brilliant. The city and its leaders are determined to make quick progress on the path already initiated of the green and the digital revolutions. You are fully committed to speed up in the profound transformation process of the economic model of China, by giving the first priority to technology, innovation, education and creativity.”

Gimeno was in Europe when coronavirus happened but returned on January 31. He and his company had gone through some difficulties but business was now back to normal thanks to how the Shanghai authorities had managed the crisis, he said. The company didn’t lay off employees or reduce their pay during the pandemic. None of its employees were infected.

“The way the sanitary crisis has been managed and the virus defeated has just been exemplary, a model from which many countries should learn,” he said.

He said he and the other award winners would continue to work vigorously with the Shanghai people to further contribute to the success of the city and happiness of residents. 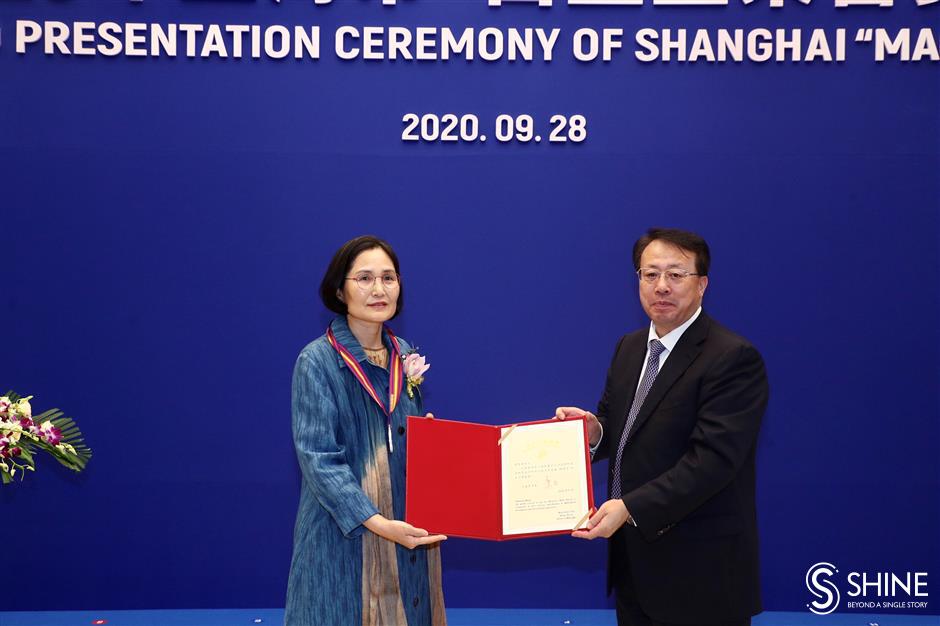 Wonsook Hong, a traditional Chinese medicine physician at the Minhang TCM Hospital, is presented with the Magnolia Gold Award.

Wonsook Hong, a traditional Chinese medicine physician at the Minhang TCM Hospital, said Shanghai was now her home as she has lived here for 27 years, longer than the time she lived in South Korea.

“I’m so grateful that the Shanghai University of Traditional Medicine and its affiliated hospitals have trained me so well and now the government grants me the Magnolia Gold Award,” she said. “It’s a recognition of my previous work and also a driving force for me to work harder in the future.”

Hong was honored for her efforts in the integration of traditional Chinese medicine and Western medicine and promoting exchanges between China and South Korea in education and research in traditional medicine. She bought 6,000 masks in South Korea when the pandemic broke out and donated them to Shanghai.