A pathway to fresh air by way of elevators 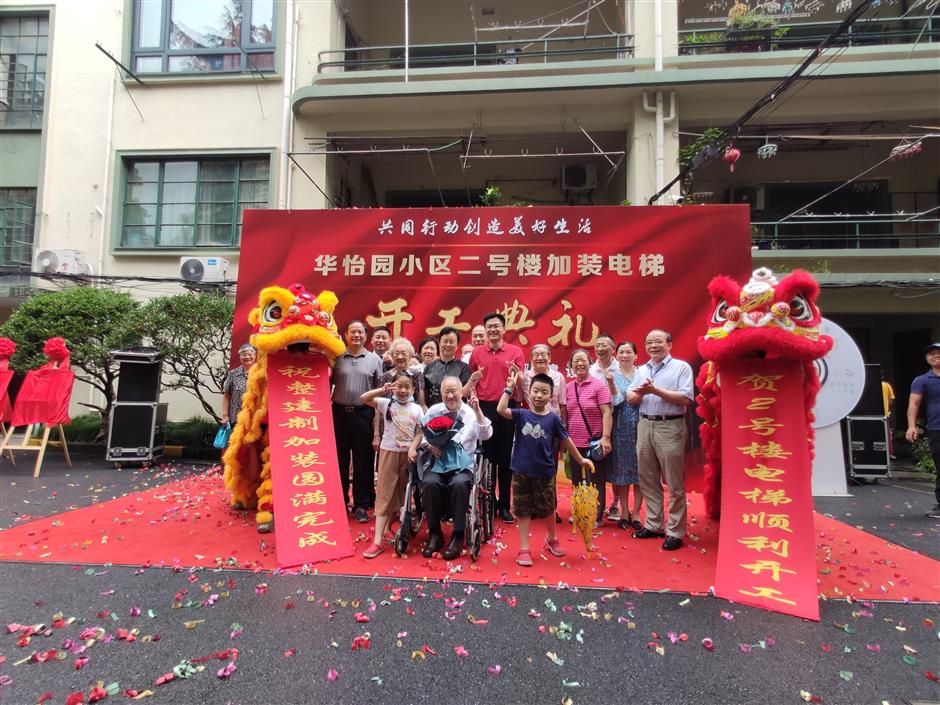 Residents of Huayiyuan neighborhood in Jing’an are excited to have an elevator installed in their building.

Zhang Juntao’s 94-year-old mother is counting the days until she can go outside. She has been staying in her home on the fourth floor of her building in Jing’an’s Huayiyuan neighborhood for more than 6 months, because it’s challenging for her 72-year-old son to move her.

Last month, workers began installing an elevator in her building, which should be completed in two months.

“I’ve told her she’ll soon be able to go outside to breathe the fresh air — she’s so excited,” Zhang said. “Actually, all of us are looking forward to it. Many of her neighbors are in their 70s and 80s, and some have trouble walking by themselves just like my mother.”

Zhang’s mother’s building has six floors and is the last of the four old buildings in the neighborhood to have an elevator installed.

“We were envying those living in other buildings,” Zhang said.

“At first, one of my mother’s neighbors didn’t want an elevator installed because he was afraid it would make too much noise. Neighborhood officials very patiently persuaded him to change his mind,” she added.

It took a year to install an elevator in the second building, but at least two years before elevators were installed in the third and fourth buildings, according to Ge Jun, a subdistrict official.

“Over the years, we have gotten better at persuading residents, who have become much more cooperative,” Ge said.

Sun Shoujuan, 84, lives in the third building. She’s happy her friends can enjoy the convenience of having an elevator.

“I moved here in 1954 with my husband,” Sun said. “Around 2006, we moved out because my husband had issues with his lungs and couldn’t climb the stairs.”

The elevator in the third building was completed in 2017, but Sun’s husband had already passed away.

“I felt so lonely living in a strange neighborhood after he passed away,” she said. “When I heard about the elevator installation, I immediately moved back. Here, I can be with my old friends and neighbors. I’ll never leave again. It’s where I’ve spent most of my life.”