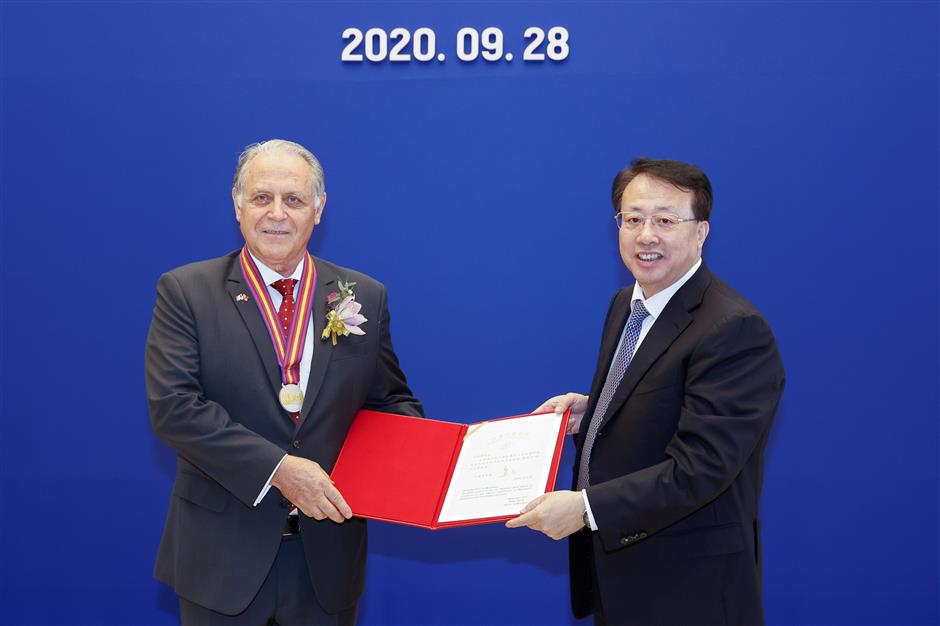 Fernando Arenzana is honored with this year's Magnolia Gold Award.

Fernando Arenzana immediately canceled his vacation in France when he heard about the COVID-19 epidemic in China early this year. He risked flying back to Shanghai and joined local efforts in the anti-virus battle.

As the scientific co-director of Institut Pasteur of Shanghai (IPS), Chinese Academy of Sciences, the 66-year-old Spaniard led research in diagnostics and detection of the viral genome as well as development of vaccine and therapeutic antibodies.

Led by him, IPS launched cooperation with domestic hospitals and other Pasteur institutions in France and Laos. It participated in Europe’s Horizon 2020 project on coronavirus research, a breakthrough in China’s involvement in the world’s major biological research.

His contributions to the city’s development won him this year’s Magnolia Gold Award, after a silver award in 2018.

“It’s certainly a great honor for me and for my institution to be awarded with this prestigious and competitive award,” Arenzana said. “I believe that beyond my personal contribution, this prize acknowledges the work accomplished by the Institut Pasteur of Shanghai in the life sciences, and in particular the fight against infectious diseases, for the health and wellness of citizens and the international projection of Shanghai as a capital of innovative and cutting-edge science and technology.”

IPS is engaged in a broad range of research programs ranging from viral hepatitis and HIV, to respiratory infections and virus-induced cancers. After Arenzana became co-director in 2015, more emphasis was put on improving preparedness against infectious diseases and response to epidemic outbreaks.

According to him, Shanghai is a fascinating place where he has found multiple opportunities to collaborate with others.

“Shanghai hosts very important research teams of international projection and even world leadership in many fields of life sciences,” he said.

Over the years, he has been dedicated to the integration of the IPS into global science and technology systems in Europe, and effectively pushing cooperation between IPS and Chinese scientists to Southeast Asia and Africa.

His family lives in Shanghai, and they are fond of the city.

“We lived in cities like Paris in France or Seville in Spain, that have original souls. Shanghai is that kind of unique city and features many fascinating and attractive assets,” he said.

One charming aspect of Shanghai, according to him, is the marvelous mix of local flavor and international style. He likes walking with his wife in old downtown neighborhoods to explore the city’s vibrant history and culture.

“We are passionate of art. My wife is a professional in that domain, and we are particularly interested in Art Deco, a style born in France and adopted by Shanghai. Everybody knows Shanghai is, with Paris, the home to one of the richest collections of Art Deco architecture in the world,” he said.

He added: “We are also very attentive to the cultural life in the city and we have a number of Chinese friends with whom we’ve learnt much. Traditional opera is one of my favorite entertainments.”