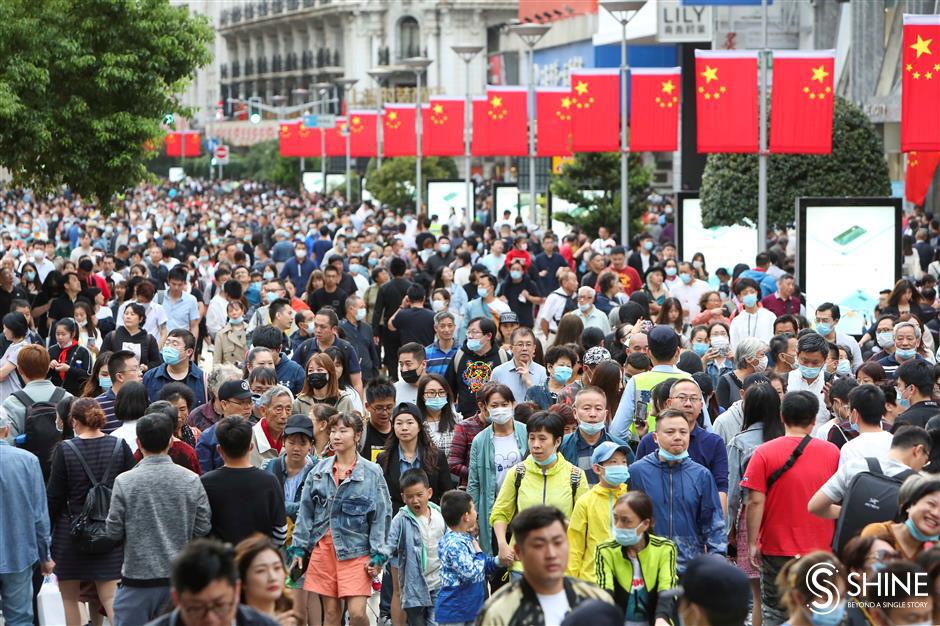 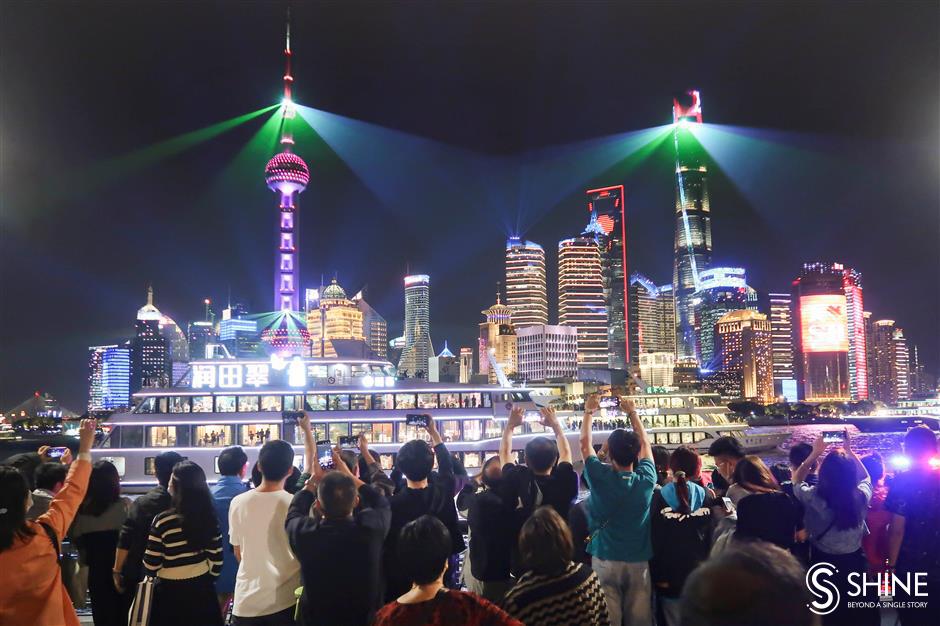 Camera phones at the ready to capture the scene at night from the Bund during the holiday. 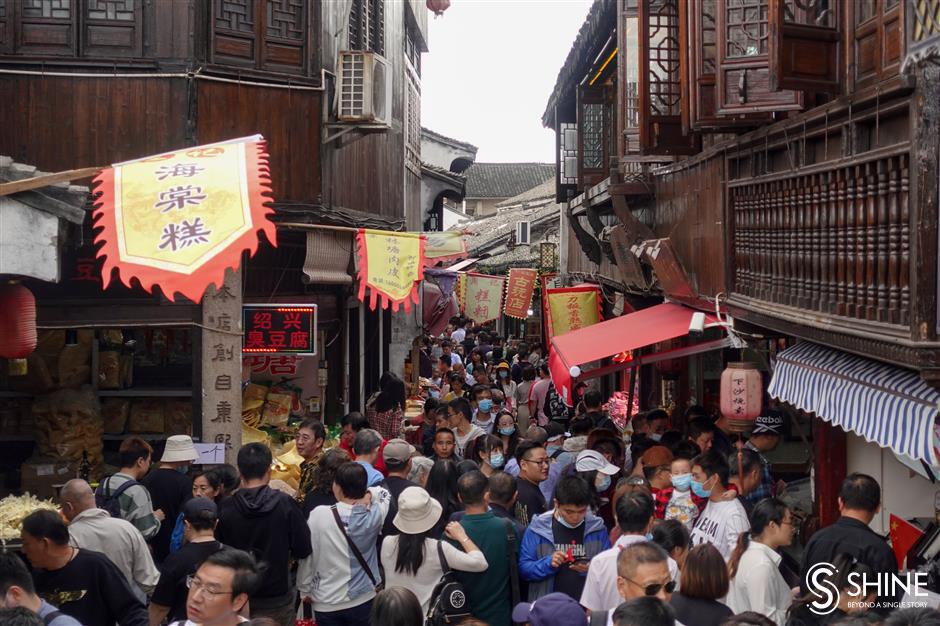 Xinchang Ancient Town is one of many popular holiday attractions.

The first National Day holiday after the COVID-19 pandemic hit the tourism industry saw a return to optimism and recovery with crowds of Shanghai residents back again at attractions across the city.

Unable to travel far, they have been exploring the hidden beauties of the city at their doorstep.

"I used to think that the city is too familiar to me, but when I started searching for some fun places to spend the holiday, I found it is not that familiar as I think," said Wu Yu, a Shanghai resident in her 30s.

"They are many new interesting options to explore,” Wu said.

"I visited the newly opened Guangfulin Archaeological Site Exhibition Hall and the Qingxi Countryside Park with my husband, and they were both surprising fun journeys," she said.

"The exhibition hall offers a glimpse into the life of our ancestors, and the Qingxi park's tranquil beauty is impressive.” 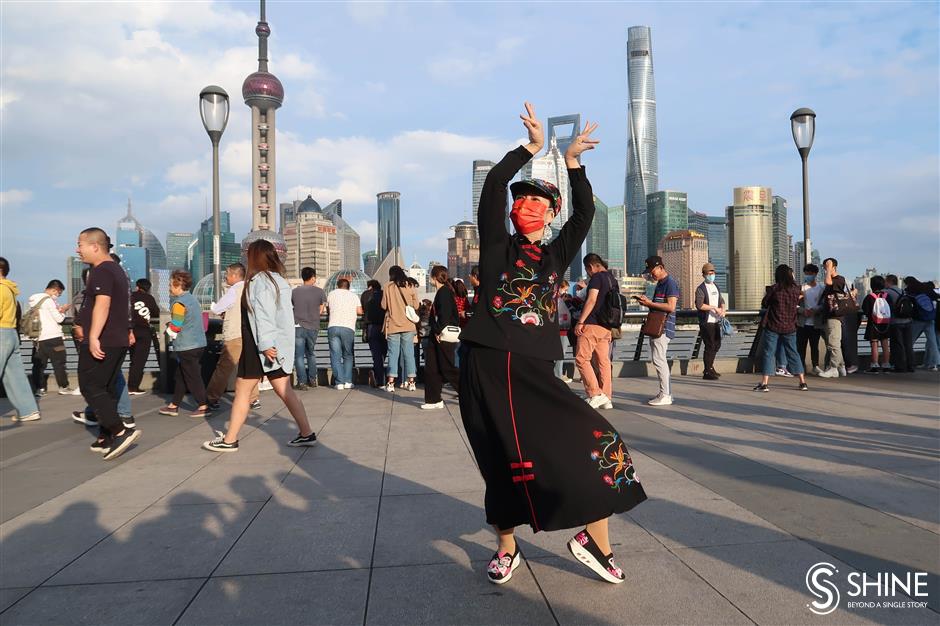 The weather's right for dancing on the Bund during the holiday. 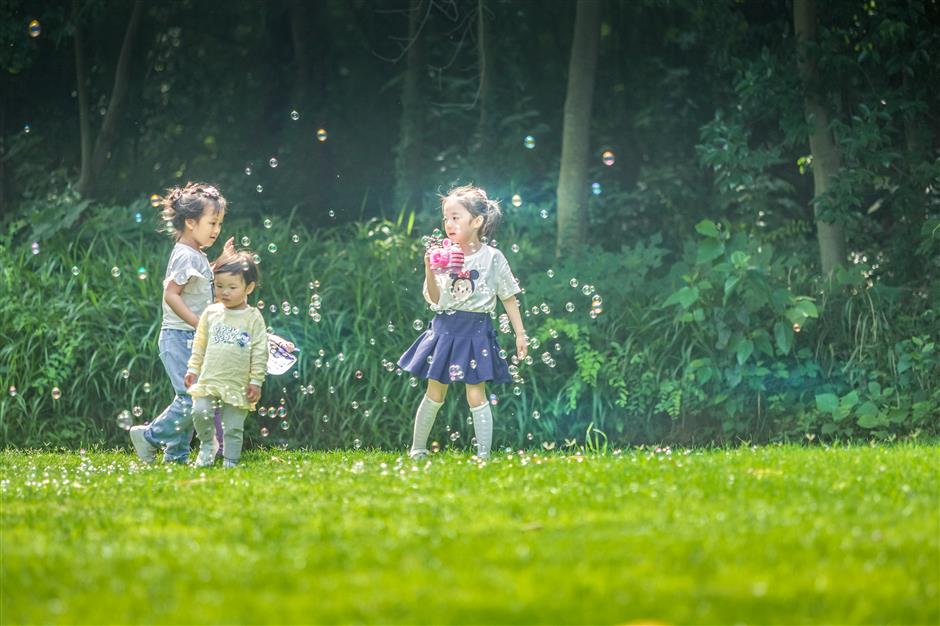 Children have fun with bubbles during their visit to Chenshan Botanical Garden.

Hu Yingying, mother of a boy at primary school, visited Dashijie, or Shanghai Great World, and Jinshanzui Fishing Village with her family during the holiday.

The boy would have had to undergo a 14-day quarantine if the family had traveled out of Shanghai because of his school’s requirements.

"I have not been to the Shanghai Great World for decades, and it is a nostalgic trip for me as well," said Hu.

"If there was no pandemic, we may have traveled far, but everything depends on the mood rather than destination," she said. "My son is interested in learning the intangible cultural heritage at Shanghai Great World and the fishing history of villagers at Jinshanzui."

A group of 15 took part in a four-hour walking and photography tour organized by the Shanghai Spring Tour during the holiday, and they captured the sunrise at Lujiazui and experienced the glamour of Beijing Rd E. and the east extension of Nanjing Rd E.

"My grandson, 12, and I both like photography, and it is meaningful to capture the city on camera on National Day and it is also a commemoration on the special day," said one of the group surnamed Gu.

"On sunny or cloudy days during the holiday, we receive 10,000 to 20,000 visitors daily," said Zhang Zhe, a staff member at Chenshan Botanical Garden in Songjiang District.

"The figures have rebounded to the same before the pandemic," she said.

"Residents and tourists are enthusiastic about traveling during the holiday, and we host lawn concerts, attracting many families with children.” 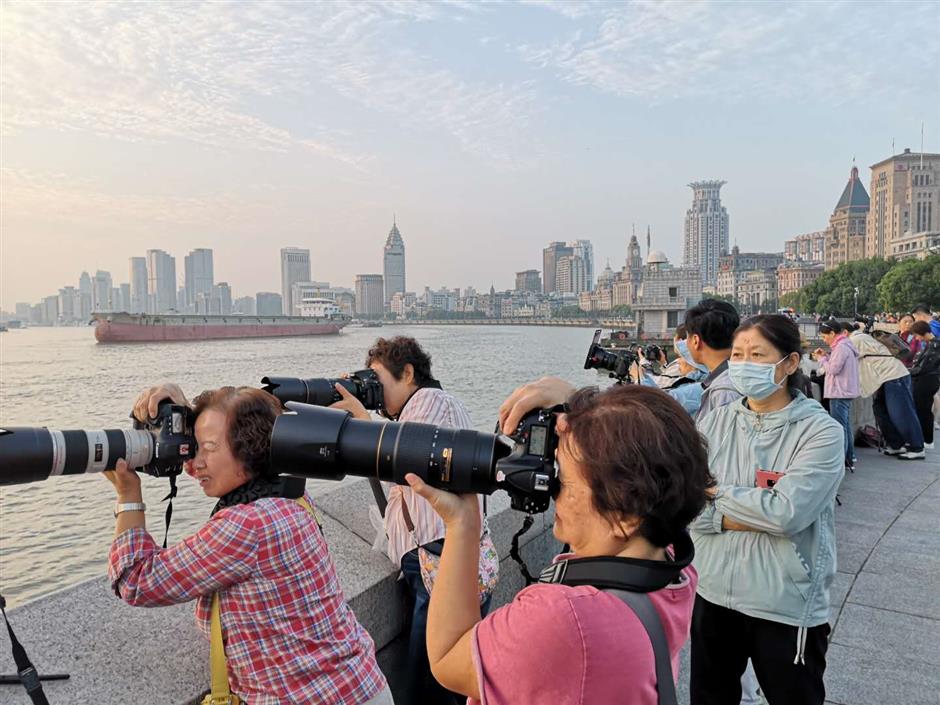 Photographers capture views from the Bund during the holiday. 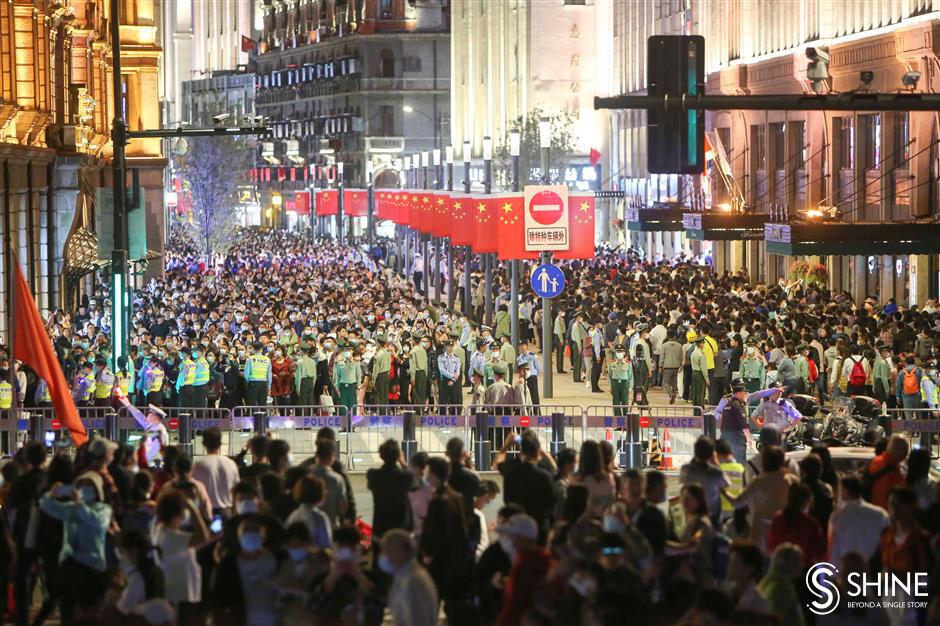 Before the holiday, the 50 percent restriction on visitor numbers at A-level tourist attractions in China was eased to 75 percent, and Wang said that had boosted recovery of the tourism industry.

The park has extended its hours from 8:30am to 8:30pm during the holiday.

"We are also taking strict measures such as temperature measurement, health QR code check and frequent sanitation to ensure a safe trip for visitors," she said. "Visitors are encouraged to purchase tickets online in advance."

More than 150 major tourist attractions across Shanghai received 4.19 million visits from tourists and residents over the first four days of the holiday, up 3 percent from the same period last year, according to the Shanghai Administration of Culture and Tourism.

In the first three days of the holiday, the occupancy rate of hotels in the city hit 70 percent, a growth of 13.5 percent from the same period last year. 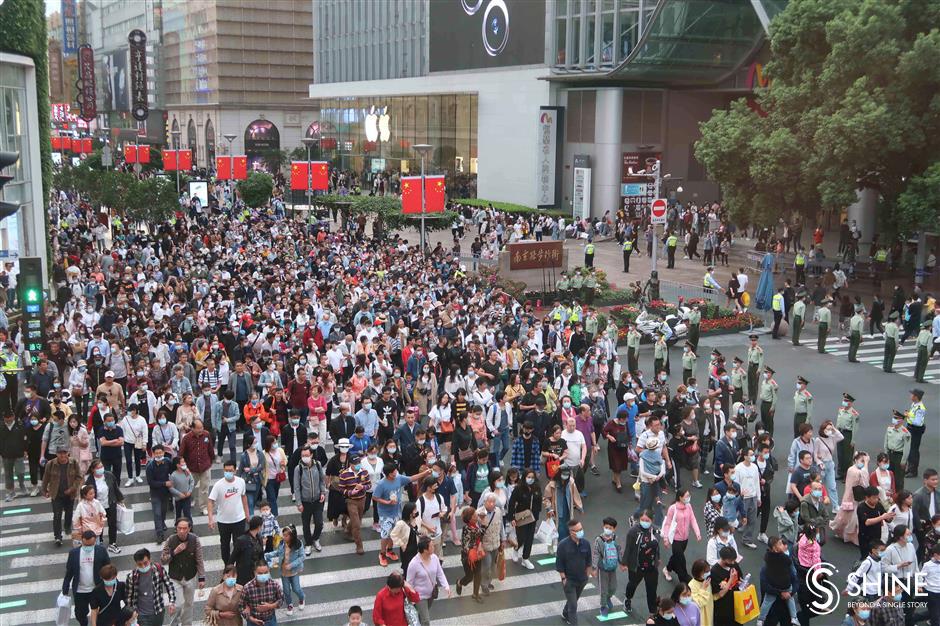 Nanjing Road Pedestrian Mall is a popular attraction during the holiday. 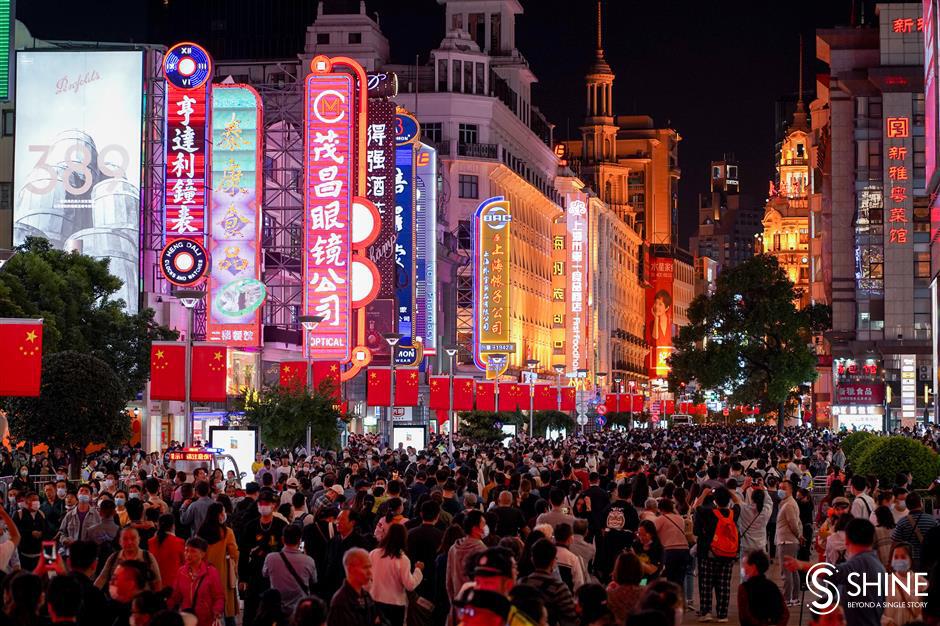 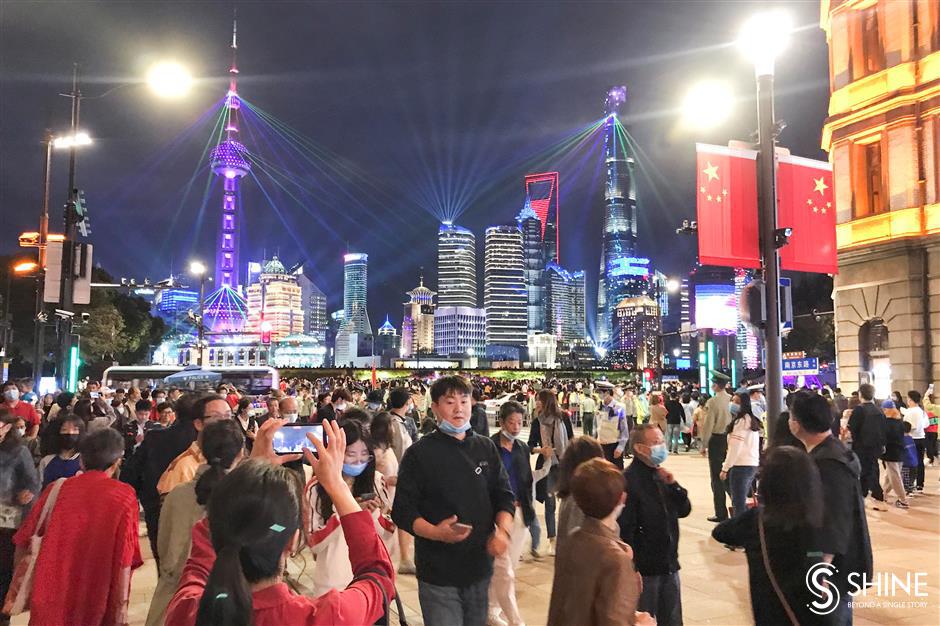 Crowds at the east extension of the Nanjing Road Pedestrian Mall during the holiday.

On Tuesday, the sixth day of the holiday, the Bund had 265,200 visits, and the Yuyuan Garden scenic area 82,300, up 15.6 and 219.4 percent respectively from the same period last year, according to the administration.

Shanghai-based online travel operator Trip.com said its bookings of admissions to tourist attractions had doubled over the four days from the same period last year, a record.

It said it was a long-awaited tourism boom which the industry had been expecting since the pandemic.

The cities of Zhengzhou, Lanzhou, Haikou, Suzhou and Harbin had witnessed an over 50 percent increase, it said. 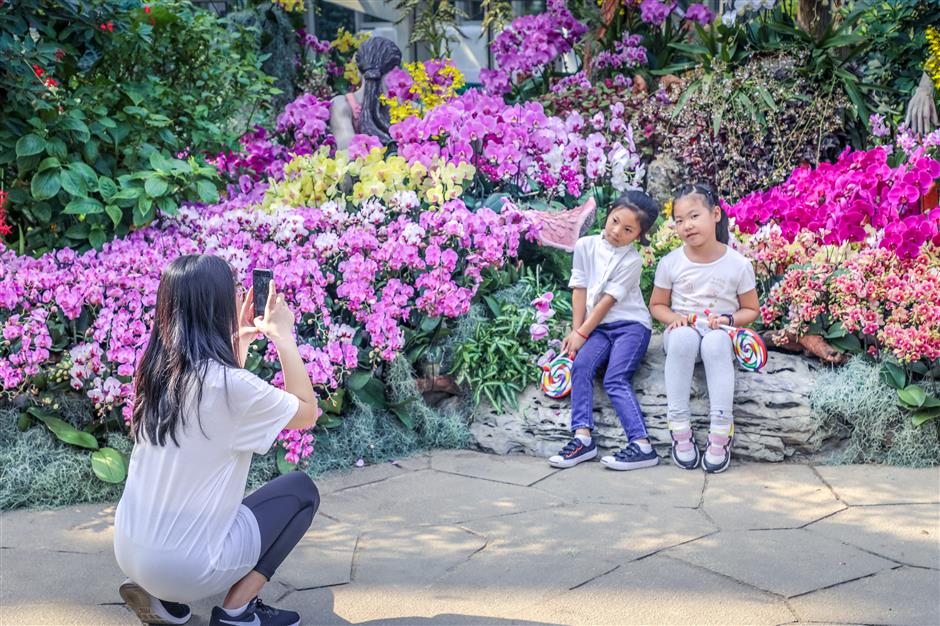 Children pose for a picture amid the flowers at Chenshan Botanical Garden.

Some Shanghai residents chose to travel to other destinations in China.

Wan Lechun, who is in her 20s, visited southwest China's Yunnan Province during the holiday.

"I usually went overseas during the long National Day holiday and niche destinations are my favorite," said Wan, who was in Kenya during last year's holiday.

"This year, it is different due to the pandemic," said Wan, who embarked on a 10-day trip with another girl on September 26. They visited Dali, Lijiang and Shangri-La.

"The landscape is very impressive, and our driver, a local, drove us on a mountainous route which others don't know," she said.

"Before the holiday, there were not many visitors, but since it started, we encountered many more people when we stayed three nights in Lijiang.

"We had to cancel our visit to Yulong (Jade Dragon) Snow Mountain after cable tickets were sold out as we did not book in advance," she said.

"The travel experience was very pleasant all in all, and I found that the domestic scenery is more beautiful than I imagined," she said. "The journey changed my stereotype impression that staying in China during the holiday is boring."

Echo Li, another Shanghai resident, visited Yangzhou in neighboring Jiangsu Province, during the holiday and was stuck in crowds. The city is noted for its zaocha, or Yangzhou-style breakfast, enjoyed in a slow-paced and laid-back style.

"There are too many people, and it is bearable at scenic areas, but it took two to three hours queuing for local time-honored restaurants," said Li.

"I was told that I need to queue as early as 6am for zaocha, but it is too early for me.

"I spent most of the time seeking food," she joked. "But it was quite a unique travel experience."