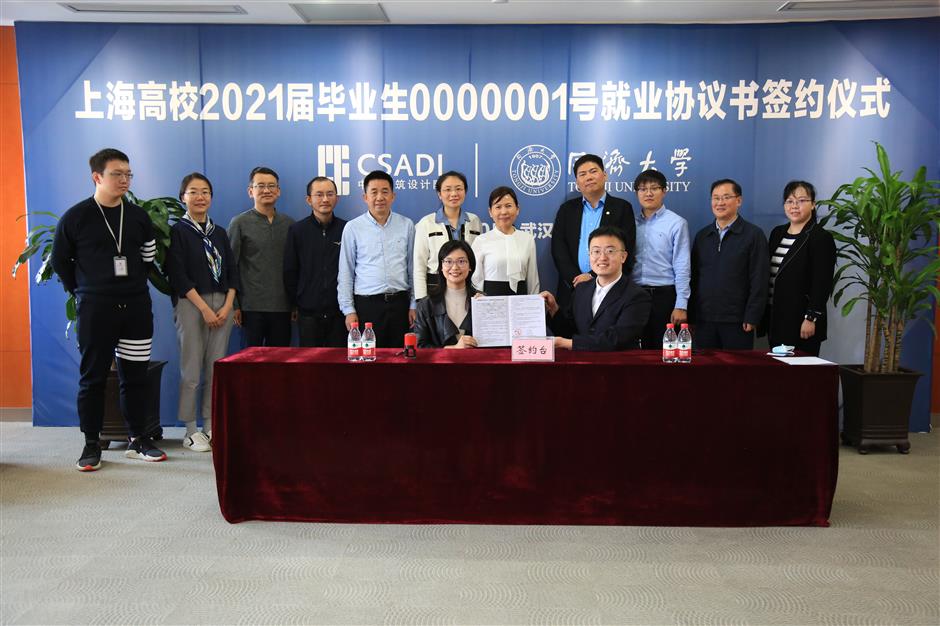 Li Chong (front right) with his employment agreement from the Central-South Architectural Design Institute Co in Wuhan on Monday.

Li Chong, a master student at Tongji University College of Civil Engineering, became the first graduating student from colleges in Shanghai to get an employment agreement on Monday.

He is being employed by the Central-South Architectural Design Institute Co, which designed 38 facilities for fighting the COVID-19 pandemic in a month, including the Leishenshan makeshift hospital. The company had also led and participated in drafting multiple guidelines for designing temporary hospitals specialized in respiratory diseases.

“After the outbreak of the pandemic, I became determined to return to my hometown of Wuhan after graduation to do something for it,” said Li. “The design company had done a great job in anti-pandemic efforts, so I made it my first choice for a job.”

He took an internship with the company during the summer vacation and performed so well that he was honored by the company as one of the outstanding members in its “Creative Star” summer internship program.

As employers recently began recruiting students in their final year, Li immediately submitted his resume to the company, which gave him an offer without interview due to his performance during the internship.

The institute is a long-term partner of Tongji in talent cultivation and technology development. Many of its top executives are alumni of the university, including its general manager Yang Jianhua, chief designer of the Leishenshan hospital.Tongji was the first stop for the company’s campus recruitment this year.