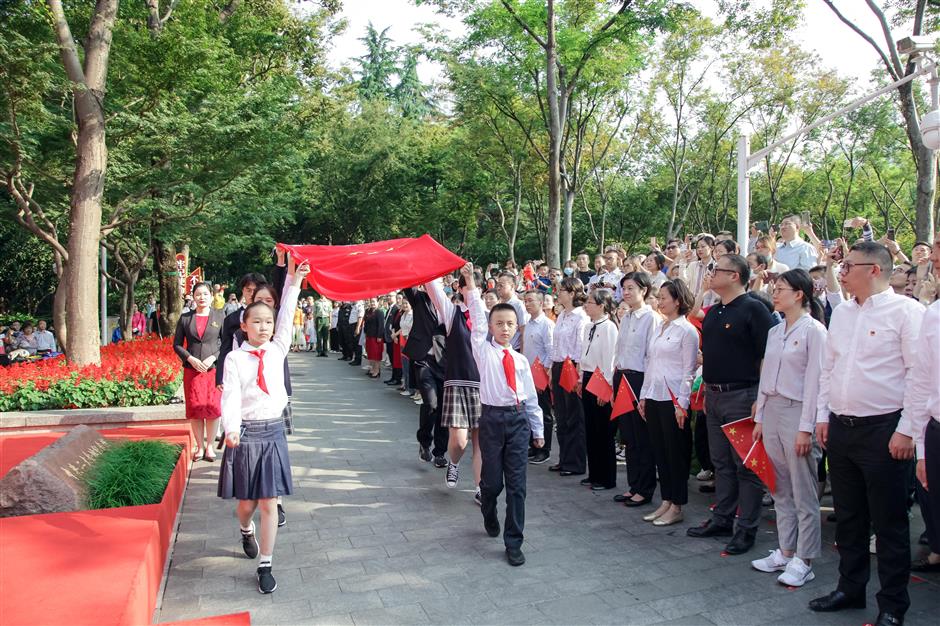 Children carry the national flag at a special flag-raising ceremony held outside the memorial of the Second National Congress of the Communist Party of China in Jing’an on October 1 to celebrate the 71st anniversary of the founding of the People’s Republic of China, witnessed by more than 200 people, including local students, residents and office workers.

On October 1, more than 200 people celebrated National Day at a special flag-raising ceremony outside the memorial of the Second National Congress of the Communist Party of China.

Local students, residents and office workers saluted the flag and sang the national anthem to celebrate the 71st anniversary of the founding of the People’s Republic of China.

“When the Chinese flag was raised, a strong sense of pride filled my heart,” said Gu Yangyang, one of the flag-bearers.

The 12th-grade student from Shanghai Shixi High School said it was a powerful feeling. “Being part of the flag-raising ceremony was so impressive,” he said. “It made me feel like I live in a great country.” Born and raised in Shanghai, Gu has witnessed different phases of the city’s development.

“l live near Global Harbor, and I saw how this grand shopping mall was built very quickly,” he said. “It reflects the country’s fast-paced development.”

Gu said he hopes to work with technology when he completes his studies.

“The country is eager to develop high-end microchips, and I would like to contribute,” he said.

Yu Anrui, Gu’s classmate, said she had visited the memorial several times, but it was her first time taking part in the flag-raising ceremony.

“It made me better understand the meaning of National Day,” she said. “The country was built on the shoulders of revolutionaries, and we should inherit their spirit and beliefs.”

Following the ceremony, they toured the memorial and learned about the Party from Zhang Liming, former director of the memorial site.

Tang Shuojie of The Kai Kai Group — a Jing’an-based communications firm — said 2020 has been a special year and the event gave her a motivational boost. 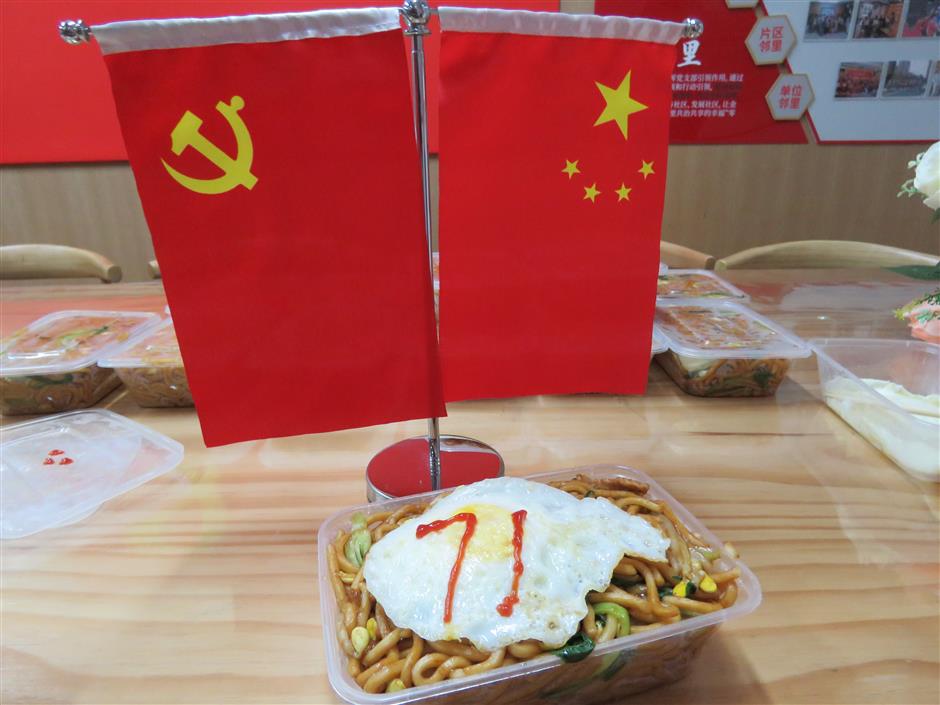 “Usually, we don’t put so many ingredients in a noodle soup, but today is so special,” said Liu Chongliang, the eatery’s deputy general manager. “The poached egg looks like the sun and is surrounded by red braised pork and vegetables, which represents a thriving and prosperous China.”

Daning Road Subdistrict prepared National Day noodles for local elders and neighbor - hood volunteers, including 90-year-old Xu Langsheng whose birthday coincides with National Day. His neighbor Qian Huiying said they’re the most special noodles she’s ever eaten with a flavor she’ll remember for the rest of her life.

“I’m so proud of my country because we’ve done a great job in the fight against the coronavirus,” said Yang Chuanchun, who joined the Party more than 60 years ago. “I hope I can eat National Day noodles every year.”

During the eight-day Golden Week holiday, red revolutionary sites in Jing’an were teeming with visitors.

The most popular was the Sihang Warehouse, which became a hotspot following the release of the Chinese war epic “The Eight Hundred.”

The blockbuster movie profiles the Battle of Shanghai in 1937 and the fierce four-day fighting between Chinese and Japanese troops at Sihang Warehouse along the Suzhou Creek.

The memorial — located at 21 Guangfu Road — displays remnants of the battle at its west wall, where eight bomb and more than 400 bullet holes remain.

At the memorial, the battle is “reenacted” with life-size figures using 3D holographic projections and audio effects, enabling visitors to experience the harrowing sensation of “stout resistance” and “raging flames.”

On October 6 and 7, a group of middle school students experienced an immersive “red” class where they pretended to be soldiers fighting in the battle, taking orders from Lieutenant Colonel Xie Jinyuan via 3D holographic projection and writing farewell letters to loved ones.

On October 16, more than 20 Jing’an office workers took part in the finals of a dubbing contest held by Beizhan Subdistrict to promote “red” classics and culture. The contestants did voiceovers for characters in “red” films such as “The Birth of New China” and “Beginning of the Great Revival.” 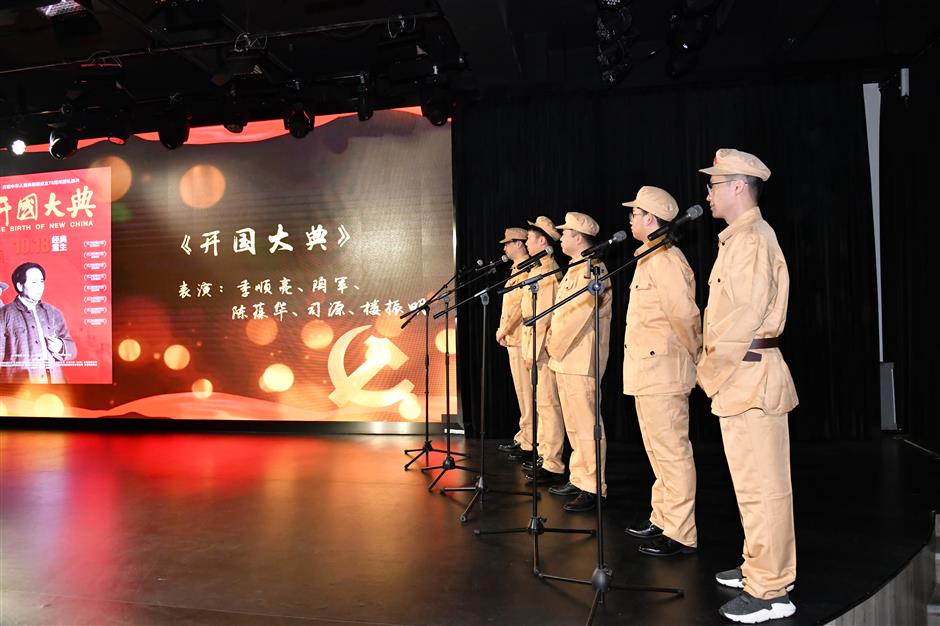 Contestants participate in the finals of a dubbing contest held by Beizhan Subdistrict to promote “red” classics and culture.